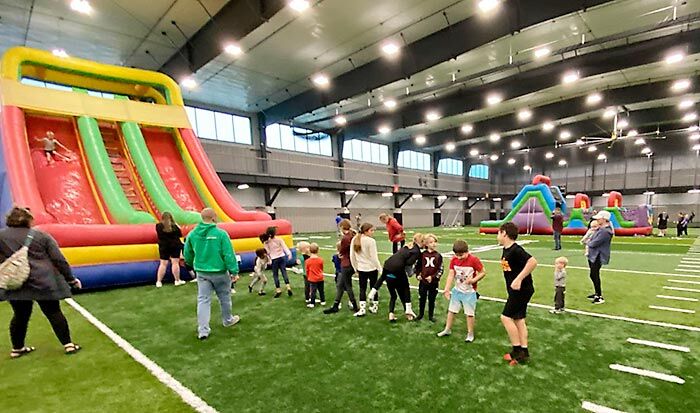 ONE OF THE most fun activities for children attending the appreciation evening was bouncy house attractions, including this slide. 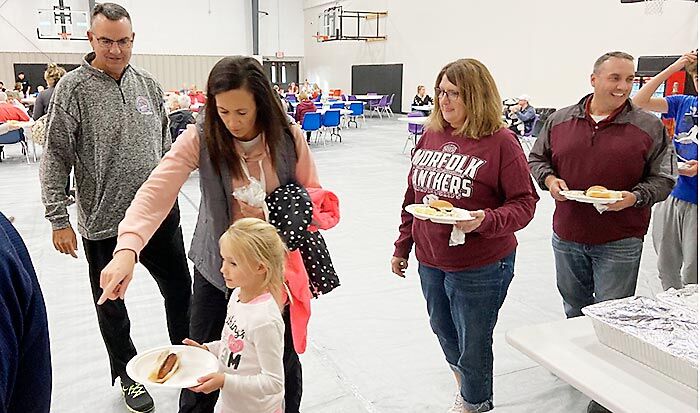 RANDY HAGEDORN (left), Norfolk Family YMCA executive director, was among the staff serving and visiting with members during the annual appreciation supper on Monday evening.

ONE OF THE most fun activities for children attending the appreciation evening was bouncy house attractions, including this slide.

RANDY HAGEDORN (left), Norfolk Family YMCA executive director, was among the staff serving and visiting with members during the annual appreciation supper on Monday evening.

That’s one of the reasons why the YMCA has grown into the second largest in Nebraska, with a membership that has increased to 10,700 — more than one of every three people in Norfolk.

About 800 of those members enjoyed a picnic dinner with hot dogs and hamburgers Monday evening in one of the new gyms in the latest addition. The sounds of basketballs dribbling behind a curtain reminded everyone that fitness remains a priority at all times.

“If it wasn’t for the great donors, board and all our members, we would not be able to survive,” said Randy Hagedorn, executive director of the YMCA.

Hagedorn said the COVID-19 pandemic was a challenge, but with the support of staff, instructors and members, people followed the rules and safety was maintained.

So Monday evening provided a reason to celebrate and relax.

“This is just a little something for us to say thank you for getting us through this,” Hagedorn said.

Doug Burkink, one of 22 board members, said the YMCA fills a big need in the community and he enjoys serving on the board.

Burkink was helping to serve meals during the appreciation event.

Burkink said he always enjoyed going to the YMCA and began serving on the board when his father, Jeff, stepped down. That’s been at least 10 years ago.

Burkink said the YMCA always seems to step up when people in the community identify a need. That’s one of the reasons why it has continued to grow.

Part of the need is a 3-on-3 basketball league that begins next week and runs for four consecutive Mondays. This is at least the 12th year for the league, which is for fourth graders through eighth graders and features 80 basketball teams from all over Northeast and North Central Nebraska.

Although 80 teams is the biggest the league has been, nine teams had to be turned away because there weren’t enough gyms.

“We’ll have 16 games going on at a time,” Hagedorn said. “Every basket will be used.”

Hagedorn said the YMCA also would be announcing plans in the coming weeks for a couple of significant projects that the majority of members will be able to take advantage of. The details on those projects are being completed now.

And while 10,700 members sounds like a lot, the YMCA needs to maintain that many members to remain viable.

“Our base had to be over 10,000 just in order to pay bills and do operations,” Hagedorn said. “It’s important for us to have that big of a group and so we hope people will stay with us.”