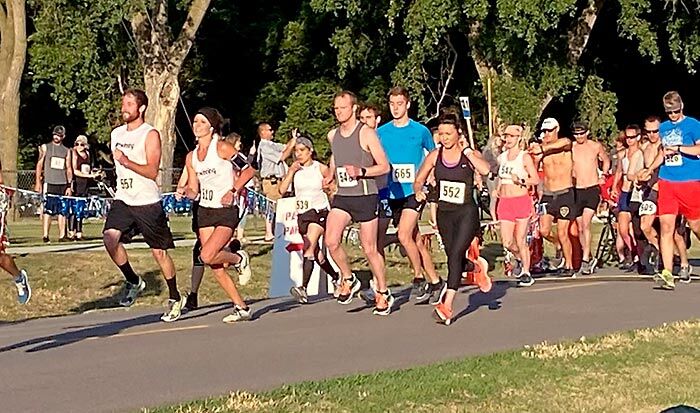 THE HALF MARATHON runners were the first group to leave on Saturday morning. Big Bang Boom assisted with fireworks during the morning to help inspire runners as they competed. 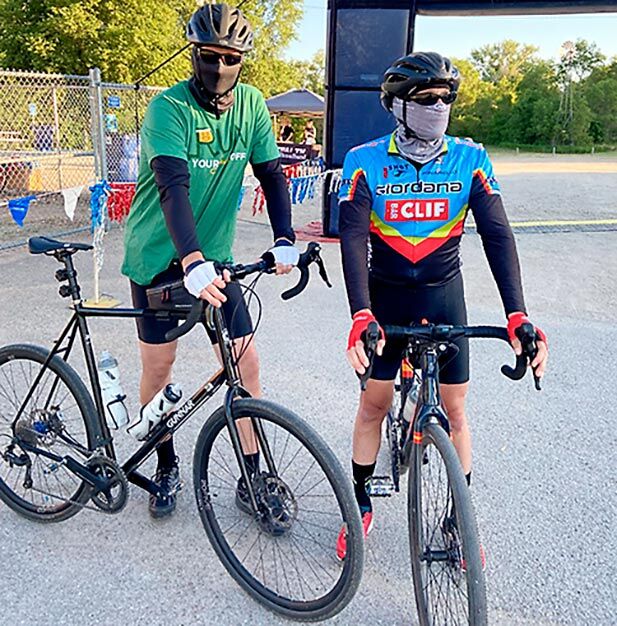 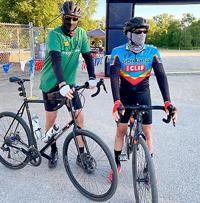 MATT SHERIFF (left) and Larry Wenzl were among the volunteers assisting with the races Saturday morning. Sheriff led the 10K runners and Wenzl the 13.1 mile runners on bicycles, showing them the course to follow. 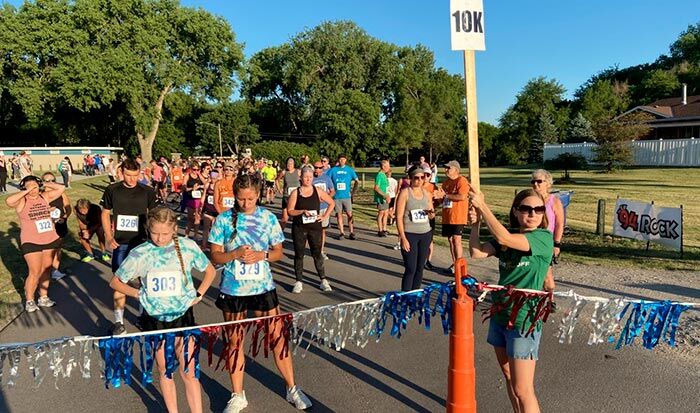 JODI RICHEY, a volunteer who has helped out at every Laugh-and-a-Half Marathon since it began 11 years ago, holds a sign showing 10K runners where to line up on Saturday morning at Ta-Ha-Zouka Park.

THE HALF MARATHON runners were the first group to leave on Saturday morning. Big Bang Boom assisted with fireworks during the morning to help inspire runners as they competed.

MATT SHERIFF (left) and Larry Wenzl were among the volunteers assisting with the races Saturday morning. Sheriff led the 10K runners and Wenzl the 13.1 mile runners on bicycles, showing them the course to follow.

JODI RICHEY, a volunteer who has helped out at every Laugh-and-a-Half Marathon since it began 11 years ago, holds a sign showing 10K runners where to line up on Saturday morning at Ta-Ha-Zouka Park.

So were many of the volunteers who helped to make sure the roughly 275 competitors had a pleasant experience in one of the distances offered.

“This year seems like it is all brand new all over again, even though we have been out on this course for five years,” said Lydee Jo Krueger, co-race organizer.

“We didn’t do it a year ago, so now it kind of seems like, ‘Where are we going again?’ ” Krueger said with a laugh.

With the COVID-19 pandemic canceling last year’s in-person race, some runners were competing in their first race in more than a year. While that might make for some tighter fitting T-shirts during preparations, there were strong efforts in the 13.1-mile half-marathon, 10K, 5K and kids fun run.

Complete results were expected to be available by Monday afternoon on the Laugh-and-a-Half website. The course began in Ta-Ha-Zouka Park and included the Cowboy Trail and an asphalt county road.

Krueger, who is in her fourth year as co-director, said there were between 40 and 50 volunteers who worked behind the scenes. Their duties included clipping lanyards on medals, sitting at water stations, handing out packets and helping with the meal and refreshments for racers afterward.

“There’s a lot of different roles from the EMTs to fire and rescue to the police department,” Krueger said. “It’s a community event, that’s for sure.”

With last year’s race run virtually because of the pandemic, there was greater interest this year in having the race in person, Krueger said.

This year’s numbers were up significantly over last year, but the 275 runners were down from the more than 400 who ran in 2019 — the last live race.

Virtual racing was offered again this year for everything but the kids’ mile fun run. Virtual results had to be completed between June 11-17.

The course on Saturday featured five water stations, but people were encouraged to bring their own water bottles. The first five years, the 13.1-mile course went around part of downtown and then northeast of Norfolk and looped around twice.

Among the volunteers this year were Matt Sheriff of Norfolk and Larry Wenzl of Norfolk.

Sheriff led the 10K runners and Wenzl the 13.1-mile runners on bicycles, showing them the course to follow.

“I ran it one year and I think this is the third year I’ve been leading runners,” Wenzl said. “You have to keep looking back to make sure they can see you. Then also, you have to be careful because on the way back, you have other runners on the course from the shorter events, so you have to weave in between those runners. It works best if everybody keeps to the right.”

This was Sheriff’s initial year helping on the bike.

“I think there’s some positive nerves for me,” Sheriff said before the race. “I think this is a good event, coming off COVID. I think everybody wants to get out and just have some fun. Everybody has been cooped up for so long.”

Wenzl said the finish is fun because the runners usually pick it up. Sometimes they can get to 12 or 13 mph, he said.

“We can get up to pretty good speeds on the bike — 20 or 25 mph — that they can’t get running — unless Usain Bolt happens to be here today,” Wenzl said.

“It’s (running) really free,” she said. “All you need to do it is get a good pair of shoes. Then you can run, walk or jog for better health.”

Krueger said Faith Regional Health Services is a good sponsor because it works to prevent stroke and heart disease. Other major sponsors include 94 Rock, Eagle Distribution, Target, the Norfolk Lions Club and the Norfolk Area Sports Council, along with many businesses.

Others like the Lower Elkhorn NRD, Norfolk city parks and Nebraska Game and Parks keep the course trees trimmed and grass mowed, she said.

“We are lucky to have one of the most beautiful courses. You get out on the trail and you go over that bridge and it is scenic,” she said.

“The one thing we would like is to have more people come on out and cheer on the runners,” she said. “It gets pretty hot by the time you are halfway to Battle Creek. They appreciate the encouragement.”

WINNEBAGO — The highway that spills into Winnebago is lined with miles of construction. In the tribal village, cones line nearly the entire stretch from Twelve Clans Unity Hospital past Ho-Chunk Plaza and farther beyond.

Crofton business celebrates 75 years of ‘just what the doctor ordered’

CROFTON — While on a New Year’s Eve outing in 1946, Dr. Joseph Wiebelhaus made a purchase here that set a new course for his family for generations.

What started on a “whim and a prayer” more than two decades ago is now a permanent exhibit at Elkhorn Valley Museum in Norfolk.