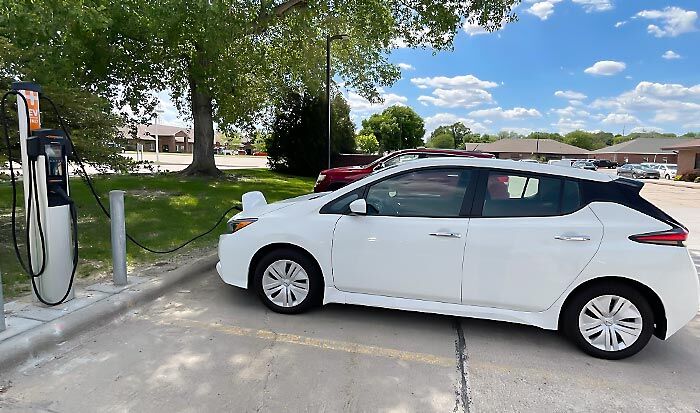 THE CITY’S Nissan Leaf and charging station is shown outside the city offices at 309 N. Fifth St. The vehicle, charging station and installation of the station were paid for in part through grants. 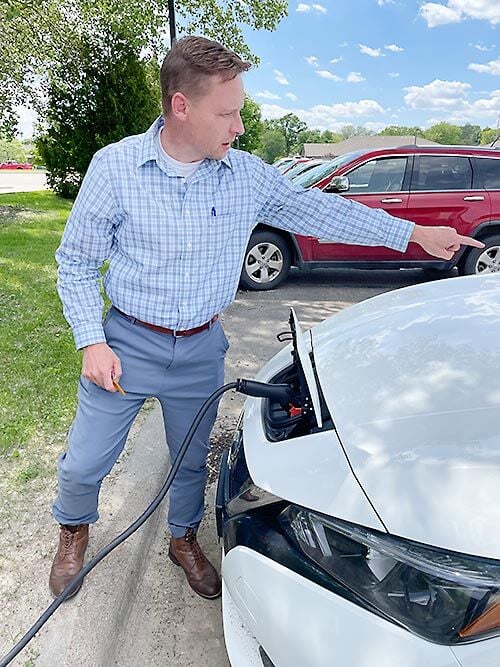 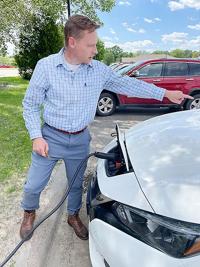 LYLE LUTT demonstrates how the city’s electric vehicle is charged.

THE CITY’S Nissan Leaf and charging station is shown outside the city offices at 309 N. Fifth St. The vehicle, charging station and installation of the station were paid for in part through grants.

LYLE LUTT demonstrates how the city’s electric vehicle is charged.

No, that’s not a gas pump in the city office parking lot.

But the electric vehicle charger at 309 N. Fifth St. is one of several in Norfolk that are helping vehicles run, with more on the way.

Electric vehicle chargers can be found at three locations in Norfolk: the city offices, the Nebraska Public Power Department’s office (1200 S. Chestnut St.) and on Norfolk Avenue near the intersection with First Street.

“This is probably the future, in some capacity,” Lutt said. “Basically, what we’re looking at here is dipping the city’s toe in the electric vehicle pool.”

The vehicle, charger and charger installation were all paid for in part by a grant from the Nebraska Community Energy Alliance, Lutt said. He estimated the total cost to the city was between $25,000 and $30,000.

There’s no cost for the city to recharge its vehicle at the charger outside the city offices, Lutt said. Anyone else looking to charge up their vehicle has to pay, though.

In Norfolk, it costs $2 for the first four hours and then $1 per hour after that to use one of the charging stations, Lutt said.

The city gets 80 cents for every dollar spent at its charging station, Lutt said.

“It’s not a revenue source,” he said, but he added that charging stations are an important component of infrastructure for anyone driving an electric vehicle.

“I think we can all see the marketplace is changing in terms of the transportation sector, and while it won’t change overnight, it is clearly going to change,” Moenning said. “I think it’s only prudent that we as a community be prepared for that. That explains our interest in establishing electric vehicle infrastructure to help accommodate those motorists.”

Lutt said it would take a vehicle anywhere from six to eight hours to fully charge using the city’s station.

NPPD operates the chargers at its office and also the one on First and Norfolk, which is on city land. The charging station at it office can do a full charge in around 30 minutes, said Cathy Kathol, retail accounts manager for Norfolk.

Kathol said the NPPD station has gotten a lot of use. The city’s station opened in early May, and so far three people have used it besides the city, Lutt said.

The city has received a second grant for a vehicle and charger, Lutt said, but he’s not sure when the new charger will be installed yet and the city is still trying to find the best location for it.

“We want to make sure we get it down in the right place and make the right decision,” he said.

Kathol said she thinks there is a lot of interest in electric vehicles.

“Part of this charging thing is getting ready for the future,” she said. “Electric vehicles are probably going to get here sooner rather than later.”

MADISON — Farmers and ag producers should get ready for a consumer-driven economy, with consumers wanting more say in how their food is produced.

Johnny Carson’s 1939 Chrysler Royal is home again — at least for a while.

Improvements to Johnson Park and the riverfront redevelopment project are inching closer to completion. To mark this, the city held an open house Tuesday night.