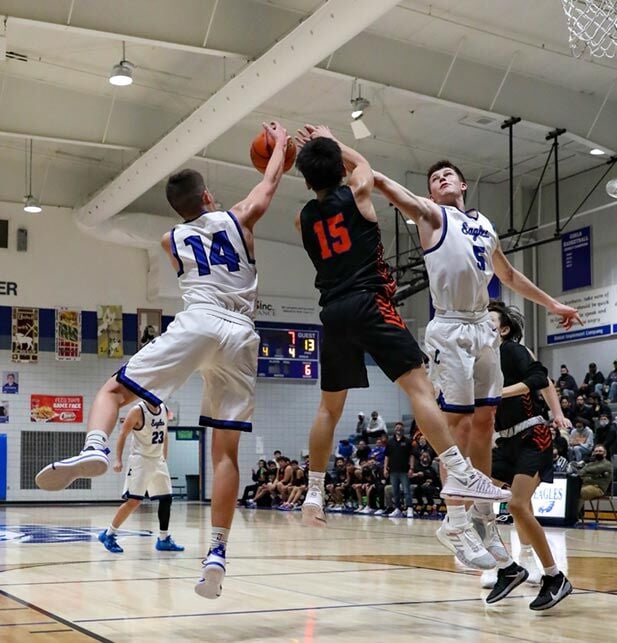 Grant Colligan (14) and Cort McKeown (5) from LHNE fight for a rebound with Zander Lovejoy from Walthill. 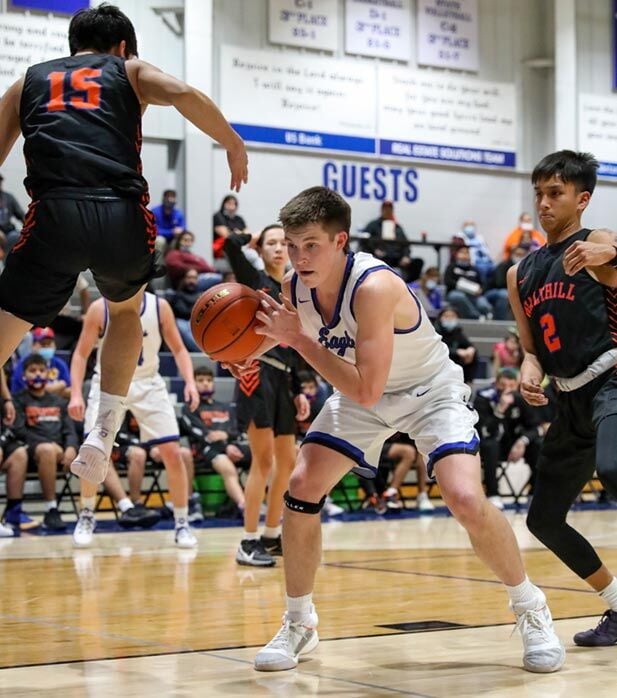 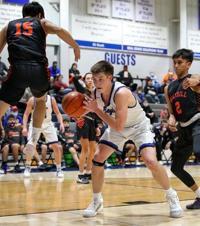 Cort McKeown waits for the shot against Zander Lovejoy and Kallen WhiteEyes from Walthill. 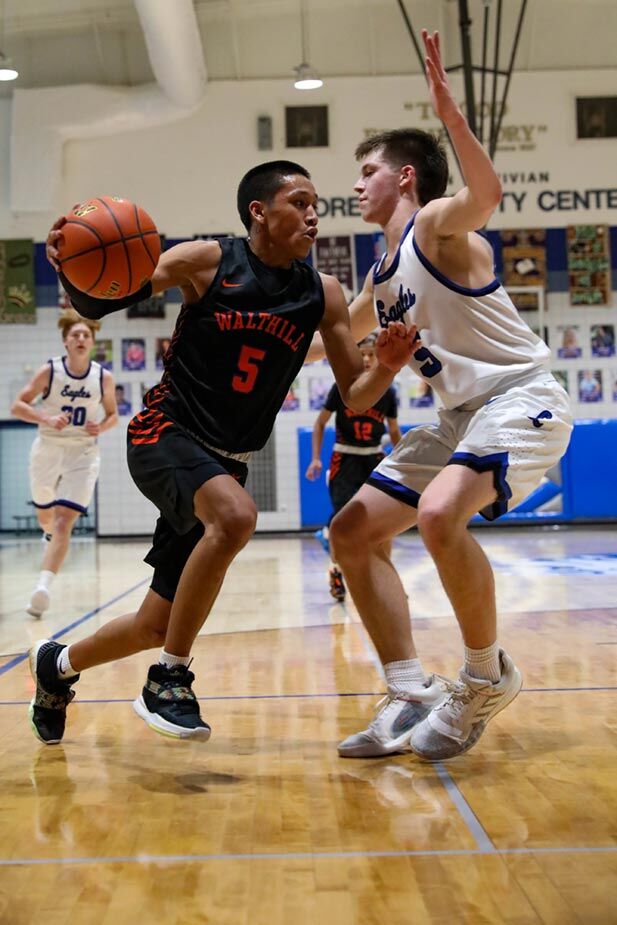 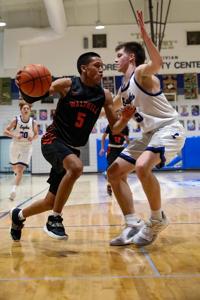 Jalen Merrick from Walthill attempts to drive past Cort McKeown From LHNE. 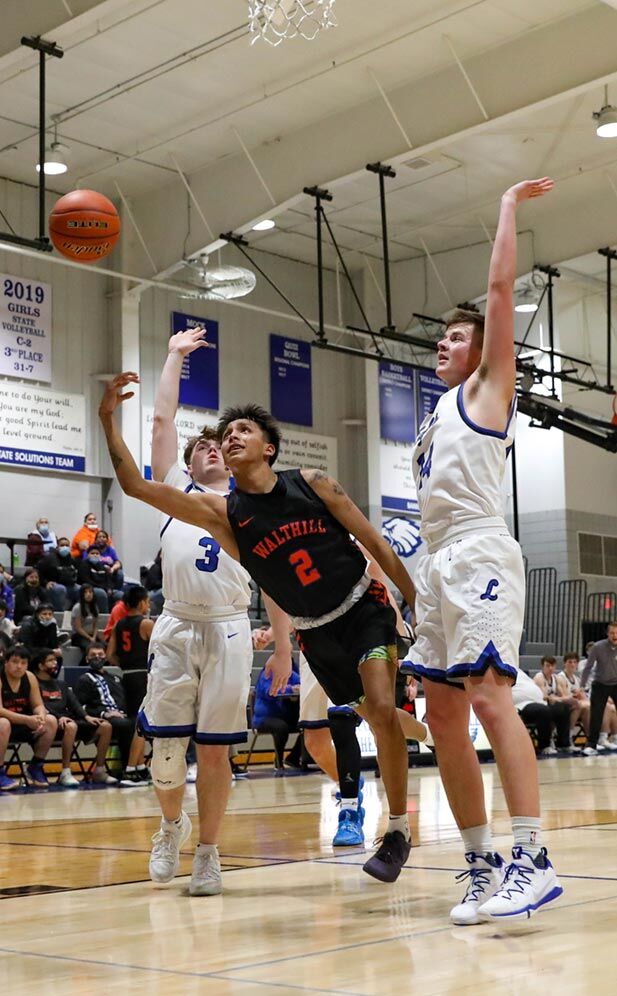 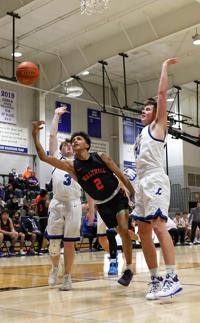 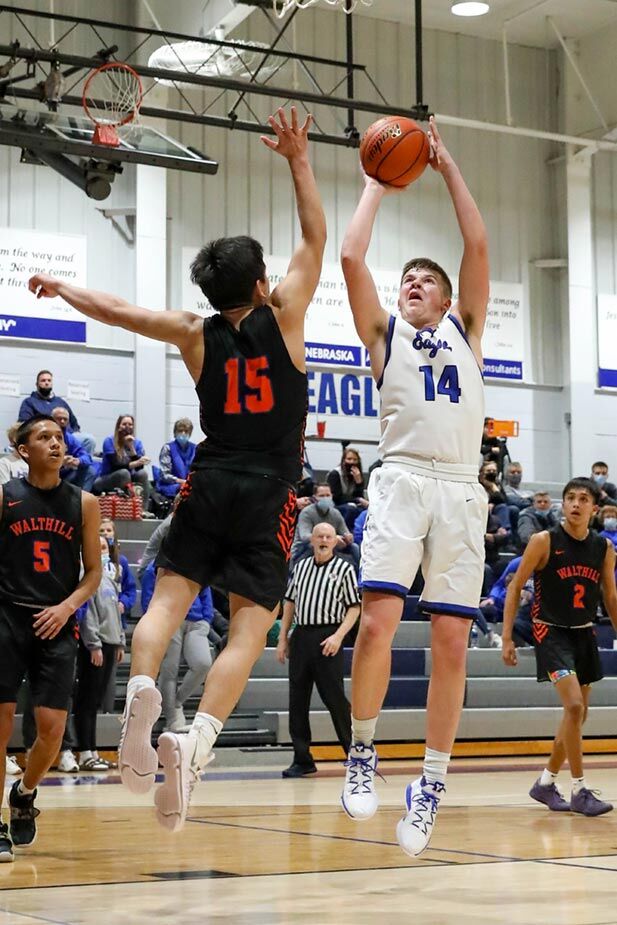 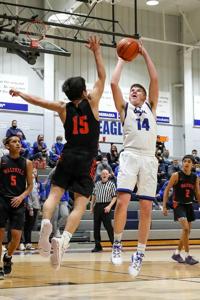 Grant Colligan (14) and Cort McKeown (5) from LHNE fight for a rebound with Zander Lovejoy from Walthill.

Cort McKeown waits for the shot against Zander Lovejoy and Kallen WhiteEyes from Walthill.

Jalen Merrick from Walthill attempts to drive past Cort McKeown From LHNE.

After the Walthill boys began the second half on a 16-5 run to cut the deficit to two points, Lutheran High Northeast responded with a 16-2 run of its own over the next 6½ minutes to seal its 62-47 victory.

The Blujays run a fast-paced, 3-point shooting offense that puts a lot of pressure on opponents. It can be easy for teams to hang their heads when their 3-point barrage is happening, but coach Kenny Blank of the Eagles was happy that his team was able to stay focused, stop the run and start one of their own.

"We knew coming out of half that they were going to bring that energy and start being aggressive. They made that run like we knew they would, but credit to our guys. We stayed together and made a run back at them to keep that lead."

The Eagles began the game on an 18-3 run. Ten of those points came from senior Grant Colligan, who was hitting from outside the arc and inside the lane, and Blank said his shooting opens everything up for them offensively.

"He's our shooter. Teams have to respect that, so it opens things up inside. Cort (McKeown) was able to get inside because if they collapse down, Grant's going to shoot the 3, so he really spaced the floor for us on the offensive end."

Lutheran High held Walthill to just three points during the second quarter and took a 29-16 lead into the second half.

The Eagles have been searching all season for a signature win. Blank said their last couple of weeks of practice led to that Tuesday night, and it will help them the rest of the way.

"We haven't had that signature win of the year. This is a good basketball team in Walthill. They came in at 9-1, so I thought we made some improvements in practice defensively and efforts on rebounds. I thought tonight we were tough when they made those runs, and we were able to stay together and make our own run back. We got that big win off our backs, so it gives us some momentum going into the home stretch of the season."

The Eagles were led by Colligan's 19 points and McKeown's 16 points.

It was an aberration game for a Walthill team that averages more than 77 points per game. Its lowest scoring output of the year until this game was 61 points against Winnebago. The Blujays shot only 3-11 from the free throw line and committed 32 fouls. Coach John Parker of Walthill said the Eagles’ size advantage combined with their inability to shoot Tuesday led to the loss.

"We're usually a second-half team. The first half, we only scored 16 points which is not us. We're usually hitting our outside shots, and none of them were falling at all. The start of the third quarter, we came out firing, which is how we should be, but give it to Lutheran High. They're an excellent defensive team. They're tall and lengthy, and they got to us."

Parker's team also follows the "live by the 3, die by the 3" mantra. Even when his team is down double digits, he said it's what they do, and the Blujay shooters just have to shoot their way out of the slump.

"It's our bread and butter. We run and gun. That's our style of basketball. Our guys aren't very tall. Our tallest guy is about 6-foot, so the best thing for us to do from a coaching standpoint is to run and gun. We've got a lot of shooters, and our shots just weren't falling through."

The Blujays are ranked in Class D. With a close loss against Winnebago and a signature win against Wakefield, they'll look to make the state tournament and beyond, which Parker said has always been their goal.

"Right now, it's hard to say, but I'm pretty sure we can punch our ticket to state. That's our goal. We set the goal at the beginning of the season to make it to the state (tournament) and the championship, and that's what we play for."

The Blujays were led by Jalen Merrick, who scored 13 points.

Postgame: Brahmer on fire in Bluejays win over NC