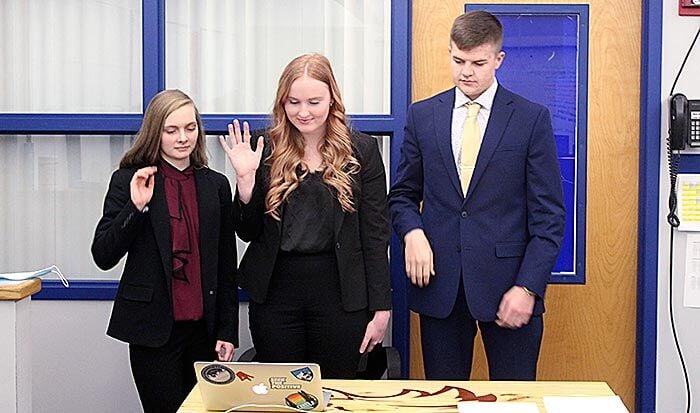 JUNIOR MADDIE Bryant (from left), senior Chloe Bitney and senior Grant Colligan are sworn in as witnesses. The three are part of the Lutheran High Northeast mock trial team, which advanced to the Nebraska State Mock Trial competition this week. 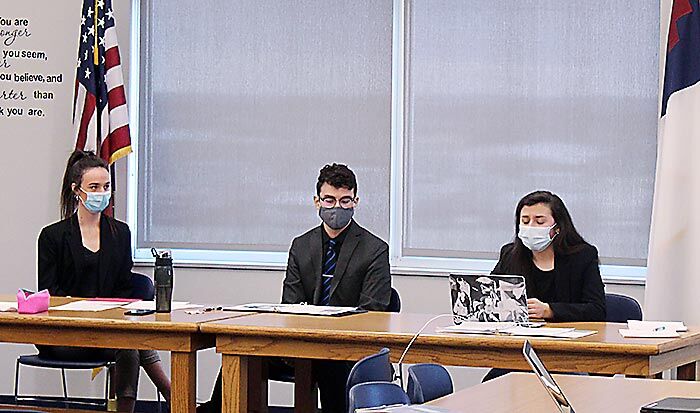 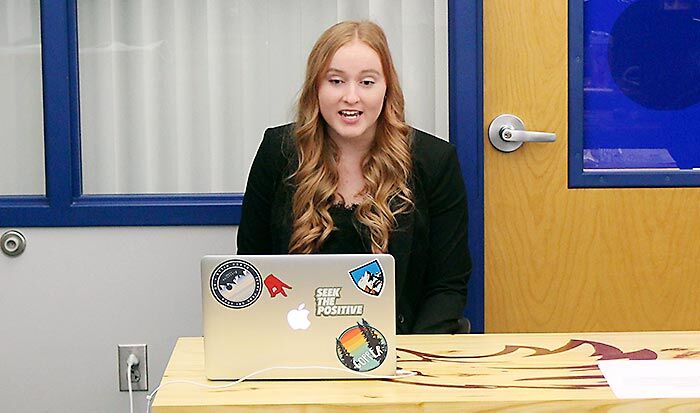 LUTHERAN HIGH NORTHEAST senior Chloe Bitney speaks on the stand answering questions virtually. The school’s mock trial team had to compete in the regional and state competition through Zoom because of COVID-19.

JUNIOR MADDIE Bryant (from left), senior Chloe Bitney and senior Grant Colligan are sworn in as witnesses. The three are part of the Lutheran High Northeast mock trial team, which advanced to the Nebraska State Mock Trial competition this week.

LUTHERAN HIGH NORTHEAST senior Chloe Bitney speaks on the stand answering questions virtually. The school’s mock trial team had to compete in the regional and state competition through Zoom because of COVID-19.

The school’s varsity mock trial team made it to state for the first time since 2017 after it beat out about a dozen local teams to win the regional tournament.

It was senior Chloe Bitney’s first time participating in the state competition and she said competing through Zoom was far from what she was used to.

“We were less nervous because we don't have a large audience watching us, but it was difficult when people were speaking — sometimes we interrupted each other,” she said. “There were several technical difficulties.”

The competition, hosted by the Nebraska State Bar Association, consists of one civil or criminal case that is distributed to each mock trial team in Nebraska. Students debate the case against competing schools as attorneys and witnesses.

“The challenging part is for (the association) to write a case that doesn’t obviously take one side too much,” said Preston Sunderman, mock trial coach. “It has to be balanced. They write it so either side can make good arguments.”

Sunderman said this year’s case involved a student who was caught with possession of methamphetamine at school. Mock trial members had to prosecute and defend the case, debating whether the student actually owned the meth or if it was placed by his rival for valedictorian.

Lutheran High Northeast has both a varsity and junior varsity mock trial team, practicing four days a week, sometimes two hours at a time. The season starts in October and ends in early March.

And as the regional competition neared at the end of February, the team converged on Sunday nights, too.

During the regional and state competitions, competing teams had 25 minutes to present their side of the case to three judges — one scores the trial, while two score the performance. Then each team has 25 minutes to cross-examine the other. Each team performs multiple rounds.

Temo Molina, a senior member who acted as an attorney, said the virtual format didn’t take away from the mission of the mock trial.

This season’s regional and state competitions were also different because they weren’t at a physical courthouse.

The students were separated to compete virtually in Lutheran High Northeast’s library and computer lab. Sunderman said he and the team’s attorney coach, Shawn Beaudette, wanted the lawyers and witnesses to be in separate rooms to avoid muting or sound feedback with multiple devices on Zoom.

Even though the team didn’t place among the top teams, Sunderman said it was worth it to even make it to the state competition.

“It’s hard — the coaches get attached because we watch the work happen from October to when we start competing in February,” Sunderman said. “The schedule hassles, late nights practicing. ... I know every coach wants it for their team, but you feel good for the kids when you see their work pay off.”