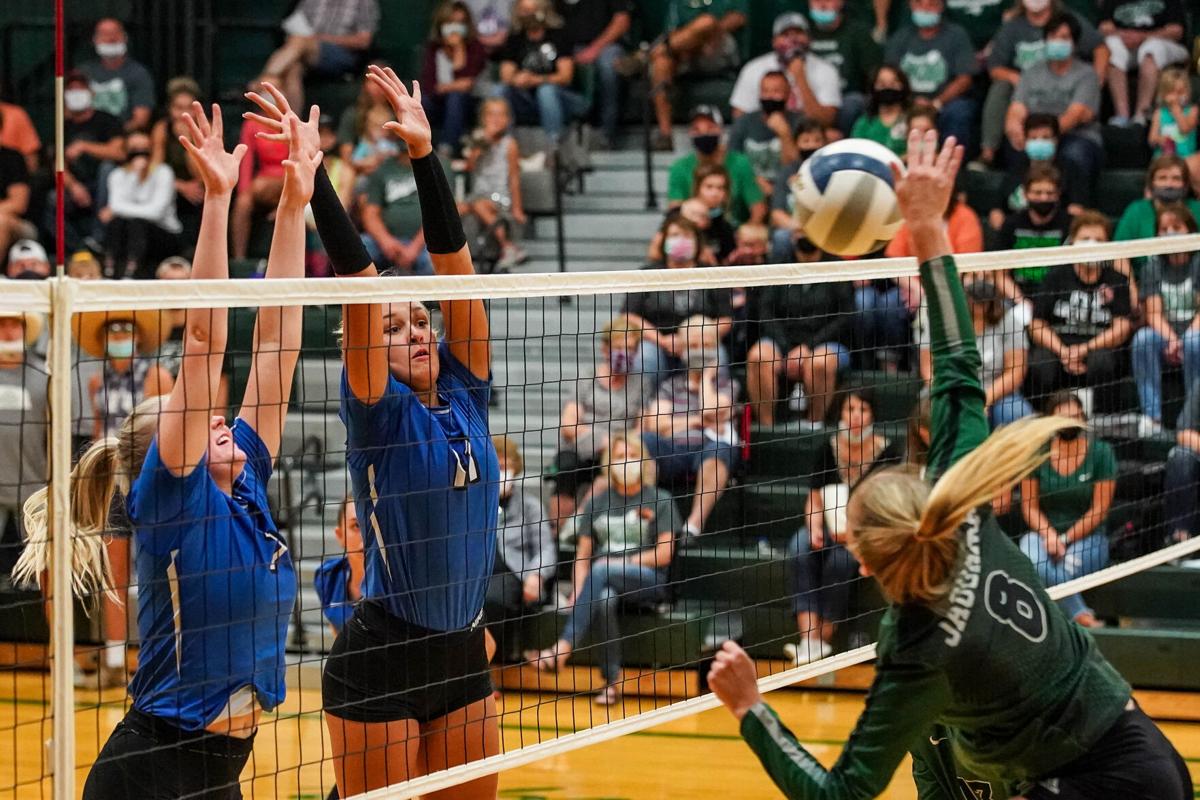 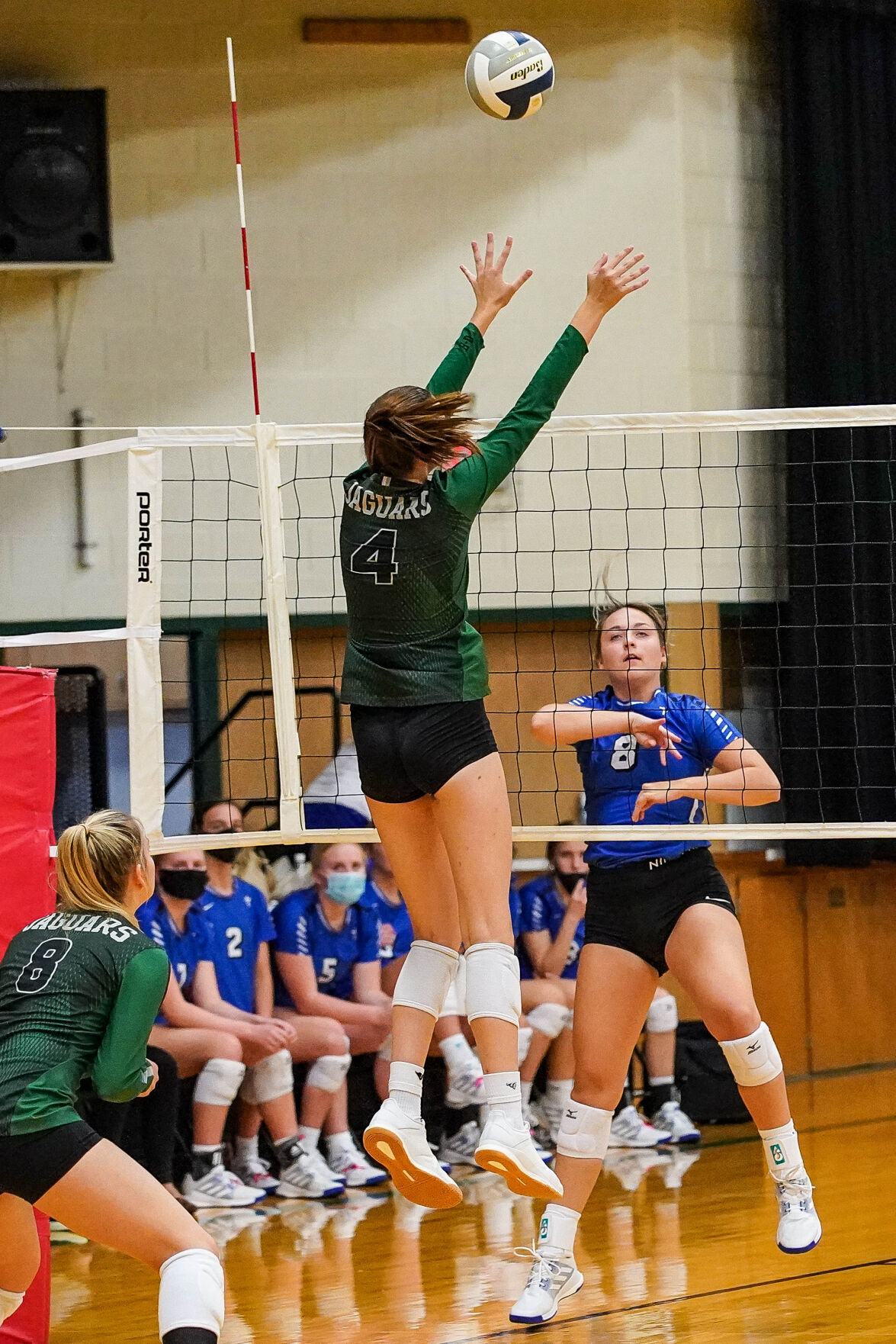 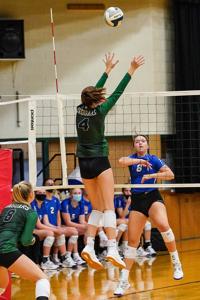 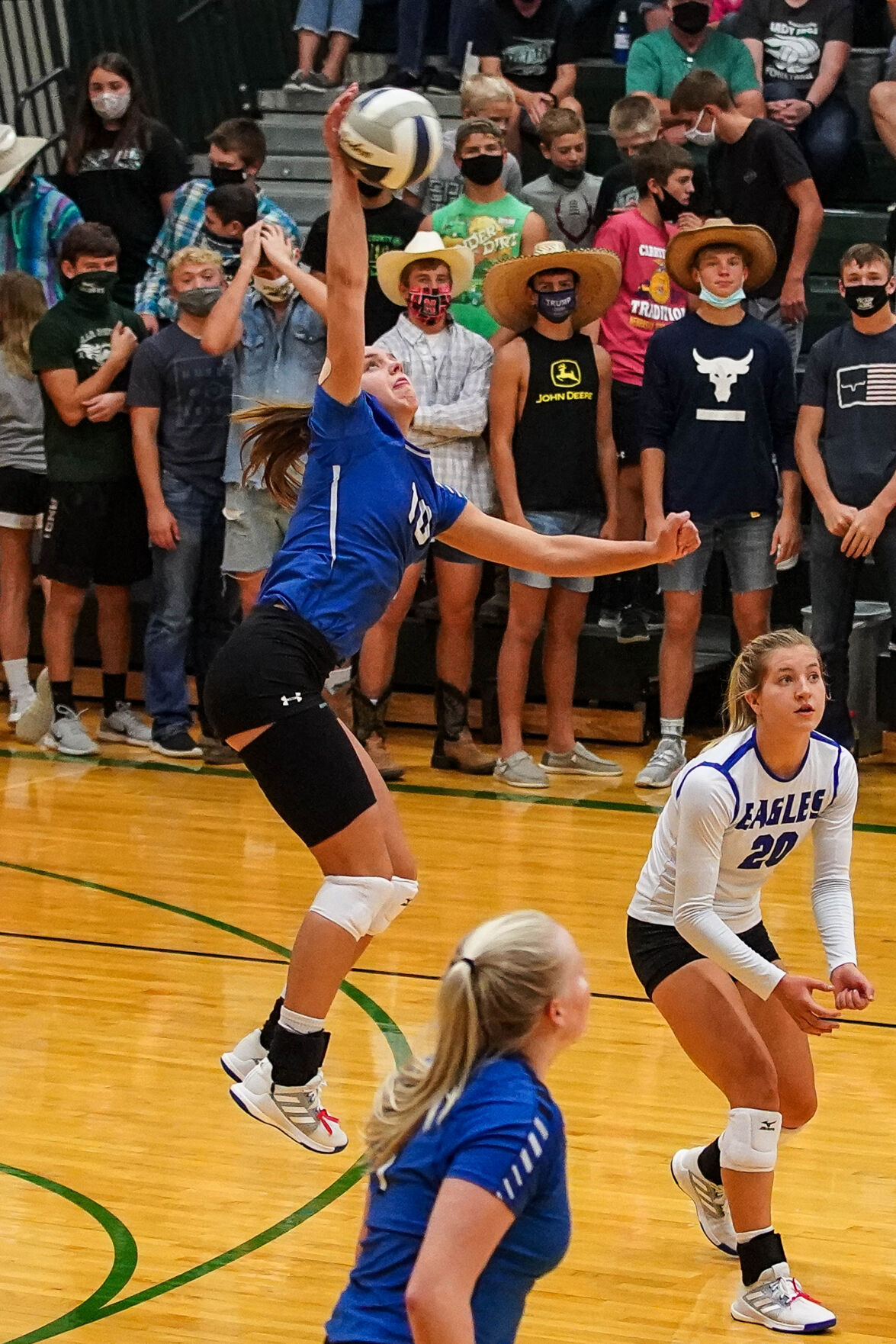 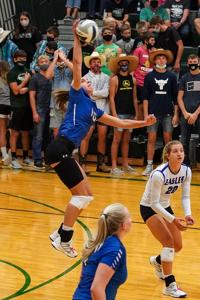 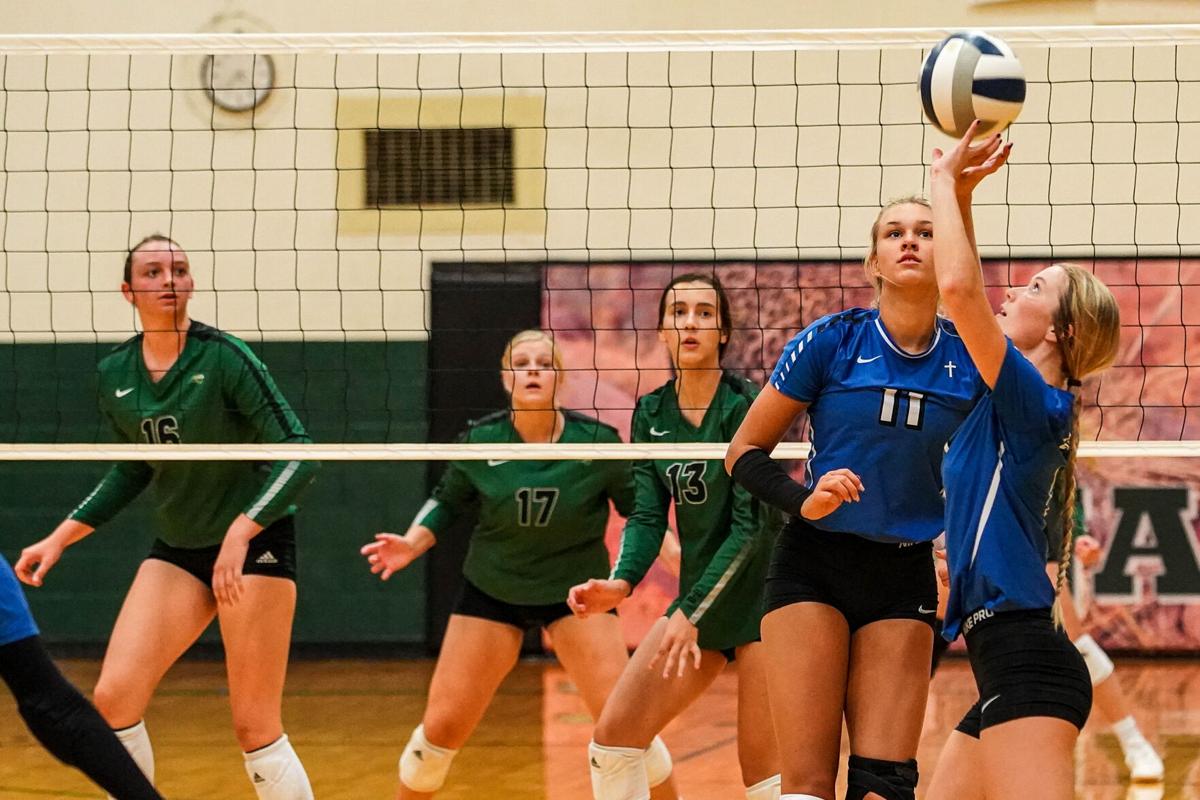 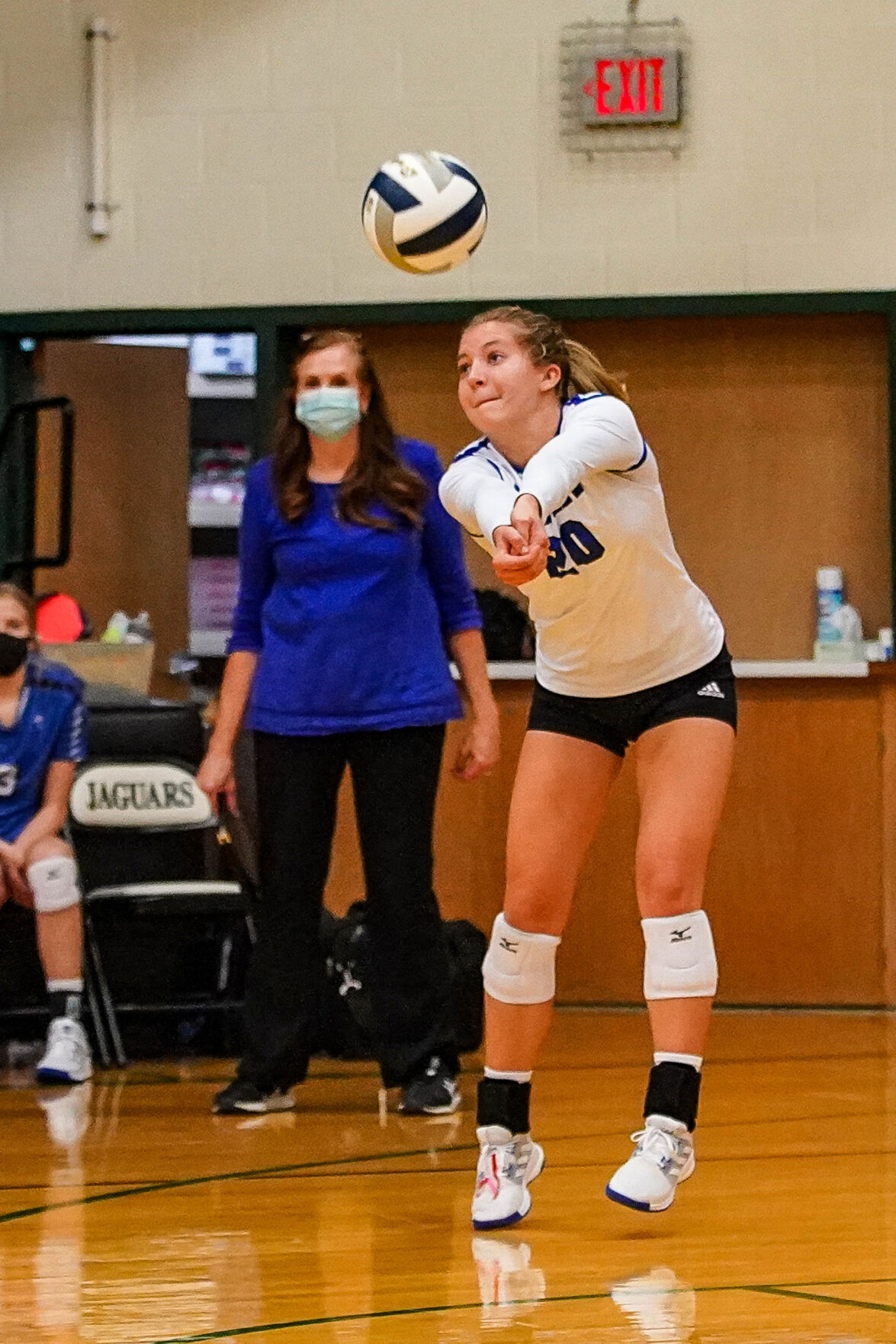 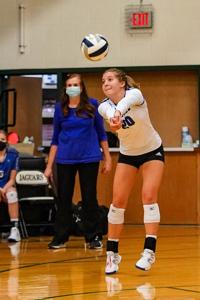 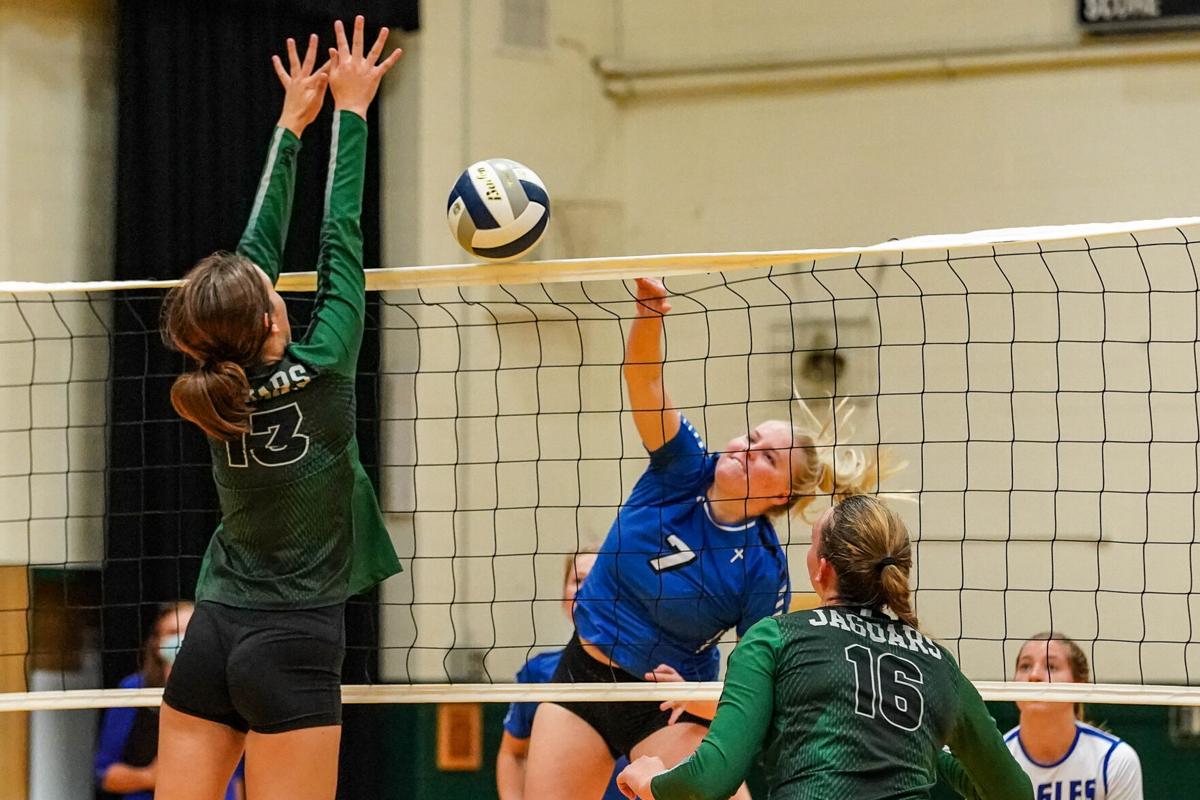 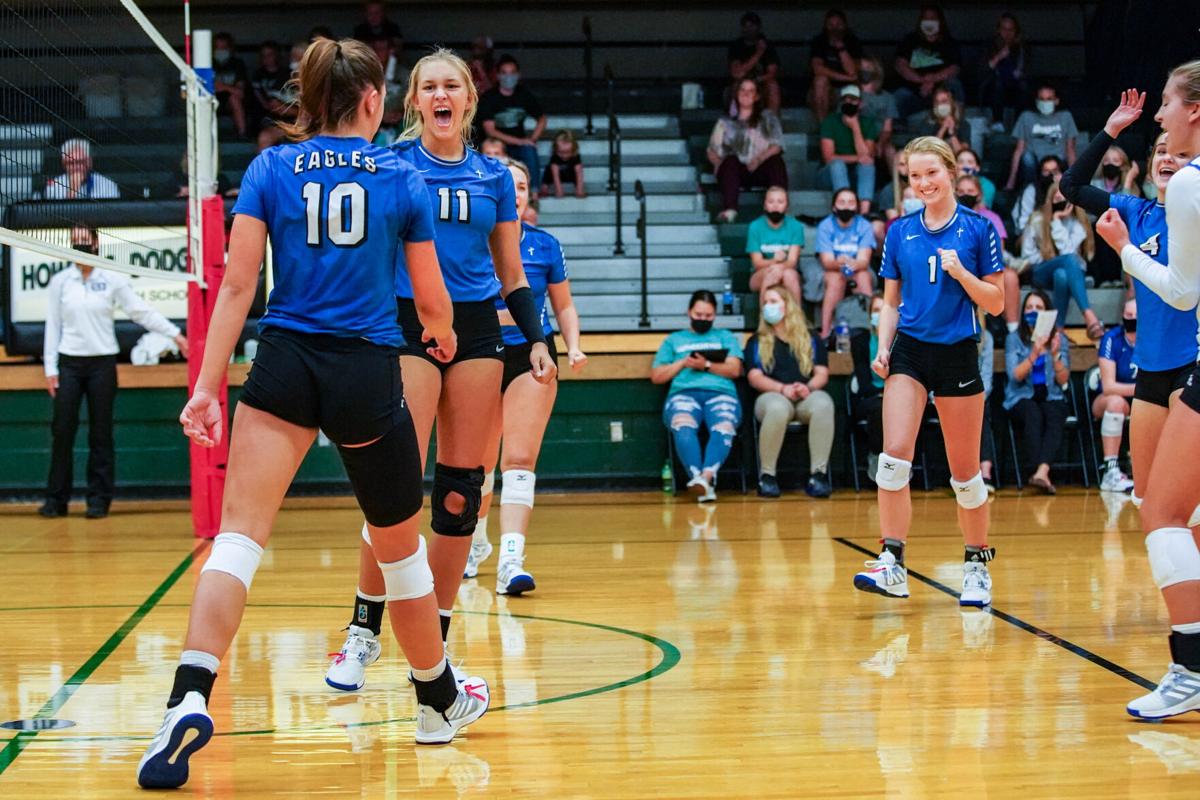 The Eagles from Norfolk have dropped just one set all season — to No. 3 Norfolk Catholic — and 14 of their 17 victories have come against opponents that, going into Tuesday, had winning percentages of .500 or better.

Howells-Dodge entered Tuesday's contest with a record of 8-2 but had difficulty against the balanced Lutheran High attack.

They mix it up," Jaguar coach Taryn Janke said. "They don't just let one person hit the ball. They go back and forth and make you work for it."

Becca Gebhardt led the Eagles with 13 kills while four of her teammates — Chloe Spence, Mia Furst, Lauren Buhrman and Aubrey Herbolsheimer — had either five or six.

"We're trying to get that balance going, especially when Becca's up against the big block on the outside," Kathy Gebhardt said. "We can get our middles going a little more and our right side, so we're definitely trying to spread it out."

"We really just wanted to get around the block and set up for their height and hits," Lutheran High's 6-foot middle Aubrey Herbolsheimer said.

"There were a few times we got caught hitting into their big block, but they're very good," Kathy Gebhardt said.

While the offense functioned well, it was Lutheran High's defense that stepped up on Tuesday. Howells-Dodge's Grace Baumert entered the contest averaging six kills per set but was held to seven for the entire match.

"Our defense started out a little shaky, but we picked it up and started making some really good digs," Kathy Gebhardt said.

Lutheran High led the first set 23-18 before Howells-Dodge made it interesting with a 3-0 run that included a Grace Baumert kill, an Ellie Baumert fake set and dump and a Carly Bayer block.

That made the score 23-21, but after a timeout, the Eagles returned to the floor and put it away with a Becca Gebhardt kill and Jaguar attack error.

Ellie Baumert was able to score on dumps three times in the first two sets, but midway through the second, the Eagles started to figure her out.

"We kind of learned what their setter was doing and were able to start digging that," Kathy Gebhardt said. "And our block improved at the net, so that we were getting good touches and stops. The defensive effort made it possible for our offense to get rolling and do good things as well."

Janke thought her Jaguars were their own worst enemy. "Toward the second set, we just started making too many errors. and then we would get too many in a row and then it would be hard to catch up," she said.

Halle Berner's back-to-back service aces finished off the second set for the Eagles, 25-17.

The host Jaguars looked to turn the tables in the third set and Ellie Baumert's solo block gave her team its first lead of the night at 7-6.

But it was short-lived as Lutheran High scored the next nine points, a span in which Grace Bitney recorded two blocks and a kill en route to a 25-11 set win and sweep of the match.

Howells-Dodge will try to rebound on Thursday in Pender, in a triangular with Cedar Bluffs and the host Pendragons.

Meanwhile, Lutheran High puts its unbeaten record and No. 1 rating on the line that same night at home against an improving Pierce side.

"We don't consider ourselves No. 1," Herbolsheimer said. "We're always trying to make ourselves better and better."

Before the sun rises every weekday, some essential school employees are already hard at work, preparing buses and vans to transport students safely.

MADISON — A Norfolk man was sentenced for attempted strangulation and a protection order violation here in Madison County District Court on Friday.