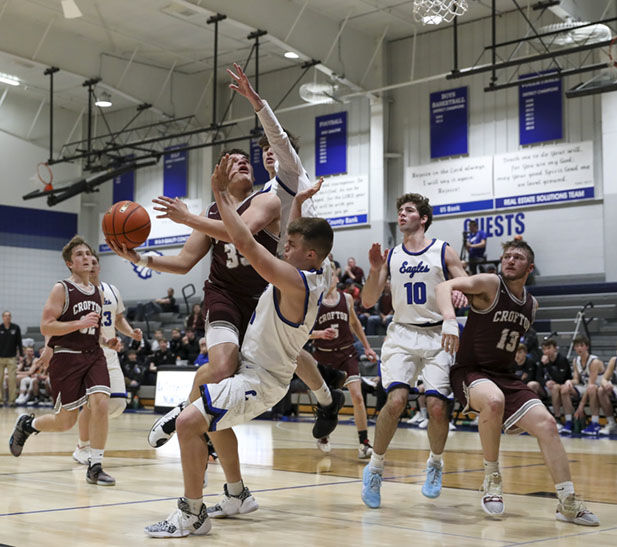 Andy Knapp of Crofton pushes his way to the net 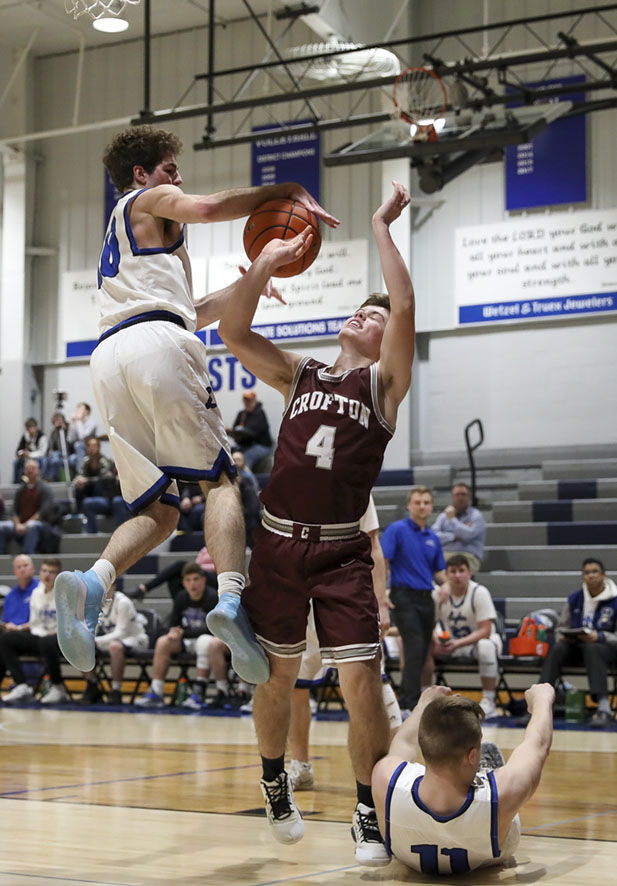 Brady Jackson of LHNE blocks the shot of Austin Tramp from Crofton. 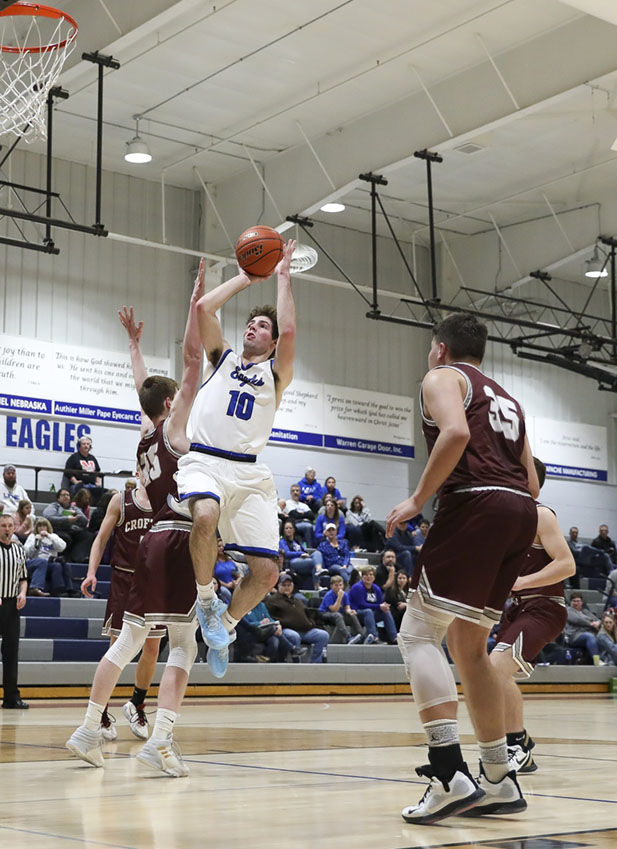 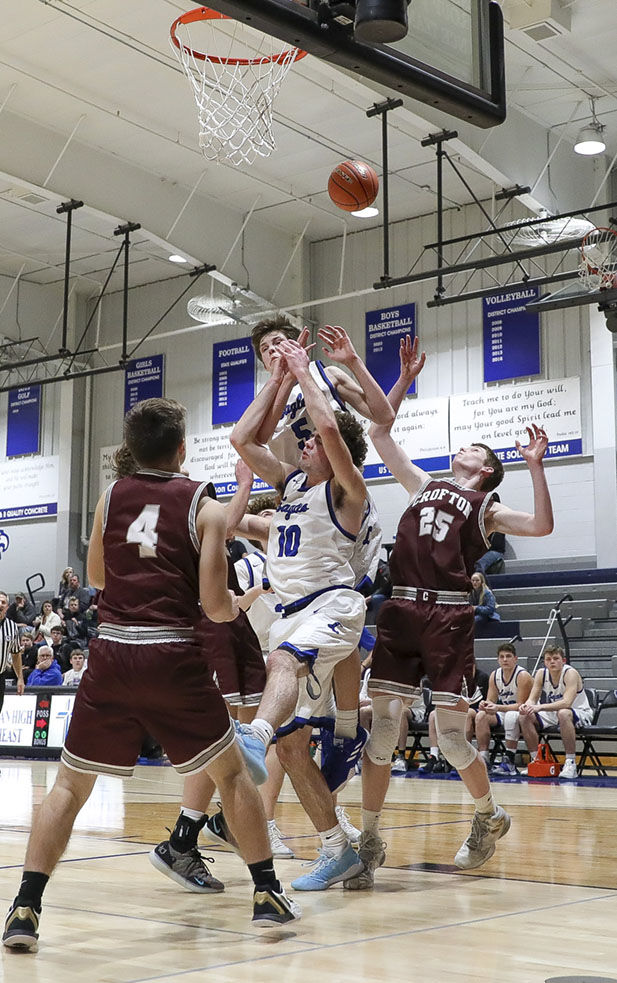 Cort McKeown and Brady Jackson of LHNE fight Austin Tramp and Mayson Ostermeyer of Crofton for the rebound. 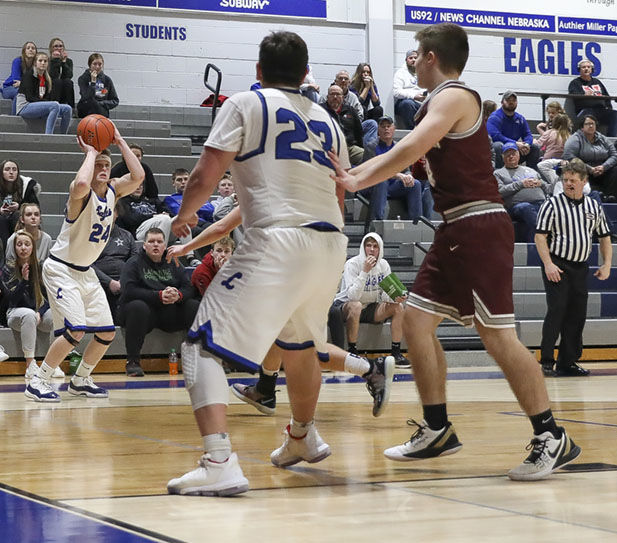 Jaxson Kant of LHNE shoots a three to tie the game

Andy Knapp of Crofton pushes his way to the net

Brady Jackson of LHNE blocks the shot of Austin Tramp from Crofton.

Cort McKeown and Brady Jackson of LHNE fight Austin Tramp and Mayson Ostermeyer of Crofton for the rebound.

Jaxson Kant of LHNE shoots a three to tie the game

Some nights the ball just doesn’t go in the basket, so teams must find a way to win.

That was the case for both Lutheran High and Crofton on Tuesday night during a game in which the team with the lower field goal percentage — by 10 percentage points — won the game in overtime.

When the Eagles’ Tanner Koss stepped to the free-throw line with eight-tenths of a second remaining in the extra period, he had made 1 of 8 field goal attempts and two of his four free-throw chances. After missing his first of two tries, the senior swished the second to secure Lutheran High’s 48-47 win and help the Eagles improve to 11-5 on the season.

“There have been some games where we just had to grind it out and find a way,” Lutheran High coach Kenny Blank said. “And tonight we were fortunate enough to find a way to get the win.”

The Eagles made just 14 of 46 attempts from the field (30%), while the Warriors managed to make 17 of their 42 tries (40%), but Lutheran High’s advantage became five 3s to one for Crofton and two more made free throws in the win.

“We missed a lot of shots. I think maybe their defensive pressure did maybe cause us to get a little bit out of rhythm,” Blank said. “But we did get some good looks that we normally hit.”

Another issue for Lutheran High was the early departure of senior Ben Gebhardt, who hit a first-quarter 3 but soon after was shaken up and left the game after a collision with a teammate.

“Ben might have been a mismatch for them, and we were missing Grant Colligan, who’s been sick, so that shortened up our rotation,” Blank said. “We go from nine players to seven in a hurry, and we also had some foul trouble, but we did have a couple guys step in and give us some minutes when we needed it.”

Crofton — which entered the game 4-11 and seeking to end a seven-game losing string — battled to a 23-17 halftime lead, then led by six again two minutes into the third period, at 25-19, following a steal and assist by Justin Potts to Jayden Eilers.

But a second-half adjustment by Lutheran High to work the ball inside sparked a 12-5 run and, after three tie scores, provided the Eagles with a 31-30 lead entering the fourth quarter.

“They’re a switching team, so we wanted to try to ‘slip’ (the screen) to confuse them on the switch,” Blank said. “With them playing behind, we thought we could get the ball in the post. A couple times we did, and they made a good adjustment late third and early fourth to cause more trouble, but fortunately that got us a little momentum after being down six at the half.”

In the fourth quarter, a trend that had been evident early in the game became a problem for both teams — free-throw shooting. Each team had opportunities to pull away from six more tie scores with an advantage, but the Eagles made just 9 of 17, while Crofton made only 9 of 18 the rest of regulation as well as the four-minute extra period.

Coincidentally, Lutheran High’s 48-47 lead at game’s end was the only time the Eagles had the lead during the overtime and was the result of the Warriors’ final play of the game going awry, which put Koss on the line for the game winner.

Crofton coach John Connot’s timeout with 36 seconds remaining resulted in an unsuccessful drive to the basket by Andy Knapp, whose teammates failed to clear their defenders to the other side of the floor in time, leaving a crowded lane for Knapp to attempt to navigate.

During a scramble for the rebound after the missed shot, Koss was fouled and sent to the free-throw line with time returned on the clock.

Area wrestlers, Pierce look to make a statement in Class B

Northeast Nebraska has always been well-represented on the Class C and Class D medal stands at the Nebraska State Wrestling Championships over the years.

A year ago, the question was whether Valentine would have enough depth for a third straight Class C state wrestling championship.

PETERSBURG — Jim Leifeld isn’t comfortable receiving awards and accolades. In fact, he’s spent most of his life trying to “slide in under the radar,” even though he’s been involved in a plethora of community activities during the 50 years he’s operated a hardware store in this town of around…

Highway 20 could see some improvements by 2022

RANDOLPH — About 10 miles of Highway 20 east and west of here could be improved soon.

The One Book One Nebraska selection for 2020 is “All the Gallant Men” by Donald Stratton with Ken Gire.

The city of Norfolk will be well-represented at the state high school wrestling championships that run Thursday through Saturday at the CHI Health Center in Omaha.

Being trapped not much fun

Quarantines are interesting. It is common to read about them being set up now to prevent the spread of the coronavirus with literally millions of people being quarantined across the world.

Howells-Dodge used 3-point shots to complete a come-from-behind bid that secured a 65-50 win in the C2-5 subdistrict. The victory ended Lutheran High Northeast’s season and earned the Jaguars a spot in the final against top-seeded Clarkson/Leigh on Thursday night.

Survive and advance. That's what counts in the post season.