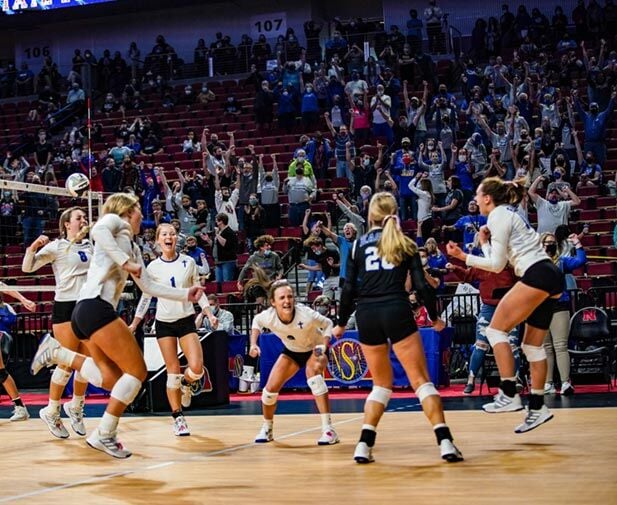 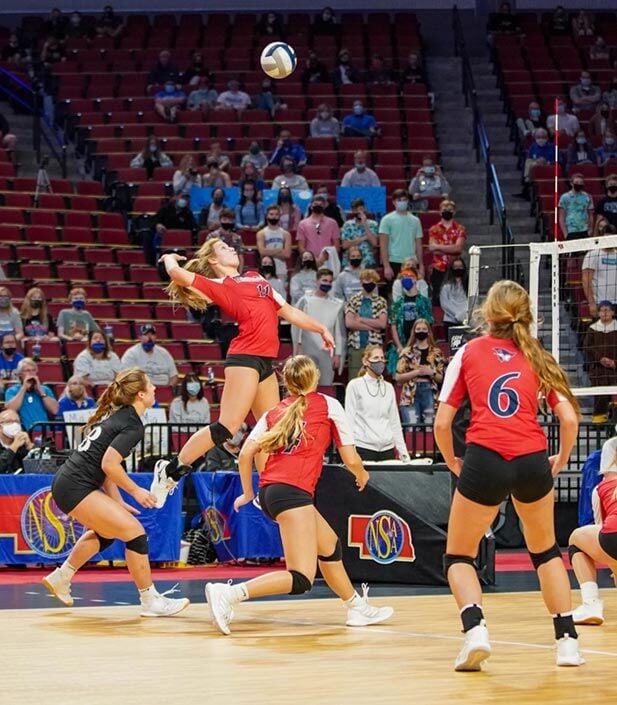 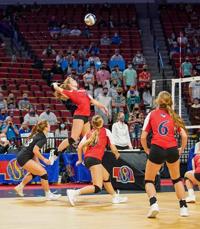 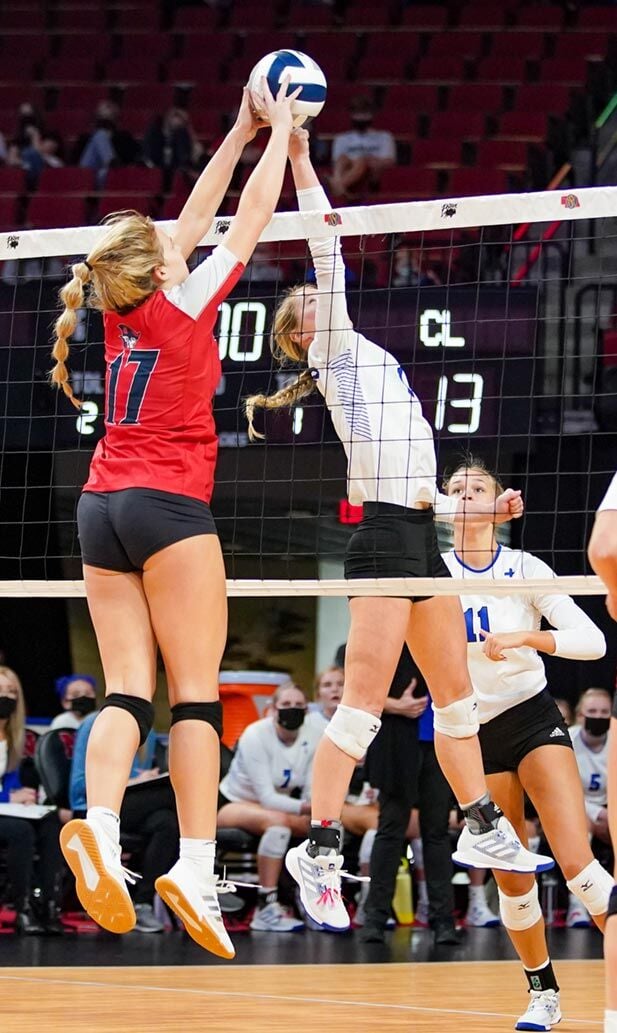 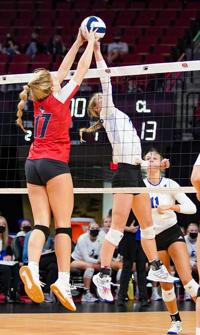 Chloe Spence from LHNE and Cassidy Hoffman fight for the tip 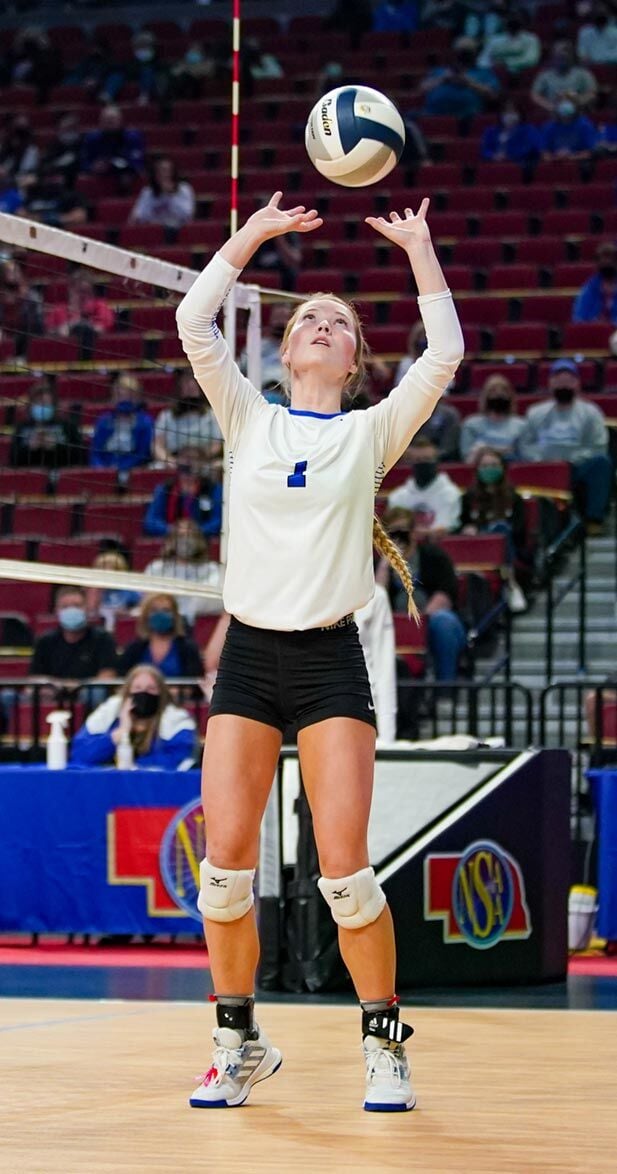 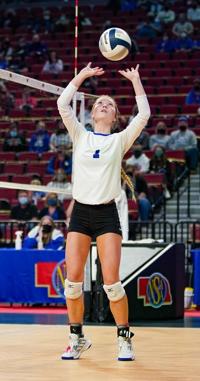 Chloe Spence sets the ball up in State Volleyball action 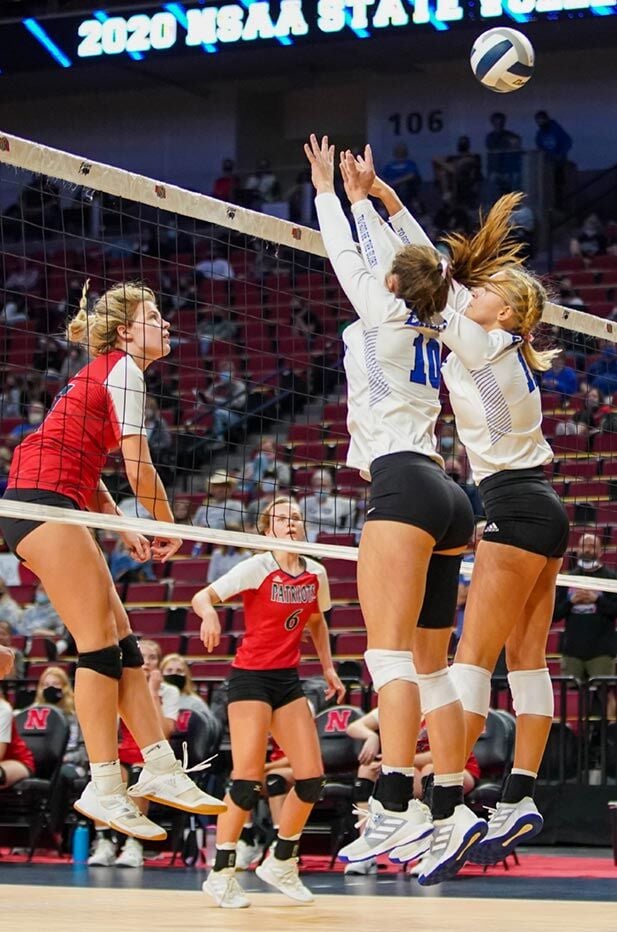 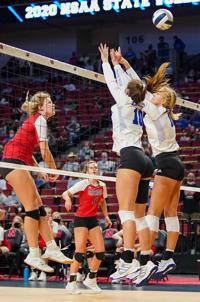 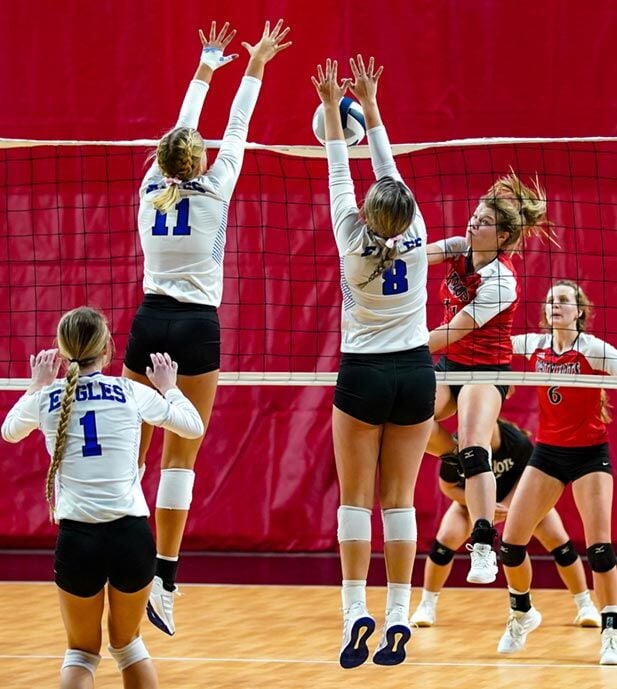 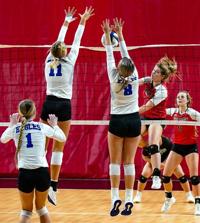 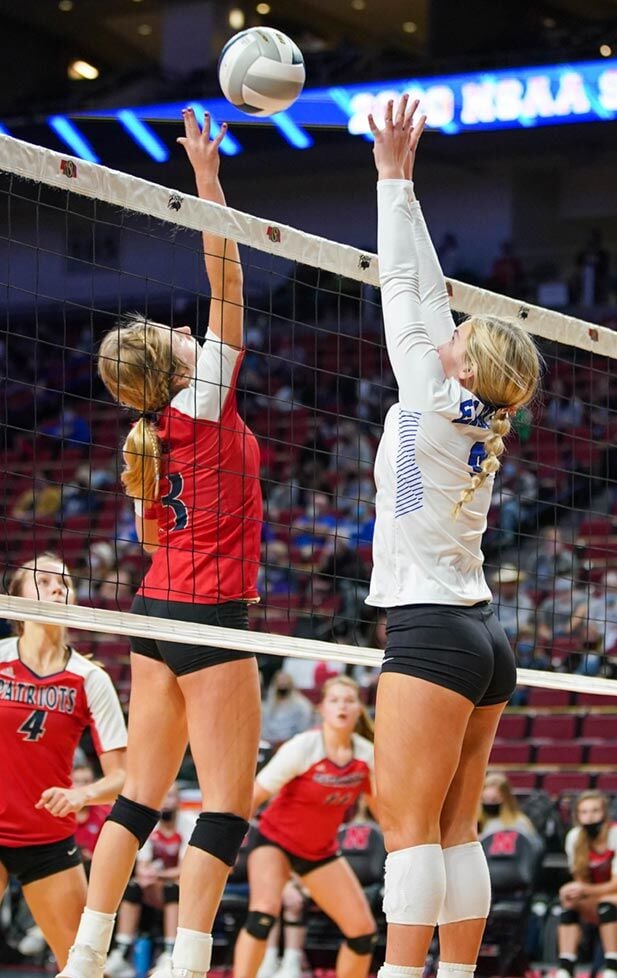 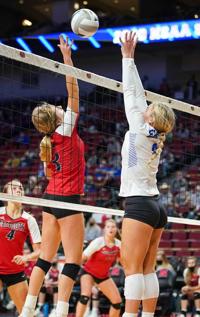 Lauren Buhrman and Mekenna Held both go up for the ball

Chloe Spence from LHNE and Cassidy Hoffman fight for the tip

Chloe Spence sets the ball up in State Volleyball action

Lauren Buhrman and Mekenna Held both go up for the ball

LINCOLN — Lutheran High Northeast and Clarkson/Leigh battled on Friday for the right to play in the Class C2 state championship match and gave the crowd a five-set thriller, with top-ranked and once-beaten Lutheran High pulling out the victory, 23-25, 25-13, 22-25, 25-14, 17-15.

"Hats off to Clarkson/Leigh, they played tremendous," Lutheran High coach Kathy Gebhardt said. "That's not the same team that we saw a month ago when we played them. They gave us everything they could, and I'm just proud of our girls for battling back."

Lutheran High had defeated the Patriots 25-12, 25-16, back on Oct. 6 as part of a triangular, but the Clarkson/Leigh team that showed up in Pinnacle Bank Arena looked completely different.

"I think the first time we played Lutheran High, we were caught off-guard," Clarkson/Leigh coach Becky Schneider said. "I think we played with a lot of fear, and we just didn't know how to stop them. Here, on the big stage, the girls just handled it differently. They were mentally prepared and they were just ready to go. They were on a mission."

The Eagles fought off two of them, but with her team leading 24-23, Kayden Schumacher sent the ball forcefully to the floor and the Patriots were up 1-0 in the best-of-five match.

"They came out swinging pretty hard, and we weren't expecting all those tips that they threw in there," Lutheran High's Becca Gebhardt said. "They had some quick sets that we didn't quite get our block up for, but after the first set, I think we knew what to be prepared for."

Lutheran High seemed to get its mojo back in the second set by jumping out to a 3-0 lead, never trailing and winning 25-13. Becca Gebhardt had struggled in the first set but cut loose in the second.

"She wasn't quite getting the set at where she could make the swing that she wanted to, so credit our setters for getting that ball out to her where she can work with it," Gebhardt's coach and mother said.

The third set was Northeast Nebraska volleyball at its finest. Neither team gave an inch until, with the score tied at 14, Clarkson/Leigh reeled off four straight points on a pair of Bailey Lemburg service aces and kills by Korbee Wendt and Kennedy Settje.

Lutheran High scratched and clawed and actually managed to tie the score at both 21 and 22, but the Patriots put it away starting with Makenna Held's setter dump followed by kills from Settje and freshman Chloe Hanel.

"They've really improved since the last time we played them," Lutheran High libero Halle Berner said. "They really fought defensively and got up everything."

The Eagles looked to tie it up in the fourth by jumping out early. Chloe Spence's ace serve along with kills by Aubrey Herbolsheimer and Gebhardt had the Eagles on top 3-0.

They stretched out the advantage throughout and finished off the set 25-14 to set up the dramatic fifth and final set to 15, win by 2.

“I said, ‘This is what you wanted, you wanted this championship,' " coach Gebhardt said. “ ‘So, are you content to turn it over to them or are you going to give it all right here and work to make it happen?' "

Lutheran High opened with a 5-2 lead that included both a kill and service ace by Mia Furst, but the Patriots rebounded. Hanel's kill off the block tied it at 6.

Then, with Lutheran High leading 12-10, the Eagles' Herbolsheimer suffered an ankle injury. "We don't really know any more than that," coach Gebhardt said. "We'll just have to wait and see."

The teams traded points, then a Clarkson/Leigh attack error provided Lutheran High with its first match point at 14-12.

The Patriots fought it off with an incredible save of a ball that had traveled near their bench. Then the red and blue tied it up with a Settje-Hanel double block.

A net serve gave Lutheran High another match point at 15-14, but Hanel came through again with a kill to tie it at 15.

Lutheran High's Maddie Becker then fielded a Becca Gebhardt dig and set it on the left side to Lauren Buhrman, who sent the ball across the front court just inbounds to make it 16-15, Eagles.

"I just think I needed to be confident," Buhrman recalled thinking after the match. "If you're not confident, you can't really do much. It was really exciting."

The Eagles are 3-0 against the Knights this season.

"It's going to be a tough battle," coach Gebhardt said. "It's tough to play Norfolk Catholic a fourth time because they're a great team."

Meanwhile, Clarkson/Leigh was to have played Overton for third place Saturday morning at Lincoln Southeast.

"We definitely would like to go out with a win," Schneider said. "It's not battling for first and second, but these girls have accomplished so much, and playing for that third-place match is what they want to do and put their name out there and say, ‘You know what, Clarkson/Leigh is here to play.' ”