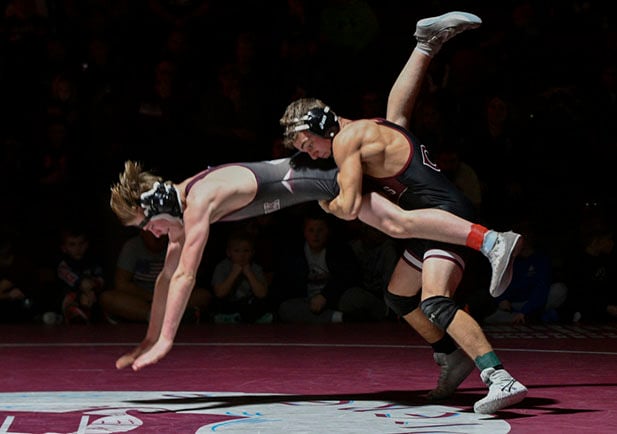 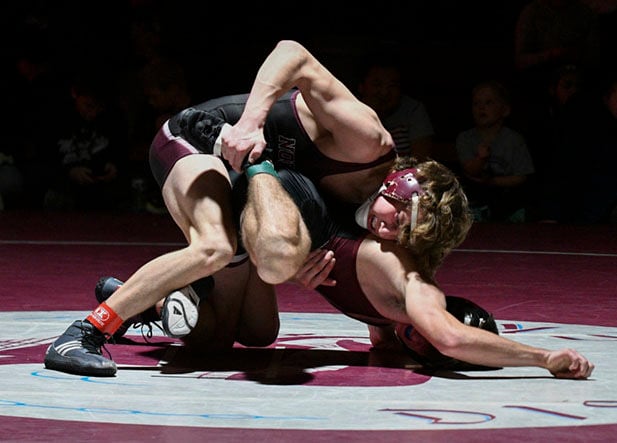 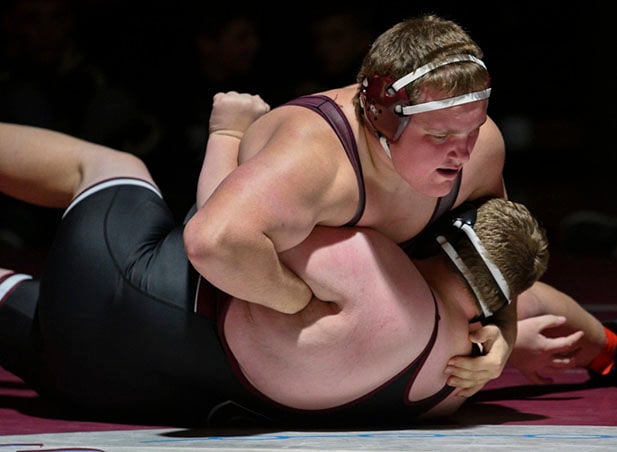 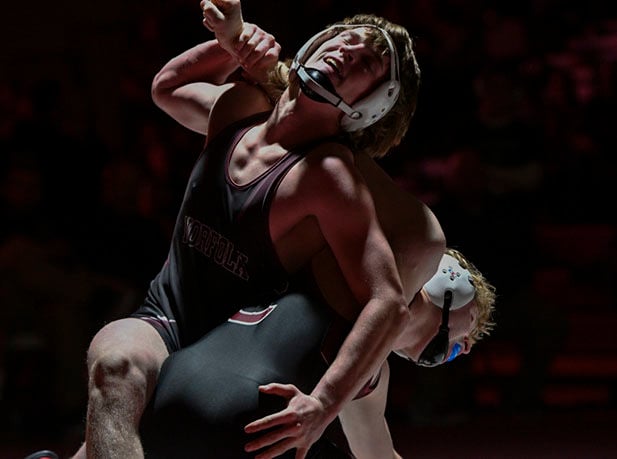 Jake Wragge/Correspondent Columbus-- Austin Miller of Norfolk works to put Liam Blaser of Columbus on the mat during Tuesday night's dual in Columbus. 1-14-2020 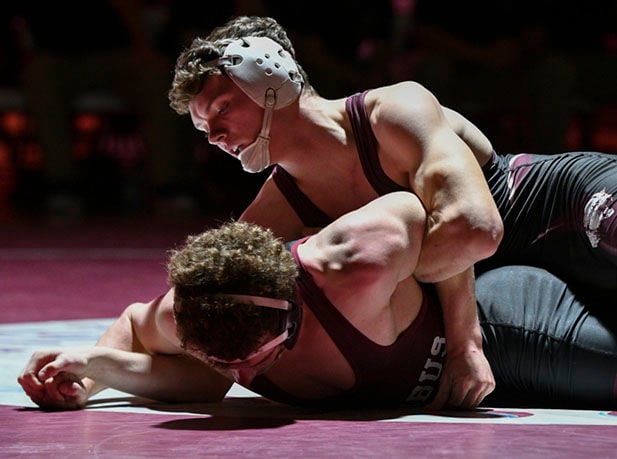 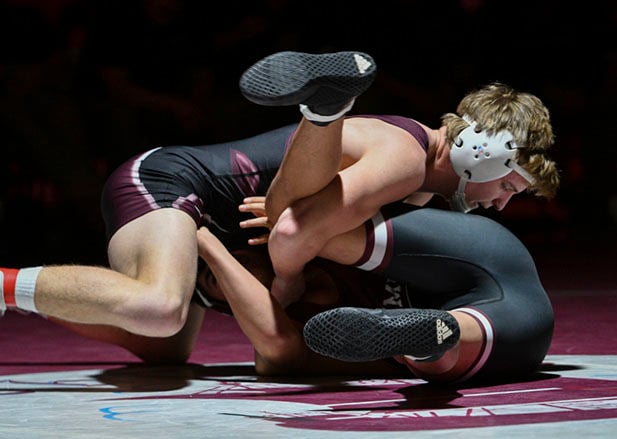 Jake Wragge/Correspondent Columbus-- Jake Licking of Norfolk works to put Levi Bloomquist of Columbus on his back during Tuesday night's dual in Columbus. 1-14-2020 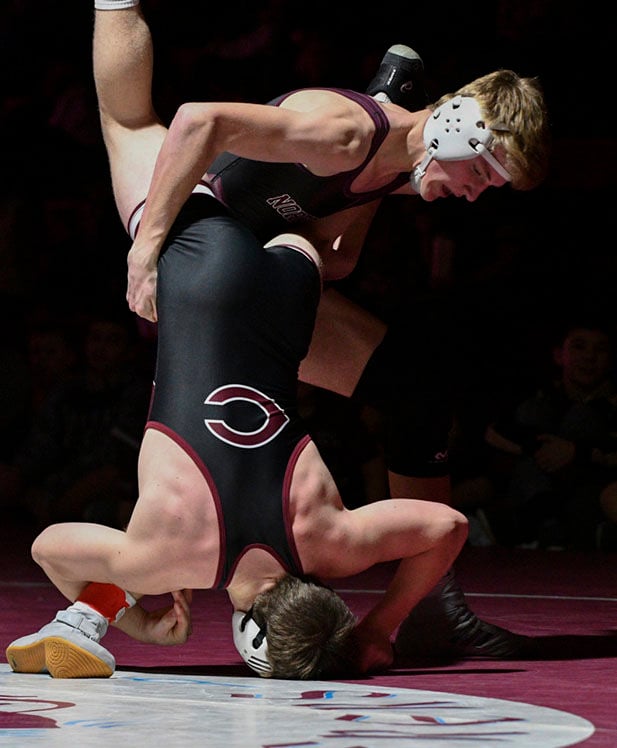 Jake Wragge/Correspondent Columbus-- Austin Miller of Norfolk works to put Liam Blaser of Columbus on the mat during Tuesday night's dual in Columbus. 1-14-2020

Jake Wragge/Correspondent Columbus-- Jake Licking of Norfolk works to put Levi Bloomquist of Columbus on his back during Tuesday night's dual in Columbus. 1-14-2020

COLUMBUS — Norfolk won four straight matches and later received contributions from athletes who lost but avoided getting pinned to keep the score close. But, in the end, powerhouse Columbus used its lightweights to pull away and defeat the Panthers 40-26 in dual action on Tuesday.

“This was a fun environment, great atmosphere,” Columbus coach Adam Keiswetter said. “Norfolk, I don't know how many fans they had, but it had to be in the hundreds. There were a lot of close matches.”

The Discoverers are the third-ranked Class A dual team in the state while the Panthers are No. 10 but, for a while, it appeared Norfolk might have a shot at pulling off an upset.

Norfolk heavyweight Jake Jensen pinned the Discoverers' Sam Beyer in just 37 seconds to tie the team score at 22. But pins at 106 and 120, and a forfeit at 113 provided Columbus with 18 points to put the battle out of reach.

“We knew it was going to be a tough dual coming down here,” Norfolk coach Justin Grey said. “Unfortunately, we had influenza hit our school today and all last weekend. So we were without our 113 pounder (Calvin Empkey) tonight. That's a 12-point swing that puts us within two points of a top-three team in the state.

The action started at 132 pounds where Columbus' second-ranked Tanner Kobza made quick work of Norfolk's eighth-ranked Aaron Ditmer, pinning the Panther in 1 minute, 22 seconds, to give the Discoverers a 6-0 lead.

Columbus then made it 10-0 after Alex Korte earned a 12-2 major decision over Cory Armstrong.

Enter brothers Jake and Josh Licking. At 145 pounds, freshman Jake Licking got the Panthers on the board, leg-riding his way to a 13-3 major decision over Levi Bloomquist.

Josh Licking, the fourth-ranked 152-pound junior, kept his undefeated record intact with a 41-second pin over Luis Garcia to tie the team score at 10.

The older Licking is happy to have his brother as his teammate. “It's been really fun having Jacob here and enjoying the season with him,” Josh said. The pair have another brother, Caleb, a two-time state champion who is now a member of the University of Nebraska wrestling squad.

The back-to-back Licking wins almost didn't happen. “They were both sick this morning with the flu,” Grey said. “But thankfully, they were both well enough to get to school, put in a half a day, so they were eligible to wrestle tonight.”

Fourth-ranked Brayden Splater gave Norfolk its first lead at 160 with an impressive 10-3 victory over No. 6 Mac Shevlin.

The night's best match came at 170 when Norfolk's Austin Miller hung on to defeat Liam Blaser.

Blaser led 2-1 after one period and then chose the down position to start the second. Miller stuck in a half and earned two back points to take a one-point lead. The Panther was then called for an illegal hold and Blaser was awarded one point to tie the score heading into the third.

Miller chose the down position, quickly got to his feet and notched an escape to take a 4-3 lead, then shot for a single leg and earned a takedown for a 6-3 advantage.

In an attempt to escape, Blaser, who had built up to his feet, while Miller held on, threw the Norfolk wrestler off to his right, injuring Miller. Blaser was awarded one point for an escape, but the referee stopped the match as Miller was tended to by trainers.

As Miller was receiving treatment, Blaser spent the time waving his arms to rev up the crowd. It worked.

When the match resumed, Miller led by two with 48 seconds remaining. There were plenty of tense moments late, including Blaser's single-leg shot, with less than 10 seconds remaining, that Miller was able to fight off — barely — and earn three team points for the 6-4 decision.

Norfolk led 16-10, but the next three Columbus wrestlers — Blayze Standley, Anthony DeAnda and Kasten Grape — were all ranked among the top two in the state at their respective weight classes and because the Discoverers do not have a 220-pounder, Keiswetter chose to have all three move up one weight division.

At 182, Standley earned a hard-fought 8-4 decision over Hunter Mangelson. DeAnda moved up to 195 and was able to defeat Laikon Ames 9-4. That tied the team score at 16.

“Brayden Splater wrestled well. Austin Miller put on a heck of a show at 170 for us,” Grey said. “Laikon Ames wrestled (No. 2) DeAnda and for Laikon to go out there and give that guy a match, I thought that was just a great performance.”

Keiswetter agreed. “I was kind of expecting at 182 and 195 to try to look for some pins there,” he said. “We only got decisions. Those guys came to fight. They weren't giving us an inch.”

The Discoverers then regained the lead when Grape took just a minute and 13 seconds to pin Brayden Heffner at 220, but the Panthers tied it up again at 285 when Jensen pinned Beyer.

That set the scene for the Columbus lightweights to put the dual out of reach.

“Those lightweights, Columbus is really solid there,” Grey said. “We're strong at our middle weights and our upper weights, so they had to bump their good guys up to wrestle our better guys. That kind of evened out the score a little bit. It came down to bonus points, and we knew that.”

The Panthers picked up one more win as Weston Godfrey won the evening's final match at 126 over Andon Stenger, 11-0.

Despite the loss, Grey was proud of how well the Panthers competed. “This is the closest we've been to Columbus in quite a few years,” he said. “So with only four seniors on our team, I like where we're at. Our JVs dominated that dual tonight, so I like the future of Norfolk wrestling versus Columbus. It's coming.

“We'll get healthy, get everybody where they need to be and hopefully by the Norfolk invite (Feb. 1), we can turn this around, get a few of those wins back for districts because we see these guys (Columbus) in our district, too.”

The Panthers are back in action Thursday, at home against Elkhorn.

It’s not a secret that in today’s world, students are attached to their smartphones.

The year 2010 was not that long ago, but long enough that I was thinking there are some things that 2010 Diane would not understand about 2020 Diane’s life.

With University of Texas coach Shaka Smart in attendance to watch Lincoln North Star’s Donovan Williams, a one-time Nebraska recruit who has reopened his recruitment, the 6-foot-5 senior made what may have been his most important play of the game — an offensive rebound.

Looking forward to next mountain vacation

One place that will always be near and dear to my heart is the state of Wyoming. There’s something about the rugged terrain, snowy peaks and pine trees that calls to me.

Rewriting the definition of a senior

When I was asked to be a contributor to the Norfolk Senior Center's new column "Senior Moments," I thought, "How hard can that be? My life is a series of senior moments. However, once I sat down at my computer to put a few thoughts in writing, I realized that this may be more challenging tha…

Norfolk Public Schools students and parents listened intently as Darrell Scott narrated the story of the life and death of his daughter, Rachel Scott, in the Johnny Carson Theatre on Monday night.

After struggling a little early in the year, the young West Point-Beemer Cadets have hit their stride and are ready to take their spot among the area's elite.