Those who spoke both for, against city mask mandate should be commended 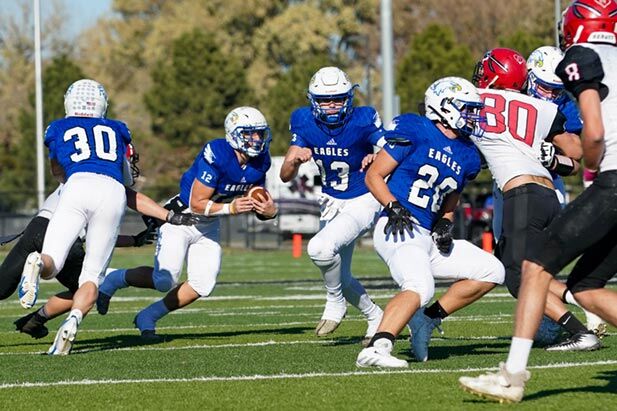 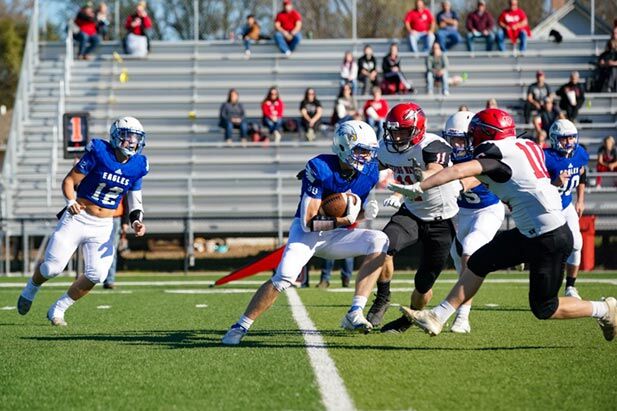 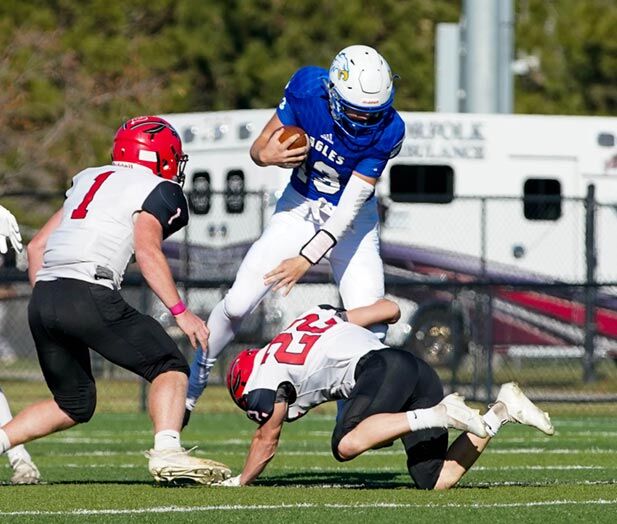 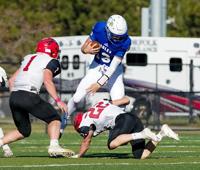 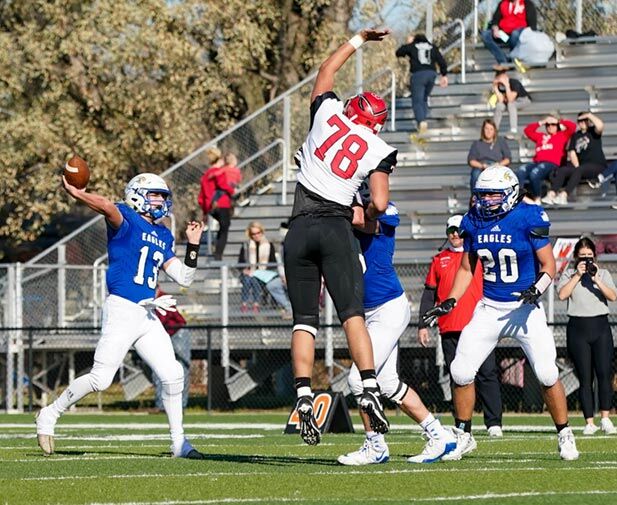 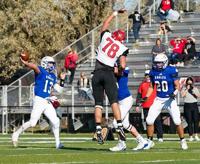 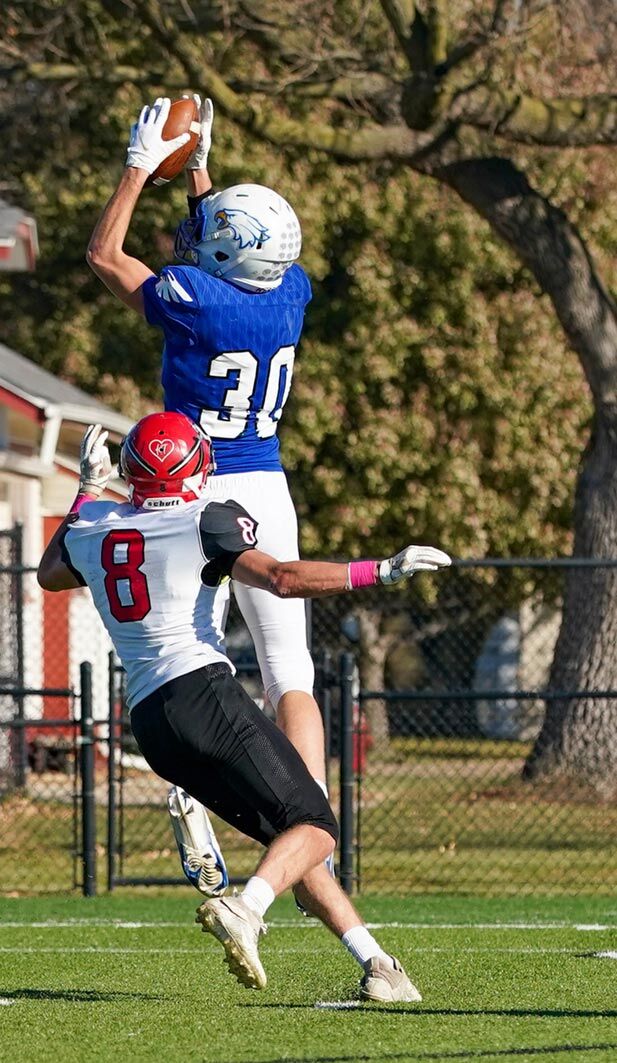 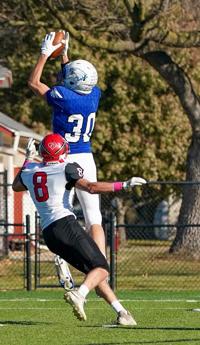 Lutheran High Northeast had the 24-8 lead and seemed to have all the momentum midway through the second quarter in Friday's Class D1 second-round playoff game against Weeping Water.

When that lead dissipated, it seemed Lutheran High again grabbed the momentum when Eli Knapp raced around the left side for a 13-yard touchdown with just 2 minutes, 39 seconds left, and Haydyn Beaudette's two-point conversion made it 32-28.

But Weeping Water had one final answer that the hosts couldn't match.

Zack Smith got free from the Lutheran High coverage on a double move, and quarterback Hunter Mortimer's pass was on target to help put the Indians ahead 36-32 with just 46 seconds to go. On the next offensive snap, Smith intercepted a Lutheran High pass to finish the comeback and end the Eagles' season Friday afternoon at Memorial Field.

“I can't say enough about our guys, the way they fight, and the way they never count themselves out,” Weeping Water coach Joel Haveman said. “I think we have a team full of warriors.”

On the other sideline, Lutheran High coach Darin Suckstorf said the contest left him wondering what might have been. The Eagles attempted just five passes in the second half after going 3 for 4 through the air in the first half, despite the Indians loading the box defensively to stop the run.

“A lot of this is going to be on me, looking back on this,” he said. “I feel sorry for the kids. Just didn't have the answer today.”

Lutheran High's offense was driving right along early on, turning each of its first three possessions into eight points — a game-opening 58-yard drive capped by Knapp's short run, a 65-yard march highlighted by Beaudette's scoring toss to Cort McKeown and a 48-yard drive punctuated by Garrett Boelter's power up the middle on third-and-goal.

“I thought we got off to a great start,” Suckstorf said. “We executed offensively and defensively. I know we gave up a cutback run and they had a wheel route for a touchdown in that first half but, other than that, I thought we were executing really well.”

But after that, the gear shifter got stuck in neutral.

Lutheran High gained just 15 yards from the 8:25 mark of the second quarter until Weeping Water scored a touchdown on the opening play of the fourth quarter to put the Indians in front 28-24.

What started that stretch was a three-and-out, including a fullback run on third-and-5 that got blasted for a 3-yard loss.

“That's a drive I wish I had back,” Suckstorf said. “I'm kicking myself right now. I tried a little sneak play on the back end and got stuffed. I wish I had that back. That might be the difference in the football game if we got some momentum.”

Weeping Water took advantage with a touchdown pass with just over a minute left in the first half, and the Indians nearly had a second TD toss, but the receiver was out of the back of the end zone and dropped the ball anyway. The visitors pulled to within a possession in the third quarter, setting the stage for a frantic finish.

After the Indians took the lead early in the fourth, Lutheran High saw an 11-play drive end on a fourth-down incomplete pass. But the Eagles came up big defensively by stopping Mortimer on fourth-and-3 at the 39.

Beaudette found Quinn Pape for a 21-yard play down his own team's sideline — Lutheran High's first pass completion of the second half — and Knapp did the rest on a pair of direct snaps to give the Eagles a 32-28 lead.

But the defense, which was on the field for all but eight plays of the third quarter, didn't have another stop left in it. Mortimer found Levi Neumeister on a play-action pass for 36 yards and, five plays later, Weeping Water landed the dagger with the final go-ahead score.

“This team has been fighters all year,” Suckstorf said. “We were down in the GACC game and put together a drive to win it and then put a drive here together. It was asking a lot out of our defense to play the whole second half. It seemed like they were on the field the whole time. They made some great plays to get across midfield with that catch, and they had a good double move there to win it.”

The loss ended Lutheran High's season with an 8-2 record. In their past three seasons, all in eight-man football, the Eagles have qualified for the playoffs three straight times.

“These seniors have done a good job of carrying on the tradition that we have a little bit,” Suckstorf said. “They've done a great job of leadership in the offseason (and) in the weight room. They took a bulk of our carries and a lot of our tackles on defense, so they're going to be missed.”

— Weeping Water lineman Weston Reiman holds a preferred walk-on offer from Nebraska. Reiman, a 6-foot-3, 285-pound senior, projects to be an interior offensive lineman at the next level.

— Lutheran High committed two turnovers, both interceptions near the end of the half. Weeping Water's lone turnover was a fumble on the opening play of the second half.

— Lutheran High outgained Weeping Water 140-70 in the first quarter, but the Indians outgained the Eagles 150-8 in the third quarter. For the game, Weeping Water had a 360-253 advantage in total offense.

Panthers mix things up, picked up from where they left off from last season

In the opening swim dual of the season, the Norfolk Panthers swimming team swam against South Sioux City at the YMCA in Norfolk. Norfolk came out on top 258-64, with a very strong all-around performance on Thursday.

For her fourth and final season, Annika Harthoorn — like siblings Kaitlin, Breanna and Caleb did before her — will play a key role in the success of the Norfolk High swimming program.

I’ve written it before, and I’ll write it one more time: Preseason rankings are one of the toughest, and perhaps most thankless, job of a sports writer.

Norfolk High’s new boys basketball coach, Matt Shelsta, would be the first to tell you that taking the Panther coaching job is not a “stepping stone” chosen to help him move up the coaching ladder.

PLAINVIEW — Some 25 years ago, Dean Boyer showed up at Plainview and took over a wrestling program his peers called “pathetic” at best.

CWC and Crofton look to go from third to first

CHAMBERS — Chambers/Wheeler Central and Crofton have a lot in common. Both suffered gut-wrenching state semifinal losses; both rebounded the next day to earn third place in their respective classes and both have the talent and drive to compete for state championships in March.

After months of construction and waiting, many students and staff at St. John Lutheran School received a fresh start.

PENDER — Leon Svoboda is the third generation farmer to live on his family’s farm east of Pender.