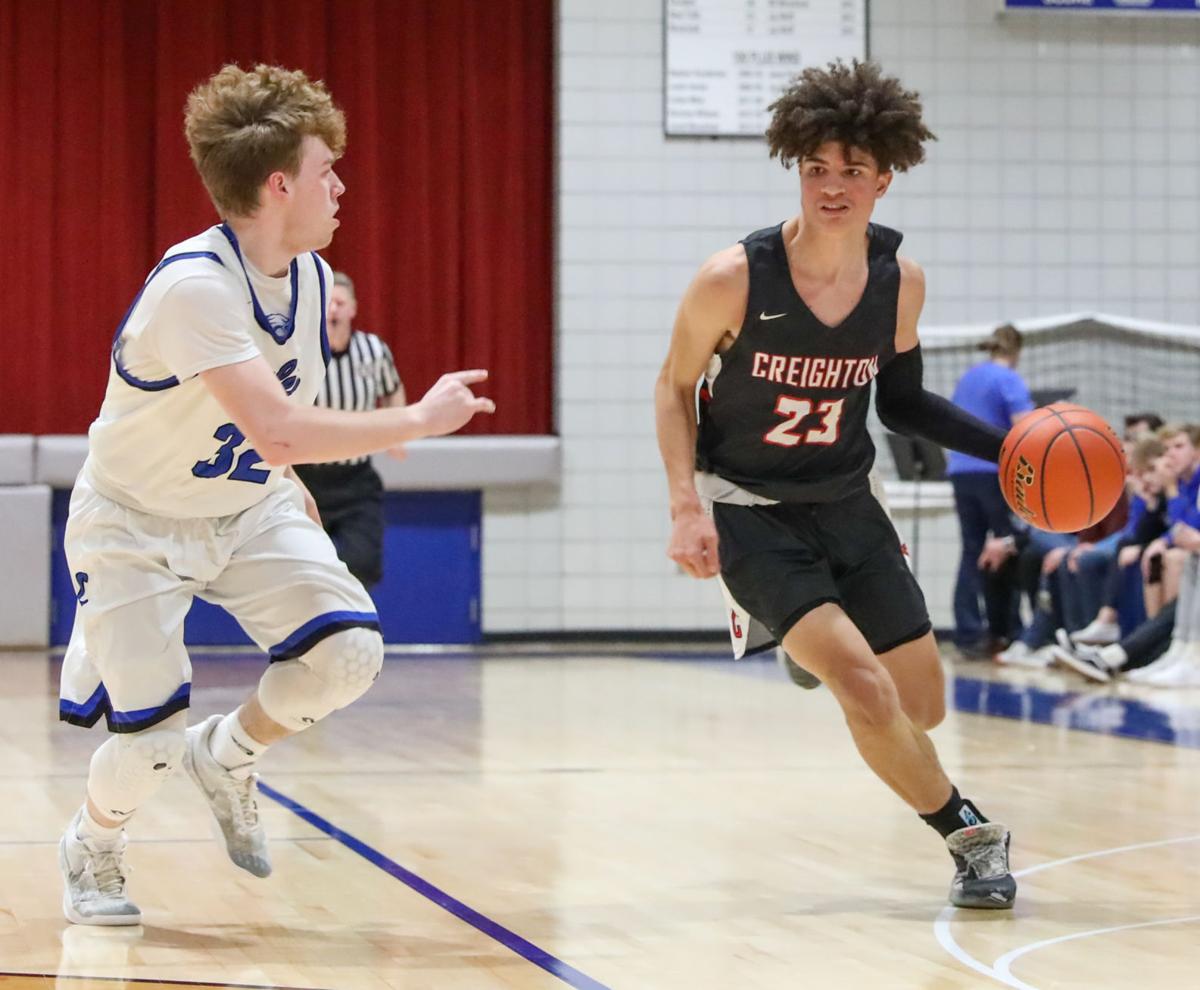 John Mitchell of Creighton tries to drive past Trystan Scott of LHNE. 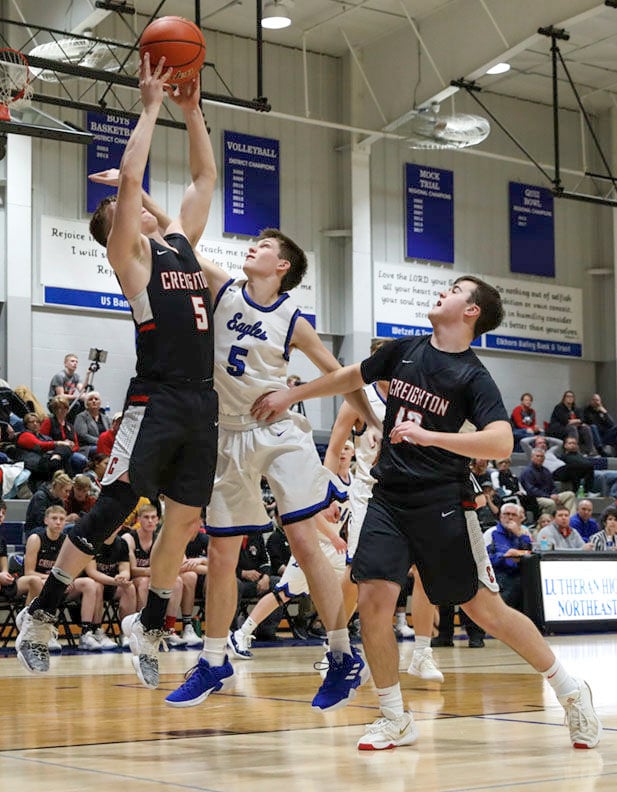 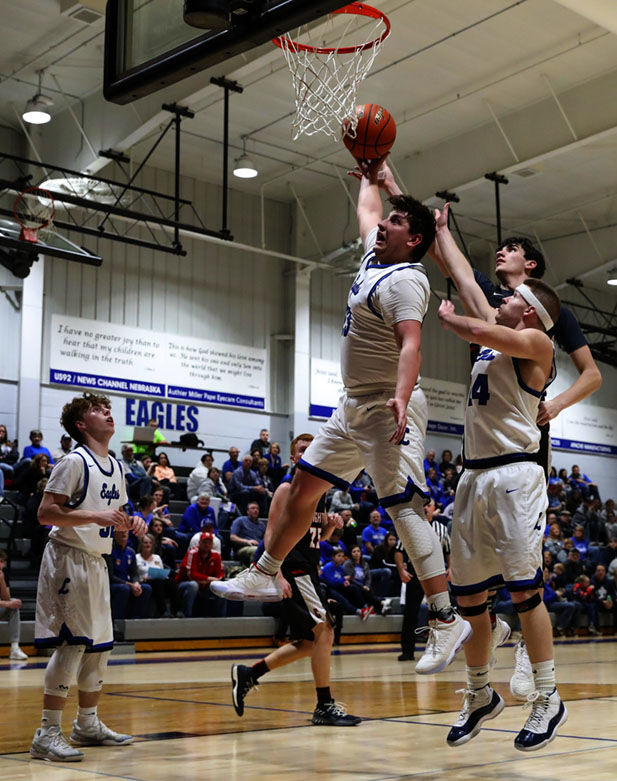 Tanner Koss of LHNE gets the rebound vs Creighton 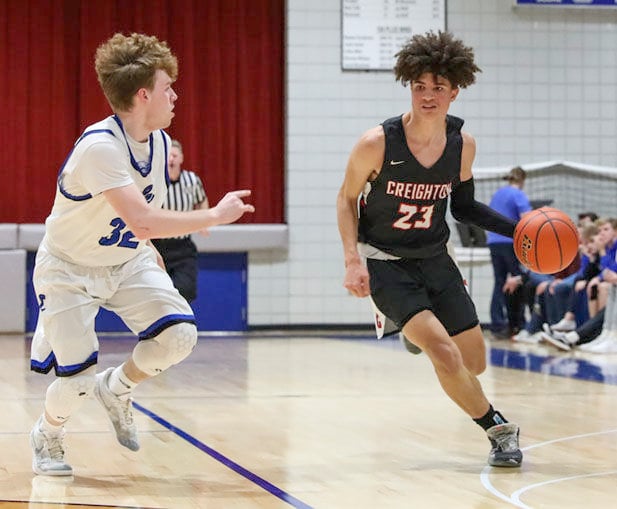 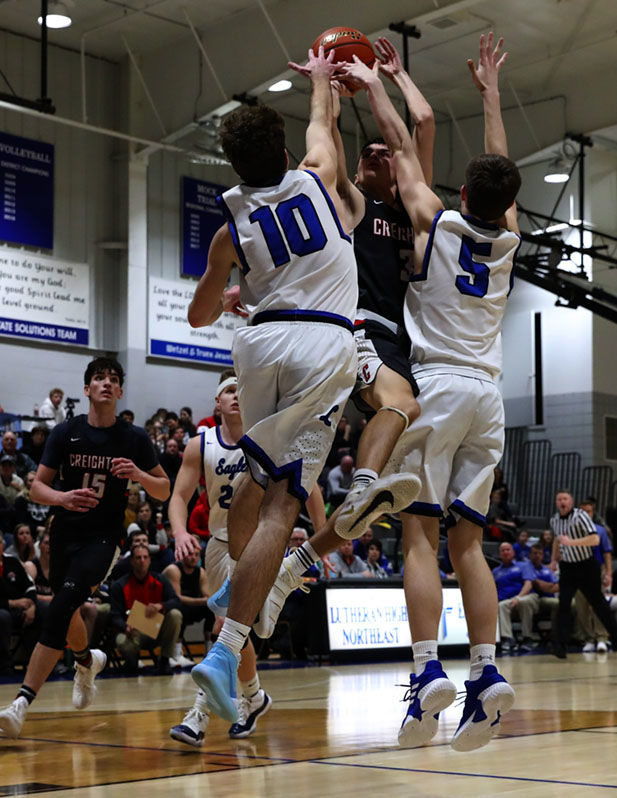 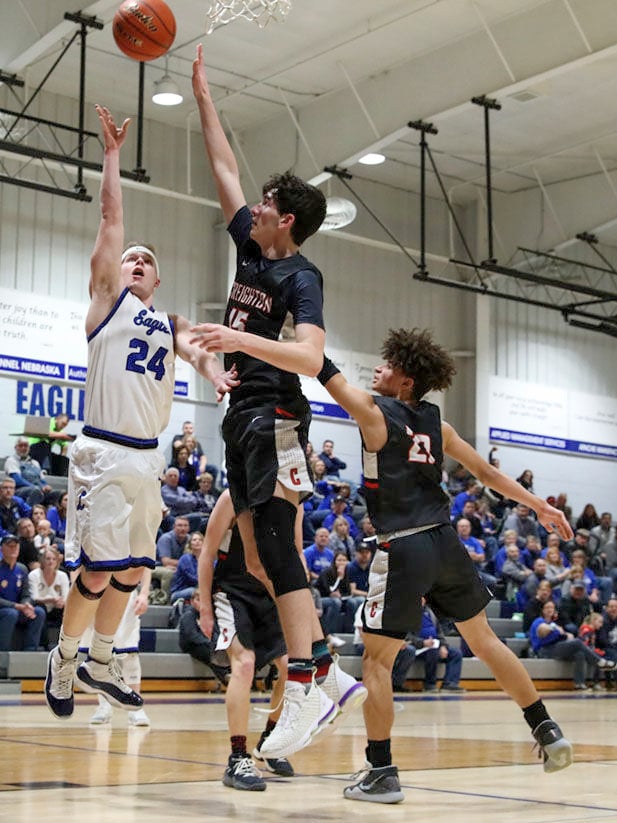 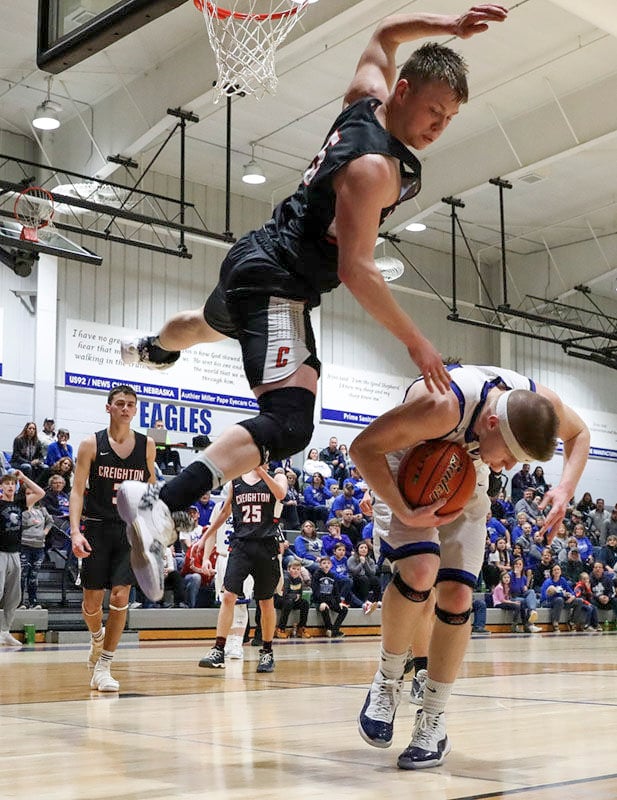 Clay Curtis of Creighton flies over Jaxson Kant of LHNE

John Mitchell of Creighton tries to drive past Trystan Scott of LHNE.

Tanner Koss of LHNE gets the rebound vs Creighton

Clay Curtis of Creighton flies over Jaxson Kant of LHNE

It only seemed that the final 21.9 seconds took forever.

When the dust settled on a frenzied finish that included five timeouts and nine free throws, the host Lutheran High Northeast boys basketball team survived a 69-66 nailbiter against Creighton in a battle of teams with double-digit wins this season.

“It was really long,” Lutheran High coach Kenny Blank said. “We missed a couple free throws to let them stay in it, and they did a good job of extending the game by attacking and making twos. … For the most part, we hung in there, and then we were able to make enough free throws down the stretch.”

Lutheran High led virtually the whole fourth quarter thanks to a 9-0 run to end the third quarter, which was punctuated by a Tanner Koss 3-pointer at the top of the key with five seconds left in the third. But the Eagles never led by more than six in the entire fourth quarter, and that gave Creighton multiple chances down the stretch.

Creighton freshman John Mitchell, who had a game-high 26 points, dished the ball out to senior Alex Homan for a 3-pointer to cut the gap to 65-62 with 21.9 seconds left, followed by a Bulldogs timeout.

Koss was then fouled moments later, but he missed both free throws. Homan honed in the rebound, and Creighton called a timeout with 13.6 seconds left. Instead of holding for a tying shot at the buzzer, Cade Hammer raced through the lane for an easy layup, and the Bulldogs used their last timeout with 9.5 seconds left, trailing 65-64.

“We told them, ‘If (certain) guys get it, they can shoot a 3; otherwise, if it's quick, let's attack the rim and get two,’ ” Creighton coach Ryon Nilson said. “The idea was, we know it's a one-possession game, we can get a two. It never would hurt us in that situation.”

A foul on the ensuing inbounds play put Trystan Scott at the line for Lutheran High, and he hit both free throws. After a Lutheran High timeout, Conner Hammer took the inbounds pass, sprinted down the court and jacked up a 3-point attempt between defenders that sailed off the mark as he was fouled with 4.5 seconds left. He missed the first free-throw attempt but made the final two surrounding a Lutheran High timeout to put Creighton within one point again at 67-66.

Cort McKeown was fouled with 3.6 seconds left, and he connected both times from the charity stripe for a three-point margin. An off-balance 3-point attempt while stumbling fell well short of the hoop at the buzzer.

“Not long enough,” Nilson said about the amount of time left for a comeback. “Not quite long enough.”

Kant finished with a team-best 22 points to lead Lutheran High, while Ben Gebhardt and McKeown each added 11.

In the second quarter, it was a 9-2 run by Creighton — three straight 3-pointers, to be exact — that changed the momentum.

Conner Hammer hit two 3s in 55 seconds, and then he assisted on a Mitchell 3 for a 26-21 lead with 3:27 left in the second quarter for the fifth and final lead change of the first half. Mitchell added an off-balance jumper, and Cade Hammer's basket made it 42-35 in favor of the Bulldogs with 4:40 left in the third quarter.

Creighton tied it momentarily in the fourth quarter on Homan's putback, but Lutheran High followed with the next six points — a Scott 3 followed by a Kant 3-point play 45 seconds later — to regain the lead for good.

“We talked about it on Monday,” Blank said. “We had three tough teams left, and we started it off with a good Creighton team to get us some momentum going into Saturday. That was big for us.”

Most counties in the region lost population, census indicates

Madison County’s latest population estimates are available, with the latest figures showing modest growth — similar to the past decade.

On March 1, Cody Murphree was in Thurston County Jail’s outdoor recreation area. When the jailer watching him left to check on something, Murphree climbed up a basketball hoop, loosened bolts in the fence surrounding it, creating an opening. From there, he climbed to the roof of the building…

MADISON — A Stanton man was sentenced for enticement by an electronic communication device, attempted possession of child pornography and contributing to the delinquency of a child.

Tips offered on finding what style 'suits' you best

Professionals around Northeast Nebraska have a wide range of individual styles, and they share their collections and explain what inspires them to wear such unique clothes.

WEST POINT — A rural West Point woman opted for the mission field of Uganda over the beach for this year’s spring break.

Drizzles is experiencing an identity crisis.

"Days of being inside has me feeling a little quacky."

Shelly Taylor
was this week's winner.