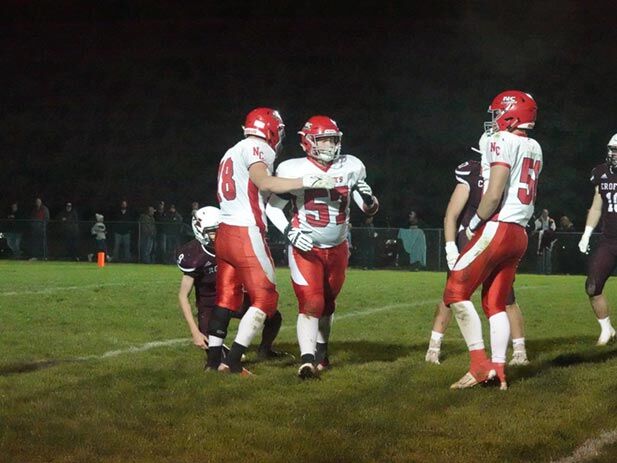 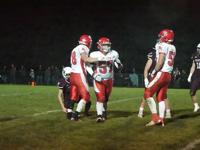 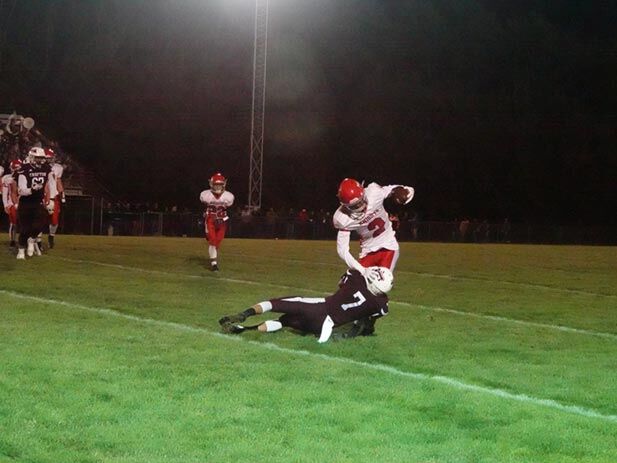 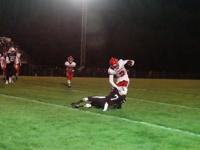 Brennen Kelley of Norfolk Catholic is hit by Will Steffen of Crofton after catching a pass during Friday's game in Crofton. 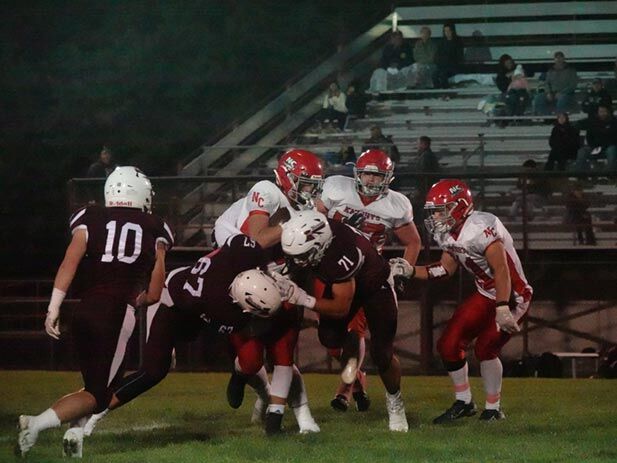 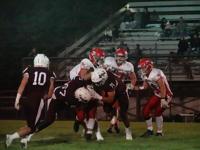 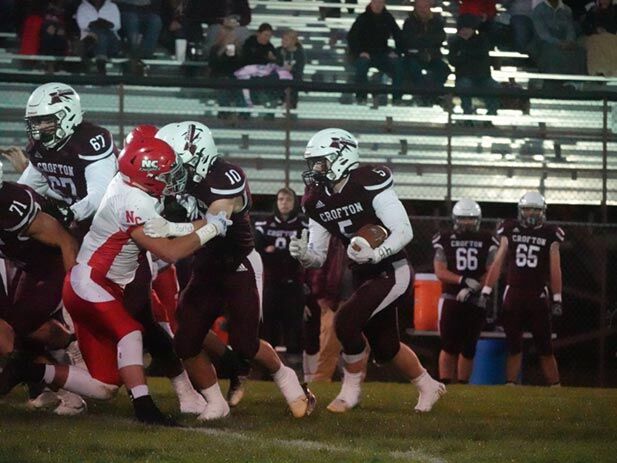 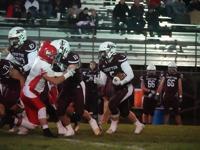 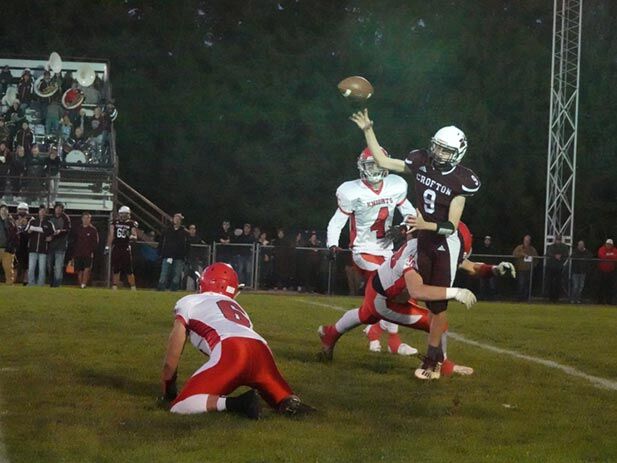 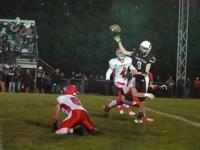 Simon McFarland of Crofton is hit by Kade Pieper of Norfolk Catholic as McFarland releases a pass during Friday's game in Crofton.

Brennen Kelley of Norfolk Catholic is hit by Will Steffen of Crofton after catching a pass during Friday's game in Crofton.

Simon McFarland of Crofton is hit by Kade Pieper of Norfolk Catholic as McFarland releases a pass during Friday's game in Crofton.

CROFTON — Three of Norfolk Catholic's first five wins this season were decided by six points or fewer. So when Crofton took the opening kickoff and drove 56 yards in nine plays for a touchdown, the Knights didn't blink.

Norfolk Catholic scored touchdowns on six straight possessions, its defense forced four takeaways and the Knights put themselves on the cusp of the Class C2-3 district title with a convincing 41-13 victory Friday night.

"We talked to our kids all week saying it was going to take 48 minutes in this game," Knights coach Jeff Bellar said. "Those (earlier games) definitely helped because I don't think you panic then. You understand that anybody can score on anybody at any time in high school football."

The Knights were able to do the job with a balanced rushing attack.

Karter Kerkman, a 195-pound junior, had another solid day at the office, rushing 12 times for 98 yards and three touchdowns. His classmate, Kanyon Talton, followed with 91 yards and two touchdowns on just eight carries. Sophomore quarterback Carter Janssen had 45 yards rushing and completed 6 of 10 passes for 51 yards, but two of Janssen's completions came on fourth down — and the Knights eventually scored touchdowns on those drives.

"For a quarter and a half, we kept it close with them," Crofton coach Tom Allen said. "But then some things happened to us as far as big plays, and hats off to them for that."

Crofton running back Jimmy Allen was as good as advertised, though. The 185-pound senior finished with 27 carries, 141 yards and both of the team's touchdowns. Including a pair of short pass receptions, he accounted for all but 65 yards — or nearly 69% — of Crofton's entire offensive output.

"They've got as good of a running back as there is in the state of Nebraska," Bellar said. "He's very strong, a good, hard runner, he keeps his feet, and really is patient. I think that's a good word for him."

It wasn't easy for Norfolk Catholic — and through one quarter, it didn't look good.

Crofton stopped the Knights on their first drive of the game and appeared to be driving again as sides changed after the first quarter. But two plays in, Mason Timmerman intercepted a halfback pass along the Norfolk Catholic sideline, and the momentum changed.

Kerkman capped the nine-play drive with a 10-yard score. Three plays later, the Knights recovered a fumble and, on the next snap, Talton sputtered momentarily before he took off around the left side for a 46-yard touchdown.

"That killed us. We were moving the ball there again, and I felt like if we could have put that in, it might have changed the tide of the game a little bit," coach Allen said.

Norfolk Catholic then forced a three-and-out, and Kerkman followed two plays later when he stiff-armed one defender, sidestepped away from another and took off for a 37-yard scoring sprint to make it 21-7 with 1:18 left in the first half. That capped a stretch in which the Knights scored three touchdowns in just four offensive snaps.

The Knights began the second half much as they ended the first, with Janssen connecting with Preston Burbach on fourth and 5 for a 17-yard play, and Kerkman doing the rest for a three-touchdown lead.

Crofton would score on the next drive, but Norfolk Catholic answered again.

Facing fourth and 10 at the 34, Janssen fired a bullet pass that Brennen Kelley snagged near the far sideline for a 17-yard gain and, on the next play, Timmerman stiff-armed his way past a defender on a reverse, rounded the corner and raced into the end zone. On the next possession, a high snap on a punt led to an ill-advised incomplete pass, and Norfolk Catholic took advantage of starting at the 15 for a short touchdown drive to cap the scoring.

— The Crofton community was rocked earlier in the week when Blake Bartels, 39, a former player and Crofton graduate, died in a one-vehicle accident. His son, Paxton, is a junior on the team. At the game, Norfolk Catholic parents and fans donated more than $400 to the family.

"To have a tragedy like this on his end, and to come in to see the rest of us, I think that helps," coach Allen said. "He knows how much we care about him. He didn't have to show up tonight. He had whatever option he wanted to do. But he wanted to be part of this team."

— Norfolk Catholic junior Triston Hoesing was injured following Talton's touchdown run in the second quarter. Play was stopped for more than 15 minutes, and Hoesing was transported via ambulance from the game.

— The Knights outgained the Warriors by nearly an entire football field — 302 to 209. The teams combined for just 98 passing yards, but Norfolk Catholic's secondary rose to the occasion by holding Crofton to just 1 of 5 passing in the second half with two interceptions.

— Friday's result set the stage for a district championship game next week in Norfolk, when Hartington Cedar Catholic and Norfolk Catholic enter with matching 7-1 records overall and 3-0 marks in Class C2-3 district play. Both teams' lone losses are to Class C1 schools, with Cedar Catholic having fallen earlier this season to Battle Creek.

"They're really good," Bellar said. "We'll have a great challenge. I'm glad we got the win tonight, and we'll get ready for next week. We know they're good."