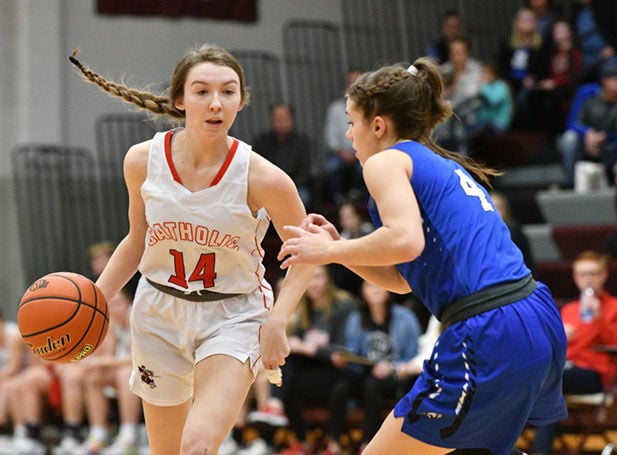 Jake Wragge/Correspondent Norfolk-- Hayden Wolf of Norfolk Catholic moves the ball down the court guarded by Gina Wragge of Pierce during Thursday night's game in Norfolk. 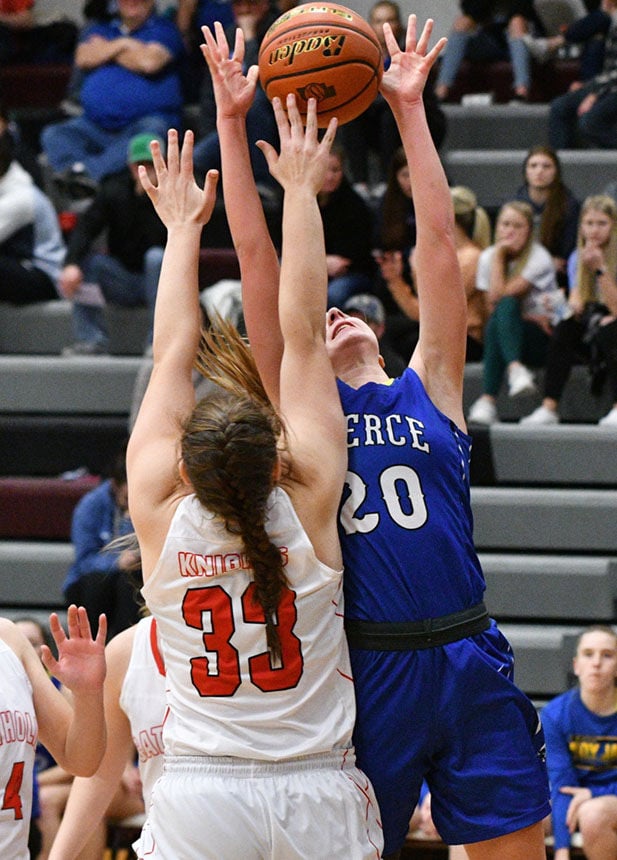 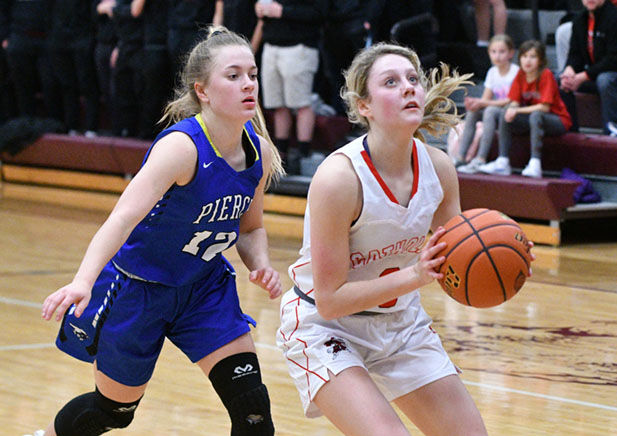 Jake Wragge/Correspondent Norfolk-- Carly Marshall of Norfolk Catholic moves past Kenzie Moeller of Pierce to put up a shot during Thursday night's game in Norfolk. 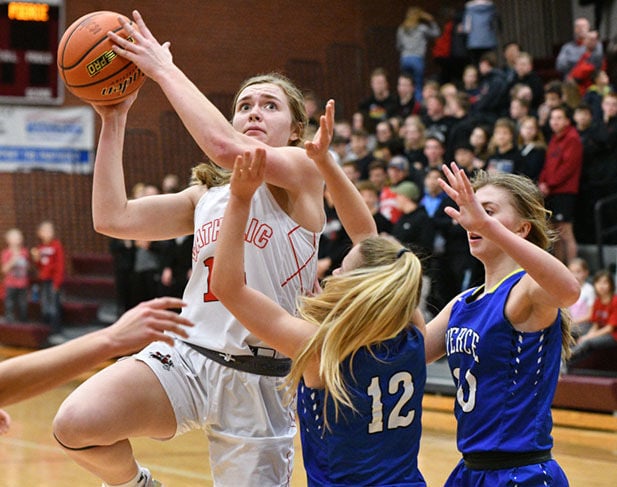 Jake Wragge/Correspondent Norfolk-- Abby Miller of Norfolk Catholic puts up a shot over Kenzie Moeller and Zoe Brenden of Pierce during Thursday night's game in Norfolk. 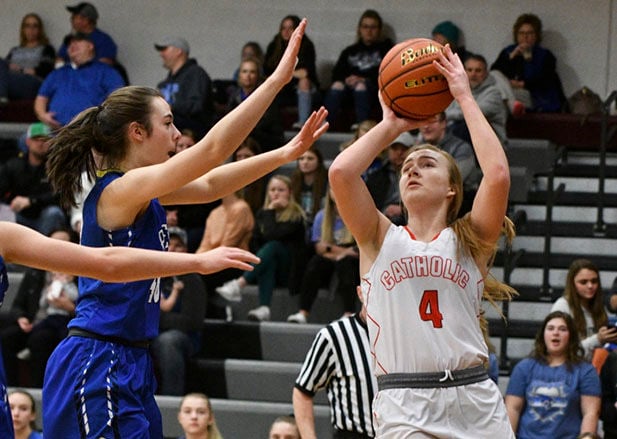 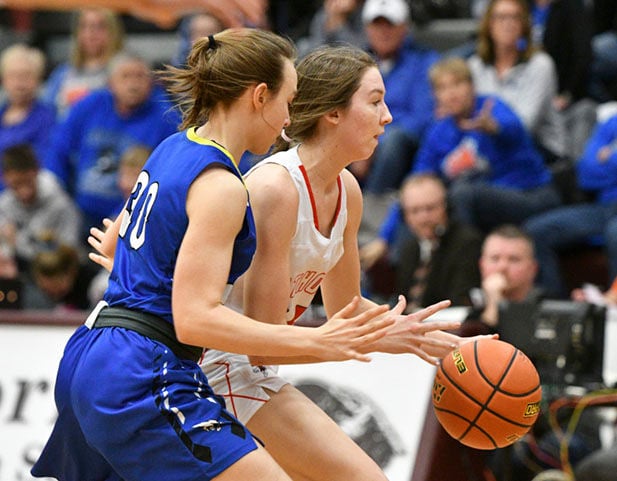 Jake Wragge/Correspondent Norfolk-- Hayden Wolf of Norfolk Catholic moves the ball down the court guarded by Gina Wragge of Pierce during Thursday night's game in Norfolk.

Jake Wragge/Correspondent Norfolk-- Carly Marshall of Norfolk Catholic moves past Kenzie Moeller of Pierce to put up a shot during Thursday night's game in Norfolk.

Jake Wragge/Correspondent Norfolk-- Abby Miller of Norfolk Catholic puts up a shot over Kenzie Moeller and Zoe Brenden of Pierce during Thursday night's game in Norfolk.

A dominating Norfolk Catholic defense limited the Pierce to just five field goals — none in the second or third quarters — as the Knights clinched the Class C1-7 subdistrict title with a 35-15 win Thursday evening in a game played at Norfolk High School.

Norfolk Catholic coach Tim Kassmeier said it was important that the Knights stay close to the Bluejays’ 3-point shooters, a lesson learned when Pierce used 3-point shooting in the fourth quarter during a 38-34 come-from-behind win over the Knights last month.

“We thought they were really good 3-point shooters if we let them catch and shoot. We got pretty good pressure on them, getting a hand in their face,” Kassmeier said. “If you only give up six points in three quarters, you’ve done some tremendous things.”

Playing at a too fast pace at times prevented either team from shooting the ball particularly well early and caused both to struggle with turnovers. Pierce finished the game with 27 turnovers, while the Knights committed 15.

“I wish we’d have been better offensively but, at the same time, we were getting the looks that we wanted,” Kassmeier said. “Our ideas were right even if we didn’t get the pass where we wanted it. I thought we played a really smart game.”

The Bluejays not only had a difficult time working their way through Norfolk Catholic’s 1-2-1-1 press, then also had a hard time finding open shots against the Knights’ 2-3 matchup zone.

The Knights made 3 of 12 field goal attempts in the first quarter and 3 of 11 in the second, but Pierce made just 2 of 11 before going a combined 0 for 11 from the field in the second and third periods. The Bluejays’ scoring in each of those two quarters was a single free throw. By then Norfolk Catholic had turned a 6-4 first-quarter lead into a 29-6 advantage heading into the final quarter.

Ten Pierce shots during the first three quarters were from beyond the arc, and the Bluejays missed them all — a string that continued until Faith Lubischer’s made 3 with three minutes left in the game. Pierce finished the night making 5 of 33 shot attempts, including 1 of 19 from the 3-point line.

The Bluejays outscored Norfolk Catholic 9-6 in the fourth quarter, but the deficit was too large as the Knights closed out the 35-15 win.

“I thought we made it tough for them in the full court and got them pushed out a ways and really had them scrambling much of the night on the offensive end,” Kassmeier said. “Even though we were in a zone, we wanted to match up with the person in our area, using a little bit more of man-to-man principles. I thought we did a really good job of talking and finding where people were at.”

“Then, we rebounded the ball extremely well,” he said. “That was big. I think we limited them to one shot a bunch of times, and we were able to get out and run a little bit.”

“Carly was really good for us tonight. She got a couple steals that she turned into layups,” Kassmeier said. “She also made good decisions with the basketball for the most part.”

Zoe Brenden scored eight points for Pierce, which finishes its season at 9-12.

Norfolk Catholic will now await the seeding of the 16 teams qualifying for district play, including 12 subdistrict winners, along with four teams atop the power-point standings. District finals will be played Friday, Feb. 28, at sites to be determined.

“We’re going to know who we have by tomorrow, we’ll get some film and have a pretty good game plan of what we’re going to need to do,” Kassmeier said. “I like what we have, and I think we’re going to be able to play zone or man. Our confidence level is pretty good right now. We believe we can play with people.”

Because of the coronavirus, Norfolk High School has officially shut down all activities for the 2019-20 school year. As a result, the seniors who would have participated in a spring sport will miss out on their final chances to play at the varsity level before moving on with their lives.

Growing up in the 1970s, one of my favorite things to do was to go roller-skating every Saturday afternoon. The rink would be packed with kids, great music would be playing, the disco ball would throw lights for us to follow across the floor, I’d fall down trying to do the limbo, my friends …