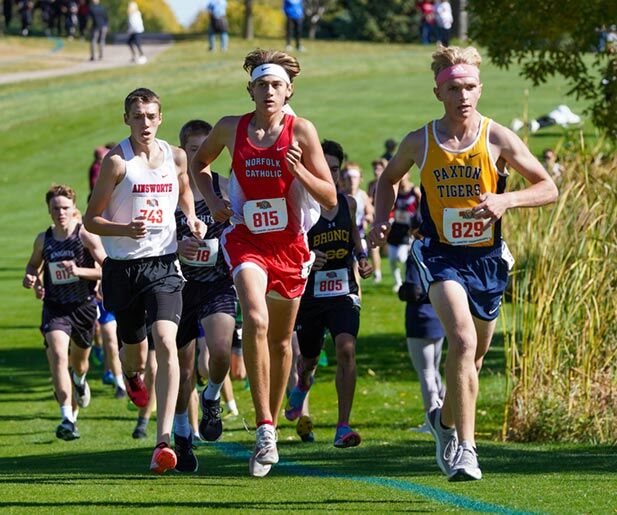 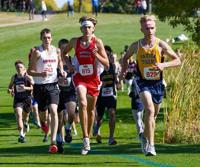 Ben Hammond of Norfolk. Catholic and Tylan Schlueter of Ainsworth 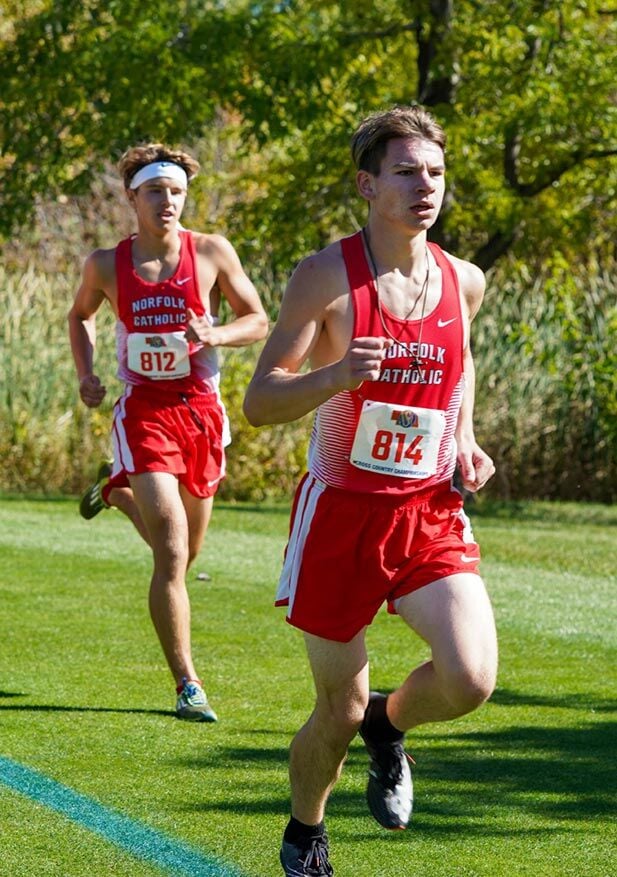 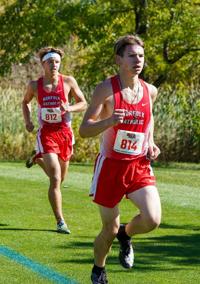 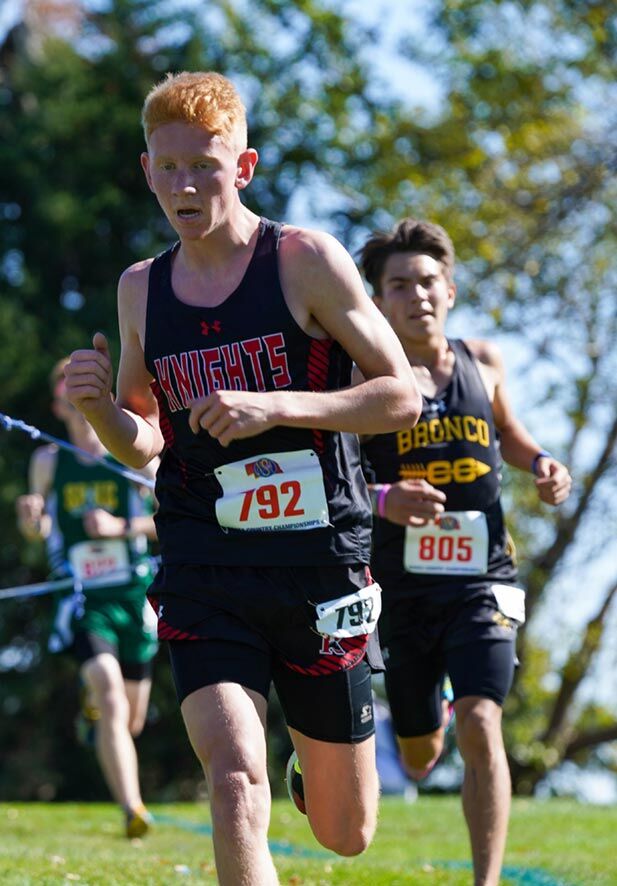 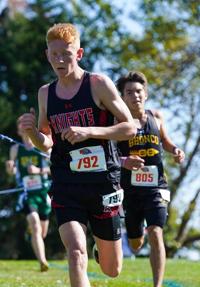 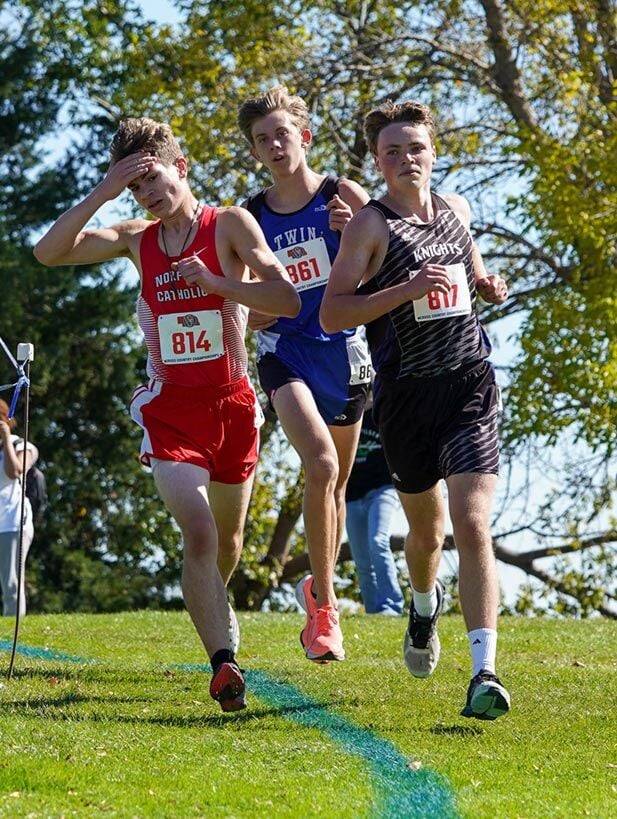 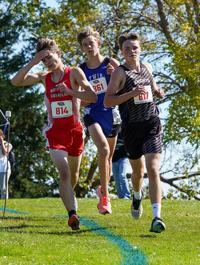 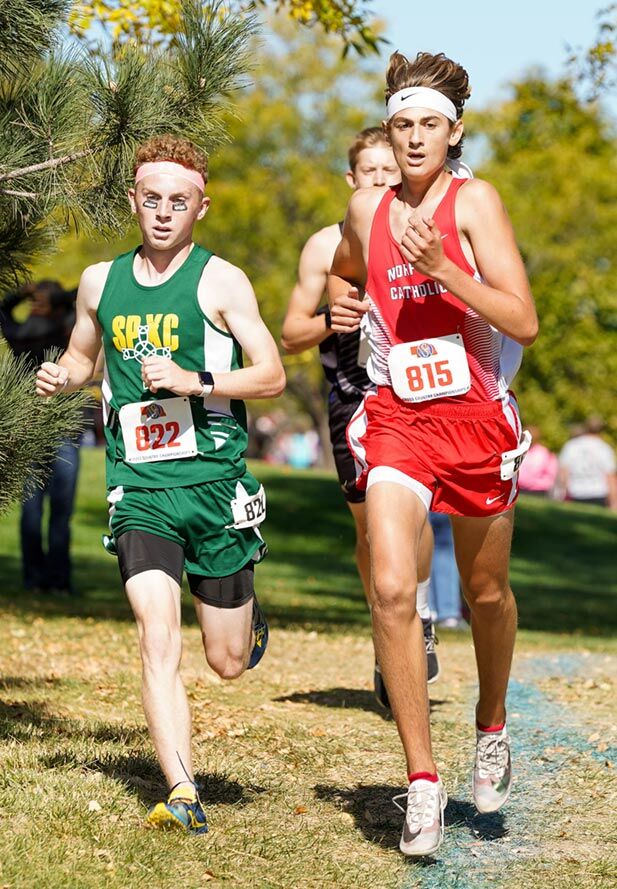 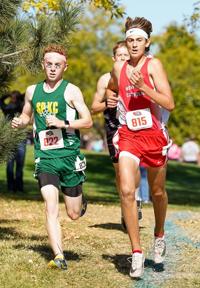 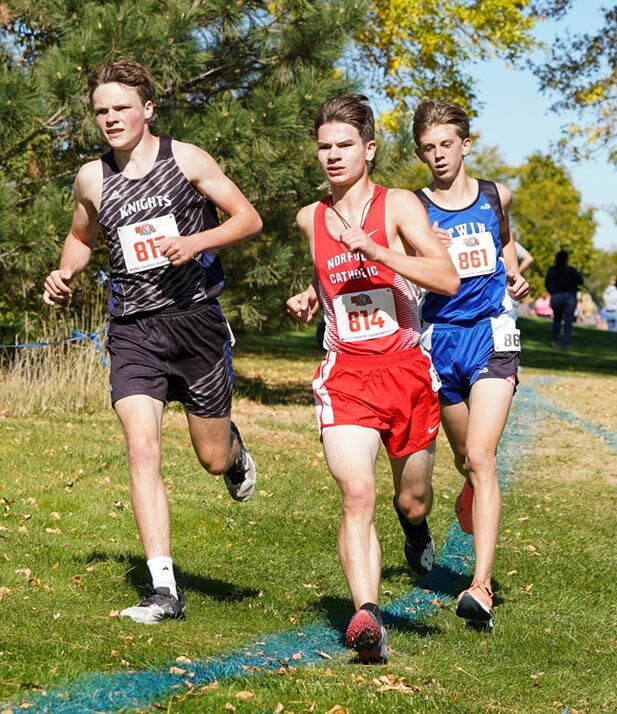 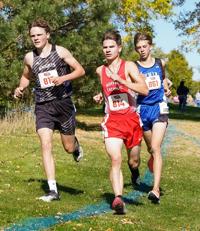 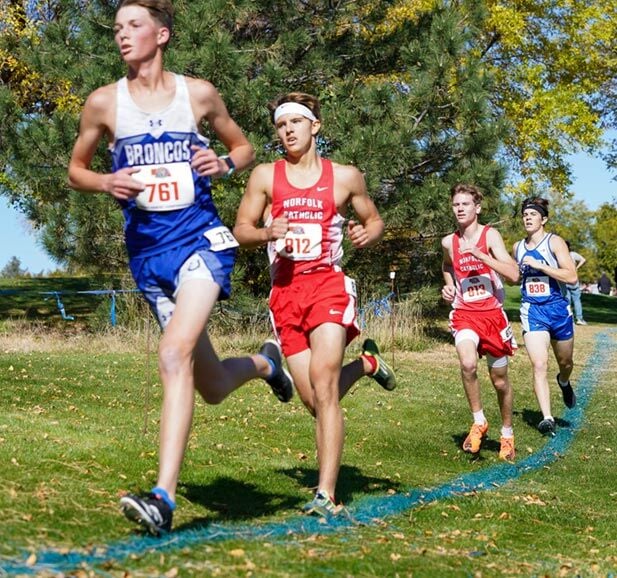 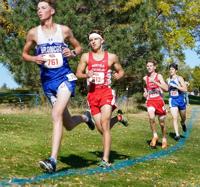 Ben Hammond of Norfolk. Catholic and Tylan Schlueter of Ainsworth

Norfolk Catholic ran away from the Class D field with 19 points compared with almost double that from McCool Junction, which ended with 39.

Spirited Knights coach Jon Krings was ecstatic about the title and offered his theory about running cross country.

"Cross country is often looked at as an individual sport," Krings said. "These guys worked together, pushed each and did this together — this is a team."

Ben Hammond, who was the top finisher for the Knights, agreed with his coach.

"We have really come together this year," Hammond said. "We work together, some of us older guys want the younger guys to learn what needs to be done to get better."

Krings, Hammond and Trey Foecking, along with fellow senior Dalton Brunsing, ended up second as a team last season but took the extra leap this year.

"We felt like coming into this meet, we had a good chance," Krings said. "But you never know what can happen here — we really came through."

Hammond, who finished seventh last year, put his best foot forward and, along with Foecking and Brunsing, took the team to the next level.

"We didn't want this to get away from us this year," Hammond said. "We were focused on bringing home the trophy."

"They really put in the work," Krings said. "They led this team and next year's team and teams to come by showing the work needed to be as good as they have become. They have been great, great leaders."

After finishing just five points out of first last year, the Knights made sure they would enjoy the top spot this season.

Individually, Hammond was fourth, Foecking was 10th and Brunsing ended up 25th.

In the team race, which excludes the individual qualifiers, Hammond was second, Foecking was sixth, Alec Foecking, a sophomore, was 12th, while Brunsing was one spot behind at 13th and junior Nolan Thramer was 18th.

"We are going to miss our seniors," Krings said. "But they have left our guys with the work ethic to keep improving. They have been the best."

Individually, Ainsworth senior Ty Schlueter improved on his silver medal last year to take the gold back to Ainsworth this season.

"He's really an All-American kind of kid," Bulldog coach Jared Hansmeyer said. "It sounds cliché, but he really is a better kid than he is a runner — and he's a great runner."

Schlueter is another in a line of great runners in Ainsworth and paced the Bulldogs to a fifth-place team finish with 74 points.

"I tried to show my teammates how hard work pays off in the end," Schlueter said. "I hope I did, and I hope they get better than I ever was."

"When he gets to work," Hansmeyer said, "he can be right up there with the best of them — good student, good kid, he'll be missed around here."

North Central had a pair of runners bring back hardware, Raden Orton placed in the top individually at fifth while Mason Hagan came in 12th.

The junior and sophomore will return to improve next season and hope to bring the entire team to Kearney to compete.

"We had harder competition than last year. It was warmer. The temperature made a big impact on what we did today. I'm not too happy with how I did but just got to accept it because we had more competition," Van Pelt said. "If I'm going to get beat by anyone, I'm happy to get beat by Abe (Larson). He got me right at the finish. We were just neck-and-neck the entire race."

The duo also finished high in the D-2 district meet, with Van Pelt in second and Larson in fifth.

As for the team race, Krings and Norfolk Catholic see their state title as a building block for the future.

"We couldn't be happier," NC's Krings said. "We worked so hard and achieved what we set out to do this year. We'll enjoy this and get back to work — this is really great for all of us."