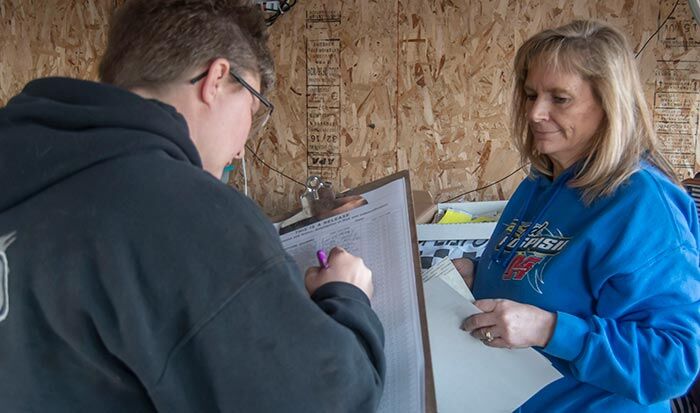 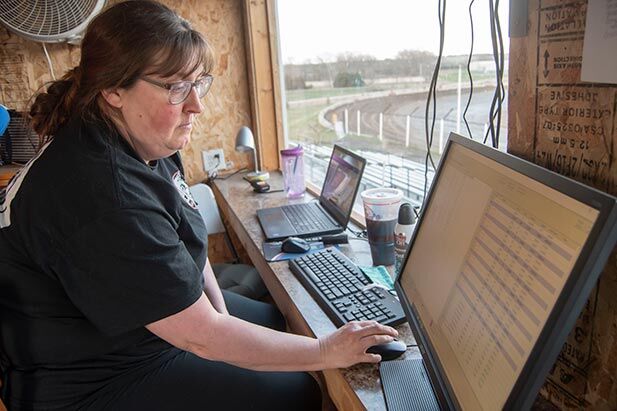 THERESA HAWTHORNE monitors scoring during a regular night of racing.

THERESA HAWTHORNE monitors scoring during a regular night of racing.

The Off Road Speedway brings in drivers from around the Midwest to compete at the Sport Mod, Hobby Stock and Street Stock divisions. Every Saturday night during the season, times get recorded from races for the drivers and spectators to see after races. This sounds like something easy to do, but it's a job that takes concentration, precision and commitment.

For Robin Pospisil, Theresa Hawthorne and Janet Haase, this is something they enjoy doing and they see themselves being up in the booth together for years to come.

During the summers, the trio arrive to Off Road Speedway for another Saturday night of racing.

"In the summer it's racing season," Pospisil said. "It's a way of life."

They start the evening by signing all of the racers in, so they then can go up to the booth to program the number of heats and get them in the right order to race.

Before the races get underway, they make sure each car has its transponder in the correct spot on the car, which allows them to see the speed that the car is going and sets up what place they are in.

During a race when drivers are in the heat of the moment and cross the loop on the track, a wire buried underneath the track between the flag stand that goes across the track will pick up the transponder. It will then record the speed, the position and power of the car, and it all gets sent to the computer system up in the booth

Pospisil, Hawthorne and Haase also write everything down by hand just in case the system makes a mistake.

"It gets to be a little stressful because you get drivers yelling at you, but it's a good time," Hawthorne said.

The times of each race are then uploaded to the MyRacePass website where drivers can see the times. The top five finishers will be shown on the scoreboard outside, right next to the track for all of the spectators to see.

The system they use is a lifesaver when it comes to getting all of the data out to drivers and spectators, which makes life easier on the women in the booth.

"It's nice that we work as a team," Pospisil said.

When Riviera Raceway closed in 2014, the three were asked to work together in the booth at Off Road Speedway a year later and they have been doing it ever since.

"I had never done stock cars before I came here in 2015, but it's been fun," Pospisil said.

If the three weren't in the booth, they would still be at Off Road every Saturday in the summertime since they are all part of racing families.

"It's in our blood," Hawthorne said. "If I'm not going to be up here, I would still be in the stands."

LINCOLN — Jonah Bradley is taking another step in pursuing his dream.

Couple living dream of working in ministry together

Despite its challenges, the year 2020 has provided a grand display of God’s provision, at least where Kiah and Courtney Jackson are concerned.

There was plenty of action on the track during the Don Weyrich Classic on Wednesday night at Off Road Speedway in an event held to honor Norfolk’s longtime driver and member of the Nebraska Auto Racing Hall of Fame.

Pierce Fire and Rescue adds airboat to its arsenal

The Pierce Fire and Rescue Department’s new airboat is fast, powerful and able to be maneuvered.

Norfolk gets a win in second game over Hastings

Norfolk coach Darrel Bradley got a chance Wednesday evening to see what his team was made of and liked the results.

Listed below is the 24-hour rainfall in inches as of 7 a.m. Wednesday in area communities.

"Mary used to have a little lamb. It grew up!"

Janyce Warneke
was this week's winner.