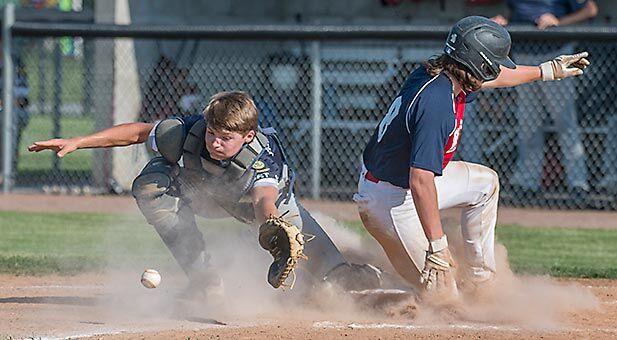 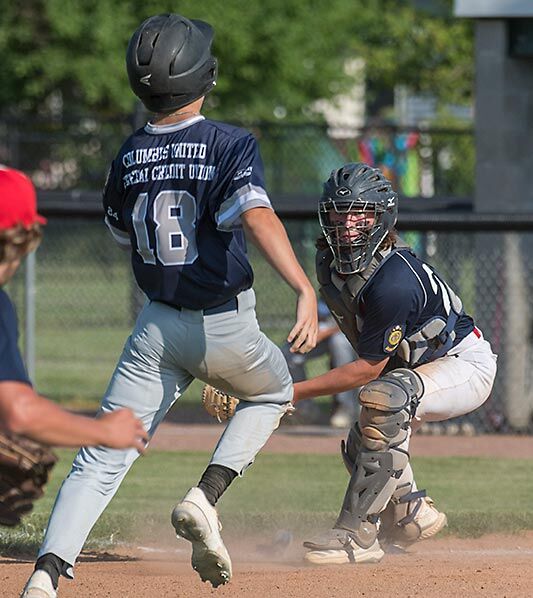 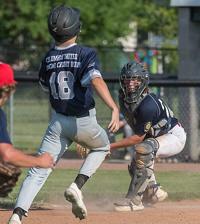 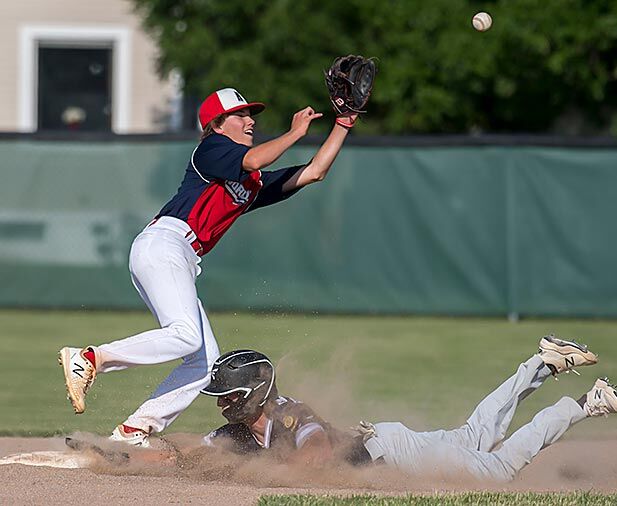 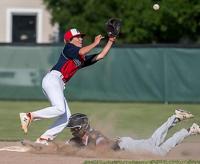 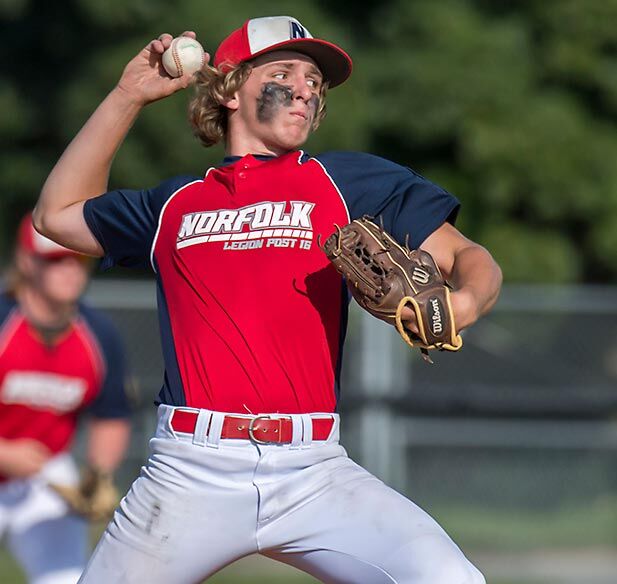 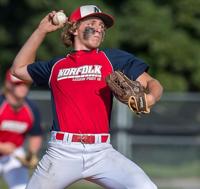 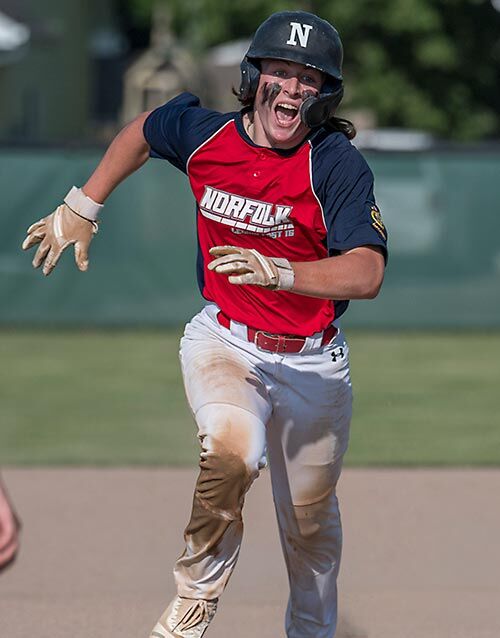 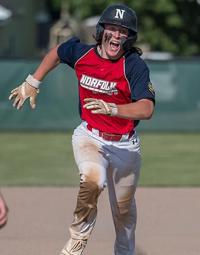 Norfolk Juniors' Easton Sullivan (2) dives back to first as Columbus' Nick zoucha (8) looks for the tag Tuesday, June 15, 2021 in Norfolk. 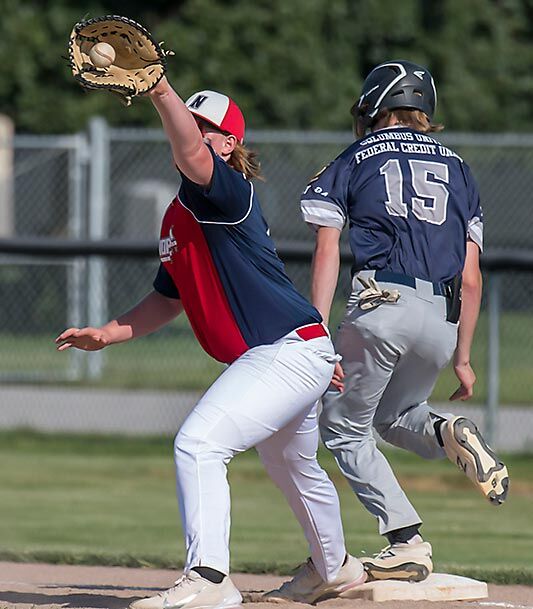 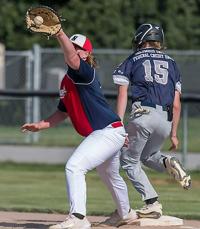 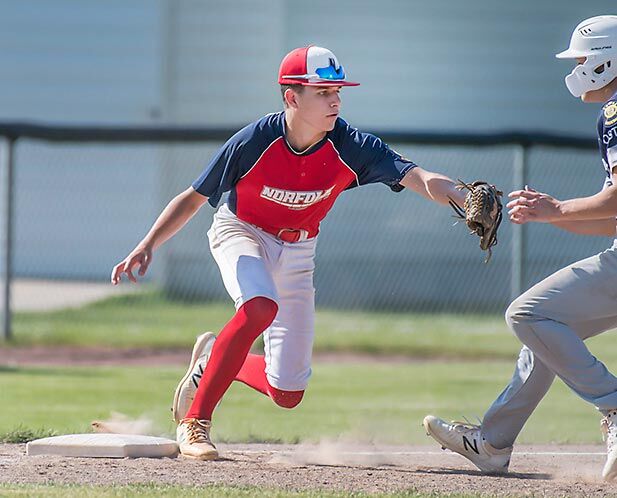 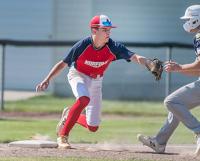 Norfolk Juniors' Easton Sullivan (2) dives back to first as Columbus' Nick zoucha (8) looks for the tag Tuesday, June 15, 2021 in Norfolk.

The Norfolk Post 16 Faith Regional Physicians Orthopedics Juniors overcame a sluggish start on Wednesday to split their doubleheader with Columbus Blues 17U team, losing the first game 11-1 and winning the second game 13-1.

Columbus got the scoring started early in the opening game. Up in the count 1-2 with two outs and a runner on first, C.J. Hoffman allowed a double into the gap of left center field. That would be all the damage allowed in the frame, but he wouldn’t even get out of the second as he allowed six runs to 10 batters. It would turn out to be all the Blues needed for the win.

The Juniors not only struggled to field cleanly and hit consistently, but there were often moments where the energy seemed lacking. With a chance to get something going in the bottom of the third and Sawyer Wolff on first, Easton Sullivan blooped a single into shallow right field. However, Wolff failed to slide into second and was tagged out easily to deaden the rally.

“I don’t make any excuses for anybody, but we just came up with low energy. That’s what it was. We didn’t have any urgency,” coach Jerrett Mills said. “We didn’t have any type of approaches at the plate, and we were just flat.”

Norfolk’s lone run in the contest came in the bottom of the fourth when Anden Schold doubled in Carter Ramaekers from first base. Hoffman allowed seven runs on seven hits while striking out three and taking the loss.

As soon as the nightcap got underway, energy no longer seemed to be an issue. With the bases loaded and no outs in the top of the first, Wolff scored on a wild pitch, Sullivan scored on a fielder’s choice and Ramaekers scored on an error by the shortstop to give Norfolk a 3-0 lead after the frame.

The Juniors added one more run in the second and two more in the third. However, they broke the game wide open in the top of the sixth. First it was a single by Hoffman, then a fielder’s choice that allowed Sullivan to score. Schold and Caden Schick each added an RBI double, and a passed ball allowed Dylan Viergutz to cap things off.

A big offensive difference between the two games was Norfolk’s ability to drive home runners in scoring position, which came in bulk throughout the nightcap.

“I think once we’re able to do that, things really work out well for us,” Mills said.

The inning was emblematic of a great turnaround, but Sean Barrett played as much a part of it as the offense did. In five innings pitched, Barrett allowed one run on two hits and struck out two. He also induced seven flyouts and was credited with the win.

According to Mills, Barrett is effective when he gets ahead in the count, which he did a lot of on Wednesday.

“He doesn’t throw as hard as everybody else, but it doesn’t matter,” he said. “He’s able to get groundballs and let the batters get themselves out.”

Norfolk travels to Wahoo on Friday to begin a weekend tournament.

WINNEBAGO — The highway that spills into Winnebago is lined with miles of construction. In the tribal village, cones line nearly the entire stretch from Twelve Clans Unity Hospital past Ho-Chunk Plaza and farther beyond.

The legend of the Whealymen

Keeping my head out of the clouds

I’m not quite sure why I don’t really remember the event. I was almost 8 years old, so I can’t claim age as the reason. After all, some people claim to have memories from when they were as young as 2 or 3. I won’t get into whether I believe this. It doesn’t really matter because I do believe…

If you have younger children with dreams of appearing on stage, the Norfolk Arts Center is offering them the spotlight.