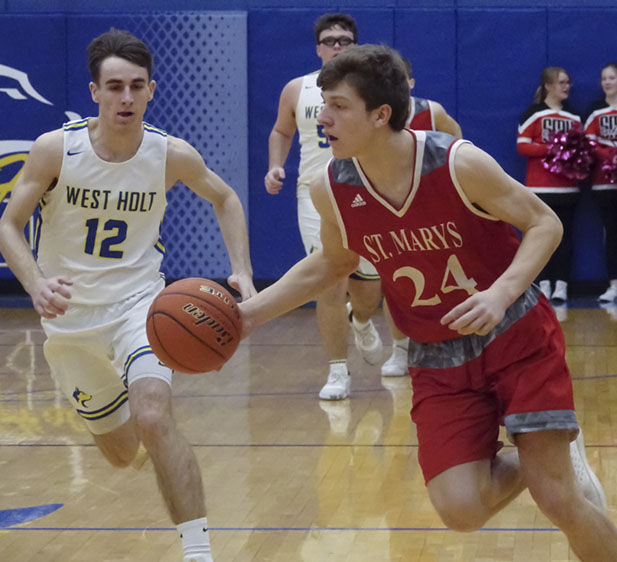 NICK BENES/DAILY NEWS Aidan Hedstrom of St. Mary's veers toward the lane as Garrison Hansen of West Holt pursues him during Thursday's game in Atkinson. 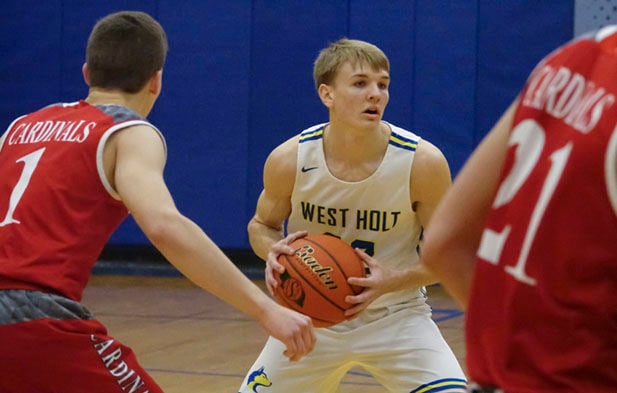 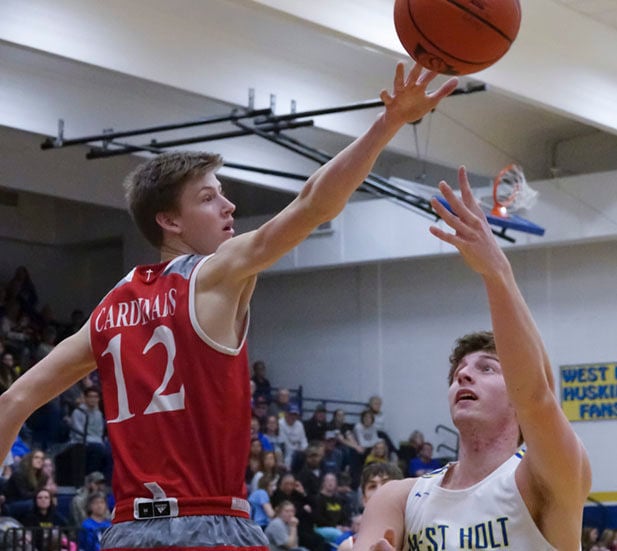 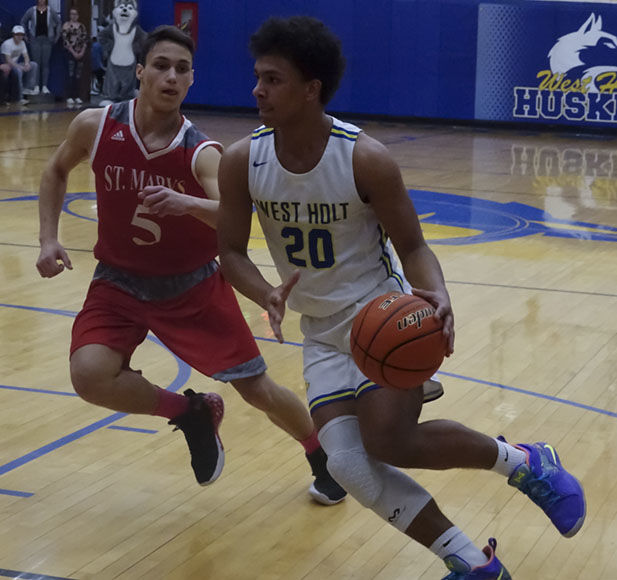 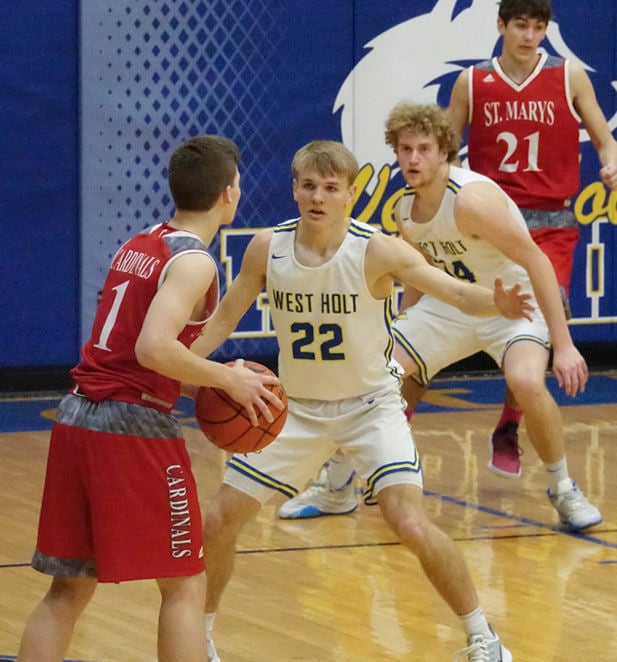 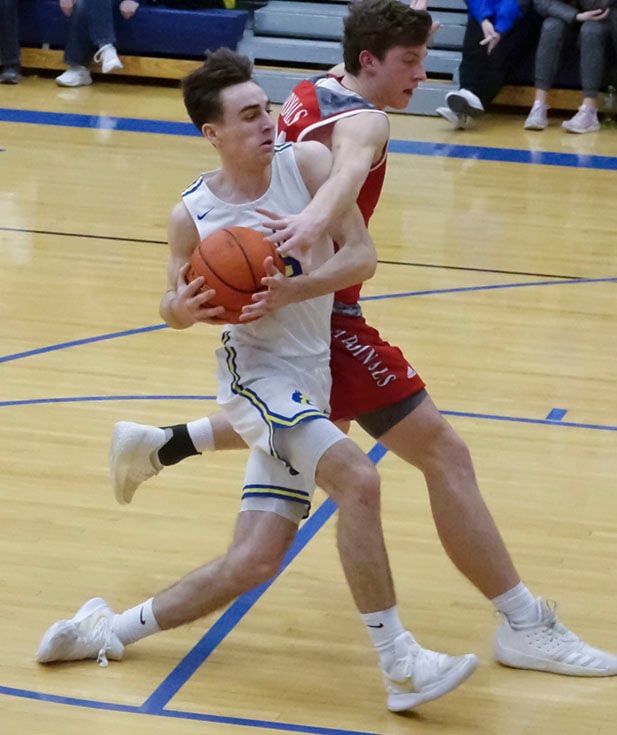 NICK BENES/DAILY NEWS Aidan Hedstrom of St. Mary's veers toward the lane as Garrison Hansen of West Holt pursues him during Thursday's game in Atkinson.

Class D No. 8 West Holt got a buzzer-beating layup to end the third quarter and tip off a game-changing 12-2 run, and the Huskies hit enough free throws down the stretch to top No. 7 St. Mary's 61-56.

“Our kids just stepped up and were a little bit mentally tougher tonight than they were Saturday,” West Holt coach Todd Hale said.

Until Saturday's league championship, the Huskies had won 13 straight since a Dec. 21 meeting at Battle Creek, including a perfect 9-0 against NVC teams. But West Holt entered Thursday on the heels of a one-point loss to Niobrara/Verdigre two days earlier — a team it had defeated by 19 in the conference semifinals.

“I think it was huge, because if you drop this one, then we would have dropped three in a row, and that can kind of ruin your confidence,” Hale said. “We don't have a game next week, so I'm not saying that this will carry us into subdistricts, but it'll carry us into the practices next week.”

On Saturday, the teams played to a 56-53 game claimed by the Cardinals.

“It was pretty identical to that game, and we knew it was going to be,” St. Mary's coach Luke Bulau said. “They're a good ball team. They're well-coached. Our guys knew they had to be focused for four quarters, and I thought that, the first three for sure, we were.”

Ethan Shoemaker curled around the left side of the lane and hit a short jumper from the side to give St. Mary's a 44-42 lead with time running out in the third quarter. It was just enough time for Jakeem Brown to take the inbounds pass down the left side of the court, and as he stepped into the lane, he tossed the ball up in the air as he stumbled to the ground for a layup as the horn sounded.

Joseph Seger hit from down low, and then Hansen connected on a layup for a four-point lead. St. Mary's momentarily split the advantage in half, but Aaron Kraus hit two free throws to begin a run of six straight points that put West Holt in charge.

“We kept it at two possessions, and that's a lot more comfortable to shoot free throws that way than it is if you only got a one-possession lead,” Hale said.

“We were able to finish for once,” Hansen said. “We were talking about that for a while. We've struggled staying under control and finishing the basketball game.”

St. Mary's enjoyed a balanced offensive night. Aidan Hedstrom led with 13 points, while Semin and Adam Everitt added 12 each. The Cardinals were charted with 50 percent (19 of 38) field-goal shooting, including eight 3-pointers.

West Holt is off until subdistrict play, while St. Mary's hosts Elgin Public/Pope John in its regular-season finale next Friday.

“It's just two good ball teams 18 miles apart getting together on a Thursday night,” Bulau said of the game against West Holt. “This is just what you want. This is high school basketball. But again, we learn from this, and then we move on.”