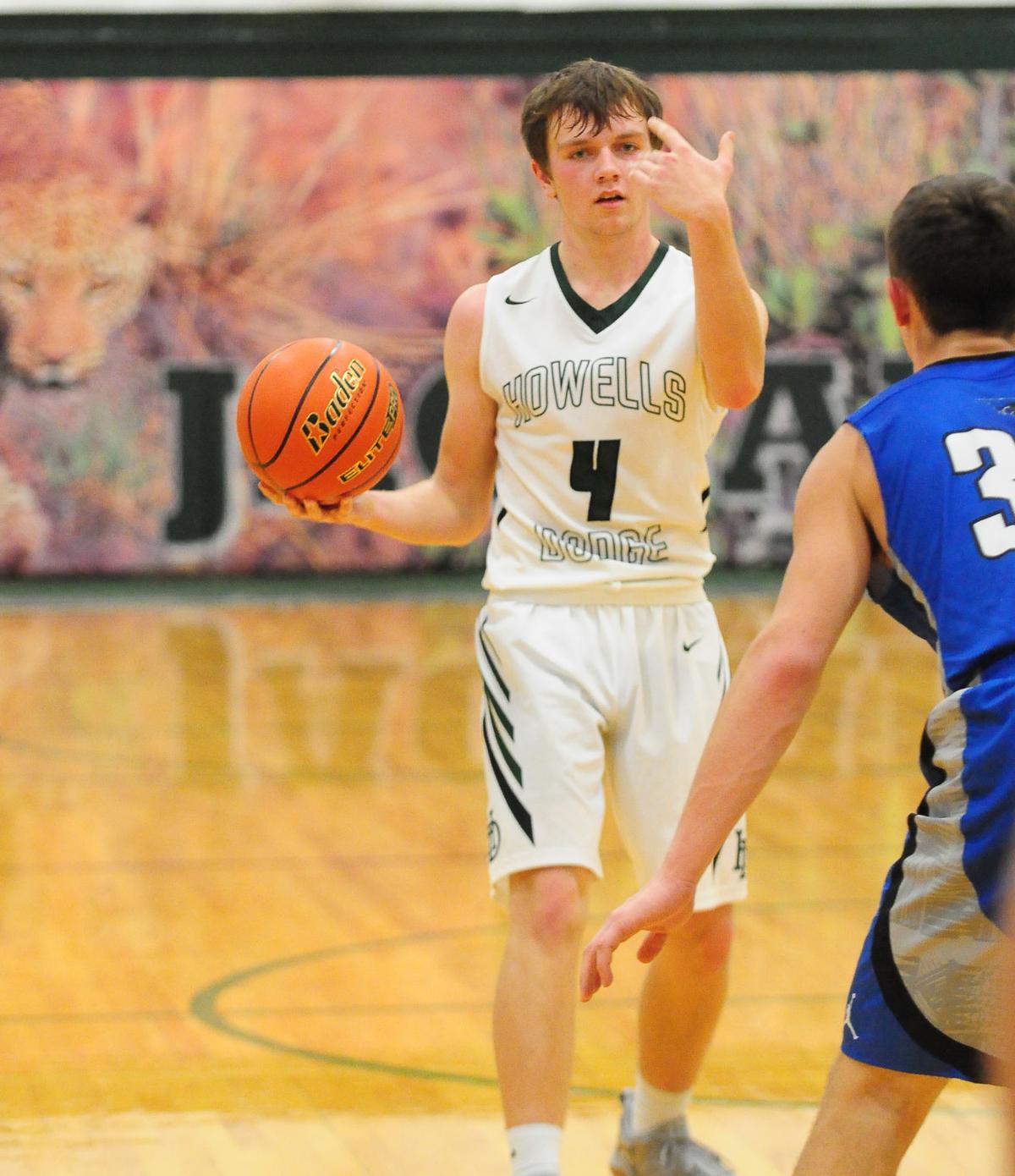 Charlie Dvorak of Howells-Dodge motions for a teammate as Dalton Freeman of Pierce defends during Thursday's game in Dodge. 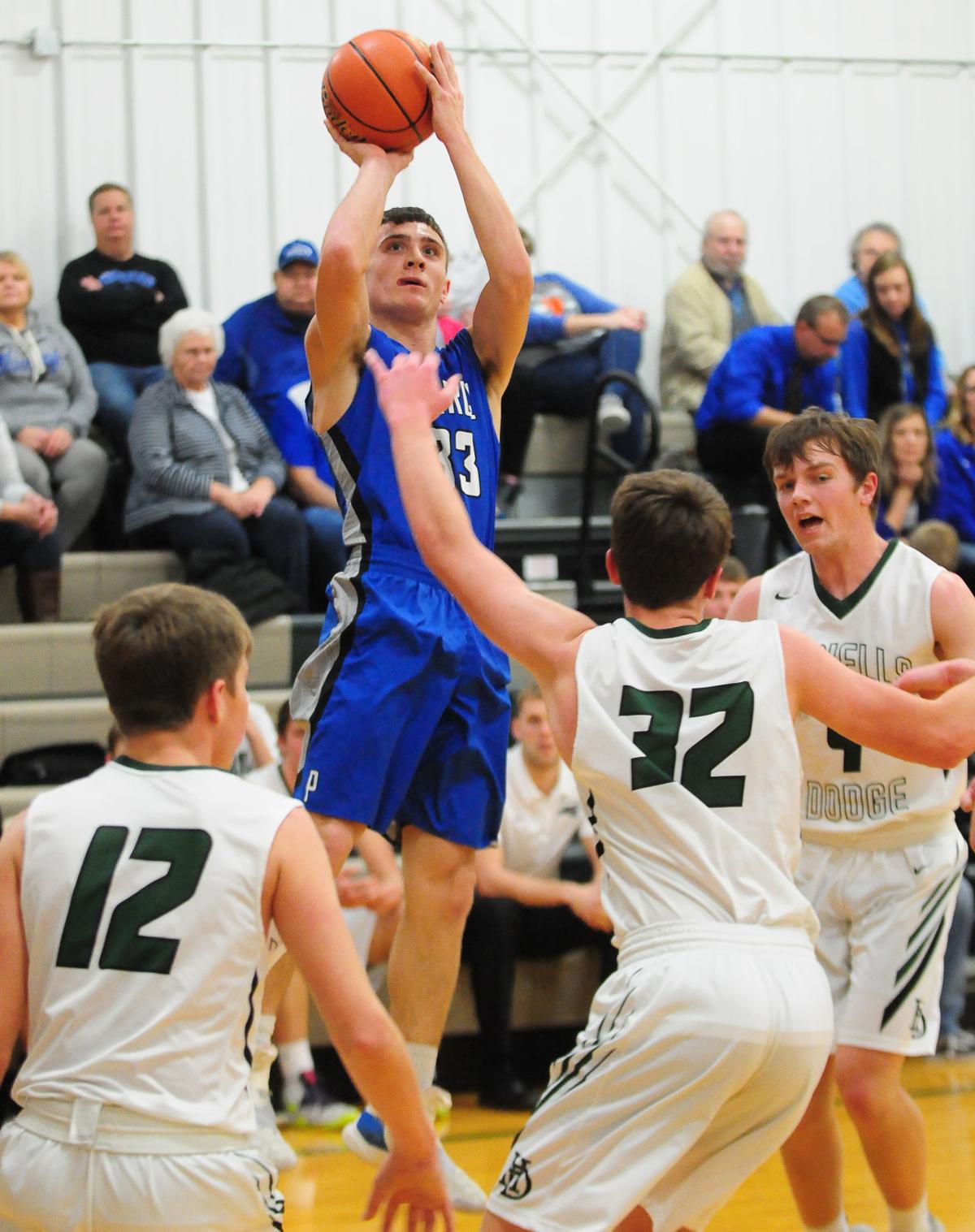 Dalton Freeman of Pierce puts up a midrange shot as Austin Steffensmeier (32) of Howells-Dodge defends during Thursday's game in Dodge. Also in on the play are Jacob Tomcak (left) and Charlie Dvorak of Howells-Dodge. 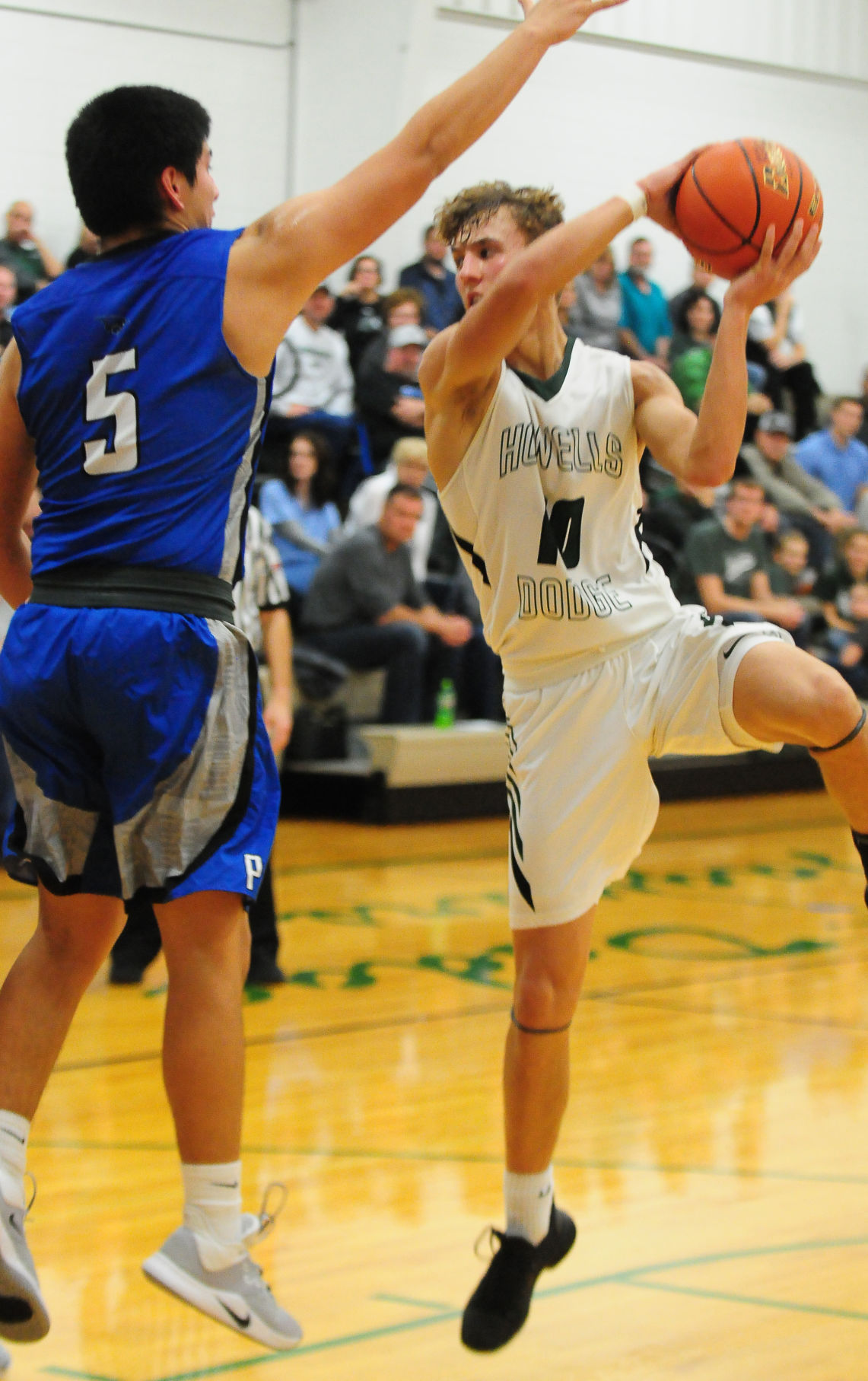 Luke Rocheford of Howells-Dodge passes away from David Dale of Pierce during Thursday's game in Dodge. 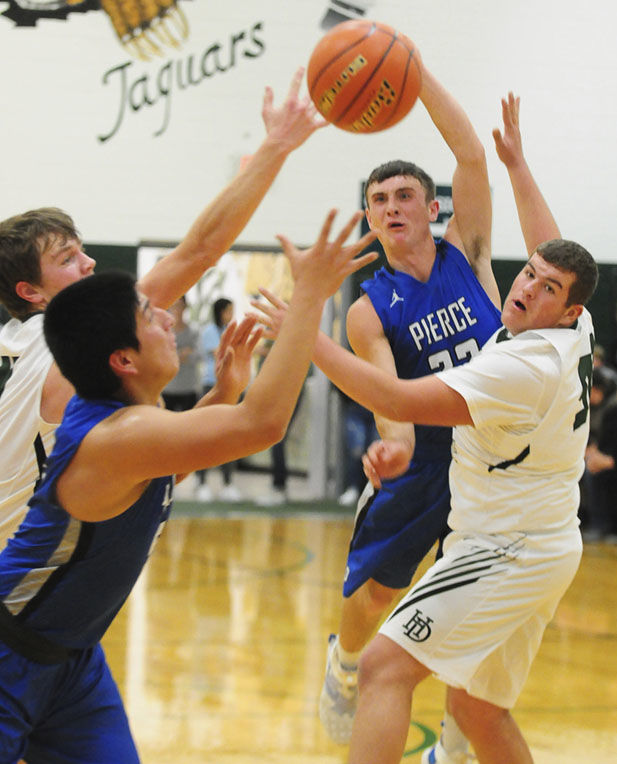 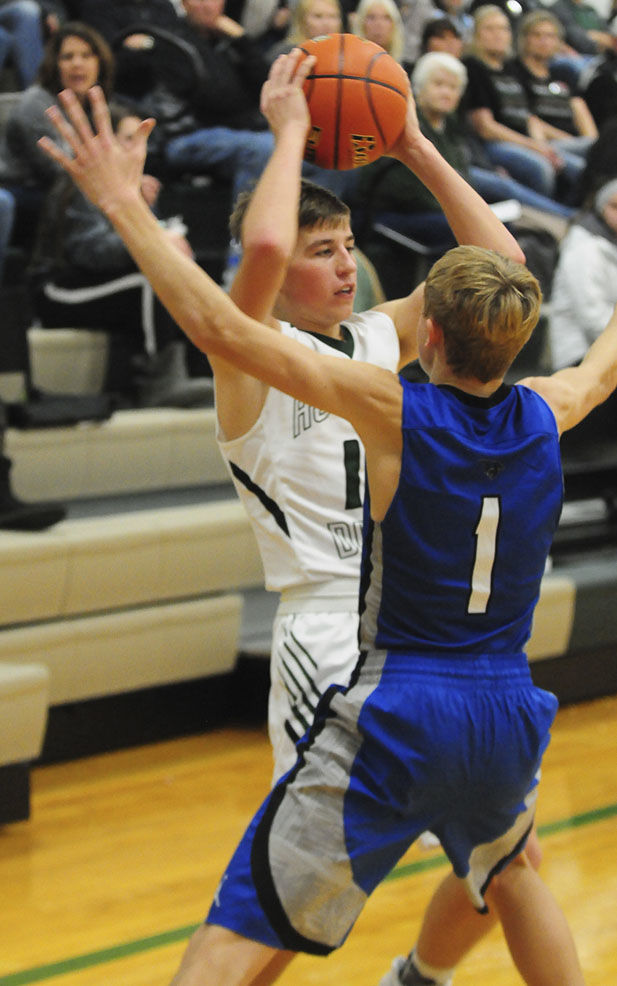 NICK BENES/DAILY NEWS Jacob Tomcak of Howells-Dodge looks to pass against pressure applied by Logan Moeller of Pierce during Thursday's game in Dodge. 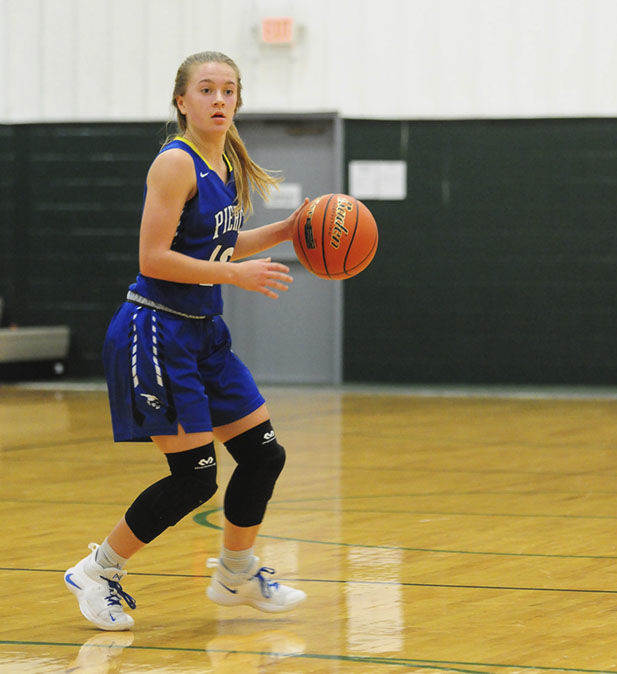 NICK BENES/DAILY NEWS Kenzie Moeller of Pierce looks for an open teammate late in Thursday's game against Howells-Dodge in Dodge.

Charlie Dvorak of Howells-Dodge motions for a teammate as Dalton Freeman of Pierce defends during Thursday's game in Dodge.

Dalton Freeman of Pierce puts up a midrange shot as Austin Steffensmeier (32) of Howells-Dodge defends during Thursday's game in Dodge. Also in on the play are Jacob Tomcak (left) and Charlie Dvorak of Howells-Dodge.

Luke Rocheford of Howells-Dodge passes away from David Dale of Pierce during Thursday's game in Dodge.

NICK BENES/DAILY NEWS Jacob Tomcak of Howells-Dodge looks to pass against pressure applied by Logan Moeller of Pierce during Thursday's game in Dodge.

NICK BENES/DAILY NEWS Kenzie Moeller of Pierce looks for an open teammate late in Thursday's game against Howells-Dodge in Dodge.

DODGE — For a pair of teams shorthanded because of football injuries, Thursday's season-opening nonconference battle was going to go a long way toward establishing early momentum.

But actually establishing that momentum came down to a clutch play in the waning minutes.

After the ball appeared to carom off an official, Howells-Dodge guard Luke Rocheford snatched the loose ball, drove into the lane and drew a foul as he lofted an off-balance shot that went through the hoop. At the free-throw line, Rocheford took advantage to finish off a crucial 3-point play with 1 minute, 39 seconds left to give the Jaguars, preseason rated fifth in Class D, the lead for good in a 50-47 victory over Pierce.

“He's a senior leader. He's our best ball handler. He makes our offense go,” Howells-Dodge coach Kevin Janata said. “I think he sat for about 30 seconds that whole game, so he did a nice job of gutting it out and leading the team to victory.

Both teams were minus a pair of probable starters because of injuries suffered during the fall season. Howells-Dodge was without senior Darrin Pokorny and sophomore Blake Sindelar — who was a starter on the Jaguars' state-tournament team a year ago — while Pierce was minus seniors Carter Rohrich and Carson Oestreich, two of the five returning starters.

“I told the guys, 'Nobody's going to feel sorry for us. It's just next man up,' ” Janata said. “We had some underclassmen step up.”

Although Pierce, the preseason No. 8 team in Class C, had just five practices going into the game, coach Mike Emory said he wasn't concerned about a lack of preparation.

“We've got a lot of depth on this team. We've got a lot of juniors and seniors,” Emory said. “I wasn't overly concerned about that. ... They were shorthanded, too. That's early-season basketball when you've got good football programs like these towns do.”

Dawson Watts scored 10 of his game-high 16 points in the fourth quarter, with two 3-point plays in a span of 25 seconds to flip the lead. His first conventional 3-point play put the Bluejays within two with 2:56 to play, and after a Dalton Freeman steal and pass, Watts converted again to give Pierce a 47-46 lead with 2:31 on the clock. But Watts fouled out 16 seconds later, and Pierce did not score again.

Following Rocheford's answer with 1:39 left, the Jaguars managed just one point the rest of the game: Rocheford going 1 for 2 at the free-throw line with 36.4 seconds left when Freeman fouled out. After a Pierce missed shot, Howells-Dodge missed one-and-one chances with 20 seconds left and again with 3.5 seconds left around a Pierce missed 3-point attempt. Following the latter free-throw miss, Pierce's desperation heave from just outside of half-court hit the right side of the rim and bounced away.

“We battled for four quarters,” Emory said. “We could've pulled up shop a couple of times in the second half when they went on mini-runs, but we came back and answered the bell.”

The shooting numbers proved how evenly matched the teams were to begin the season.

“I thought we had good looks all night,” Emory said. “We obviously didn't shoot the ball very well. … We left a lot of points out there in the first half, and then we dug ourselves a little bit of a hole in the second half, but I thought the kids responded very well.”

Charlie Dvorak had a team-high 15 points for Howells-Dodge, including six early in the fourth quarter, while Rocheford had the final five Jaguar points on his way to 10 points to go with game-highs of four assists and three steals. Austin Steffensmeier had a game-high 11 rebounds, including five offensive.

The largest lead all game was just six points, and that was thanks in large part to Howells-Dodge freshman Lance Brester coming off the bench to hit back-to-back 3-pointers early in the second half.

“All the way up and down the bench, we had kids step up and really play hard tonight,” Janata said. “Something had to fall down eventually. Shots were going up and nothing was going in.”

The Bluejays rallied from that to take a 35-33 lead late in the third quarter on Ben Brahmer's putback, only to see the Jaguars' Logan Nelson score from inside the paint just before the buzzer for a deadlock heading into the fourth.

“We've got a lot of kids who can step up and make shots. That's going to be to our advantage down the road,” Emory said.

It capped an offensive explosion compared to the first two quarters. The game was tied at 6 through one quarter and Howells-Dodge led 17-16 at halftime despite hitting just 5 of 16 free throws. The Jaguars finished 11 of 26 at the line, while the Bluejays were 8 of 16.

“I mean, 17-16 at halftime ain't exactly a barnburner,” Janata said. “We just happened to get some shots to fall in.”

In the days before Trackwrestling, dual tournaments and round-robins became popular, winning 100 matches was considered the gold standard for a high school wrestler’s career.

If a football victory can be determined by a matter of inches, the difference in the Lincoln Pius X boys basketball team’s win over the Panthers was a matter of seconds —4.6, to be exact.