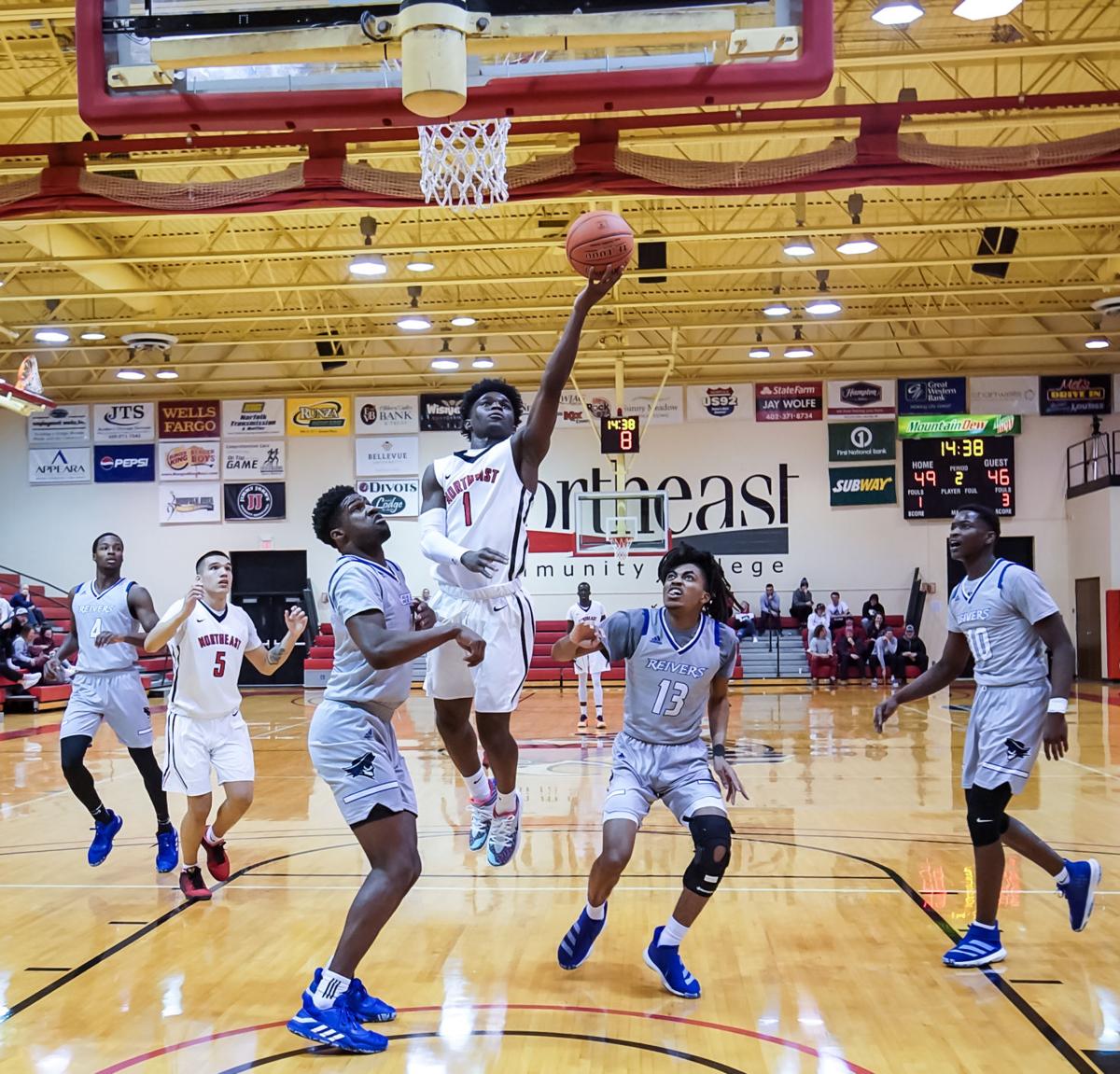 Emmette Page of Northeast goes up for a basket around Iowa Western’s Senesa Louis. 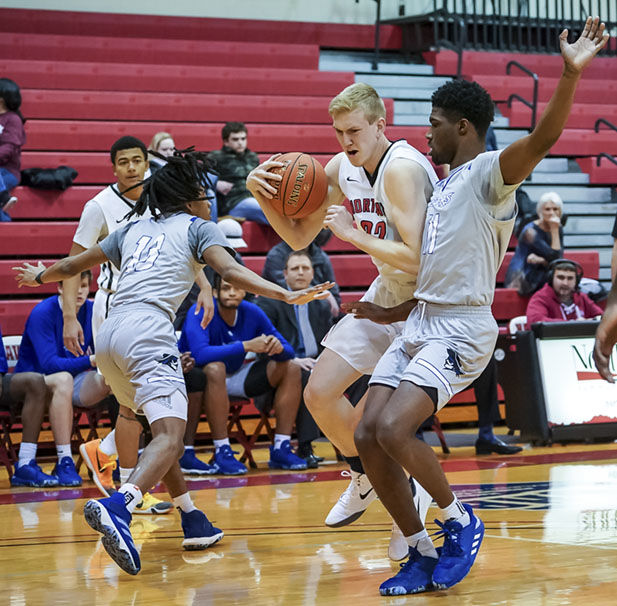 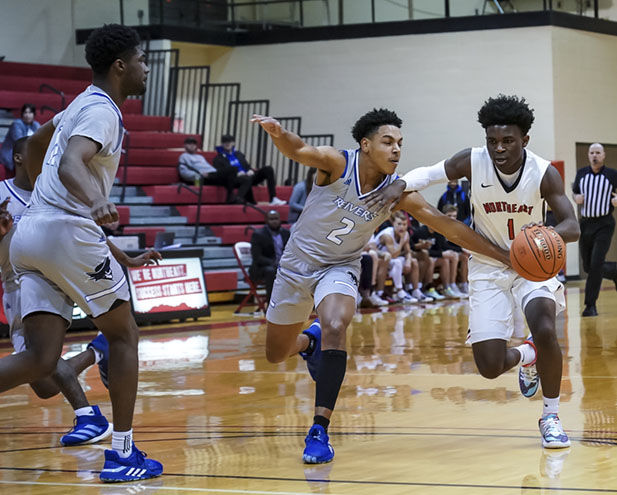 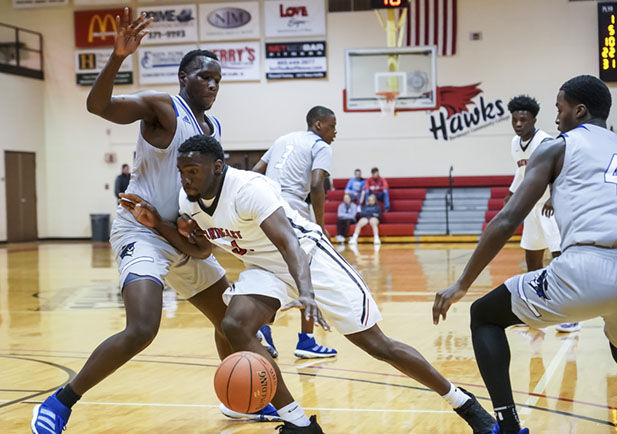 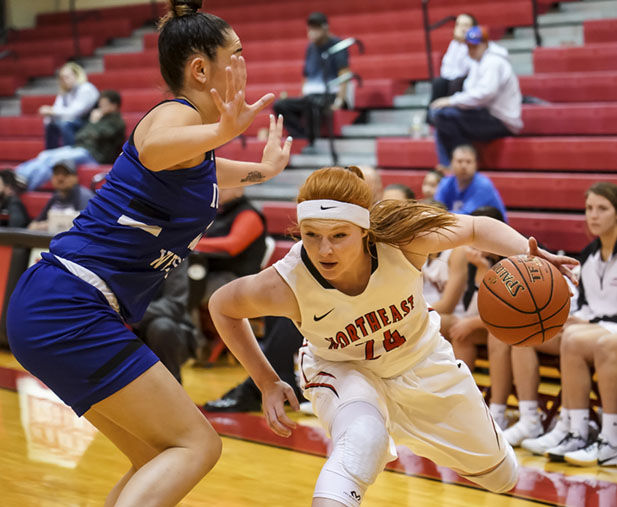 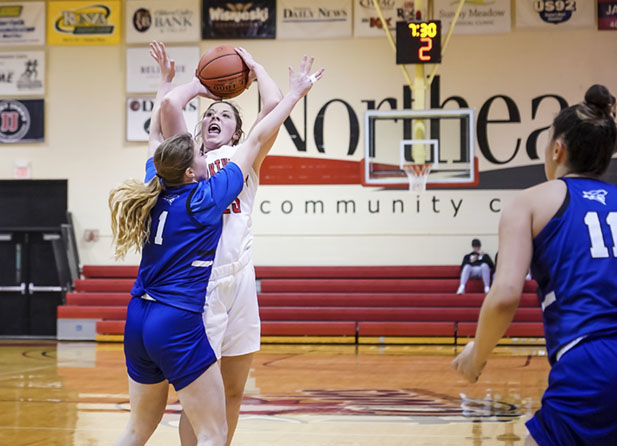 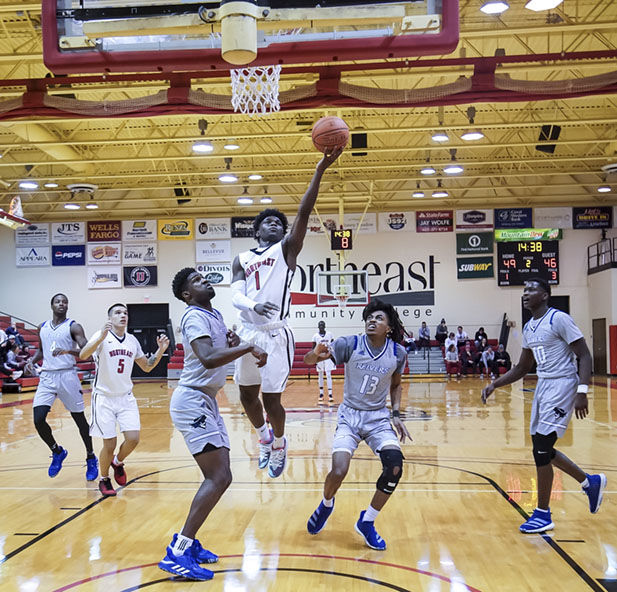 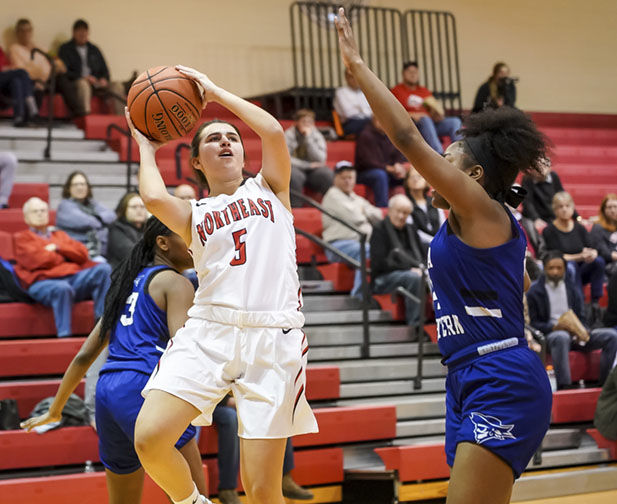 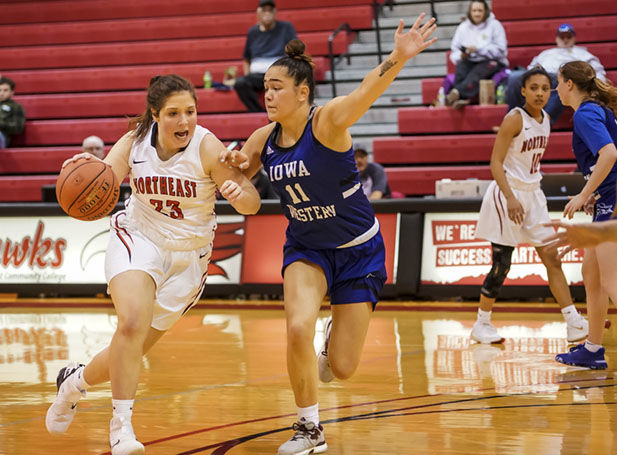 Emmette Page of Northeast goes up for a basket around Iowa Western’s Senesa Louis.

Both Northeast Community College basketball teams picked up huge conference wins Saturday evening — including the biggest of the season for the men’s team.

The Hawks’ 89-83 win over Iowa Western didn’t feel certain until the end. Asher Scavella cashed in four free throws, the last two with 12 seconds remaining, giving Northeast an 87-81 lead. Then Emmette Page sank two more — his 37th and 38th points of the game — with six seconds left as the Hawks clinched a win over their Iowa Community College Conference nemesis.

Earlier, the Northeast women’s team led more than half of the game, with its biggest lead coming after Beth Matas’ eighth and final assist led to a 3 by Lorna Maxon for a 62-48 advantage, but the Hawks still had to hold off a late charge by the Reivers to win 70-63.

Page’s 38 points were certainly a key part of Northeast’s win, but an equally important point total was “two.” Those were the points scored by Iowa Western’s Josiah Strong after Hawks freshman Michael Anderson took on the defensive assignment of guarding Strong — immediately after the sharpshooter had scored 17 consecutive points during a three-minute span to help turn a 53-51 Northeast lead into a 65-59 Reivers advantage with 10 minutes left in the game.

“I kind of looked over at the bench, and they were looking for somebody (to guard Strong), so I just kind of stepped up and took that assignment,” Anderson said. “I just worked hard and did what I could to play with heart, to play hard. I tried not to let him catch the ball. He was hot; he was the game-changer for them.”

Strong’s 17-point flurry had included five 3s and a drive to the basket, but with Anderson defending, his only other basket in the game came over five minutes later, a drive that tied the score at 73 — one of five tie scores during the game’s final minutes. The last at 80 was created by a Scavella basket from the block. Iowa Western then took one last lead at 81-80 on a single free throw by Seneca Louis before Scavella and Page put the finishing touches on the Hawks’ win.

“Emmette was engaged right from the start tonight, and Daniel Akuei did a great job of boarding, came up with a lot of loose balls for us, and hit some crucial big shots,” Northeast coach Dan Anderson said. “And, defensively, Michael Anderson took care of it. He just kind of stopped (Strong). He plays hard.”

Akuei, who pulled down 12 rebounds and also added 16 points, got help on the boards from Scavella with seven and Anderson with six. Scavella also contributed 14 points, while Anderson finished with nine.

“I think it’s probably our biggest win of the season so far; it’s a conference game, first win in conference,” coach Anderson said. “Now if we can get a couple road wins, we’ll host during tournament time.”

“We have five more conference games, and I think we can be in pretty good shape in those games. We have the ability to score points,” he said. “After a win like this, they should play with more confidence, with a little bit more trust in each other. I told them after the game, ‘See what you guys did?’ I don’t know if they realized they could do this.”

IN THE WOMEN’S GAME, Northeast grabbed a 4-2 lead, but the Reivers ran off a 10-0 run before Hawks coach Matt Svehla called a timeout.

“I thought we came out ready to play, but then all of a sudden, they out-toughed us for a while,” Svehla said. “I thought we did a good job of weathering through and staying in it, but that was a test for us.”

Northeast responded by scoring 11 straight points of their own. But following an Iowa Western field goal and a late 3 by the Reivers’ Sommer Blakemore, the Hawks still trailed 17-15 after the first period.

“They had a run, and we had to match it — and we did,” Svehla said. “There were a number of people that were responsible for that, too many to single anyone out.”

The back-and-forth battle, with each team producing short runs, continued throughout the second quarter, as another string of 10 points helped the Hawks to a 33-32 halftime advantage.

Northeast maintained control of the game during the third period, and there were players who made a noticeable difference — point guard Matas, post player Emina Hadzihusejnovic, and Macey Kulhanek with a big impact off the bench.

Matas put up statistics in several categories with two steals — including one that ended in an assist to Hadzihusejnovic and the other in a pull-up 3 in transition — three free throws and two more long pass assists to Kulhanek, who finished both with full-speed layups. Kulhanek also added four consecutive free throws.

Even then, Iowa Western stayed within reach by making a field goal and swishing four 3s. The last, by Blakemore, reduced the Hawks’ lead to 52-46, setting up Northeast’s exciting, clinching fourth quarter of action.

“There were times when I was thinking this game was right where we wanted it, then, just like that, they hit long 3s,” Svehla said.

Matas led the Hawks with 17 points, along with the eight assists. Kyla Moore, despite limited action due to foul trouble, totaled 11 points and four rebounds, while Hadzihusejnovic finished with 10 points and 10 rebounds. Kulhanek also contributed 10 points.

“Beth made some huge plays, and Macey really played well,” Svehla said. “You’ve got to be tough when you play in these games, and I thought Emina really grew up in the second half, got tougher, didn’t get the ball stripped from her in traffic.”

Alisha Shelton is running for the U.S. Senate to “drain the gas out of Ben Sasse.”

LYONS — It was only fitting that Saturday’s girls basketball game between second-ranked Oakland-Craig and third-ranked Bancroft-Rosalie/Lyons-Decatur came down to the last second.

WAYNE — The Wayne State men's basketball team wasted a first-half comeback against Minnesota State University-Moorhead as the Dragons rebounded in the second 20 minutes to finish off an 82-71 win over the Wildcats here at Rice Auditorium Friday evening.

Downtown Norfolk has seen new improvements in recent years, but Russ Wilcox of Real Estate Solutions Team saw the opportunity to be the first to implement a new idea.