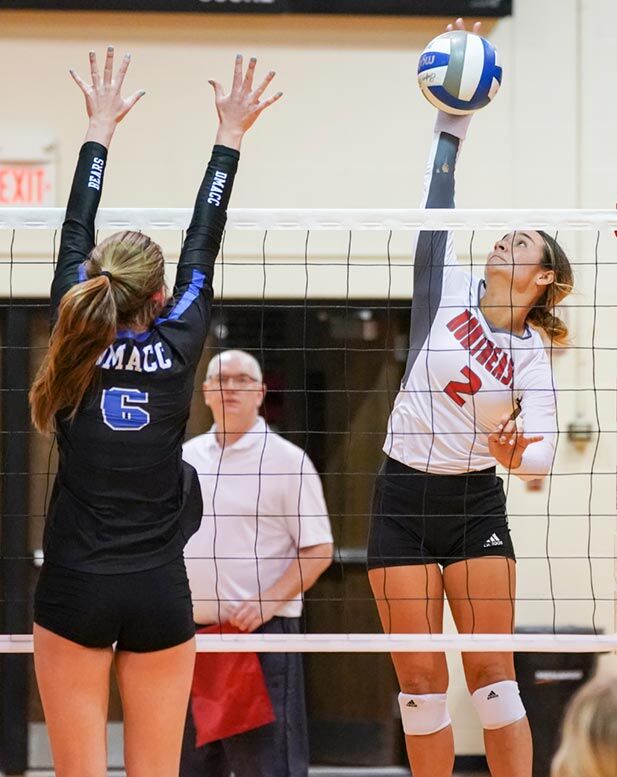 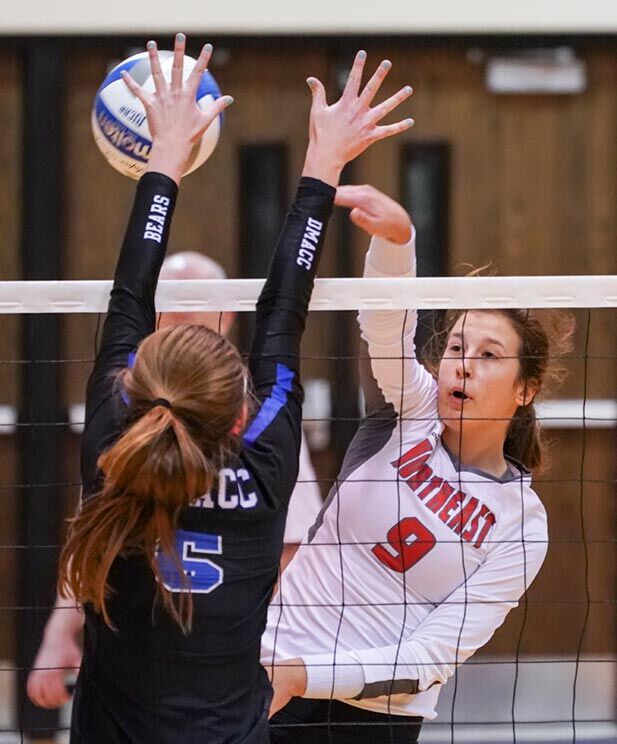 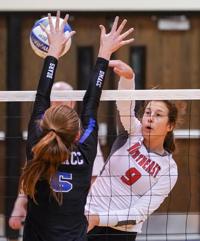 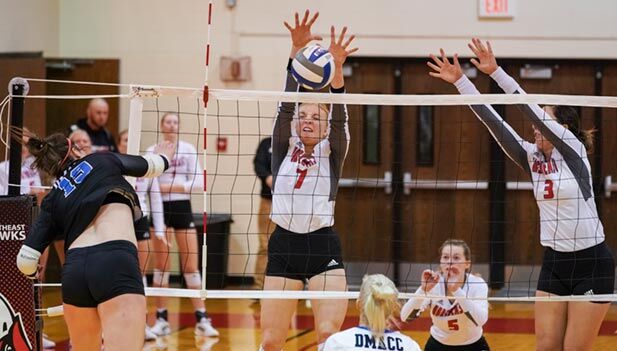 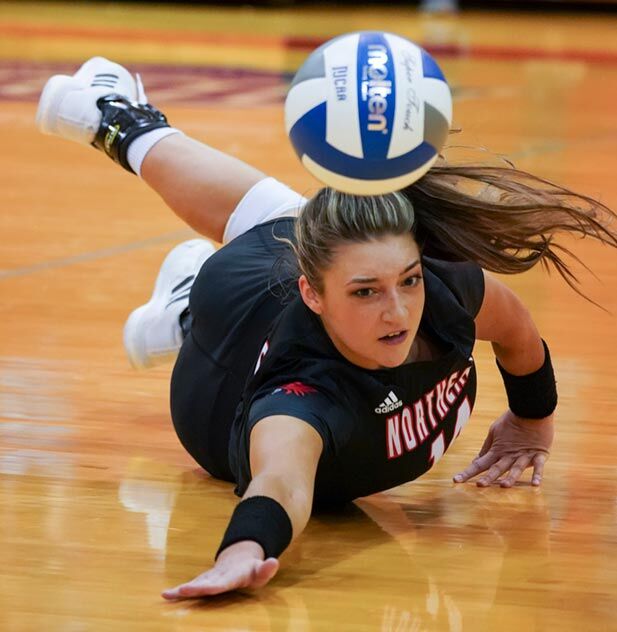 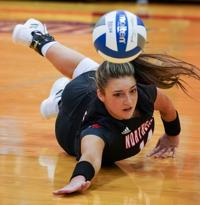 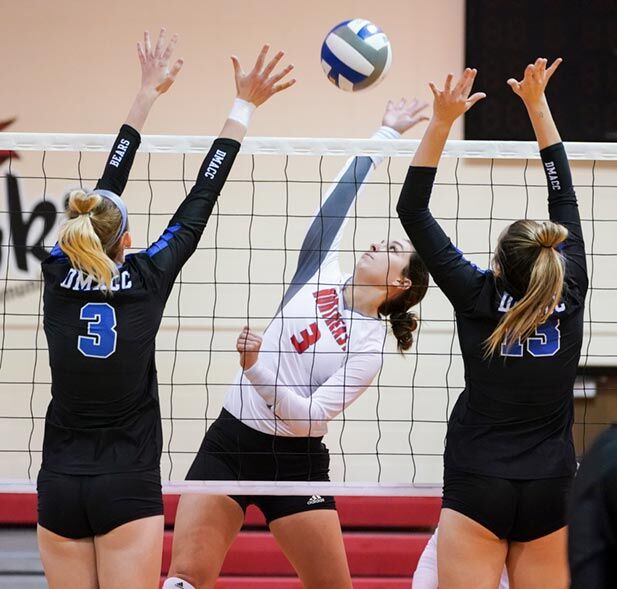 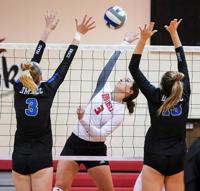 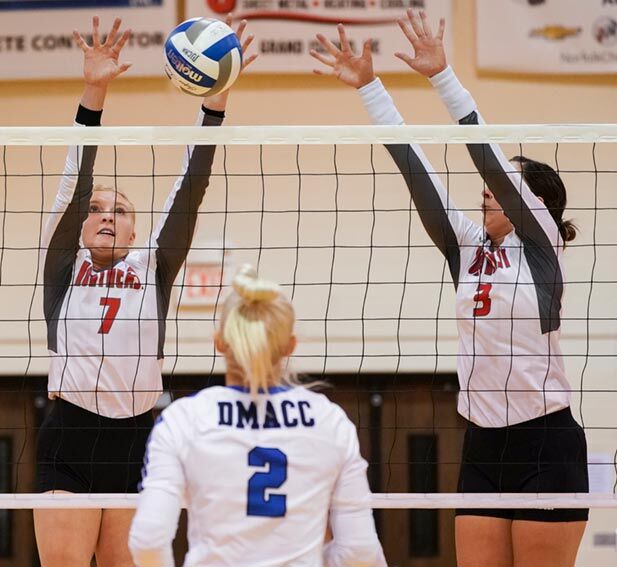 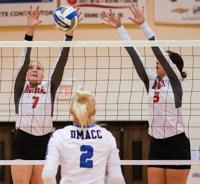 The Northeast Community College volleyball team appears to have saved its best for last.

The win is Northeast’s fifth in its past seven matches of the regular season, which coach Amanda Schultze hopes will propel her squad into the postseason. The Hawks, as the No. 6 seed, will travel to Waterloo, Iowa, on Saturday to face third-seeded Kirkwood Community College in a 3 p.m. Region XI B first-round contest to be played at Hawkeye Community College.

“Our sophomores have all been really good leaders; we only play a couple of them, and the others get in now and then,” Schultze said. “All the ones that are on the bench are great leaders by example, with great attitudes, cheering for their team, and they come to practice and work hard. They’ve been awesome.”

The Hawks’ recent uptick in performance has helped the team improve its season record to 10-21.

“I think we’re more relaxed, like they know the end of the year is coming, and they just went after it and are playing together a little more,” Schultze said. “I feel like we’re meshing and, with so many freshmen, are finding their identity (as a team).”

To defeat the Bears, Northeast had to overcome a pair of power hitters from the left side in Kylie Welch and Anna Niehaus, along with a left-handed right side hitter in Abby Allmon.

“Welch is their ‘go-to,’ so we really tried to take her out when she was serve-receiving in the front row, but (Welch and Niehaus) both hit crosscourt a lot from the left — hitting the seam in our block or the inside of our block,” Schultze said. “Allmon started out strong and, against a lefty, you’ve got to set your block up a different way, and you forget sometimes.”

Northeast took a 6-1 lead at the beginning of the first set on the strength of kills by Brooke Bannister and Lauren Kavan, which sandwiched an ace serve by Edyn Sudbeck, and another kill by Kavan on a Des Moines overpass.

The Bears’ offense began to find its pace; however, and five kills, two ace serves and a block produced a tie at 16 — the first of 10 tie scores before Northeast secured the 28-26 win on middle hitter Emily Rasmussen’s only kill of the set.

Des Moines responded with a power-packed start to the second set, flooring seven kills and an ace serve to grab an 8-5 advantage that the Bears increased to 23-14 with another series of five kills and three blocks.

The Hawks got no closer than four points the rest of the set before Des Moines finished the 25-19 win.

The third set was competitive early on, with seven tie scores and four exchanges of the lead until, trailing 19-13, Northeast got a boost from a lull in the Bears’ aggressiveness.

With the help of five Des Moines errors, along with a kill by Bannister and two by Rachel Ecklund, the Hawks cut the deficit to 23-21 and 24-22 before the Bears got to set point on kills by Niehaus and setter Sara Hansen.

Northeast hammered a dozen kills and added three blocks along with two ace serves while never trailing in the must-win fourth set. Des Moines totaled eight kills but countered with six blocks to stay within six points during the set until Rasmussen floored an overpass and Ecklund provided the 25-20 set-winner on an assist by Kapales.

Dealing with the Bears’ block became increasingly more important as the match continued, and the Hawks’ answer was more hitting attempts from the middle from Rasmussen and Bannister, along with varied sets from Sudbeck.

“Our setter (Sudbeck) did a really good job of mixing it up, which, in transition, gets our middles going,” Schultze said. “When they’re moving around, we’re moving around and we want to go fast to get kills.”

But the fifth set was Northeast’s best. The Hawks accumulated seven kills, including five from Kavan, to just three from Des Moines.

“I constantly tell Lauren to just hit the ball and stay aggressive,” Schultze said. “She finally did in that last set, and thank goodness she did because that really helped us.”

“We played really well,” Schultze said. “And we had two key ace serves (by Sudbeck and Bannister).”

Ecklund finished the night with 14 kills to lead a balanced offensive effort from the Hawks, with Kavan totaling 12, Danielle Wadsworth 10, Rasmussen 8 and Bannister 7.

Five different Hawks contributed  to Northeast’s 10 ace serves in the match, led by Sudbeck and Bannister — with three each. Christensen provided two, along with aces by Kavan and Wadsworth.

Leading the way on defense against the Bears was Christensen with 37 digs, with plenty of help from Kavan’s 22 and Kapales 20, but Sudbeck and Wadsworth contributed 14 and 12, respectively. Kavan added five blocks, followed by Bannister (four) and Rasmussen (three).

Man gets jail time for threatening to kill mother

MADISON — A Norfolk man was sentenced to jail on Monday after he was convicted of terroristic threats earlier this fall.

Norfolk Catholic no match for Bergan in C2 title game

LINCOLN — A hot start on its first drive wasn't enough for Norfolk Catholic as it fell to the Fremont Archbishop Bergan Knights 49-20 on Monday in Memorial Stadium.

Man accused of delivering 3 pounds of meth in Norfolk

A Fremont man could face life in prison following an alleged drug deal on Oct. 29 that involved the delivery of about 3 pounds of meth.

LINCOLN — An interception. A fumble returned for a touchdown. Five penalties that cost them 34 yards.

Inmate refuses to sit before judge, sits mute during hearing

MADISON — An Omaha man managed to cause a scene in district court Monday afternoon without saying a word.

Hunting while pregnant: It’s not for everyone

Some might call me a glutton for punishment for braving the chilly weather last week in an attempt to hang my first set of antlers on the wall.

"Another tribute wall for one of our friends. Giving thanks that once again it was a white turkey!"