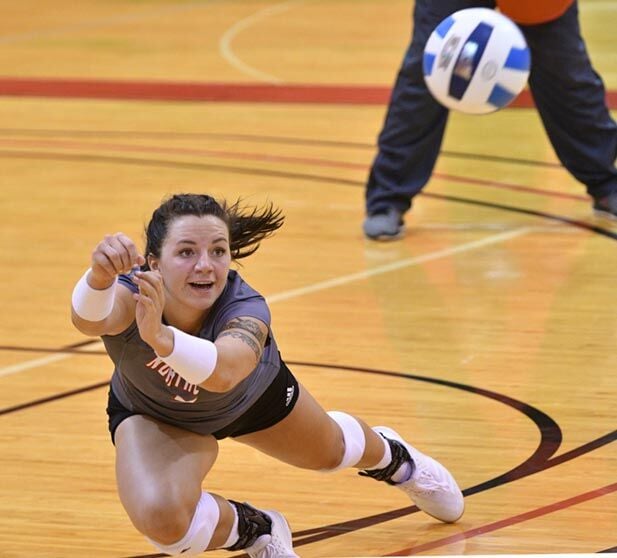 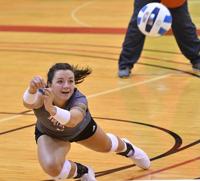 Payton Weber of Northeast dives for the ball during Tuesday night's match against Iowa Lakes Community College in Norfolk. 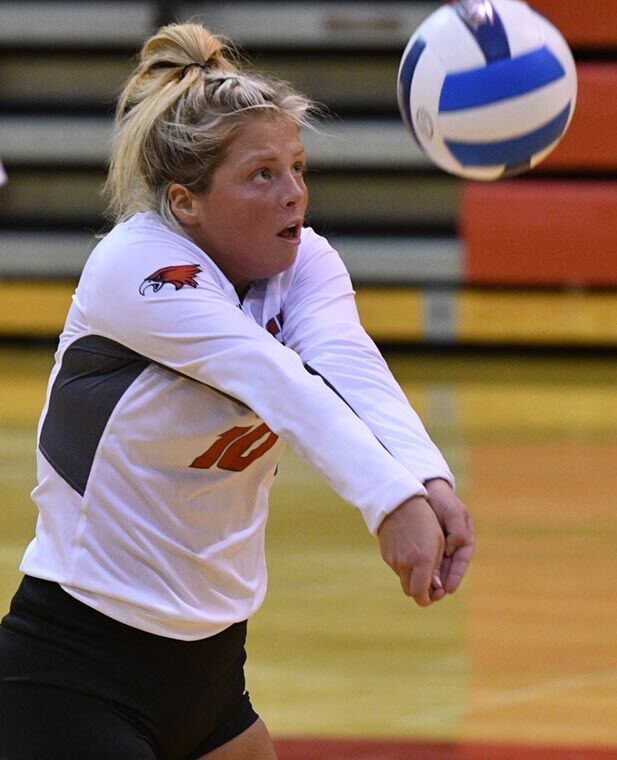 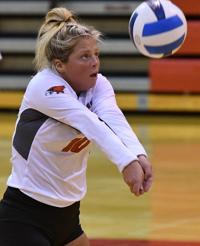 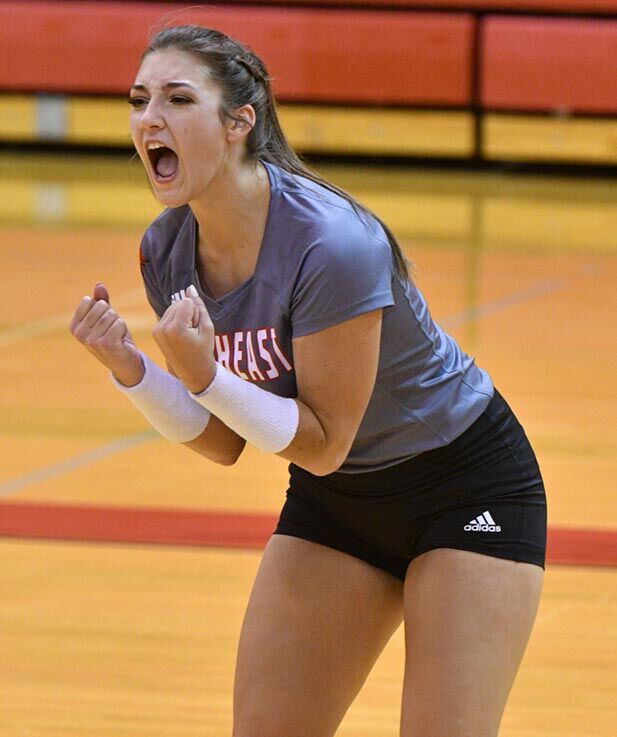 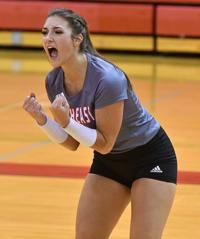 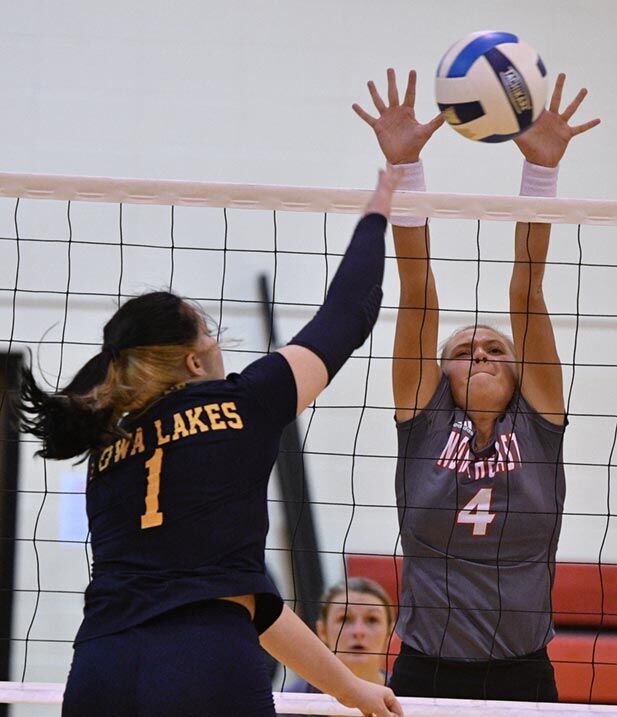 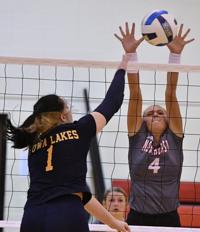 Kinsey Skillstad of Northeast reaches to block a spike by Jacklyn Dean of Iowa Lakes Community College during Tuesday night's match in Norfolk.

Payton Weber of Northeast dives for the ball during Tuesday night's match against Iowa Lakes Community College in Norfolk.

Kinsey Skillstad of Northeast reaches to block a spike by Jacklyn Dean of Iowa Lakes Community College during Tuesday night's match in Norfolk.

The Hawks swept past visiting Iowa Lakes Community College of Estherville, Iowa, 3-0 — winning 25-18, 25-18 and 25-21 — in what the team hopes is its first step toward a fifth straight return to the NJCAA DII National Volleyball Tournament.

For that to happen, according to coach Amanda Schultze, the team will need to follow the leadership of its trio of returning sophomores — Elizabeth Christensen of Stanton, Carly Hirsch of Norfolk and Jamie Bonifas of Blue Hill.

“We have some sophomores that have had good playing experience and are able to provide leadership in more than one area,” Schultze said. “Jamie played half the season as our setter last year, Carly was a starting middle-hitter, and Liz was a defensive specialist who is playing all the way around the rotation this year.”

The team also added another sophomore in the offseason, Alexis Kapales, from Jonesboro, Arkansas.

“We got Alexis as a sophomore transfer from Labette Community College in Parsons, Kansas,” Schultze said. “She’s our libero — she’s not quiet, she talks the game the entire time — so that helps us out back there. She’s very vocal, which is great, because most of the freshmen are very quiet.”

The combination of returning sophomores and first-year players jelled as the Hawks pulled away from a 4-4 tie to lead 19-10 and weathered a brief comeback rally by Iowa Lakes that brought the Lakers back to within 20-16 before closing out the 25-18 first-set win.

Northeast’s offense featured a balanced hitting attack led by freshmen Makayla Forsberg and Payton Weber, who finished with three kills each. But the Hawks also got contributions from Christensen and Hirsch, who added two kills apiece, and a pair of ace serves by Hayley Hughes, along with one from Hirsch and another from Weber.

Weber then paced Northeast offensively with five kills in the second set, propelling the Hawks to another 25-18 victory.

Northeast didn’t commit an attack error until the lead increased to 18-10 on a Hirsch kill of a Lakers overpass, and Iowa Lakes could get no closer than 24-18 on the Hawks’ third and final hitting error.

Hirsch — who also recorded an ace serve in the second set — continued to provide offense for Northeast, accumulating eight kills and another ace in the third set, a 25-21 Hawks win.

After catching the Lakers at 10-10, Northeast trailed again until forging a tie at 19 and then finished out the set on Kapales’ ace, two kills and a block by Hirsch. On match point, at 24-21, Bonifas — who finished the night with 29 set assists — set Hirsch in the middle for the game-winner.

For the most part against Iowa Lakes, the Hawks avoided hitting errors — totaling just 10 in the three sets — although Schultze said the errors were made “when it mattered more often than when we were up by a lot,” which also the case with Northeast’s occasional service error.

“It was kind of what I expected for a first night,” Schultze said. “After tonight I see the little things that we need to work on, things that really stood out to me which haven’t in practice.”

HOWELLS — The No. 4 seededHowells-Dodge boys took an early 7-0 lead after a Lance Brester layup, and a layup and three-pointer by senior Jacob Tomcak. That run was enough to hold off an attempted comeback by No. 13 Mead, giving the Jaguars a 43-36 win and a trip to the state tournament.

Restrictions are lessening, problems are increasing

On a roller coaster, people are taken in circles, turned upside down, and plummeted toward the ground; however, the ride eventually ends and everything goes back to normal.

It has been a full year since COVID-19 has entered the United States. Since then, everyone’s lives have changed forever. COVID death numbers have risen, fallen, and then risen again. Now, numbers are falling again, and it seems that we may have been able to flatten the curve.

Nebraskans have done a good job being precautious

According to the New York Times, Nebraska has seen a 14% decrease in new COVID cases over the past two weeks in comparison to the weeks prior. Nebraska is among the best states at keeping cases to a minimum.

The construction industry in Northeast Nebraska showed little evidence that the COVID-19 pandemic led to tighter household budgets in 2020.