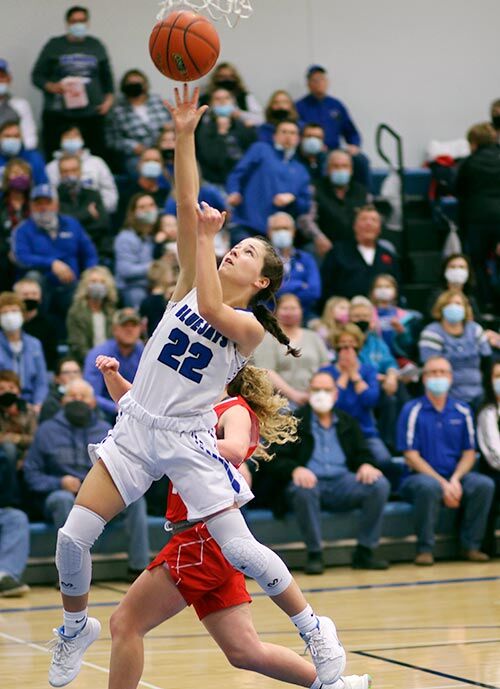 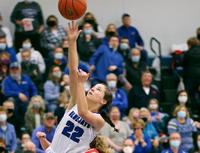 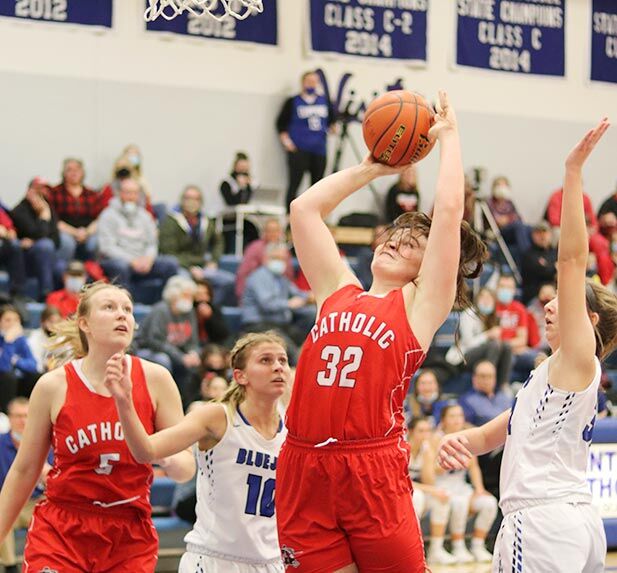 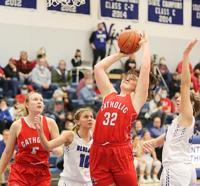 WEST POINT — After a two-year absence, Guardian Angels Central Catholic is returning to the state tournament. The Bluejays held off a scrappy Norfolk Catholic team with a 53-42 win in the C2-3 district final on Friday.

GACC has not played in Lincoln since 2018, when the team's current seniors were freshmen. But they'll go into the state quarterfinals, which begin Wednesday, without one of those seniors.

Leading scorer Brenna Rief, who averaged nearly 16 points per game, suffered a season-ending knee injury during last week's subdistrict and will have to contribute by cheering on her teammates from the bench.

"It's a little hard at first, but sitting there, just seeing them play, they've grown so much, this team, and I just love watching them," Rief said.

Guardian Angels coach Jerry Stracke said Rief is more than a 1,000-point scorer. "She gets out in our transition. She's an all-around player and, defensively, she comes up with a lot of steals. She keeps the team together, so losing her was huge."

The Bluejays came out of the gate as they always do, playing their full-court pressure defense and forcing the Knights into nine first-quarter turnovers.

Nevertheless, Norfolk Catholic center Mary Fennessy scored on a short jumper on an inbounds play to put the Knights on top 7-6 midway through the first.

But Central Catholic's depth turned turnovers into baskets on the other end. Isabel Hass' 3 with 35 seconds left in the quarter had the home team up 16-9.

The Bluejays led by 10 early in the second quarter. Brandi Doernemann's layup made it 21-11. But Norfolk Catholic scored the next nine points. Carly Marshall's baseline jumper with 3:37 left pulled Norfolk Catholic to within one.

Unfortunately for the Knights, those were the last points they'd score in the first half. Guardian Angels finished it with a 7-0 run to lead 28-20 at the break.

"They finished quarters better than we did," Kassmeier said. In fact, the Bluejays outscored the Knights 25-8 in the final three minutes of the four quarters combined.

"Give them a lot of credit," he said. "They were able to make some runs. I thought we tried to answer it each time. We played hard, but when you play a team like that, you just can't make as many mistakes as we did, especially late."

Norfolk Catholic came out on fire to start the second half. Kalea Fischer, Elly Piper and Fennessy combined for eight points in a span of 40 seconds to tie the game at 28.

"I have to give credit to Norfolk Catholic," Stracke said. "They played well. They played great defense and were tough on the boards. They battled through the whole game."

The two sides traded baskets for the next three minutes. Fennessy banked home a jumper from the left of the lane to trim the GACC lead to 37-34 with 3:10 left in the period.

But just as in the first and second quarters, the Bluejays owned the advantage late in the third, outscoring Norfolk Catholic 8-4 the rest of the way to take a 45-38 lead into the final eight minutes.

A pair of Knight turnovers early in the fourth quarter sealed their fate. Livia Hunke converted a steal into a layup with exactly six minutes to play and scored on another transition hoop seconds later to put the Bluejays on top 49-38.

In the final minutes, Guardian Angels went into its delay game, forcing Norfolk Catholic to foul.

"Guardian Angels got patient there late, and we had to get out of our comfort zone from what the game plan was and what we wanted to get done," Kassmeier said.

The Bluejays weren't able to put the game on ice right away because of poor free-throw shooting. GACC went just 2 for 11 from the stripe in the final two minutes.

Unfortunately, for the Knights, they couldn't convert on the other end, missing multiple shots, including several layups, losing possession and being forced to foul again.

"I thought we had some opportunities. We had some 2-foot shots that didn't go in. If we wanted to beat them, I told them we had to be good from 2 feet and we had to be really good from the free throw line," Kassmeier said.

GACC outscored Norfolk Catholic 8-4 in the final quarter and secured its ticket to Lincoln.

Hunke led the Bluejays with 11 points while Kaup added nine, and Isabel Hass and Brandi Doernemann, eight each.

Guardian Angels improved to 23-3 on the year. The Bluejays' only losses have come at the hands of Class C No. 2 Crofton (twice) and No. 1 North Bend Central.

The Bluejays will open their state tournament run on Wednesday at Lincoln Southeast High School. "I'm glad this group of girls gets a chance to experience it. It's a great experience to be able to make it down there, and I'm very happy about what they accomplished," Stracke said.

Fischer paced the Knights and led all scorers with 12. Teammate Elly Piper had 11 and Fennessy 10.

Norfolk Catholic will say goodbye to five seniors, including three-year starters Fennessy — who missed her junior year with a knee injury — and Marshall.

"It's not the sports that make it for me," Marshall said. "It's the people I'm with, and I'm going to miss them a lot."

Kassmeier also had praise for the other three seniors on the team. "They put their hearts on the line every night," he said. "Anna Neuhalfen, Emily Faltys and Taylor Kautz were just great role models for our younger kids. It's just a real good group of leaders."