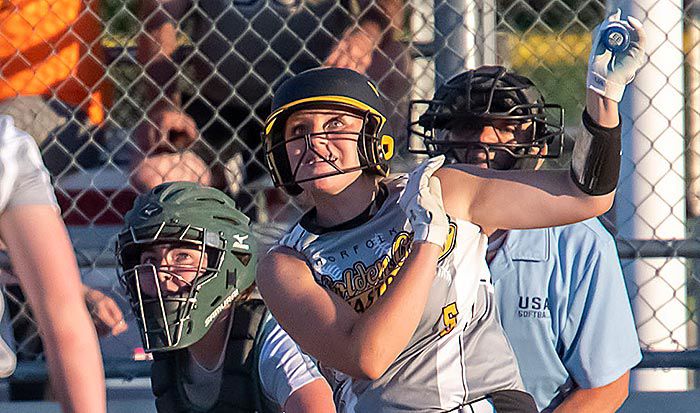 Golden Girls' Brianna Nissen (5) watches as her hit goes over the fence for a home run against Kelly's in the first inning of the second game Wednesday, June 24, 2020. 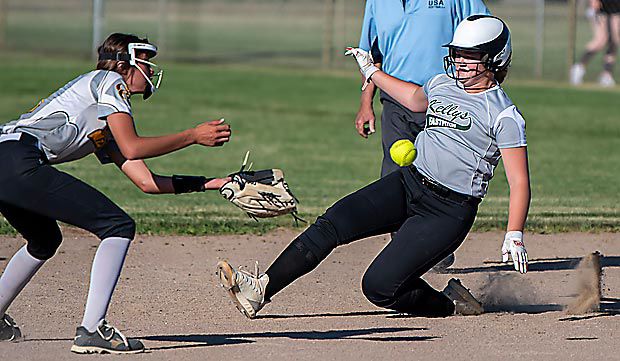 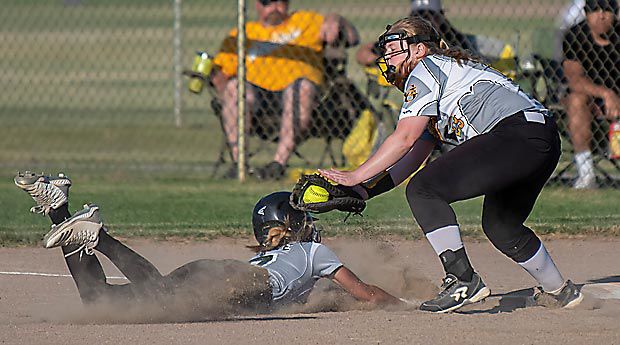 Kelly's Haley Bovee tries to get back to first after a pop fly as Golden Girls Erica Brown makes the out in the first game Wednesday, June 24, 2020. 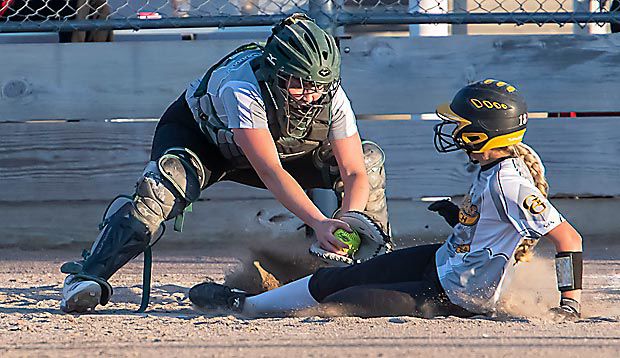 Golden Girls' Rylee Renner (18) slides under the tag from Kelly's Madisyn Cunningham (00) score in the first inning of the second game Wednesday, June 24, 2020. 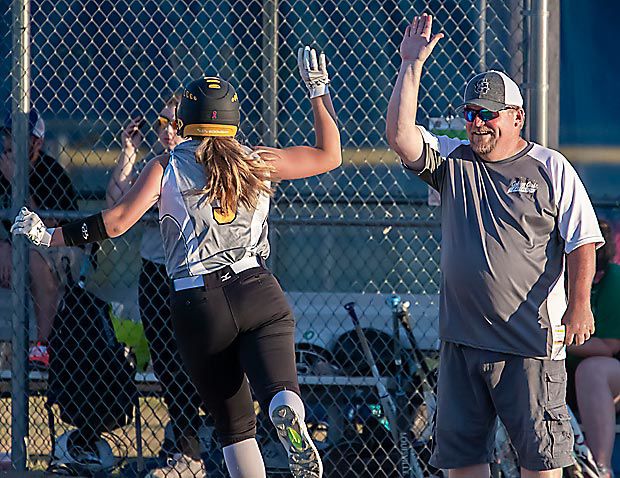 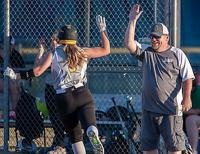 Golden Girls' coach gives five to Brianna Nissen (5) after hitting an out-of-the-park home run against Kelly's in the first inning of the second game Wednesday, June 24, 2020.

Golden Girls' Brianna Nissen (5) watches as her hit goes over the fence for a home run against Kelly's in the first inning of the second game Wednesday, June 24, 2020.

Kelly's Haley Bovee tries to get back to first after a pop fly as Golden Girls Erica Brown makes the out in the first game Wednesday, June 24, 2020.

Golden Girls' Rylee Renner (18) slides under the tag from Kelly's Madisyn Cunningham (00) score in the first inning of the second game Wednesday, June 24, 2020.

Golden Girls' coach gives five to Brianna Nissen (5) after hitting an out-of-the-park home run against Kelly's in the first inning of the second game Wednesday, June 24, 2020.

It was a clash between two Norfolk softball teams Wednesday night at Ta-Ha-Zouka Park as the Golden Girls 16U softball team downed Kelly's 18U 3-1 and 11-3.

The Golden Girls were able to play in Norfolk for the first time this season, as they put on a display in the Northeast Nebraska area again.

"We put in so much work in the wintertime. Most of these kids didn't touch a ball just shy of two months. It means everything for these kids to play here again," Golden Girls coach Shannon Brown said. "We have now been able to spend time getting the bats going, and we hit the ball hard tonight."

But both teams struggled to get their bats going in the first game of the doubleheader as the game was scoreless through the first three innings.

In the fourth inning, the Golden Girls scored both of their runs on two errors and they tacked on another run in the fifth on a wild pitch.

Kelly's battled back and broke the shutout on an error by Golden Girls shortstop Tara Koch.

"This team never quits. They can be down 10-0 and it's not over," Kelly's coach Angela Yorba said. "They will continuously fight."

But the Golden Girls, behind pitcher Rylee Renner, hunkered down and were able to get a flyout to right field to end the game.

In the circle, Renner kept the Kelly's hitters off balance as she struck out seven hitters and allowed only four hits in five innings of work.

"Rylee has a lot of spin on the ball. She's never going to overpower you, but she's going to keep you guessing the whole time," Brown said. "She's a wonderful leadoff pitcher."

On the other side, Tristen Buss had one strikeout and allowed five hits for Kelly's while Erica Bacon hit two doubles at the plate.

In game two, the bats came alive for the Golden Girls as they jumped out to an early lead and coasted after a huge first inning.

"We just got going. We just took the wind out of their sail," Brown said.

In the first inning, after already grabbing a 5-0 lead, the Golden Girls had a base runner on second base before Brianna Nissen blasted a home run over the center field fence to extend the lead to 7-0.

"She has been working so hard, but she has struggled up until recently. So it proves to you that if kids work hard at hitting, day in and day out, it can happen," Brown said.

Six different Golden Girls hitters were able to reach base via a base hit while Virginia Kniesche and Renner each had a double.

Koch got the win for the Golden Girls as she pitched two innings and had two strikeouts. Erica Brown came in for relief and had one strikeout in two innings of work.

On the other side, Kelly's was able to get a few runs across the board on four hits but they wasn't able to stay consistent at the plate and play a clean game on defense.

"Mental toughness just wasn't on our side," Yorba said. "We had a few standout moments but, for the most part, we were cold."

Mia Eickhoff had a triple, Madisyn Cunningham hit a double while Buss and Mattie Young each had singles for Kelly's.

The Golden Girls will travel to Watertown, South Dakota, for a tournament starting Saturday while Kelly's also will take the field again Saturday in a tournament in Grand Island.

"We're still working on things defensively, but we are in a good place right now," Brown said.