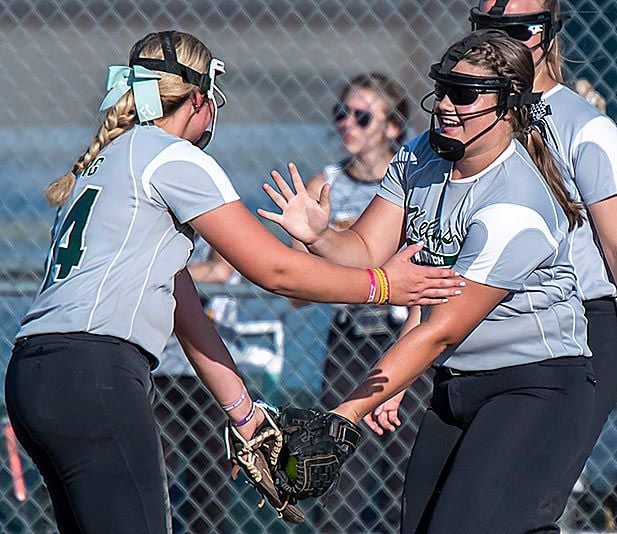 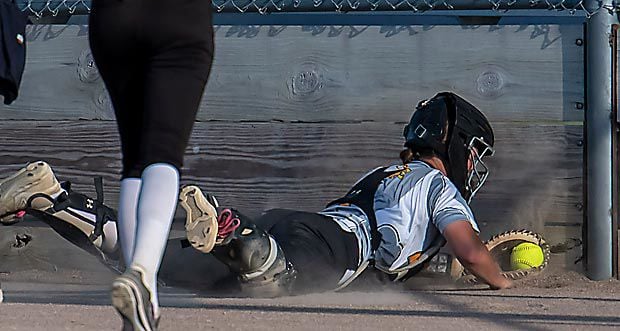 Golden Girls 16U catcher Ryllee Hoppe catches a fly ball at the backstop against Kelly's 18U, Wednesday, July 8, 2020. 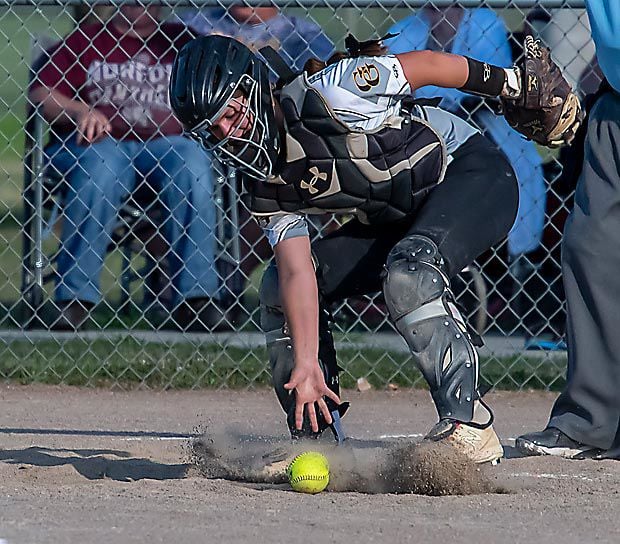 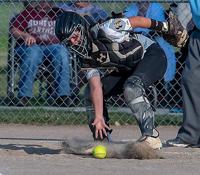 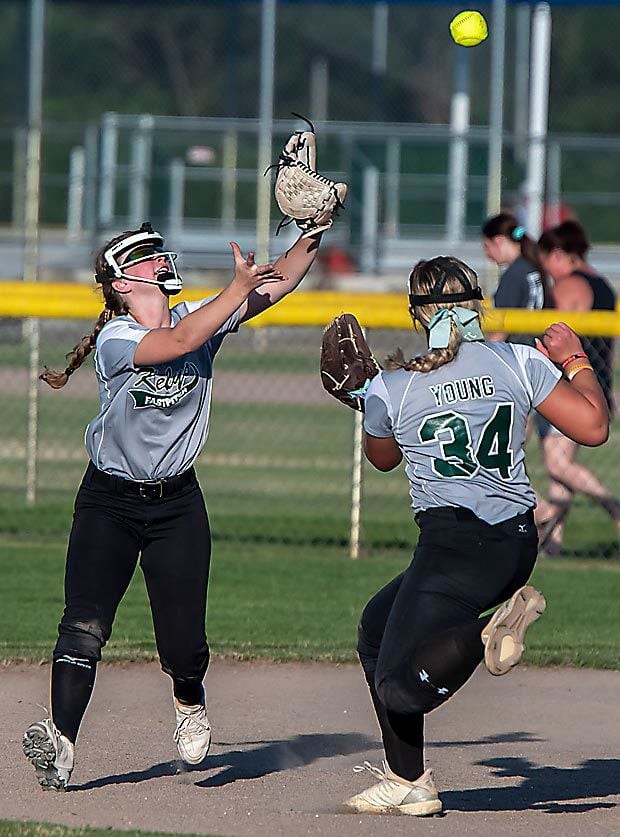 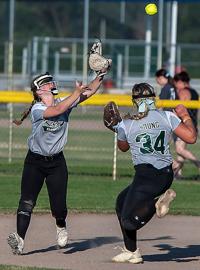 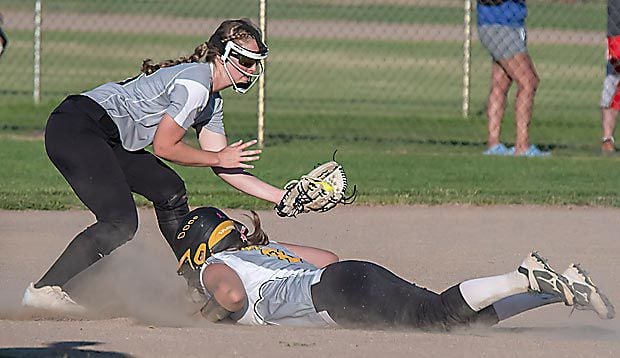 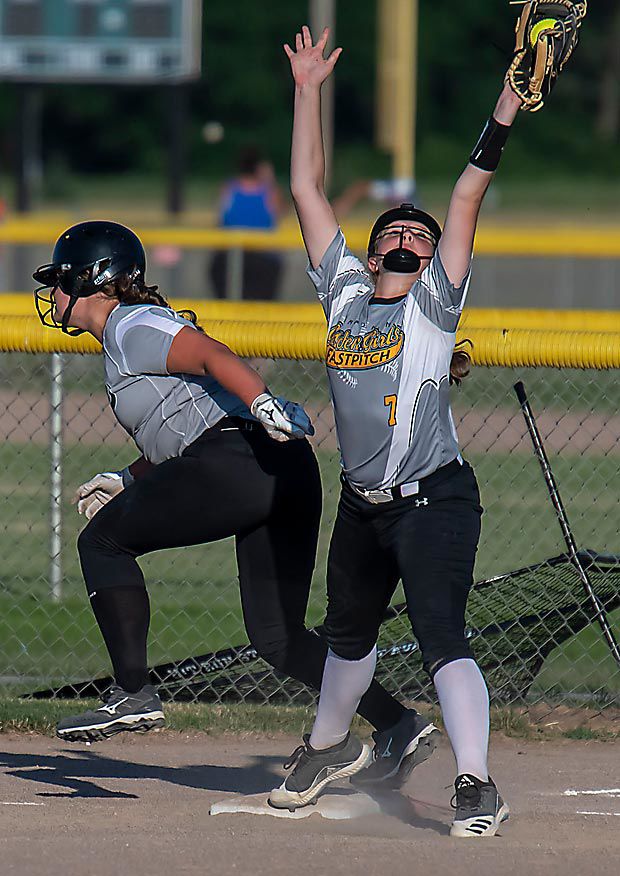 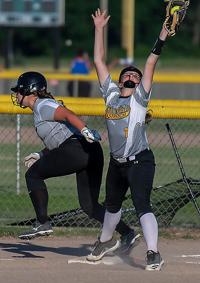 Golden Girls 16U first baseman makes the grab in time to get the out against Kelly's 18U, Wednesday, July 8, 2020. 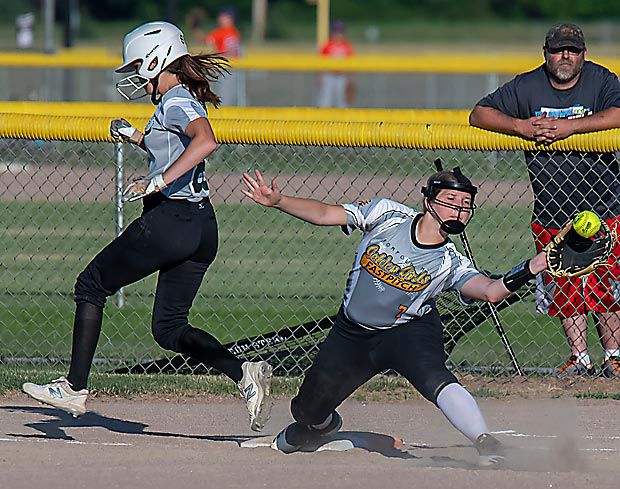 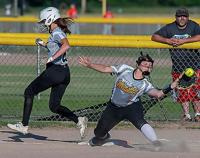 Golden Girls 16U first baseman Hailey Bobeldyke reaches for the ball as Kelly's 18U Eickhoff makes it to first, Wednesday, July 8, 2020. 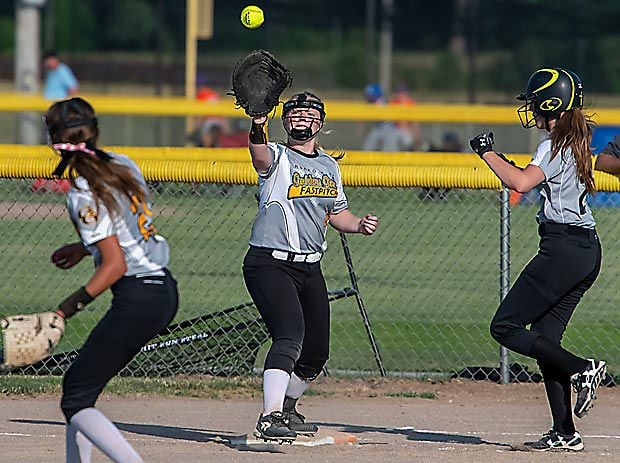 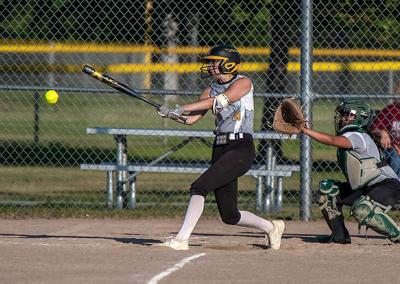 Golden Girls 16U catcher Ryllee Hoppe catches a fly ball at the backstop against Kelly's 18U, Wednesday, July 8, 2020.

Golden Girls 16U first baseman makes the grab in time to get the out against Kelly's 18U, Wednesday, July 8, 2020.

Golden Girls 16U first baseman Hailey Bobeldyke reaches for the ball as Kelly's 18U Eickhoff makes it to first, Wednesday, July 8, 2020.

The Golden Girls downed Kelly’s 3-1 and 11-3 in the previous meeting on June 24, but Kelly’s put up a fight against the Golden Girls on Wednesday night.

“In the first game they came in all ready to go,” Kelly’s coach Angela Yorba said.

Kelly’s opened the first game with a 1-0 lead in the first inning after Amber Thelen reached base on an error, which scored Erica Brown.

One run was just enough as Grace Day was at the top of her game in the circle for Kelly’s.

“Grace Day is a phenomenal pitcher. She’s the workhorse of our team and, once she gets in her zone, very little frazzles her,” Yorba said. “If she’s cool, calm and collective on the mound, then the rest of the team follows her lead.”

Day’s counterpart, Rylee Renner, also was dealing a solid game as she struck out five hitters and gave up four hits in 5½ innings.

The Golden Girls couldn’t get into rhythm against Day, with just two girls reaching base via a base hit. Erica Brown singled up the middle, and Ryllee Hoppe doubled down the left-field line.

“We had about seven or eight popups, and then when we had a couple solid hits into the outfield; they were catchable balls,” Golden Girls coach Shannon Brown said. “We just had to start hitting the gaps and hitting the ball hard.”

In the top of the last inning, Kelly’s was able to score a much-needed insurance run to extend the lead to 2-0 on a single to right field by Sierra Schroeder.

The Golden Girls went on to start the bottom of the sixth inning reaching base on three straight Kelly’s errors and cut the lead down to one.

But Day wasn’t about to let the Golden Girls come back as she struck out Cassie Ziemba to end the game.

In game two, it was the Tara Koch show as she was able to replicate Day’s pitching performance in the first game, but for the Golden Girls.

Koch allowed zero hits in five innings of work while she struck out eight hitters and gave up one walk.

The Golden Girls bats woke up as they had nine hits coming from seven different girls.

“The girls got after it in the second game,” Brown said. “But Kelly’s played well tonight and we enjoyed playing them.”

The Golden Girls were able to get two runs on the board in the fourth inning on an RBI single by Brown, who then later scored on an error hit by Brianna Niessen.

They scored one more run in the next inning on a line drive base hit to left field by Hoppe, to make it 3-0.

Tristen Buss was able to go 3 2/3 innings for Kelly’s as she had one strikeout and allowed one earned run.

The Golden Girls will practice on Thursday before they travel to Beatrice for the start of the USSSA State Tournament on Friday.

Kelly’s played in its final game in Norfolk on Wednesday this season but will end the year with a tournament in Broken Bow this weekend.

“I am extremely blessed to be able to coach this group. Our record may not indicate it, but I’ve learned so much from this team because of their dedication. They just don’t quit,” Yorba said. “We are building something here. This season alone from start to finish has been a miraculous change.”