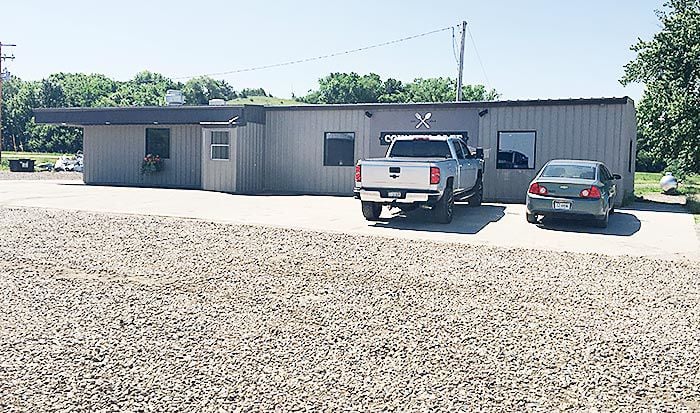 THE COUNTRY CAFE in Niobrara, which was demolished in last year’s flood, was repaired and open for business by June. Several other businesses affected by the flood are also open, while a few remain closed. 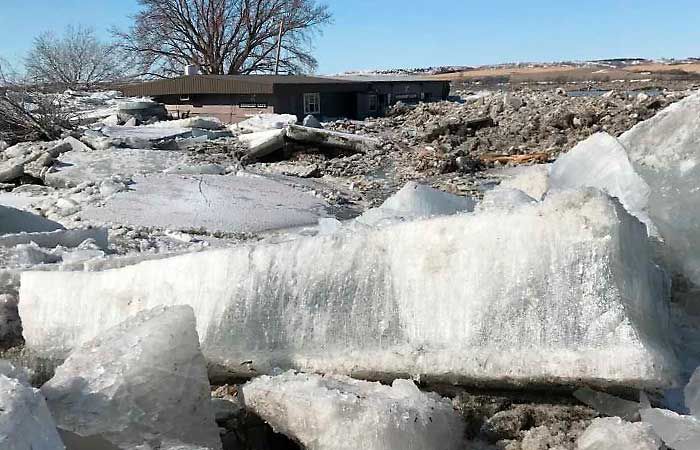 THE BUILDING that housed the Country Café in Niobrara looked like it was stuck in the middle of a broken-up glacier which was demolished in last year’s historic flood.

THE COUNTRY CAFE in Niobrara, which was demolished in last year’s flood, was repaired and open for business by June. Several other businesses affected by the flood are also open, while a few remain closed.

THE BUILDING that housed the Country Café in Niobrara looked like it was stuck in the middle of a broken-up glacier which was demolished in last year’s historic flood.

This is the first in a weeklong series of stories looking at the historic flooding that hit the state last March and its aftermath.

Sucha owns and operates the Country Café on the south edge of Niobrara. Last spring, on March 14, a wall of water and ice chunks cruised down the Niobrara River when the Spencer Dam failed. A trail of destruction cascaded down the river, leaving farmers and a couple of Niobrara businesses trying to come up for air.

A 7 a.m. phone call notified three Niobrara business owners they would be wiped out when a wall of water 11 feet high crashed through the bottom on the south edge of Niobrara.

“Never could we have imagined what that meant,” Sucha said.

Sucha and her family were stuck at their family home when the Verdigris Creek surrounded the town of Verdigre with water. No one could get in or out. Although family and friends sent updates on the situation in Niobrara, it was the next day before Sucha could make the trek to her café. Heavy equipment was needed to clear the ice from the road, and Sucha and her family even climbed ice chunks to get to her business — or what was left of it.

“It was overwhelming,” Sucha said as she looks back on last spring.

But by June 7, Sucha was up and running, thanks to more donations and volunteers than she could count.

“We are very blessed; volunteers and donations came from near and far,” Sucha said.

Crews came from all over to help with the construction of the Country Café, staying for days at a time. The roof was intact and more than 75% of the walls remained standing even though ice chunks as big as a semi-tractor tried to push their way through the dining room. Most of the kitchen equipment and dining room tables and chairs were destroyed. The business had to start from the ground up.

Today, Sucha is appreciative of everyone who made it possible to bring her café back into operation, making it even better than before.

“The customers are so glad we are open and they show it,” Sucha said. And so is she.

“The people here in Niobrara are very resilient,” Jody Stark said. “They do what they need to do to keep things going.”

Stark, the mayor of Niobrara and a local businessman, looked around the community and sees a strong will to succeed. Niobrara is a popular spot for spring and fall hunting opportunities, as well as water recreation. Even though the loss of a boat dock and the flood damage to the bridge heading west to the Niobrara State Recreation Area affected the spring and summer water activities, last fall not much stopped hunters from returning and enjoying their favorite spots.

Other businesses affected in the bottom area included Vic’s Service and a grain elevator.

Vic’s Service moved up Highway 12 and purchased a business that fit its needs. An older owner of a gas station and convenience store was ready to retire, and the two businesses came to terms.

The grain elevator is up and running, and a former state road yard became a parking lot for the construction workers rebuilding the bridge across the Niobrara River. The roads department had moved to a new yard east of Niobrara a few years ago, and the few buildings that remained in the old yard were cleaned out by flood waters.

A cement plant did not reopen for business. Another large shed owned by the Ponca Tribe was unoccupied at the time and is still standing with moderate damage, but no plans have been made for it. The Nielson Hay Co. moved it business outside of town to a different property it owned.

Now it is business as usual.

“I pray every day, we never have to go through that again,” Sucha said. “But I know now I truly belong here.”

Coming Wednesday: A look at how Osmond and Verdigre have rebounded from last year’s flooding.

To say Lindsay Laflan’s parents influenced her career choice might be an understatement.

PIERCE — Sonia Ronspies has fond memories of hearing the bells on the ice cream truck from her days growing up in Norfolk.

Most Northeast Nebraska schools are starting to discuss what the fall will look like, but administrators don’t want to finalize plans too early.

Track preparation for Off Road becomes an art form

Every year racetracks around the country get ready strive to have their tracks as close to perfection as possible to allow drivers to be at the peak of their ability and have a chance to succeed.

Cyclists, runners, hikers and horseback riders wishing to use parts of the Cowboy Trail that have been closed since the March 2019 flooding will have to wait until at least 2021.

After missing out on the spring high school season, junior golfers from around the state competed in the Nebraska Junior Golf Tour season opener at the Norfolk Country Club on Monday.

Drivers of all ages come and go every year into the Off Road Speedway in Norfolk to test the waters to see how they can matchup with competition.