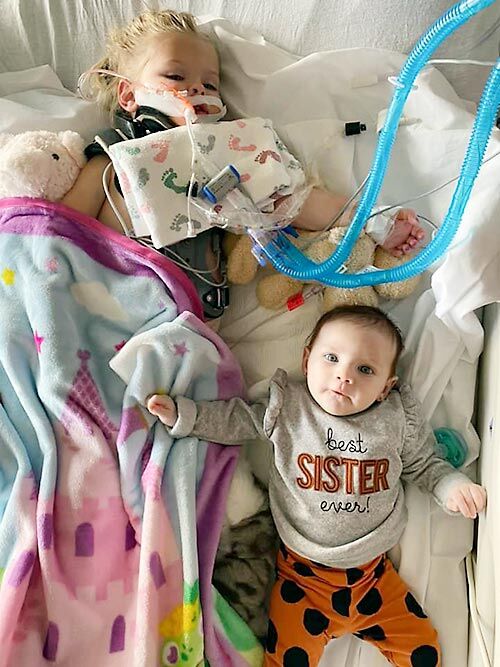 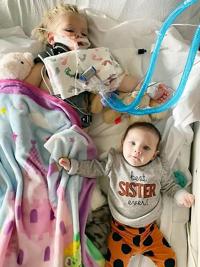 AUBREY MORGAN remains on a ventilator following a Nov. 9 car accident in Norfolk. She was visited by her siblings, including her sister, Avery (right), about a week after the accident. 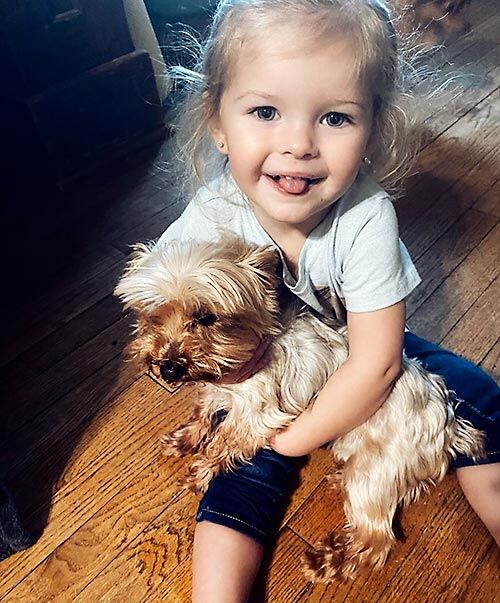 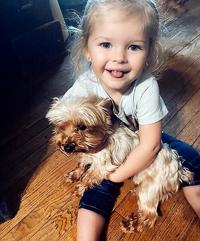 AUBREY HOLDS her dog, Daisy, at the family’s home in Wausa earlier this year.

AUBREY MORGAN remains on a ventilator following a Nov. 9 car accident in Norfolk. She was visited by her siblings, including her sister, Avery (right), about a week after the accident.

AUBREY HOLDS her dog, Daisy, at the family’s home in Wausa earlier this year.

Abbey Morgan said Nov. 9, a Tuesday, was a normal day.

Morgan, who lives in Wausa with her husband, Aaron, and three young children, makes weekly trips to Norfolk to visit her mother and run errands.

She was in the Norfolk area that Tuesday with each of her children: Aubrey, age 2; Liam, 1; and Avery, 3 months.

The Morgans had made a trip to Puppy Love in northwest Norfolk early that afternoon to get the family dog, Daisy, groomed. After the errand was finished, Morgan said she was planning to stop at a local eatery to buy Aubrey some chicken nuggets.

Morgan was headed eastbound on West Eisenhower Avenue near Highway 81 about 3:15 p.m. That’s when the family’s “normal” day became anything but.

The next thing Morgan remembers is turning her head and seeing Aubrey lying nearby, having CPR performed on her by paramedics.

“I turn toward the intersection, and it’s flooding with ambulances and police,” Morgan said. “It was an awful scene. If you saw what I saw that day …”

Morgan’s eastbound Ford Explorer had been struck by a northbound Dodge Ram pickup on Highway 81. The driver of the pickup had run a red light and crashed into the passenger side of the Morgan vehicle, sending both vehicles into a ditch northwest of the intersection.

“We were going across the intersection — when we crossed, there was no sound,” Morgan said. “Then all of a sudden, I’m staring at the scene.”

Morgan said she remembers being “knocked out” for a short amount of time before ripping off her seatbelt and noticing Aubrey. The mother of three had sustained a bulged cervical disc in her neck, a hematoma that swelled one of her eyes shut and cuts and burns around her head caused both by her head hitting the glass and airbag deployment.

Liam and Avery sustained minor injuries, Morgan said, as did Aubrey's dog. The pet carrier Daisy was inside of was crushed, and had Aubrey’s dog been outside the carrier, Morgan said she “wouldn’t be here.”

Aubrey was seated near the main point of impact and suffered the most serious injuries of the four occupants.

Before ambulances had arrived on scene, there was a passerby, whom Morgan learned was almost never driving in that area during that time of day. But that individual had rescheduled an appointment and happened to be near the scene of the accident when it happened. That passerby, whom Morgan called a “blessing,” had removed Aubrey from the vehicle and started performing CPR before emergency personnel arrived.

“She wouldn’t have been able to survive too long without oxygen,” Morgan said.

Aubrey was rushed to Faith Regional Health Services before being stabilized and transported by air ambulance to Nebraska Medicine in Omaha.

Morgan said doctors didn’t know the extent of Aubrey’s injuries until after her arrival in Omaha. They hoped she had suffered “just a horrible concussion.”

But Aubrey’s injuries were life-threatening. She was diagnosed with a C2 vertebrae fracture and a tear in her spinal cord covering. Injuries to the C1 and C2 vertebrae are rare and often fatal.

Doctors considered surgery to repair Aubrey’s fracture, but because her injuries were in close proximity to her brain, they decided not to do surgery, Morgan said.

“Operating on her as a 2-year-old, there are way too many risks because her skull is too thin for pins,” Morgan said, “meaning that if they did (surgery), then it’s possible they could drill straight through to her brain. The brace had no option but to work.”

Aubrey spent about 10 days at Nebraska Medicine before being transported to critical care support at Children’s Hospital & Medical Center on Nov. 19.

She coded and needed life-saving measures to be taken multiple at times while at Nebraska Medicine, Morgan said, and “has given us all the scares.”

But Aubrey’s condition has since improved since she was moved to Children’s Hospital, Morgan said, but each day carries its own set of challenges. Aubrey is often agitated and experiences delirium at 3 or 4 a.m. because of the different medicine she’s needed for her injuries.

“When you have to give her (medicine) in the middle of the night, she would get so confused and cry,” Morgan said. “That’s been a major adjustment.”

On Sunday, Aubrey was able to have her invasive breathing tube replaced with a “home” ventilator. Doctors told the Morgans that Aubrey needs to remain stable for two weeks on a home ventilator before she can be transferred to Madonna Rehabilitation Hospital. So the Morgans hope to leave Children’s Hospital sometime in late December or early January.

On Monday, an X-ray revealed that Aubrey’s neck was healing, showing that she continues to defy odds.

“It’s been over two weeks since she started moving her limbs when they said she wouldn't,” Morgan said on Monday. “Most kids can’t get words out over their (tracheal tube), but she has said, ‘Mom,’ ” Morgan said. “She continues to do everything they say she’s not going to. … I knew what she was capable of.”

Morgan said that when Aubrey isn’t being treated by doctors and nurses in the hospital, she spends much of her time watching horse shows and being on FaceTime with family on her tablet. She doesn’t think Aubrey knows what happened — only that she’s in a brace, lying flat and unable to move much.

It’s unknown how long Aubrey will have to stay at Madonna once she leaves Children’s, Morgan said, but her sojourn at the rehabilitation hospital will likely be at least a few weeks. Only time will indicate how fully Aubrey will be able to recover, but signs are pointing in a direction to her regaining full mobility, Morgan said.

One of the most difficult aspects of Aubrey’s recovery for the Morgans is not being able to see all of their kids together on a regular basis.

“We’re really missing out on our other two,” she said. “Liam is Aubrey’s shadow; when he’s not around, Aubrey’s shadow is gone. And Aubrey is like a mommy to her little sister (Avery). She doesn’t get that anymore, and she cries when she FaceTimes them.”

Morgan thanked her family, friends and strangers for the outpouring of support the family has gotten since the Nov. 9 accident. But the Morgans need continued thoughts, she said — more so than any gifts or monetary assistance.

“She has really been improving, slowly, but the nurses call her a miracle here,” she said. “There will be nurses who bring in their co-workers and say, ‘Look at this.’ They’re amazed by her progress. … We’re hoping for continued miracles.”

Aubrey received a package in the mail and opened it with her mother on Sunday. It was a nail polish container; painting her nails is one of Aubrey’s favorite hobbies.

“She said, ‘nail polish — pretty,’ over the ventilator, and she smiled huge,” Morgan said. “She continues to smile through it all.”

Aubrey’s road to recovery continues. She has a long path ahead alongside various doctors and nurses at multiple hospitals, but her family is optimistic that normal days lie ahead.

Aubrey knows that her favorite parts of life — her siblings, dog and nail polish — will be waiting for her at home.