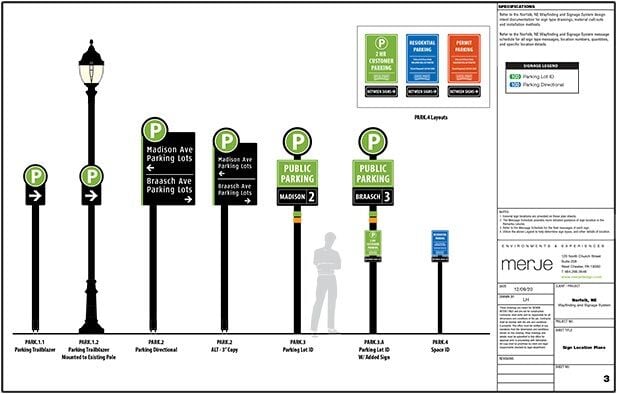 SHOW ABOVE are examples of parking signs that could be installed as part of the community wayfinding program. Amongst other things, this program will help identify parking lots downtown. 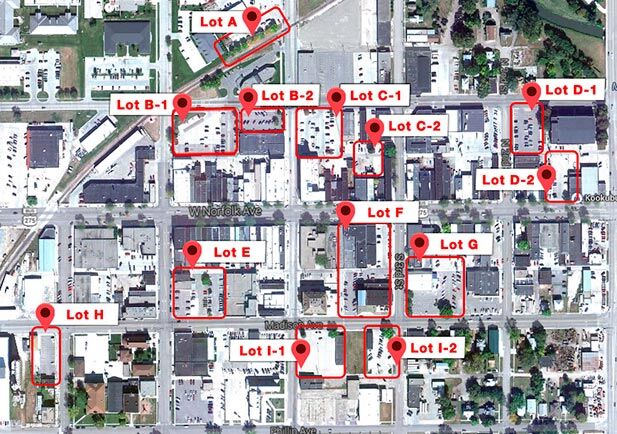 THE CURRENT Downtown Vehicle Parking District lots are show on the map above. There are 13 lots in the downtown area.

SHOW ABOVE are examples of parking signs that could be installed as part of the community wayfinding program. Amongst other things, this program will help identify parking lots downtown.

THE CURRENT Downtown Vehicle Parking District lots are show on the map above. There are 13 lots in the downtown area.

Instead, the problem is finding the parking that’s already there and changing perceptions on downtown parking, said Norfolk Mayor Josh Moenning.

“I think part of our challenge is not so much a space challenge, because when you look at an overview of Norfolk, there’s actually quite a bit of surface area parking,” he said. “I think it’s more a visibility and navigation challenge.”

There are more than 450 parking spaces spread out over 13 lots in the downtown area, according to the Downtown Vehicle Parking District’s plan. This is in addition to street parking in front of businesses.

Further analysis has shown that only two of those lots are more than 50% utilized at any given time, Moenning said.

“That tells me that there’s an education component here of making sure that people know where available parking exists, how they get to it, and that a vast majority of it is in fact open and free to the public,” he said.

District Table and Tap owner Andrew McCarthy, along with several other downtown business owners, agreed that education is the main problem.

“There’s tons of open parking,” he said of space near Second Street and Norfolk Avenue. “(The problem) is that people don’t know where to park.”

McCarthy said this is because the current signs don’t stick out, are hard to see and are not lit at night.

Magnolias has a parking lot on the backside of the store near Fourth Street and Norfolk Avenue, but customers are often confused by the signs and don’t know if they’re allowed to park there, said Amy Renter, the store’s owner.

Renter agreed with McCarthy that there’s plenty of parking space available in the downtown, as did Karen Arehart, owner of Franc’s Salon and Spa. Arehart’s business is also near Fourth Street and Norfolk Avenue.

Scott Adams, owner of the nearby Ravenwood Art Gallery, said he thinks there is a lack of parking space downtown, and that his customers often have trouble finding spots.

“I bought this store two years ago, and I couldn’t find a parking space on the first day,” Adams said. “Right now, street parking is filled up during the day, so it’s very much a problem.”

Adams agreed that the lack proper signs contributes to the problem, he said.

Moenning said the city’s new wayfinding program would help educate the public on where they can park downtown. A part of the program is adding new signs to highlight parking spots in the downtown.

Another major challenge around downtown parking is the public’s perception of what it should look like.

“In a small community, you expect to park just a step away from the door,” Renter said. “It’s just the perception of a small town.”

This perception may not be realistic anymore, Moenning said.

“Our idea of parking right in front of where we intend to go and walking 10 steps to the door is not realistic in a vibrant, active and attractive downtown,” he said. “When you have a growing and evolving downtown, a place where people want to be, that’s a good thing.”

Arehart said her customers rarely have problems finding parking, since there’s a lot behind the business. But even when spots aren’t available right next to the store, parking isn’t a big issue.

One concern downtown business owners do have is about the future. With downtown continuing to grow and develop, more drastic actions may be needed, Adams said.

“I’m concerned about the future,” he said. “At this point the biggest thing is to start discussions on a parking garage.”

Moenning said the challenges around downtown parking are less of a problem and more of a growing pain.

“When I talk to people about this, I first say, ‘Let’s recognize having the conversation in the first place is a good problem to have,’ ” Moenning said. “It’s a sign that people want to be in our downtown area. That wasn’t always the case.”

Crofton business celebrates 75 years of ‘just what the doctor ordered’

CROFTON — While on a New Year’s Eve outing in 1946, Dr. Joseph Wiebelhaus made a purchase here that set a new course for his family for generations.

In April 2018, Blair and Beth Rogers passed the sign bearing identical stripes to the ones on their event passes as they made their way to the Augusta National Golf Club’s clubhouse. As the daughter and wife of Bill Rogers, the 1981 PGA Tour Player of the Year, they had special access to pla…

KEARNEY — Campers from across Nebraska visited the University of Nebraska at Kearney over the week to take part in Digital Expressions media camp, an experiential learning program that introduces high schoolers to multimedia skills and careers.

WISNER — Having to orchestrate an entire health district’s response to a pandemic is something nobody wants to do, but it’s something for which local health department directors always have to be prepared.

The 1931 robbery of the Granada theater, and its aftermath, has all the elements of a great story. It’s full of cunning criminals and brave cops, crime and punishment and failure and success. At times it’s funny, and at others frightening to think about.

ALBION — Cows, horses and goats — along with pigs, sheep and chickens — are the typical animals you would see roaming the fairgrounds at county fairs.

Petting zoo at county fair ‘truly for all of the children’

MADISON — On the last day of the Madison County Fair & Rodeo, Noah's Way Exotic Petting Zoo was filled with children eager to interact with goats, llamas, ponies and more.