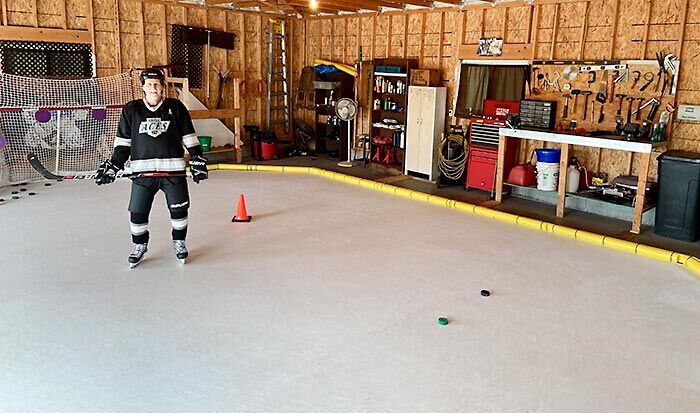 IN ORDER TO continue playing hockey in the hot Nebraska summers, Steve Geary has built an indoor arena in his garage. The rink is made of synthetic ice consisting of 4-foot by 4-foot, 40-pound panels. The rink is 28-foot by 24-foot. 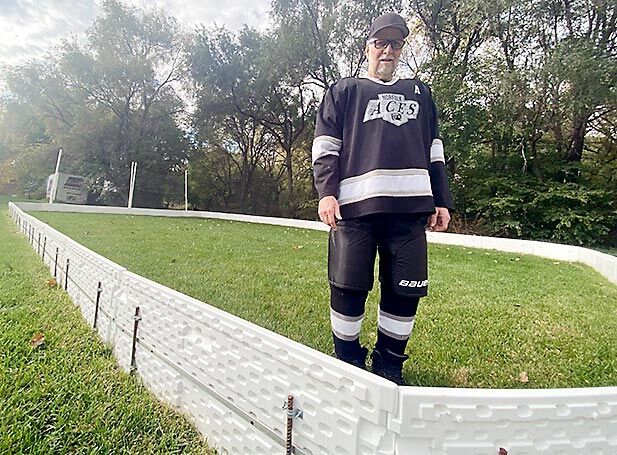 STEVE GEARY of Norfolk might be one of the few people in Norfolk who can’t wait for winter. He built a 60-foot by 35-foot ice rink from a kit he ordered from Wisconsin. It features 18-inch boards around the entire rink with a shooting backstop at one end. 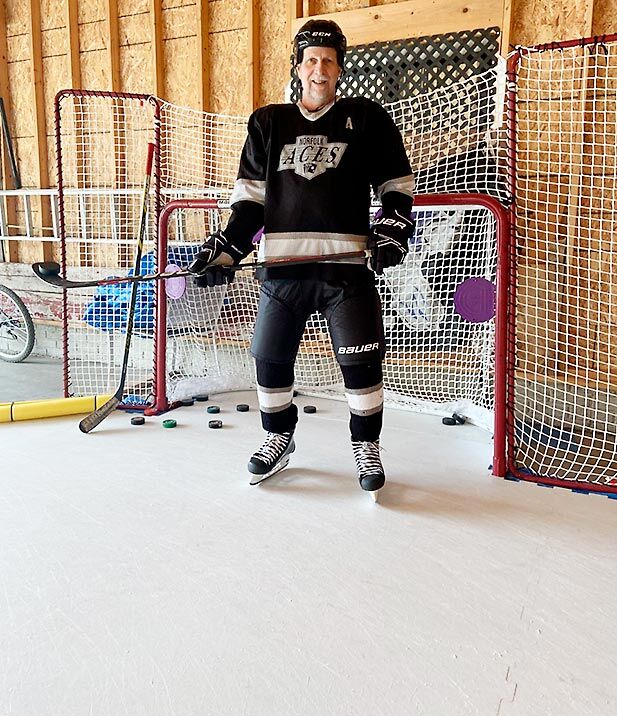 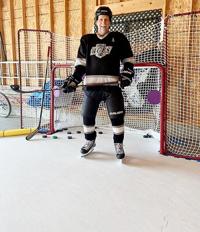 STILL ABLE to fit into his Norfolk hockey jersey, Steve Geary was an alternate captain on the Norfolk Aces, which competed in a men’s league in Sioux City, Iowa, in the 1980s.

IN ORDER TO continue playing hockey in the hot Nebraska summers, Steve Geary has built an indoor arena in his garage. The rink is made of synthetic ice consisting of 4-foot by 4-foot, 40-pound panels. The rink is 28-foot by 24-foot.

STEVE GEARY of Norfolk might be one of the few people in Norfolk who can’t wait for winter. He built a 60-foot by 35-foot ice rink from a kit he ordered from Wisconsin. It features 18-inch boards around the entire rink with a shooting backstop at one end.

STILL ABLE to fit into his Norfolk hockey jersey, Steve Geary was an alternate captain on the Norfolk Aces, which competed in a men’s league in Sioux City, Iowa, in the 1980s.

The 65-year-old Norfolk man is now playing hockey in his fifth decade, going back to when he started as a teenager in Norfolk in the 1970s.

He has built a small rink with a hockey goal and net in his double-car garage on the edge of Norfolk. The rink features synthetic ice, which allows him to work on skating, as well as his shooting and puck handling skills — even in the heat of a Nebraska summer.

Geary also has invested in an outdoor rink that he will fill with about 7,000 gallons of water when the ground is frozen and the weather gets cold. The rink is 60 feet by 35 feet and has a liner.

The liner will be held down by yellow bumper pieces until the ice gets thick enough for it to stay in place. Unless it is a mild winter, he should be able to play from early December until early spring.

Now Geary is hoping to turn others onto the game he grew up loving and playing in his hometown. That’s right, Norfolk was once a hockey town.

In the early 1970s and early ’80s, young people played on ponds around the area. Later came an outdoor rink, and there was a youth league for six years. Scores and sometimes highlights of games were given to the Daily News, which ran the results.

The youth league played hockey in an outdoor arena north of where The Meadows is located now. Geary and others helped to raise the funds to build it.

“It was just posts and like two-by-eights or something,” Geary said. “We nailed them up (on top of each other).”

At one time, people also skated at Skyview Lake so a lot of the boys got to know each other and found out who liked skating.

Geary said he first played hockey with his brother, Jeff. Sometimes his father would hose down the back patio and it would become ice.

“He was younger than me so he had to be the goalie,” Geary said with a laugh.

Geary, 65, said hockey gave him fond memories. Eventually the winters became more mild for the outdoor rink, so then many of the Norfolk young people who grew up playing together played in a league in Sioux City, Iowa. They were competitive and even finished first one year in the league.

“We finished 17-3-2,” he said. “I can still remember that. We went undefeated for almost four months.”

Each of the teams, including Norfolk, also got two “pros,” which mostly were former Sioux City Musketeer players, including some who reached the NHL, like Walt Johnson. The Norfolk team included Jim Peck and Barry Head, both of whom were from Canada and played for the Musketeers.

“These guys were just phenomenal,” Geary said. “They would just take control of the game. They could burn you if they wanted to.”

Peck and Head were both considered A players. Geary was rated a B and teams also included some C and D players. There were four teams that played on Sunday mornings at the old Sioux City Auditorium.

“It was just a lot of guys who just loved playing hockey,” Geary said. “There would be these college guys and ex-pros. It was like a men’s old softball league.”

One of Geary’s goals now is to have Norfolk build an indoor ice skating arena, similar to what Fremont and Yankton, South Dakota, have done. He believes if youngsters grow up playing hockey, they would fall in love with it and continue playing.

“I want to spread the word about this great sport, which I feel is the best sport on earth. You can't run 20 mph like you can on skates, which makes the thrill of this sport all the more enticing.”

Short of that, he would like to see some type of outdoor rink get built so at least there would be times when Norfolk and people from the area could get ice time and learn the sport.

“It is something I would just like to do,” he said. “I want to get some of these young kids playing. In another 20 years, I might be dead. I think I need to get this thing going as it might be the last good thing I do for this earth.”

Geary is still fit and hopes to be playing hockey for another five years or so. He began thinking about getting an ice arena in Norfolk about 12 years ago when he was taking care of his mother, Bonnie Geary, who had Alzheimer’s disease. She died three years ago.

“That was tough,” he said. “That was really tough.”

For those who think a hockey rink in Norfolk is a dream, Geary said they should just look north to Yankton, which has 10,000 fewer people and has a rink and established program.

“They were doing bake sales for five years,” he said. “They call it Miracle Hockey. Now they got about 400 kids in the program. Fremont is the same thing.”

Anyone interested in getting information or wanting to get a rink built in Norfolk is asked to email norfolkrink68701@gmail.com and let Geary know.

Eventually they hope to bring ideas to the Norfolk City Council, he said.

Hearing to be held on alleged Snapchat video in murder case

MADISON — The murder case of a Norfolk man is nearing a trial date, but several motions filed by attorneys must be heard by a judge beforehand.