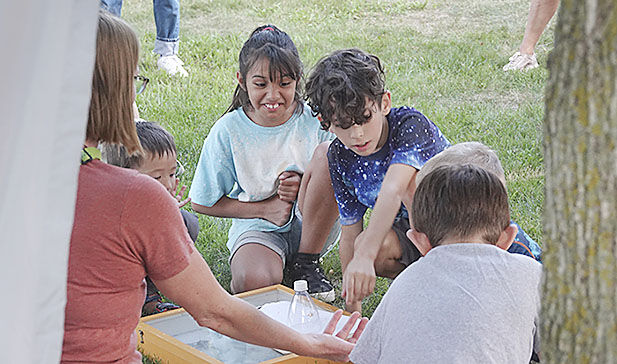 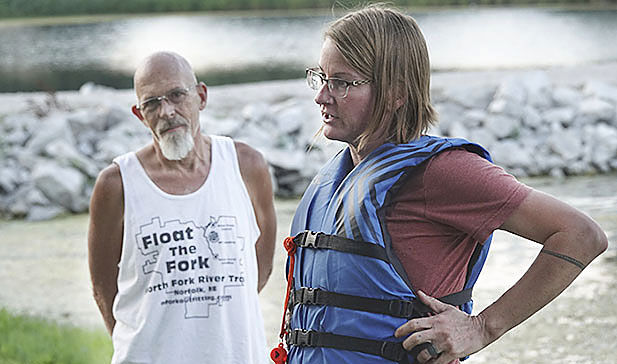 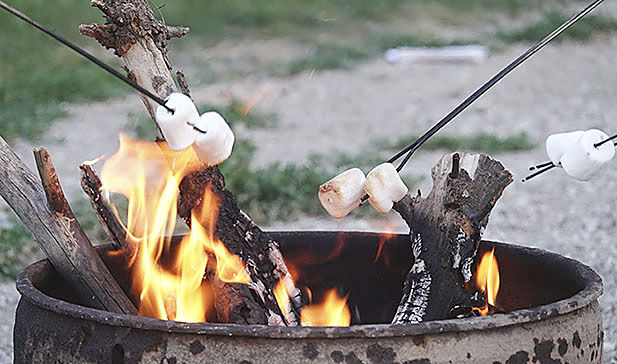 MARSHMALLOWS ROAST over a fire near Skyview Lake at Lower Elkhorn Natural Resources District's Stars, Strolls and Smores. Smores followed lectures on being active in the outdoors. 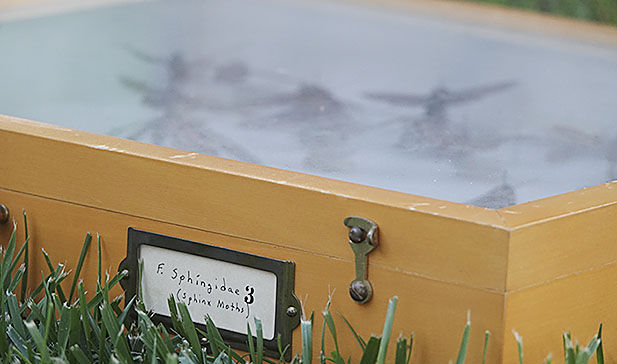 WAYNE STATE COLLEGE provided moths for Bachmann’s presentation. Despite removing mothballs from cases, the college’s collection still gives off traces of the carcinogenic poisons they contained.

MARSHMALLOWS ROAST over a fire near Skyview Lake at Lower Elkhorn Natural Resources District's Stars, Strolls and Smores. Smores followed lectures on being active in the outdoors.

WAYNE STATE COLLEGE provided moths for Bachmann’s presentation. Despite removing mothballs from cases, the college’s collection still gives off traces of the carcinogenic poisons they contained.

The Lower Elkhorn Natural Resources District hosted its second of three Stars, Strolls and S’mores events this week at Skyview Lake. The event featured guest speakers on the basics of kayaking and mothing.

Attendants gathered under a tree to listen to presenters explain safety and science along the lakeshore.

“I have a tendency to love any kind of outdoor nerd no matter what they’re doing,” said Jamie Bachmann, a wildlife education assistant with the Northern Prairies Land Trust. “Anyone that’s really interested in what they’re into is the best.”

Her appreciation for high energy was not lost on the audience. Bachmann assisted Tony Stuthman of North Fork Outfitting in explaining kayaking basics and safety practices.

Stuthman explained the ins and outs of kayaks and shared maneuvering techniques while encouraging people to prepare for the worst-case scenario and avoid — literally — getting in over their heads.

“You don’t necessarily think of a kayak like a boat, but both kayaks and tubes are included with all the regular boating laws,” Stuthman said. “So when you’re on an inner tube, even though you’re swimming more or less, you’re still required to wear a life jacket. Technically, you’re still supposed to have the bilge pump and a whistle.”

The same rules apply to aquatic vessels of all calibers, Stuthman explained. Whistles allow boaters who get moved into places where they might not be seen to alert someone who may be able to provide help. Bachmann advised staying away from ball whistles, as the wooden balls get wet and render the whistle unusable.

Stuthman explained that bilge pumps let boaters remove water from vessels if it starts to fill up the inside — a problem that sinks boats if left unchecked.

Bachmann said these safety measures don’t have to stop boaters from having fun. Pump-action water cannons for children’s play can remove water from a vessel in a similar vein to bilge pumps, but boaters may consider using these to supplement stronger, more reliable bilge pumps.

And, of course, life jackets are essential for any water activity.

“Folks that are tubing laugh at me when I tell them they have to have a life jacket,” Stuthman said. “They’re going to go down the river, drink their beer and party. But that’s when people die. That’s when you need your life jacket.”

“When you get a life jacket, it should be snug and comfortable,” Bachmann said, demonstrating the proper way to attach the clasps from the bottom up.

Bachmann had additional advice on what to look for in a kayak.

“Getting one that has a closed, dry compartment is important to keep all your stuff dry,” Bachmann said. “If you ever tip it, it will stay afloat.”

Bachmann and Stuthman also suggested using pool noodles to line the sharp plastic edges along the inside of a kayak to prevent cuts that could get infected in the water.

Beyond physical equipment, boaters should also come equipped with knowledge.

Weather hazards pose a significant threat to inexperienced boaters and can even catch water veterans off guard if they aren’t prepared.

“Our protocol is if you hear thunder or see lightning, get off the water and move away,” Bachmann said. “Lighting strikes happen right on the edge of the water.”

Boaters should wait 30 minutes after the last instance of lightning or thunder to get back into the water.

Early spring is prime time for kayaking with favorable water levels, but despite the heat in April and May, the water remains cold from the winter.

Following the kayaking presentation, Bachmann showed off a collection of moths borrowed from Wayne State College to the children in attendance. Bachmann emphasized the importance moths have as pollinators as well as the diversity of moth species that call Nebraska home.

Bachmann shared the role she plays as a community scientist. Community science, sometimes called crowd-sourced science or citizen science, is observation and data collection by amateur scientists who want to assist in furthering scientific understanding.

Bachmann encouraged attendants to contribute to iNaturalist, an online forum that allows people to share their observations with one another. This data helps scientists understand data about animal populations and food webs and helps them forecast how habitat change could have a domino effect on wildlife.

“When you have your porch light on and see all the moths, they are distracted and they’re basically going to starve to death because they’re so attracted to the light that they are going to run out of energy,” Bachmann said.

She encouraged researching how to lower light output and help moths survive.

“There’s great resources for how you can lower and monitor the amount of light that you have wherever you live,” Bachmann said.

Shields surrounding lamps at homes and on farms can prevent light from distracting moths while still providing visibility where it’s most needed. Bachmann also showed how she uses a headlamp to do work at her home.

She also demonstrated a setup to capture moths’ attention using a tied-up blanket, flashlights, weights and fruit. This rig lets moth hunters collect data and pictures without disturbing the insects.

Editor’s note: Diandra Polt is a 2020 graduate of Osmond High School who worked at the Daily News as part of an internship program. After the COVID-19 pandemic, she decided to take a gap year before attending college. She details her experiences here.

Oktoberfest back with fall festival events

Norfolkans have a chance to celebrate German tradition at this year's Oktoberfest on Friday and Saturday, Sept. 24 and 25.

A new base of operations means more meals for the hungry.