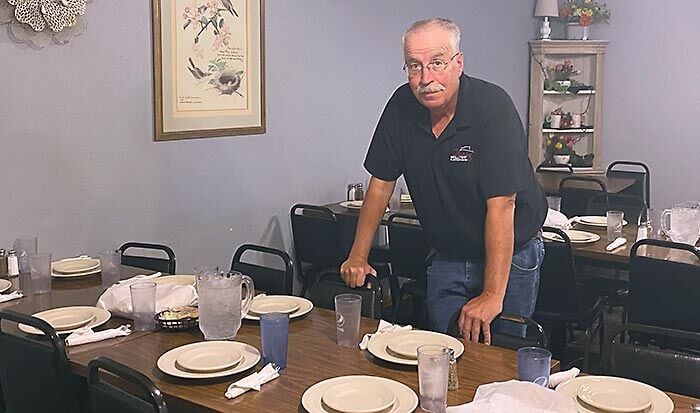 BRAD ALBERS stands in a dining area on the south side of Jerry’s Hilltop Cafe and Catering, which is located along Highway 81, about a half-mile south of Highway 20. Albers and his four siblings operate the business, which was selected as a 2022 inductee into the Norfolk Area Business Hall of Fame. 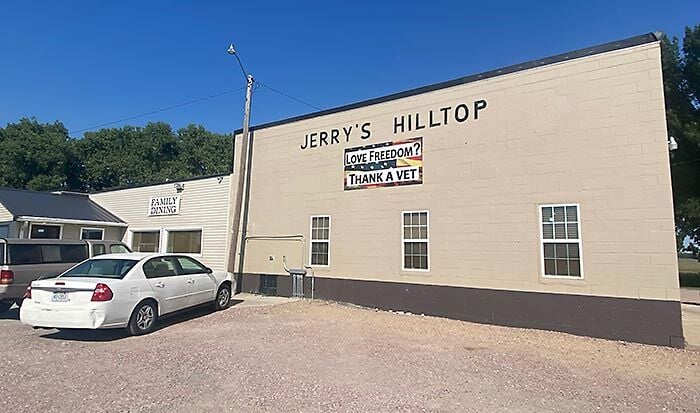 BRAD ALBERS stands in a dining area on the south side of Jerry’s Hilltop Cafe and Catering, which is located along Highway 81, about a half-mile south of Highway 20. Albers and his four siblings operate the business, which was selected as a 2022 inductee into the Norfolk Area Business Hall of Fame.

Jerry’s Hilltop Cafe and Catering is much more than a go-to place for food and drinks.

While the restaurant southwest of Randolph along Highway 81 has forged success through must-have daily menu options and an ever-growing catering business, what often brings customers in are the warm spirit and family-friendly atmosphere from the staff.

The hospitality and services provided by Jerry’s Hilltop, in addition to a long-standing culture of hard work and selflessness, were the main criteria for its selection as a 2022 inductee into the Norfolk Area Business Hall of Fame. The hall of fame is a recognition program started by the Daily News and First National Bank of Omaha to honor deserving local and area businesses for their longevity, commitment to their employees and involvement in civic and charitable affairs.

Jerry’s Hilltop got its start in 1969, when Alice “Toots” Albers and her husband, Jerry, purchased the business from Toots’ mother. The business started as a gas and service station and had a full garage on the south end, small cafe, oil room and a bunk room that served truckers before sleeper cabs became the norm.

In the 1990s, the restaurant expanded into the garage area before the eventual evolution of a convenience store. About 12 years ago, the east dining room was affixed and, about 17 years ago, catering was added and has become about half of the business at Jerry’s Hilltop.

Jerry Albers, who oversaw much of the business’ expansion, died in 2014. Toots Albers, at 85 years old, is still involved in much of the business' decision making. Five Albers siblings — Jerry’s and Toots’ children — started working at the restaurant in some capacity as kids and still work there today.

Each sibling has found a niche in the cafe, convenience store, catering and feed business. Gail Hansen handles all the catering; Valorie Wessel is the kitchen manager; Doug Albers does the ordering and the feed business; Brad Albers is the bookkeeper and maintenance man; and Pam Libra oversees the staff and scheduling.

Brad Albers, the youngest sibling, said he was 5 years old when he began mopping floors and doing dishes. His role at the business continually evolved, and he worked at the restaurant through the remainder of his childhood before going on a 12-year hiatus to go to college and work his first job out of school.

In the early 1990s, Jerry Albers was diagnosed as diabetic and had health issues to address. Brad Albers said his father’s health, combined with the restaurant’s need for help, brought him back.

“So I kind of figured I'd do this a couple years,” he said. “I didn't think I’d be doing this still almost 30 years later. Time just flies by.”

As the business has grown, so has the staff. Besides the Albers siblings, Jerry’s employs 35 full- and part-timers — about 15 cooks and 20 servers, Albers said. Employees at the cafe include teenagers looking to earn $50-$75 in spending money for the week, college students obtaining a source of income to pay for tuition, and longtime workers who have given decades of their lives to the cafe.

But what sets Jerry’s apart from most businesses is the Albers siblings’ willingness to lend a helping hand, particularly to younger employees. A letter nominating Jerry’s Hilltop for the Norfolk Area Business Hall of Fame said the business had hired countless teenagers in its 53 years of business and helped transform young employees into upstanding adults.

Brad Albers said multiple generations of several families have come to work at Jerry’s Hilltop over the years. Seeing former employees’ children grow up, he said, puts into perspective how much the business and its staff have evolved since 1969.

“When you’ve got teenagers growing up, getting married and then their kids come and work here, it’s a really neat thing,” he said. “It feels like one big family.”

Motorists also have felt the hospitality provided by Jerry’s over the years. During winter storms, drivers who have nowhere to go have taken refuge at the cafe.

About 13 years ago, roughly 150 people were stranded at Jerry’s Hilltop for at least two days. Some of the Albers siblings cooked breakfast, lunch and dinner, and people came through a buffet line in the kitchen to be served, free of charge.

People washed their dishes and many placed money in a donation bucket as a token of appreciation for the siblings.

“That’s something none of us could forget,” Brad Albers said.

Albers said 2020 had looked as though it was going to be “our best year yet” until COVID-19 started to blanket the U.S. early that year.

When the pandemic forced Jerry’s to close its dining room area in March 2020, the family didn’t know if the business would survive.

“Thank God for the community, or we would have never made it through if we didn't have people supporting us all the time,” Albers said.

Like most restaurants that survived the pandemic, Jerry’s offered takeout food orders, and people from Randolph and across the area showed up in waves, helping the restaurant to continue operating.

“Wow, that was a scary time,” Albers said. “But we made it through. We’ve really had to find ways to adapt over the years, and (COVID) was probably the most major thing we had to adjust to.”

Albers said business has returned to pre-pandemic form, and there are hardly any empty seats on the busiest days. Catering has been in high demand, he said, and the business is expecting to cater 60 or more weddings in 2022.

Eventually, Jerry’s is going to need to expand its kitchen, Albers said. He doesn’t know how a kitchen expansion will happen, or how soon such a project will have to materialize, but the demand has raised the need in recent years.

Regardless of how much kitchen space Jerry’s has, the business will continue to make its meals fresh, Albers said, something his parents took pride in from the business’ inception.

Albers, who grinned when he said he’d likely be working until he’s 85, like his mother, called it “an honor” for Jerry’s Hilltop to be inducted into the Norfolk Area Business Hall of Fame.

“You feel pretty good that you know people are thinking about you,” Albers said. “It gives you something to be proud of.”

Football season is in full swing, but October means that playoff baseball — and the Fall Classic — are right around the corner.