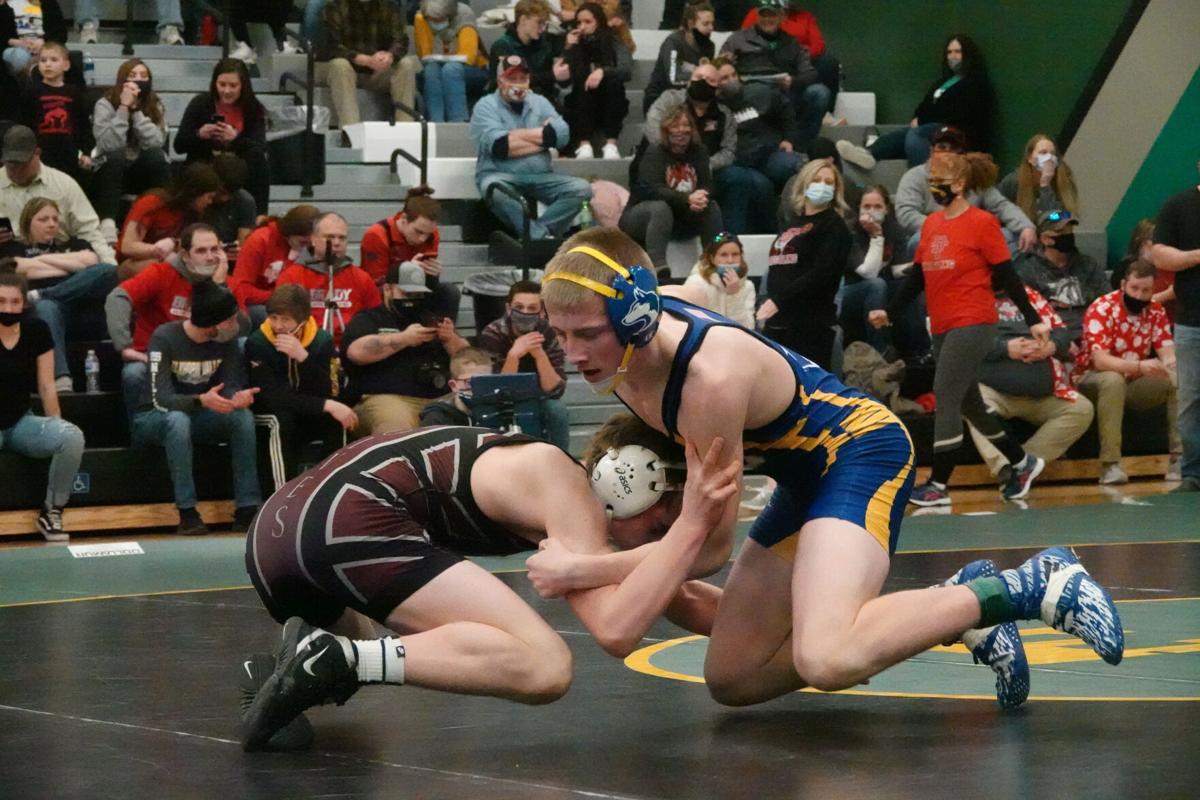 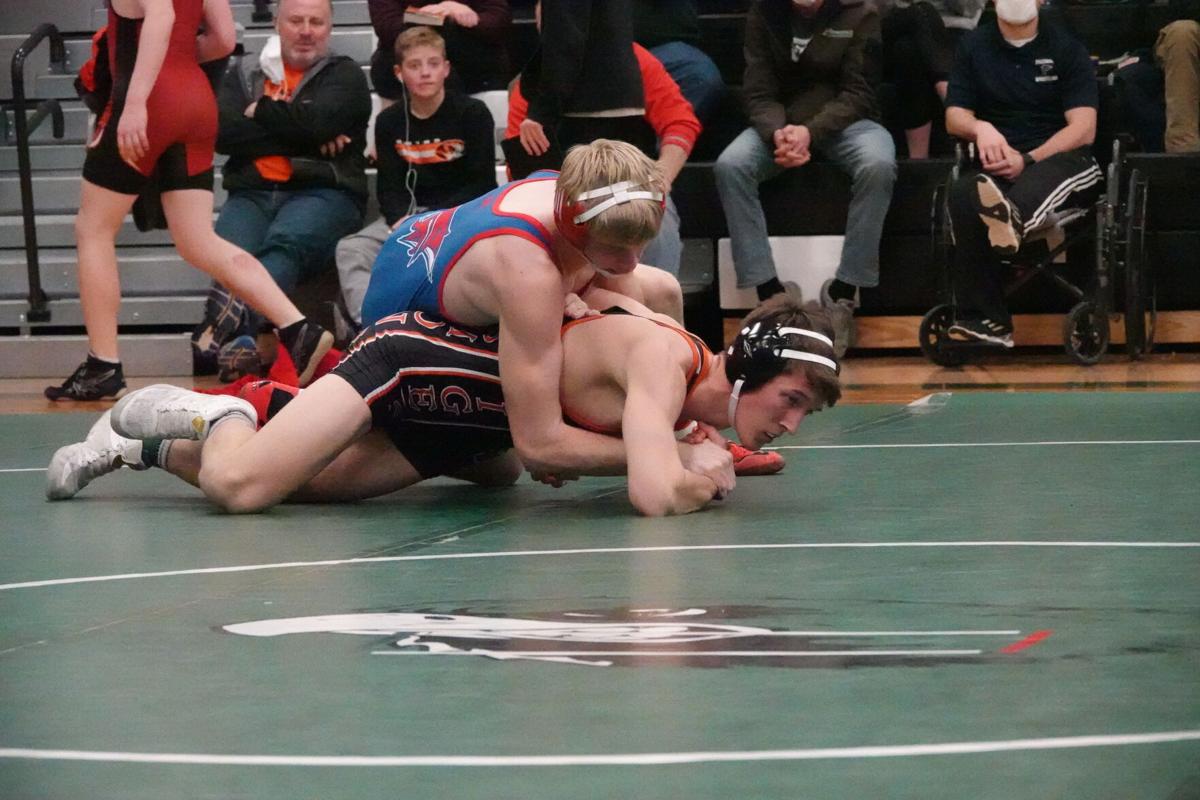 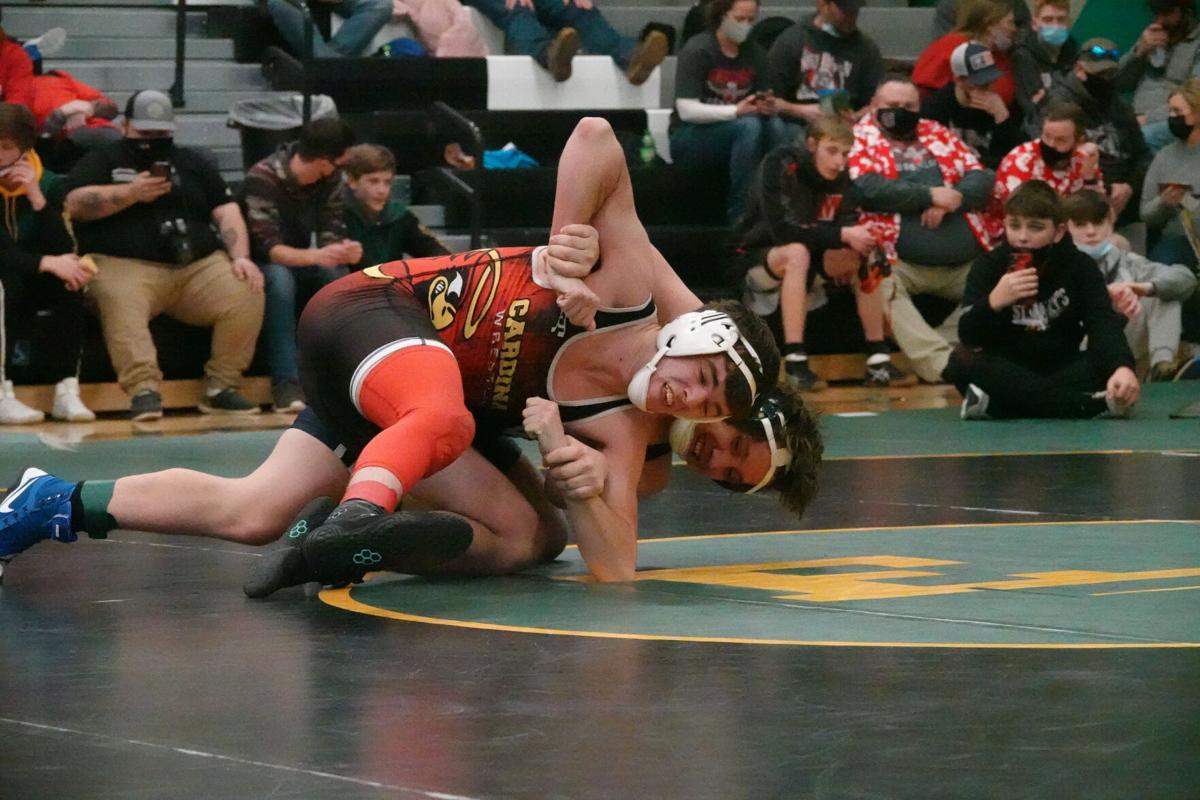 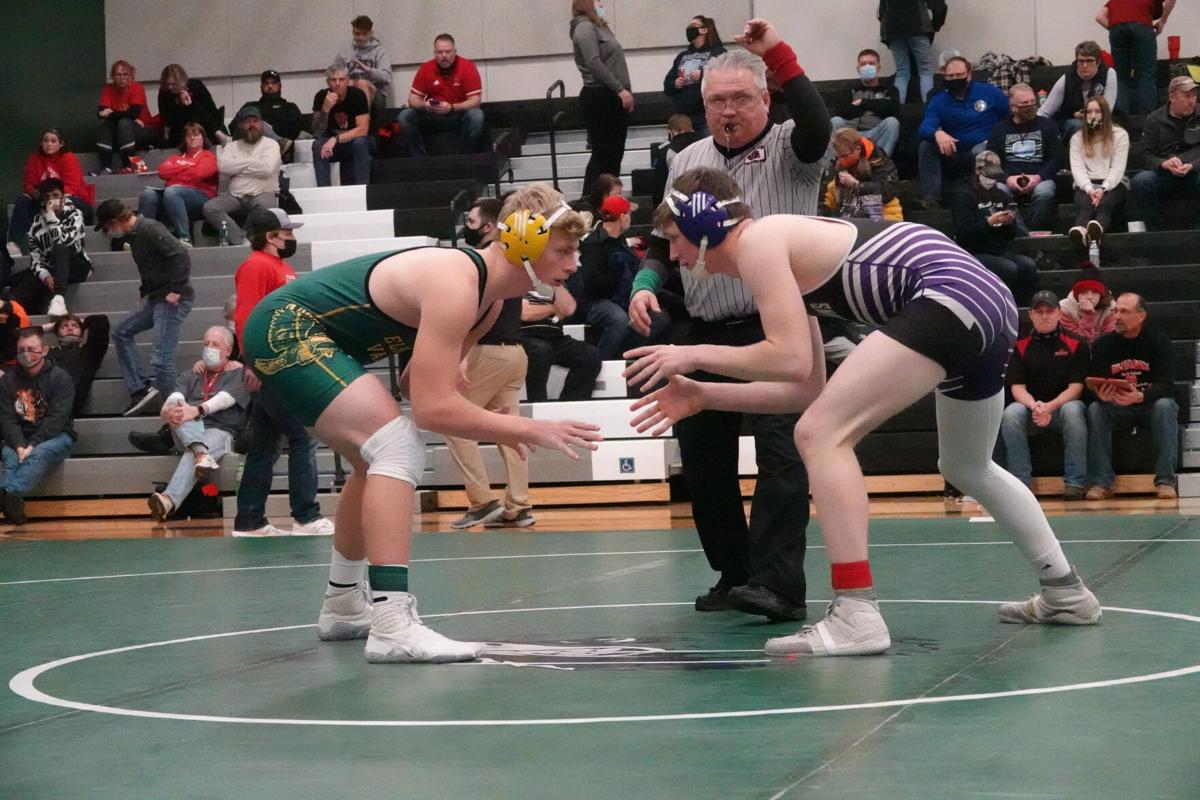 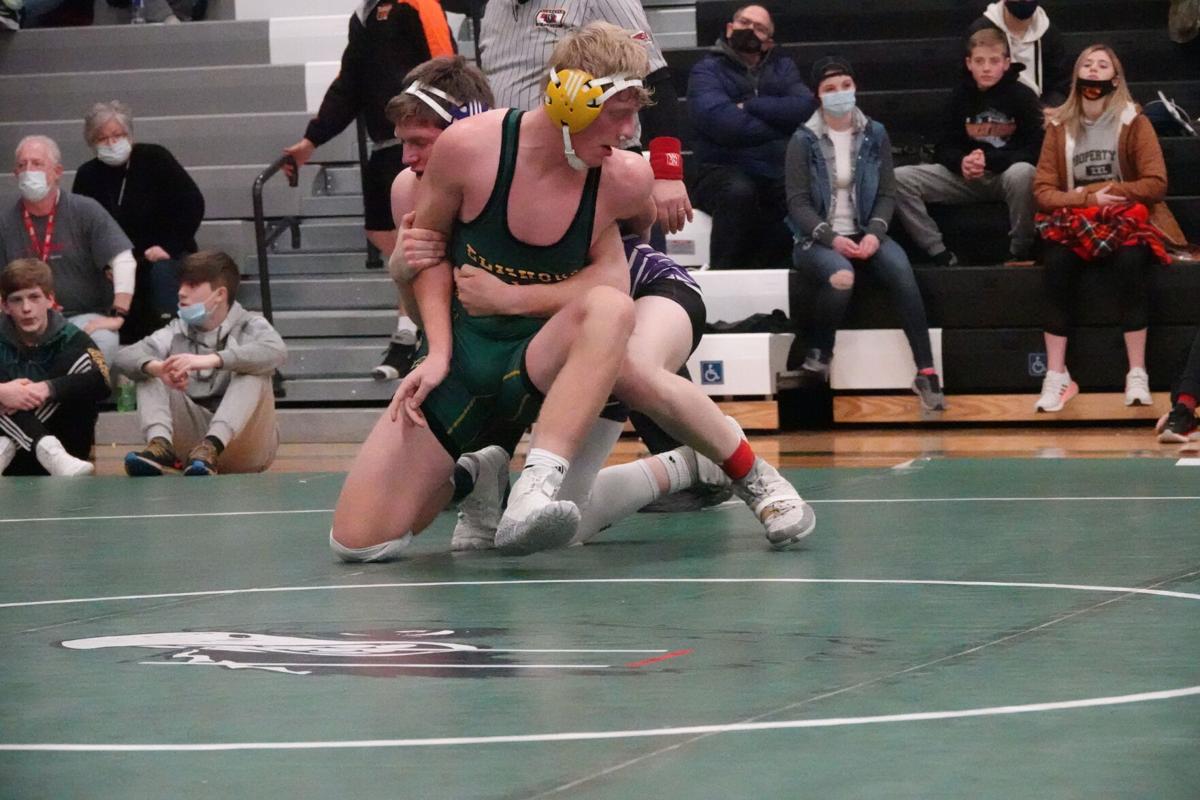 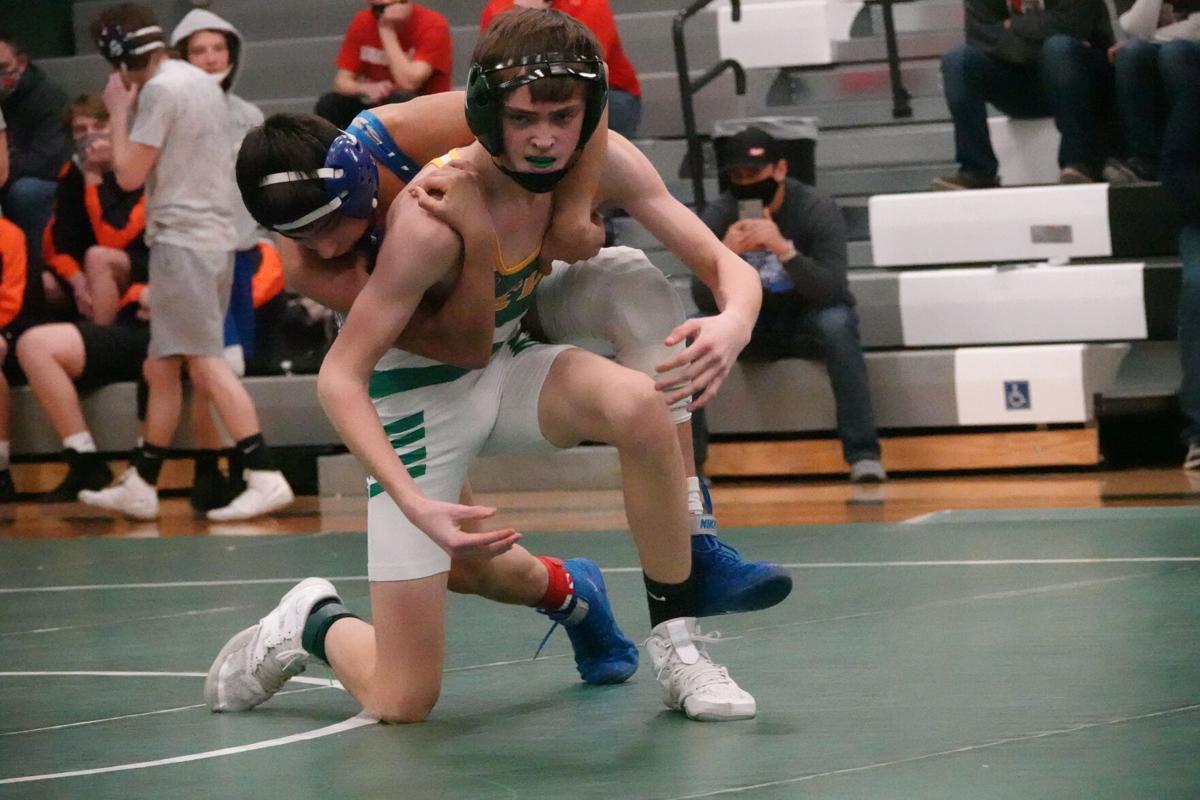 TILDEN — Despite qualifying nine wrestlers for next week’s Nebraska State Wrestling Championships in Omaha at the CHI Health Center, Tilden-Elkhorn Valley could get no higher than third in Saturday’s D-2 district tournament to determine next week’s individual tournament.

Three Falcon qualifiers did not score a point for Elkhorn Valley and two finalists met teammates in the finals.

“It’s kind of a ‘good’ curse, if there is such a thing,” Falcon coach Joey Tegeler said. “We want to get as many of our wrestlers on the mat as possible.”

The Falcons are missing some middle weights but have plenty of talent from 138 pounds down to 106.

If all of the Elkhorn Valley wrestlers had scored, the Falcons win the district, a fact that doesn’t bother Tegeler in the least.

“We know what the scoring is heading into the meets,” he said. “We’d rather get more kids on the mat and keep more kids interested in wrestling in the program. I’m glad we’re in Class D where they have that rule.”

“That rule” is Class D teams are allowed to place more than one wrestler in a weight class, but only one wrestler is designated as the scorer for the team at that weight with regard to the team total.

Southwest out of Bartley won the tournament with 120 team points and will take eight wrestlers to Omaha later this week while Twin Loup was the runner-up with 112 points and will be traveling to Omaha with seven qualifiers.

The Falcons won every weight class in the district from 113 pounds to 126 pounds and placed second at 138.

Hunter Bennett started the Elkhorn Valley parade in the finals and improved to 43-0 with a major decision over Carter Beckman from Elgin Public/Pope John 18-5.

Bennett, a senior, is the returning state champion and has qualified for the state individual meet all four years in high school.

“I can’t wait to get back down there (to Omaha) and wrestle for another title,” Bennett said. “It would be a great way to end my days wrestling for this team.”

Bennett qualified as a freshman but didn’t medal, placed fourth as a sophomore and then won last season.

Beckman, a sophomore, looked forward to wrestling Bennett on Saturday and will continue on his quest to medal this year.

“I wanted to wrestle him to see where I needed to be,” Beckman said.

Beckman was the lone wrestler to make it to the district round for EP/PJ, but he intends to stick around at Omaha for the entire tournament.

“I think if I wrestle up to my potential,” Beckman said, “I can get in the medals. I’ll get down there and do my best and see what happens.”

Zach Hartl won at 120 over teammate Owen Vondra and then Adam Miller remained undefeated at 126 with a win over fellow Falcon Tristan Smith.

Reed Bennett placed second at 138 when he was pinned in the finals with three seconds remaining on the clock by Garrett Latimer of Southwest.

“This had been a different season for everyone,” Tegeler said. “We have made it to the end and are looking forward to getting to Omaha and wrestling. It’s the goal for everyone.”