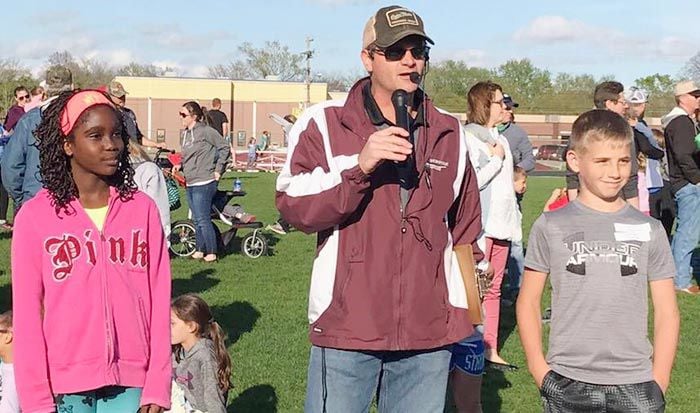 CHUCK OLSEN of Norfolk introduces Norfolk Youth Track Club members Jamaya Koehlmoos (left) and Rowdy Bauer, both of Norfolk, who in the past have qualified for the USATF National Junior Olympic Track & Field Championships. 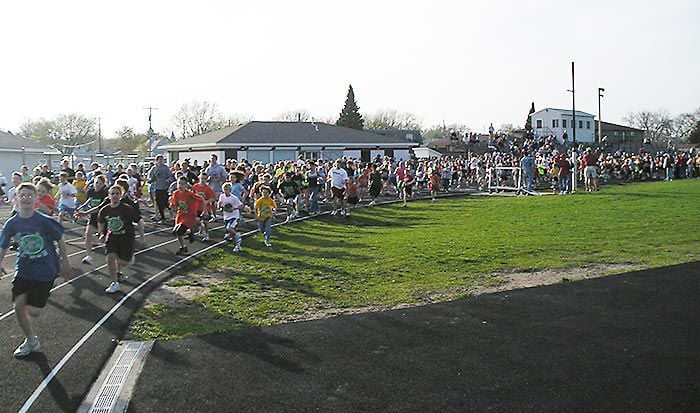 AS IS THE tradition, members of the Northeast Nebraska Youth Track Club run a lap on the track surrounding Johnny Carson Field at the end of practice in this 2019 photo.

CHUCK OLSEN of Norfolk introduces Norfolk Youth Track Club members Jamaya Koehlmoos (left) and Rowdy Bauer, both of Norfolk, who in the past have qualified for the USATF National Junior Olympic Track & Field Championships.

AS IS THE tradition, members of the Northeast Nebraska Youth Track Club run a lap on the track surrounding Johnny Carson Field at the end of practice in this 2019 photo.

The sport of track and field has flowed through the blood of Chuck Olsen so much throughout his lifetime, which has led to an award given to him for the love of the sport.

Olsen, who got involved with the Norfolk Youth Track Club in 1994 and was the director for 25 years, is being honored with this year's Northeast Nebraska Track and Field Achievement Award. If not for the COVID-19 pandemic that halted the event, Olsen was supposed to be given the award at the Norfolk Track and Field Classic on April 30.

It was a proud moment for Olsen and the rest of the Norfolk Youth Track Club when he got the call about the award.

Olsen was born and raised in Grand Island, where he went to Grand Island Senior High and competed in track and field.

He later went to Nebraska Wesleyan University as a sprinter for the track and field team, where he became an eight-time NCAA All-American in indoor and outdoor track and field.

In 1993, he and his family moved to Norfolk, where he became a founding partner of CalmWater Financial Group and a year later he got involved as the director for the Norfolk Youth Track Club.

Olsen has helped the club grow throughout his 25 years of being involved into what it is today.

The program grew from about 200 kids in the first couple of years to more than 500 now.

The program allows kids at a young age to get into the sport early on in their lives along with the other sports that they might participate in, which allows them to get experience with the sport before they enter middle school and high school.

This allows kids to try a sport at a young age “so that when they are in preschool, kindergarten and all the way through elementary school, that they have had an opportunity to have those experiences without demanding an entire season."

The Norfolk Youth Track Club season starts at the beginning of April and goes all the way through the beginning of May. Ages range from 3 years old to 12 years old, giving them an opportunity to compete in the future.

During the season, 80 volunteers would help out along with parents and high school track and field athletes who were able to bring the program together smoothly in the month they have together.

"Letting the kids have a place to be introduced to the sport without demanding a ton of their time was instrumental," Olsen said.

Nearly 150 races take place in a two-hour time span at the track meets, thanks to the volunteers, parents and families involved, Olsen said.

"We would be encouraged by parents of young individuals who love the sport of track and field to step up and take this program to a new level," he said.

There have been a few kids who have gone through the program and become Olympic-caliber athletes.

Jeremy Scott made it to the 2012 Olympics as he competed in the pole vault, and Nicole Brungardt was on the USA bobsled team and competed in the 2019 Women's Bobsled World Championships.

Olsen is honored to have received the 2020 Northeast Nebraska Track and Field Achievement Award, but it is all thanks to all the people who have been involved with the Norfolk Youth Track Club, Olsen said.

"I'm really proud of the youth track program and getting so many kids introduced to the sport at a young age, but it's not just me that got us to that point," he said.

The award will be presented to Olsen at the Norfolk Track and Field Classic in 2021.