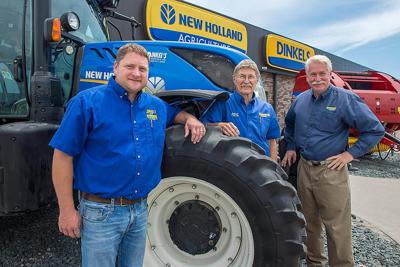 Every other year, Dinkel Implement throws an enormous party.

In the past, the event has featured notable speakers, musicians and members of management from the New Holland brand sold by the family company. But year after year, the most important people who come to the invitation-only affair are those for whom the party is thrown: Dinkel Implement customers.

The four-generation family business’ commitment to its customers was a determining factor in the decision to induct Dinkel Implement into the Norfolk Area Business Hall of Fame, a recognition effort sponsored by the Daily News and First National Bank of Omaha in Norfolk.

While the Dinkels said they were surprised to be named to the hall of fame, they also expressed reluctance and humility in being selected for the honor: “We don’t really consider our business to be a hall of fame type of business,” Brad Dinkel said.

Dinkel Implement has served the Norfolk area since 1952. That’s when Leon Dinkel — as well as his father, Elmer, and brother, Loren — bought Knievel Motor Co.

Leon had possessed a lifelong interest in agriculture in Northeast Nebraska. Growing up, he was a charter member of the Norfolk FFA and then worked in ag equipment sales. He had worked at Knievel Motor Co. for six years before the family purchased the business, then located at 315 S. First St. in Norfolk.

Hudson autos and Allis Chalmers tractors were among the products offered by the company in its early days.

Over the years, the dealership has sold a variety of equipment and product lines and was a “short line” only dealer — selling specialty farm equipment such as harvesting machines and hay tools — for several years.

“We went a long time without selling any tractors at all,” said Larry, who with brother John, has been involved in the family business full time since the 1970s.

Dinkel Implement began its relationship with New Holland in the mid-1950s and sold its first New Idea Uni-System in Nebraska in 1967. Sales of the Uni-System — as well as the New Holland Twin Rotor TR 70 combine, which was introduced in 1976 — were instrumental in helping the business survive the tough times of the 1970s and early 1980s.

“(The Uni-System) had a main power unit, and you could put a combine or a forage harvester or a corn picker on it,” Larry said. “When your customer needed to trade those basic units, it didn’t cost him an arm and a leg to do that. It was a very good investment through the ’80s and mid-’70s.”

Dinkel Implement’s business now includes the sales of not only New Holland but also Kubota small tractors and commercial mowers, the JCB line of large equipment and Kinze planters among its offerings.

The physical presence of the business has changed since the early days, as well. A Scribner location was added to expand sales and service in 1983, and the main location in Norfolk moved to a new, larger facility at 3615 W. Norfolk Ave. in the early 1990s.

Since the move, Dinkel Implement has undertaken three additional expansion projects to better serve its customers in areas of equipment rental, sales and service.

John said service has been an important part of the business, and the company’s employees are instrumental in making sure the needs of customers are taken care of.

“You can have all of the buildings you want but without employees, that doesn’t mean much. We have a lot of great long-term employees,” John said.

The 25 full-time employees of Dinkel Implement have a combined 310 years of experience with the company, including Gary Ramold, who has been with Dinkel since 1979, and Scott Meier and Shannon Sorrick, who have been with the company for three decades apiece.

Brad Dinkel echoed the praise for employees delivered by his father before adding that building the best workforce is a big challenge for many companies in Northeast Nebraska; Dinkel Implement is no exception.

Other challenges faced by the the Dinkels’ business include the ever-shifting ag economy and the shrinking number of small farm operations; fewer farmers means fewer people with whom to do business, which means it is imperative to help customers run as efficiently as possible.

John said he believes being independent and avoiding the industry trend of dealership consolidation also helps create a stronger relationship with their customers, some of whom live as far away as north central Montana.

“We feel we can give a little more specialized attention to our customers that way,” John said. “I think some customers appreciate dealing with smaller family-owned (businesses) rather than a larger corporation.”

For Brad — who began full time at Dinkel Implement in 2008 and represents the fourth generation of family leadership — being independent means having the freedom to grow in the right direction at the right time as they move into the future.

“You’ve got to grow or you’re not going to make it. You’ve got to keep continuing to grow — whether that means different product lines or enhancing our product line,” he said. “We’re not looking for any more locations or stores to buy anything or to be bought. We really like where we’re at right now. We like the market we’re in. We just want to try to do as well as we can with what we’re doing.”

From the nomination letter:

"Family businesses have long been the lifeblood of our community. And multi-generational success is not easy. This requires clear values, vision and commitment to the greater good. And from the beginning, the attention to and appreciation for their customers remains. In a world ever changing, and the political environment ever moving, this company has never forgotten its foundation — THE CUSTOMER. The Dinkel family has a rich and storied history in Northeast Nebraska, and the success of Dinkel Implement is noteworthy."