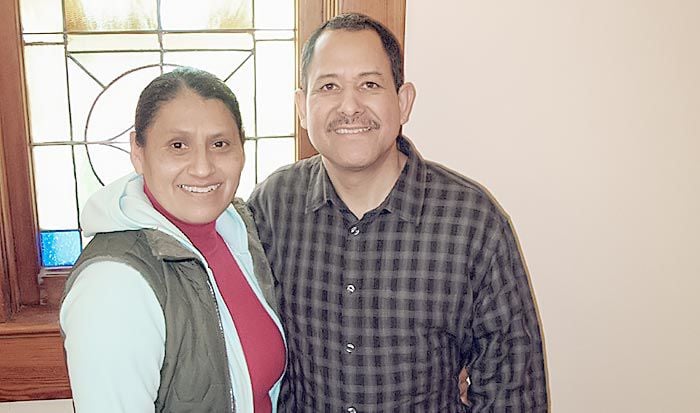 The Rev. Alfonso Diaz and his wife Minerva Lira-Diaz will lead the New Jerusalem Apostolic Church or La Nueva Jerusalen at Beemer. The building was once utilized as the United Methodist Church. 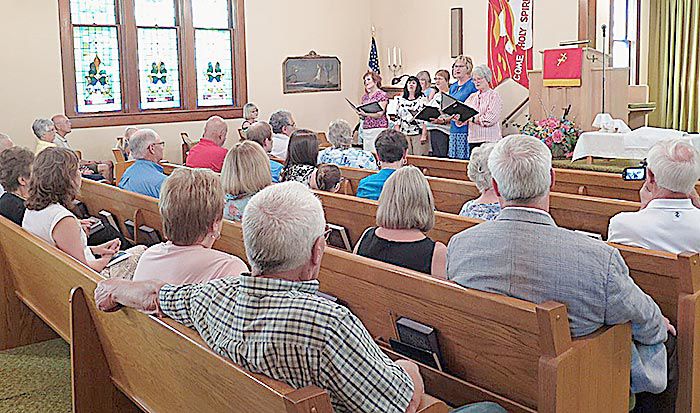 A local singing group, the Heavenly Hens, provided special music at the final service at the United Methodist Church in Beemer in May of 2019. The building has received a new lease on life as members of the The New Jerusalem Apostolic Church or La Nueva Jerusalem purchased it for their congregation.

The Rev. Alfonso Diaz and his wife Minerva Lira-Diaz will lead the New Jerusalem Apostolic Church or La Nueva Jerusalen at Beemer. The building was once utilized as the United Methodist Church.

A local singing group, the Heavenly Hens, provided special music at the final service at the United Methodist Church in Beemer in May of 2019. The building has received a new lease on life as members of the The New Jerusalem Apostolic Church or La Nueva Jerusalem purchased it for their congregation.

They made their way up to the front of a wooden-frame church in Beemer for the parish’s last service.

“There is a time for everything,” Les said, as the process began to disband the congregation, “a time to mourn and a time to dance.”

It’s now time for rejoicing as the building has found a purpose once again; a new Christian denomination soon will be moving into the vacated space.

The building has been purchased by members of The New Jerusalem Apostolic Church or La Nueva Jerusalen. The building came up for sale when the Parmenters moved to western Nebraska, where he was called to serve United Church of Christ congregations at Thedford, Seneca and Halsey. At that point, the Beemer Methodists made the sorrowful decision to close, necessitated by declining enrollment. The members of the New Jerusalem congregation had been meeting in a building on Beemer’s Main Street and felt the time was right to make the purchase.

The Apostolic congregation is led by the Rev. Alfonso Diaz. The Spanish-speaking congregation formed in 2000, and Alfonso and his wife, Minerva Lira-Diaz, have been serving there since 2011.

The couple live in Omaha and travel to Beemer on the weekends.

Services are conducted at noon on Sunday. Beginning in February, services will alternate between the downtown location and the church at the corner of Third and Fraiser streets.

Services are in Spanish, but in the future will be given in both Spanish and English. The Diaz family stresses that the worship services are for people of all ages, ethnicities and languages.

“We have many friends who don’t speak Spanish,” Diaz said.

The Apostolic congregation in Beemer has been the incubator for around 10 other congregations in Northeast Nebraska. New churches have been formed in Columbus, Fremont, Omaha, Norfolk and Wayne, to name a few, with their beginnings in the Beemer congregation. In addition, many pastors have had initial training at Beemer.

“This is like a mother of churches,” Lira-Diaz said.

Congregational members travel as far as 20-35 miles to attend services. Bible studies are held in Omaha in the middle of the week.

When asked about future dreams for the building, Diaz said, “Wow, we have too much.”

In addition to services, they plan to use the building to distribute services such as food assistance.

Diaz said he hopes to let community leaders know that “we have a refuge where people can come and pray, where they can get good advice.” A place where someone who is sick or in need can be prayed for, they said.

The building itself has a long history which will now continue. The Beemer Methodist Church congregation formed in 1886 and built a house of worship at that time. But because many walked to church in those days, they looked for a more central location within the community. They dismantled and rebuilt the church at its current site in 1904.

An open house at The New Jerusalem Apostolic Church will begin at 4:30 p.m. Sunday, Feb. 23, with a supper set to be served from 5 p.m. until 7 p.m. The public is invited.

Because of the coronavirus, Norfolk High School has officially shut down all activities for the 2019-20 school year. As a result, the seniors who would have participated in a spring sport will miss out on their final chances to play at the varsity level before moving on with their lives.

Growing up in the 1970s, one of my favorite things to do was to go roller-skating every Saturday afternoon. The rink would be packed with kids, great music would be playing, the disco ball would throw lights for us to follow across the floor, I’d fall down trying to do the limbo, my friends …