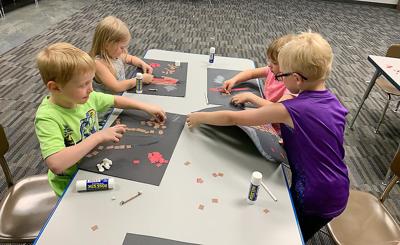 While life is not normal for most area daycare facilities, it’s improving.

So once again, the patter of tiny feet and the chatter of young voices echo around the rooms of In His Arms Community Childcare in Battle Creek.

“We actually closed on March 16 when school closed,” said Kelsey Schnoor, director of the child care center, which is associated with St. John Lutheran Church and school.

The closure was due to the emergence of the coronavirus, which has wreaked havoc on the world in the past six months.

The center reopened May 11. At this time, around half the usual number of children are attending.

That reduced number is caused by a number of factors, one of which is parents’ desire to keep their children home during the early days of the pandemic, Schnoor said.

While the pandemic has certainly affected student numbers this year, Schnoor said attendance always fluctuates this time of year, partly because the center serves a number of teachers who are able to care for their children during the summer.

“Summers are crazy anyway,” she said.

Even though attendance numbers were lower than normal, Schnoor has been able to bring back all of the staff members, although some are working reduced hours and alternating shifts, she said.

Schnoor anticipates the number of children coming to the daycare will start to increase in July, partly because restrictions are being relaxed and daycares are now allowed to have more children than they were originally.

The facility is open Monday through Friday from 6:30 a.m. to 6 p.m. It serves children between the ages of 6 months and 13 years.

To ensure everyone stays well, Schnoor and her staff are continuing to follow guidelines provided by the Elkhorn Valley Logan Public Health Department. That means parents can’t go into the facility. Instead, they call when they arrive and deliver their child — or children — to the door. Once inside, children and staff are kept together, even during meals.

In addition, all surfaces are cleaned regularly; children and staff routinely wash their hands and all other guidelines are followed.

“It does result in extra work for the staff,” Schnoor said.

Staff at the Wesley Center in Norfolk is using a similar approach to ensure the safety of children and staff.

“We’re still following CDC guidelines, including keeping families together, keeping staff together and keeping children in the classroom, even for meals,” said Michele Lawson, the director. “We take their (children’s) temperature every time they come in.”

In addition, parents are not allowed in the building. And fixtures — as well as hands — are continually sanitized.

The Wesley Center in Norfolk has remained open during the pandemic, although numbers of children attending were down considerably, Lawson said. The facility is licensed for 122 children. In March, after the coronavirus invaded, numbers dropped to around 30%, Lawson said. Those numbers have gone up to around 50%.

“With kids’ numbers going up, we’ll get some staff back,” she said.

Despite the hardships, Lawson said things are going well.

“I’m grateful to parents who have continued to support the center,” she said.

Liz Sudbeck, owner of Northern Hills Child Care Center in Norfolk, said things are “somewhat getting back to normal.”

The center has remained open during the pandemic and is staying vigilant by continually sanitizing and monitoring conditions and not allowing anyone other than staff and children in the facility.