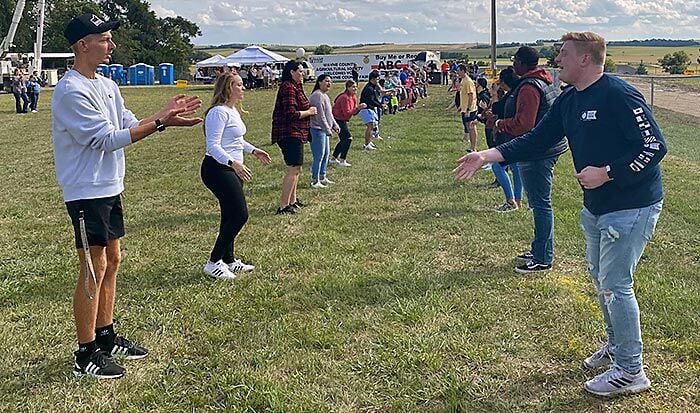 The egg toss at Wayne's chicken show saw around 50 participants. Most teams were unable to execute a toss and catch once distances reached more than 20 feet apart. 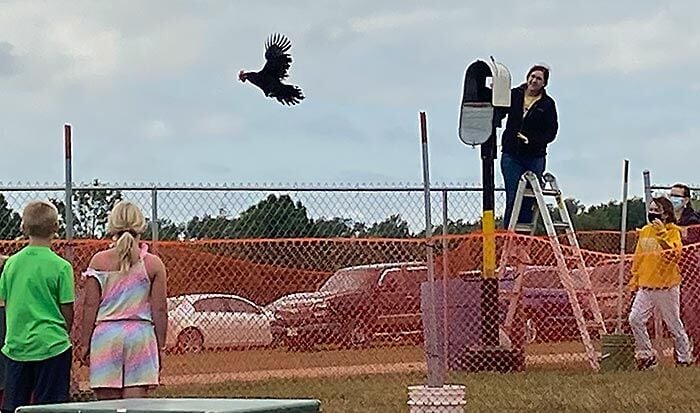 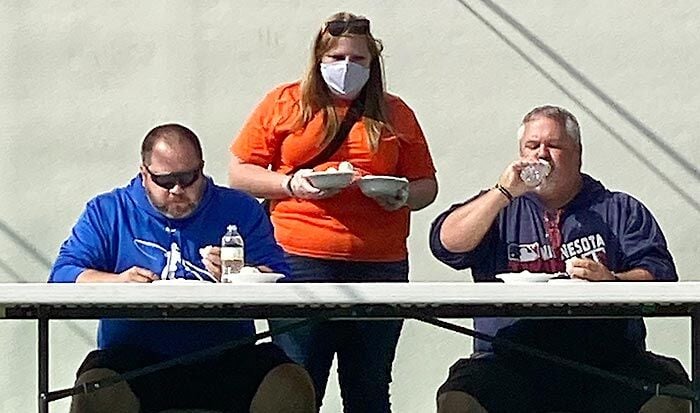 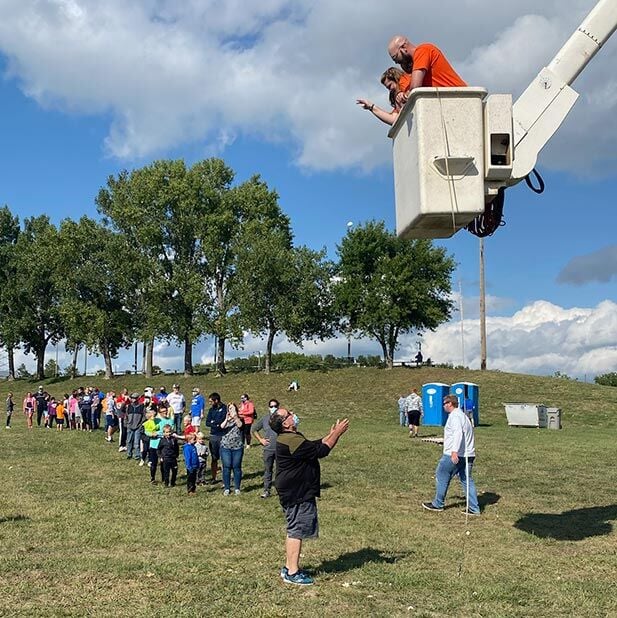 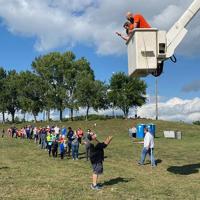 Dozens of participants partook in the egg drop contest, where Abby Schademann dropped eggs from various heights inside a crane truck. The winner of the event, Kristofor Bahr, managed to catch an egg falling from 45 feet in the air.

The egg toss at Wayne's chicken show saw around 50 participants. Most teams were unable to execute a toss and catch once distances reached more than 20 feet apart.

Dozens of participants partook in the egg drop contest, where Abby Schademann dropped eggs from various heights inside a crane truck. The winner of the event, Kristofor Bahr, managed to catch an egg falling from 45 feet in the air.

WAYNE — Kristofor Bahr loves every aspect of the Wayne Chicken Show — the camaraderie, competition, clucking and even the chickens themselves.

Bahr and hundreds of others gathered at the Wayne County Fairgrounds on Saturday for the 40th annual Wayne Chicken Show. The show, usually at Bressler Park in Wayne, was moved to the spacious fairgrounds this year to allow attendees to more easily practice social distancing.

Typically a three-day event, Wayne's chicken show saw a multitude of events canceled this year, such as the downtown Chicken Coops parade and the popular wing-eating contest.

Abby Schademann, Wayne's marketing, events and tourism coordinator, has spearheaded planning for the chicken show for the past three years. Schademann said a slight decrease in attendance at this year's show was to be expected, but that didn't hinder the Wayne Economic Development team's determination to put on a top-notch event that draws out-of-staters every year.

"Being the 40th annual show, we really wanted this one to mark its place in history somehow," Schademann said. "We did the best we could with having to move this year's event, and there were little things we had to keep in mind — more parking flags, more port-a-potties, more cones, as well as having to move around more picnic tables and bleachers."

Events that went on as planned at this year's show included: a car show; a performance from the Wayne State College marching band; live music from Ted and Alice Miller; a cement chicken auction; live chicken flying; a "best chicken legs" competition; a national cluck-off; a hard-boiled egg eating contest; an egg toss; and an egg drop/catch contest.

The national cluck-off is a fan favorite; participants are required to take the stage and cluck for at least 15 seconds (maximum 60). A panel of three judges evaluates every competitor based on authenticity, vocal projection and animation duration. John Hobbs of Hoskins was Saturday's champion in the cluck-off.

"It's a no-shame type of event," said Michael Carnes, the cluck-off's commentator.

The egg toss saw the most participants Saturday, drawing more than 50 competitors of all ages. Dozens also participated in the egg drop and chicken legs contests.

A large number of chicken show attendees participated in more than one event, and Bahr was one of Saturday's most active participants, having competed in the egg eating contest, the egg toss and the egg drop.

He won the egg drop competition, and he was the only individual in a field of more than 40 people who was able to catch an egg from 45 feet high while also keeping the egg intact.

"My strategy is always to be at the end of the line — that way, you see a bunch of people go in front of you and you know what the egg is going to do," Bahr said. "I don't like to move; I just want the egg to come to me. I played baseball in high school and amateurly, and it's just like catching a fly ball."

He finished as the runner-up in the egg eating competition for the third time in four years, downing 13 eggs in two minutes.

Bahr, who resides in Sioux Falls with his wife and two children, said his wife graduated from Wayne State College, so that's how he originally heard of the chicken show. The couple also have friends they enjoy seeing upon their return every year. Bahr said he was grateful that the Wayne community opted go forth with a scaled-back chicken show this year instead of canceling it altogether.

"When we heard about a possible cancellation in July, we were pretty bummed because this is one of the highlights of our year," Bahr said. "I was really excited when I heard they were rescheduling it. It's just a really fun thing to come do with your friends or family — and my daughters — all they know is coming to the Wayne Chicken Show."

Schademann said more than 50 volunteers helped with planning and execution of the chicken show, and the understanding that the chicken show is a staple of the Wayne community is what made the event just as special as every year that came beforehand.

"There really haven't been a lot of events we've got to hold this year that draw people to Wayne, and the chicken show still gave us a chance to do that," Schademann said. "People still want to see what's new in Wayne and check out what the town has to offer, and this is something that not only helps area businesses affected by the pandemic, but it's given the people here a boost in morale."

TILDEN — For the second straight year, Class D No. 7 Lutheran High Northeast came here facing what may be considered a turning point for its season.

PENDER — For the second time in 114 years, taps rang out over the final resting place of Civil War veteran Pvt. Alonzo Randall.

The “minefield” that used to await us as we stepped out onto the deck has disappeared. It’s been safe for two days now. Safe … but sad.

Norfolk Catholic returned to the field Friday night after last week’s game against Oakland-Craig was canceled because of COVID-19 concerns.