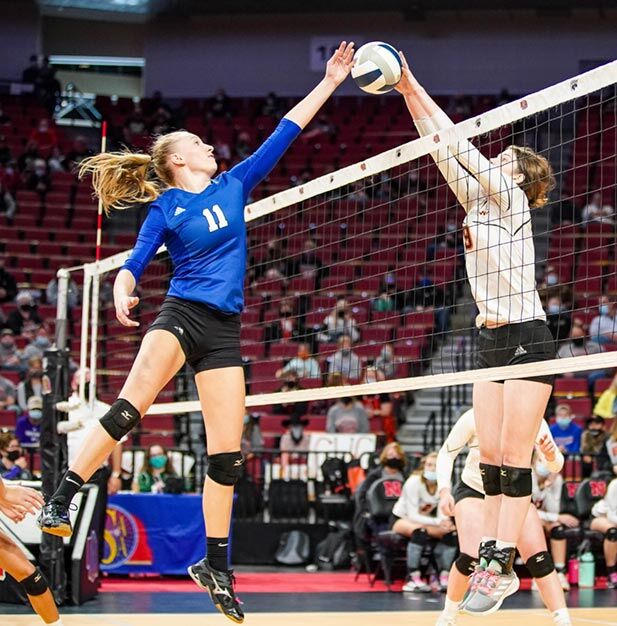 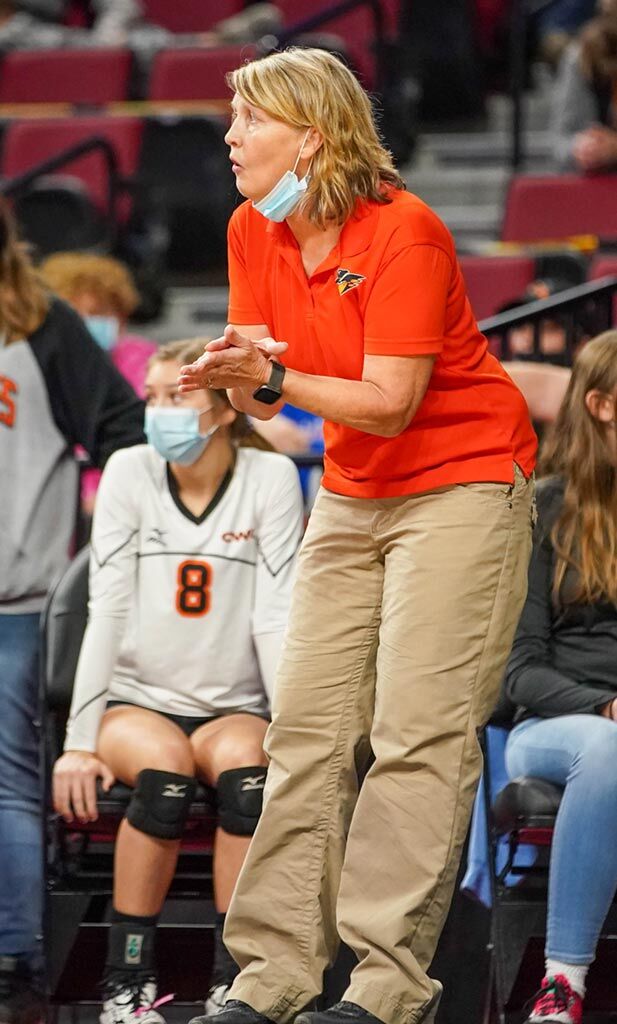 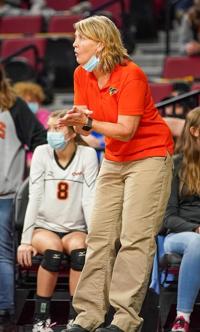 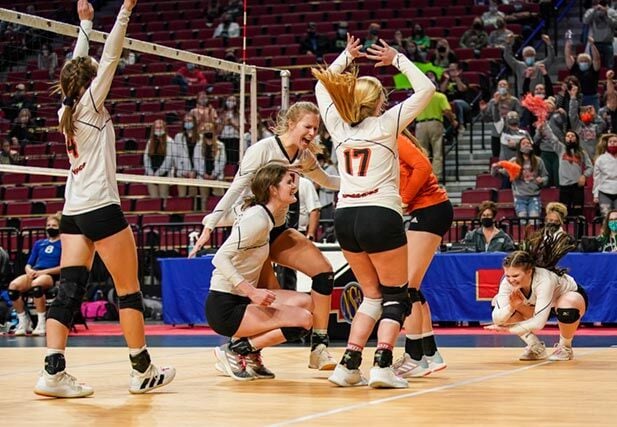 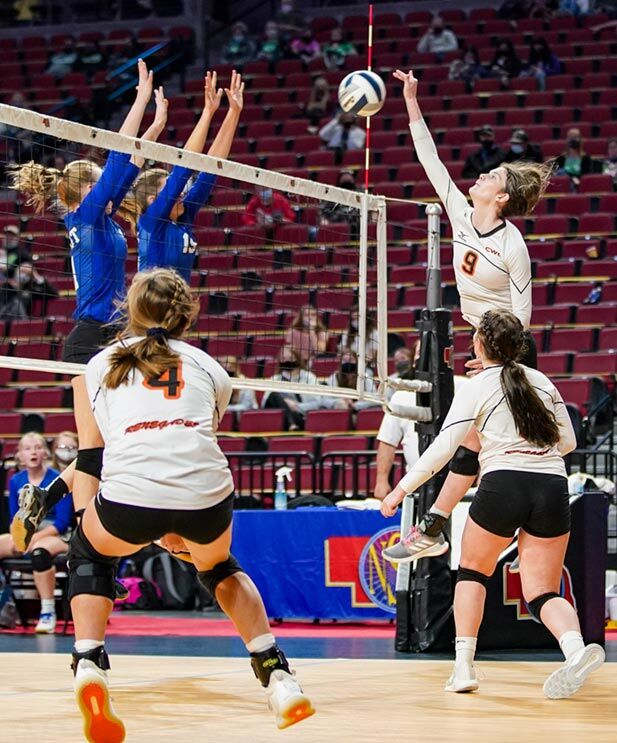 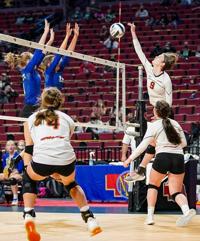 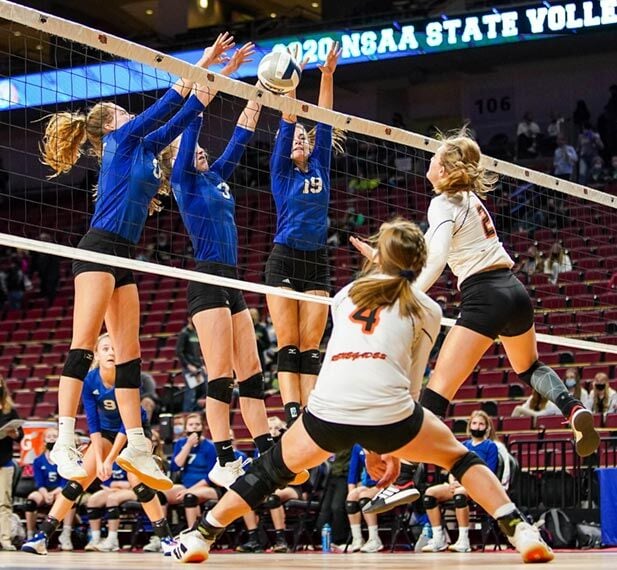 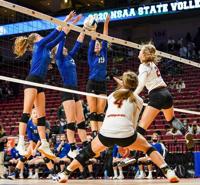 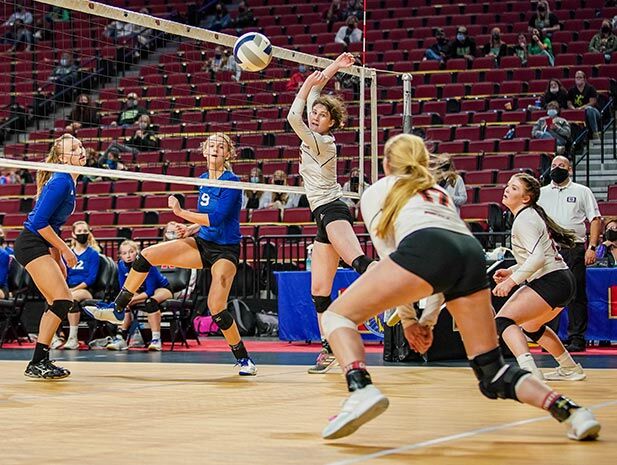 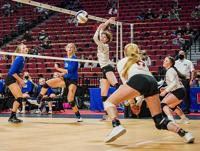 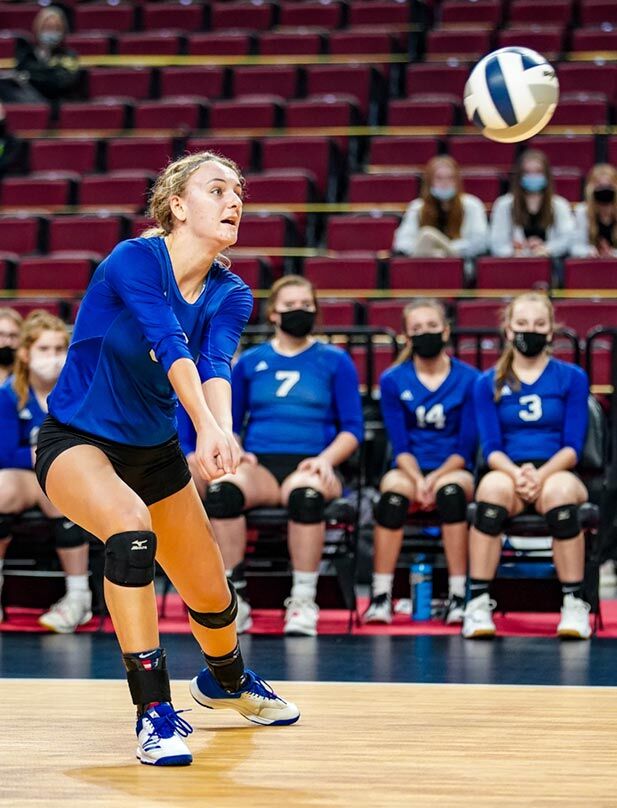 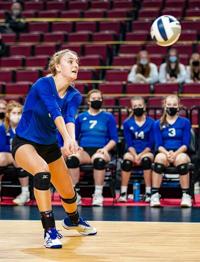 Karley Heimes digs the ball up in first round State action 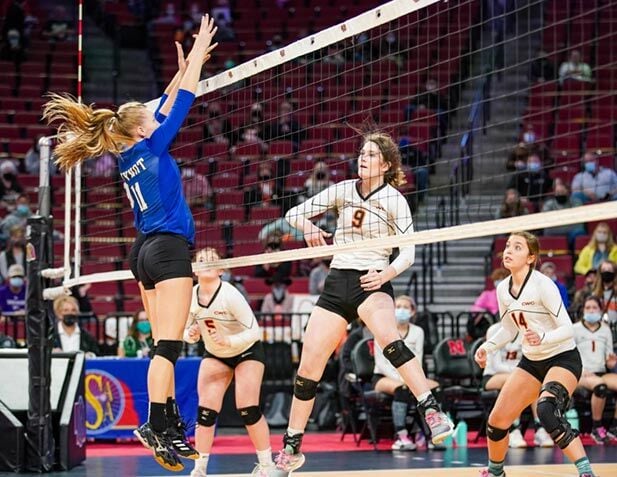 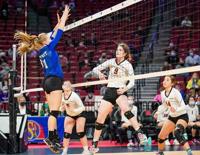 Morgan Ramsey spikes the ball past blockers from Wynot

Karley Heimes digs the ball up in first round State action

Morgan Ramsey spikes the ball past blockers from Wynot

LINCOLN — Second-seeded Chambers/Wheeler Central advanced to the Class D2 state semifinals Thursday morning with a 25-19, 24-26, 25-19, 25-22 victory over Wynot in the opening round of the state tournament at Pinnacle Bank Arena.

"It was a battle. We knew coming in, it was going to be point-for-point," CWC outside hitter Morgan Ramsey said. "The last two years, we've come down here and lost our first-round game. We didn't want that to happen again, and we put everything we had out on that floor."

CWC opened with an early first-set lead. A Tessa Metschke kill capped a 5-0 run and had the Renegades on top 6-2. The Blue Devils couldn't get closer than a three-point margin the rest of the way as CWC won set one 25-19.

After a series of early sideouts, Wynot reeled off five straight points to take a 14-8 lead in the second set and maintained the advantage until a Metschke kill leveled the score at 18 and an Emma Jonseth rocket put the Renegades on top by one.

Amber Lawson's block put Wynot back on top, and two Karley Heimes ace serves gave the Blue Devils a set point at 24-21. A service error made the score 24-22, then a Rachel Dierks kill and Metschke service ace tied it at 24.

But Kendra Pinkelman's block then provided Wynot another set point, and a CWC attack error gave the Blue Devils the win and evened the match at a set apiece.

The third set was all CWC. Ramsey — who finished with 30 kills — put the team on her back, recording four kills in a 5-0 run that gave the Renegades a 6-1 lead.

"I give a lot of props to my teammates," Ramsey said. "I can't hit unless there's a pass or there's a set and I know going up, I can swing away and someone's going to cover if I hit into that block."

The fourth set was a battle as neither team led by more than two points until CWC put together a four-point run to lead 18-14.

Wynot scrapped back to tie it at 22 before Dierks and Ramsey recorded three straight kills to provide the Renegades the 25-22 winning margin.

Both coaches agreed CWC passed and set the ball a little better on Thursday morning and that those aspects played a big role in determining the outcome.

"We struggled with passing, and that forced us out of our offense just a little bit and we had to play defense quite a bit," Wynot coach Tammy Wieseler said.

Meanwhile, Ryann Haburchak dished out 46 set assists for the winners. "Ryann's been on the court for four years," CWC coach Diane Kasselder said. "She's our team captain and our team leader. She gets it done."

CWC improved to 32-1 and will play in the semifinals on Friday at around 11 a.m. at Pinnacle Bank Arena against third-seeded and undefeated Maywood/Hayes Center.

"I don't feel like I have to coach them very much this year," Kasselder said. "They know what to do. When you get down here, volleyball takes a back seat and it becomes about attitude."