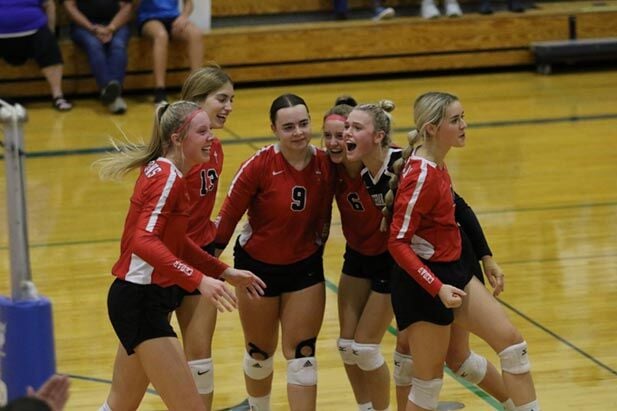 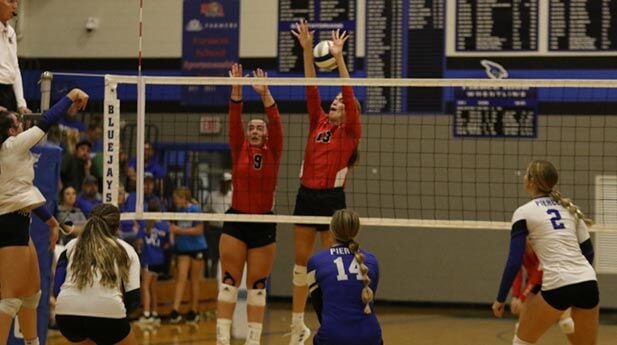 #9 Meredith McGregor and # 13 Lauren Bernecker of Hartington Cedar Catholic go up for a block during Tuesday nights match against Pierce. 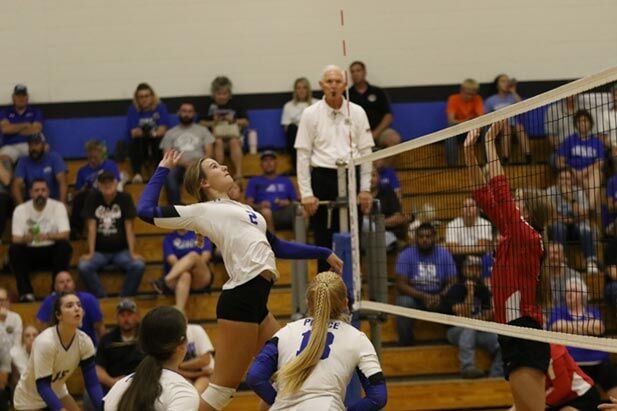 #2 Claudia Riggert of Pierce goes up for a spike during Tuesday nights match against Hartington Cedar Catholic. 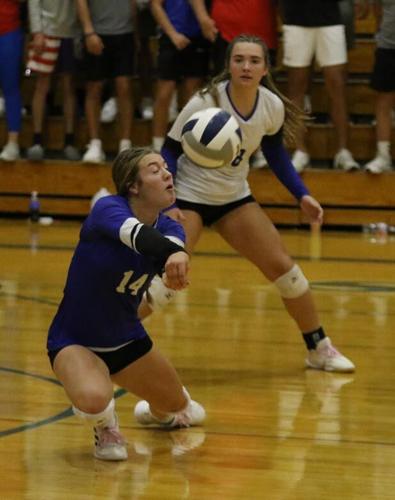 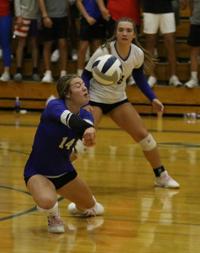 #14 Morgan Moeller of Pierce gets the dig in Tuesday nights match against Hartington Cedar Catholic in Pierce. 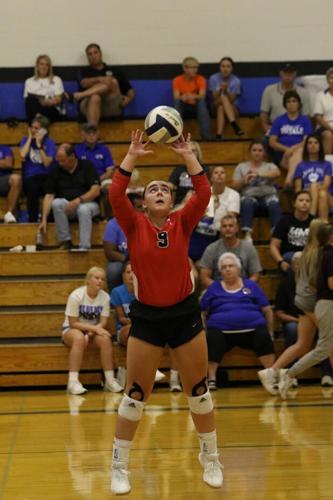 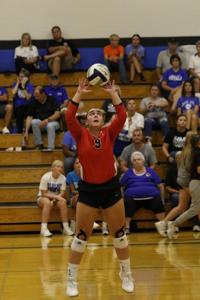 #9 Meredith McGregor sets the ball for a teammate during Tuesday nights match against Pierce. 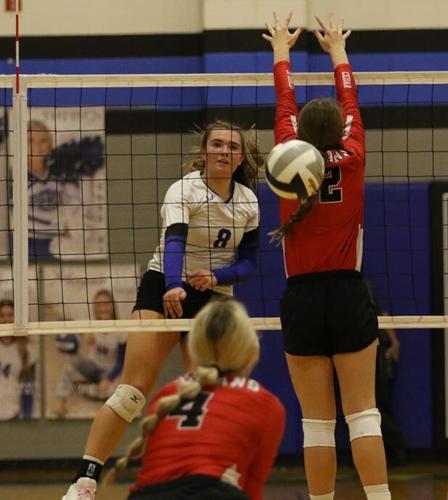 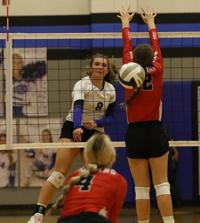 #8 Jaya Wachholtz of Pierce spikes the ball past the block of #2 Grace Wortmann of Hartington Cedar Catholic in Tuesday nights matchup in Pierce.

#9 Meredith McGregor and # 13 Lauren Bernecker of Hartington Cedar Catholic go up for a block during Tuesday nights match against Pierce.

#2 Claudia Riggert of Pierce goes up for a spike during Tuesday nights match against Hartington Cedar Catholic.

#14 Morgan Moeller of Pierce gets the dig in Tuesday nights match against Hartington Cedar Catholic in Pierce.

#9 Meredith McGregor sets the ball for a teammate during Tuesday nights match against Pierce.

#8 Jaya Wachholtz of Pierce spikes the ball past the block of #2 Grace Wortmann of Hartington Cedar Catholic in Tuesday nights matchup in Pierce.

PIERCE — Hartington Cedar Catholic got a little revenge and a big confidence boost all in one on Tuesday.

Cedar Catholic avenged a 2-0 loss to the Bluejays from the Wakefield tournament on Sept. 8. Since that time, the Trojans (12-6) have won nine of 10 matches with the only loss coming in four sets to Class D No. 1 Norfolk Catholic.

“It’s such a confidence booster,” said Kathol, a 6-foot senior. “We were so prepared going into it, and we just gave it our all. It really raises our bar for the rest of our games.

“We’ve been putting in so much work in practice. We’ve been really focusing on the things we knew they were going to do, so we did our best.”

Cedar Catholic coach Denae Buss said the biggest difference between the first set and the last three was her team’s mindset.

“We truly wanted it,” she said. “I felt like our energy came up a notch. I think we wondered, ‘Can we play with Pierce?’ because their record’s out there. We know they are a very solid team.

“Believing that we’re going to go the extra step helped.”

But the Trojans scored the first three points in the second and went up by as many as 21-15. Pierce used a 5-0 run to get back within one before Cedar Catholic closed it out on a Kathol kill.

The third set followed the same script. The Trojans led 22-15, saw the Bluejays get back within one and then sealed up a 2-1 advantage on an ace from Katy Jones.

“They made plays when they needed to,” Pierce coach Zach Weber said. “That’s the difference in those close ones when it is 20-20 or close to that. Who is going to make the play? Tonight, it fell in their direction.”

Buss said the Trojans did a nice job of holding their composure when Pierce was making its charges.

“We took a deep breath, went back to fundamentals and knew that it was OK,” she said. “We needed to stack our good instead of stacking our bad on top of more bad.

“I thought our block started doing a good job of slowing them down because they can hit the line like no tomorrow.”

It was Cedar Catholic’s turn to try to come back in the fourth set, and this one was successful.

Pierce raced out to a 12-6 lead, but the Trojans stormed back to go up 22-18 and eventually won the match on Kathol’s last of her 26 kills.

“Our energy boost was so good in those last three sets,” Kathol said. “We went into that second one knowing we were going to clear out that first one and finish the next three.

“It was amazing. I think this was the best we’ve played all year.”

Meredith McGregor finished with 37 set assists for the Trojans.

The Bluejays were out of system too much to be able to extend their winning streak to 12.

“It was kind of same story, different game there,” Weber said. “Serve and serve receive killed us. We had a heck of a time getting in system. I think we were below 30% in system on our serve receives.

He expects Pierce to bounce back just like it did after its other loss to Norfolk Catholic in five sets in the second match of the season.

“Similar to last time we lost, we don’t have a lot of time to pout or cry about it,” he said. “We have a tough Lutheran High team on the road on Thursday then go to a tough tournament in Madison on Saturday. There are matches out there for redemption, but we have to come at it with a better mindset. We need to attack practice tomorrow like it’s a match.”

Bias a factor in all news

Bias is an issue that plagues modern journalism. As far as the eye can see, the malicious smiles of “reporters” and “journalists” grin at you, their unnaturally white teeth glinting (or in Brian Stelter's case, their heads glinting.) I’m sure all of us can call to mind at least a few times w…

GRENADA, Colo. — Today, bluish-green sagebrush does what it can to keep the sand from blowing and seeping through closed doors and windows of vehicles that travel unpaved roads of southeast Colorado.

Journalists have responsibility to be unbiased

Recently, a Gallup  survey indicated that Americans are increasingly skeptical of news they think is filled with bias. In that survey, it was found that 36% of U.S. adults reported that they interacted with the media with a great deal or fair amount of trust. That leaves 64% of the public wi…

Cardinals starting to warm up

Heading into the 2022 season, the Boone Central Cardinals were flying high.

Over the past few years, Lutheran schools in Norfolk have been experiencing an increase in non-Lutheran students.

Planting a tree in the terrace, currently prohibited by ordinance in Norfolk, could be made legal in certain circumstances with a permit if the Norfolk City Council approves an ordinance considered Monday evening.

STANTON — A Stanton man could face up to 11 years in prison after he was convicted of three charges related to sexual abuse of three minors between 1999 and 2007.

Over the years, the Norfolk Fire Division has been blessed with stability.

Not easy finding fix for bias

Are journalists biased or have they truly mastered the art of impartiality? Obviously living in a world where bias didn’t exist would be super helpful when it comes to fact-digging. However, disregarding all bias on a topic is nearly impossible. That being said, what is the appropriate stanc…

Is the country in a recession?