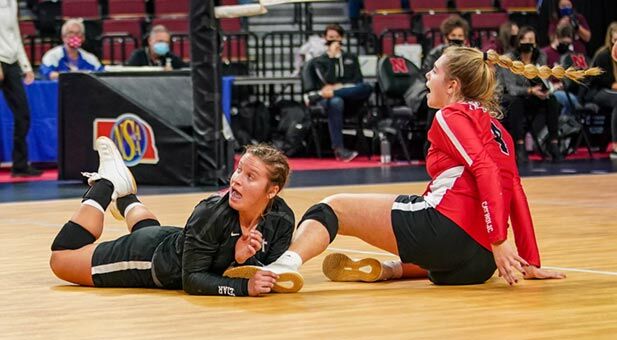 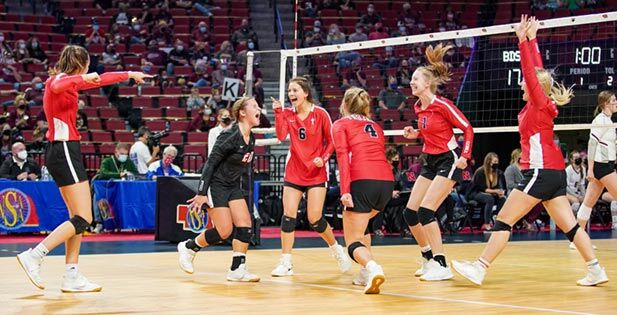 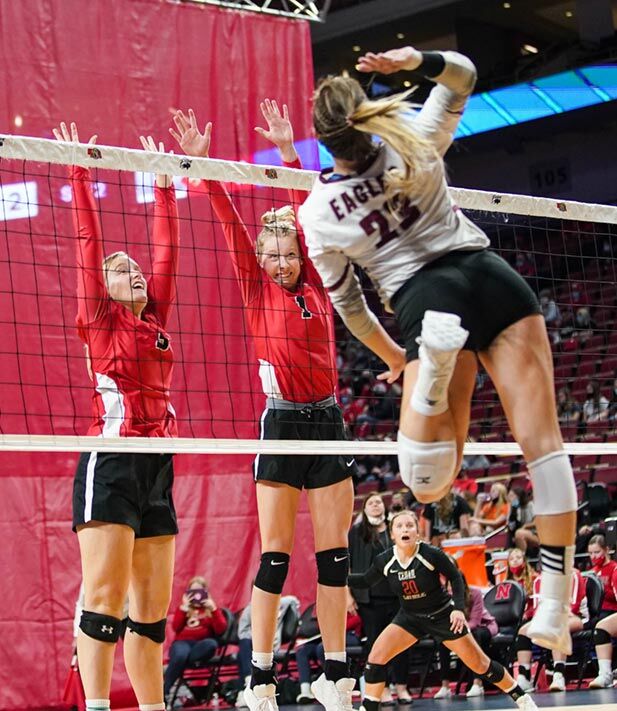 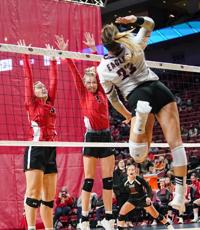 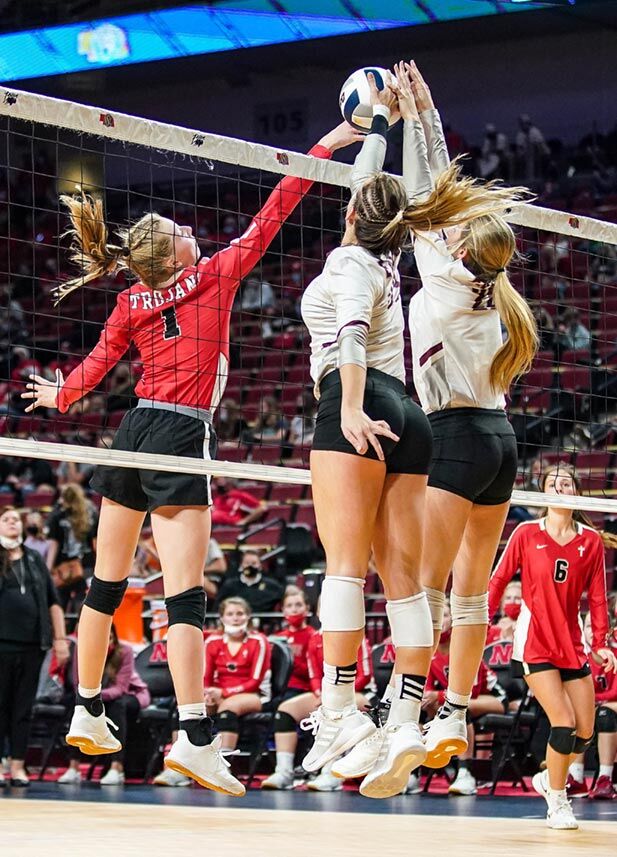 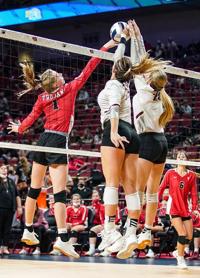 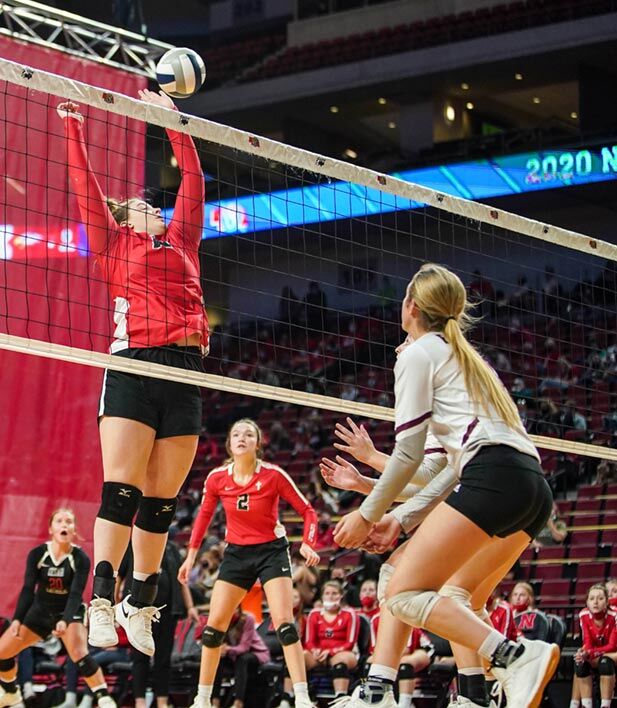 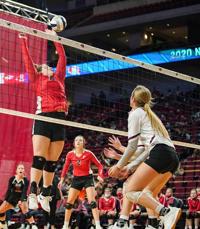 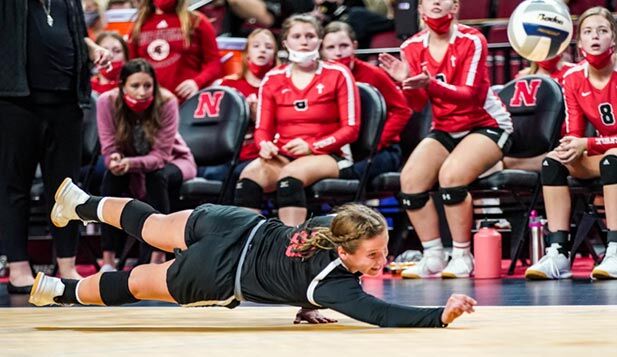 Megan Heimes from Hartington CC dives for the ball against BDS 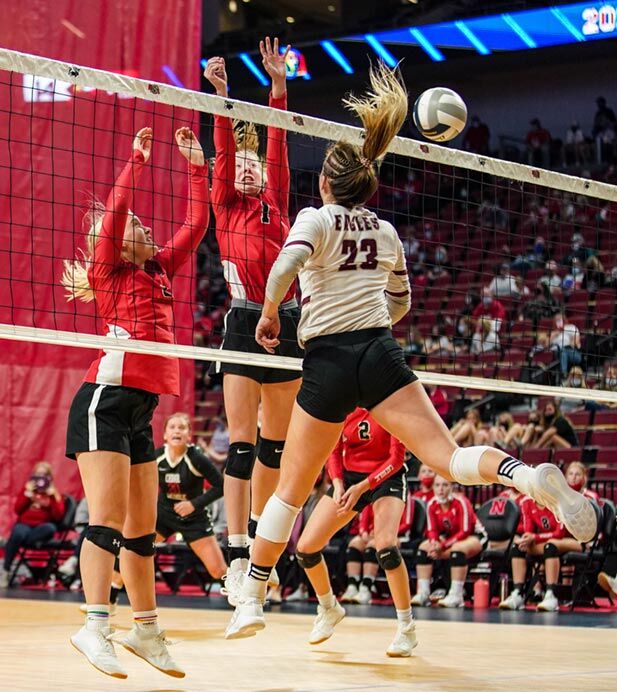 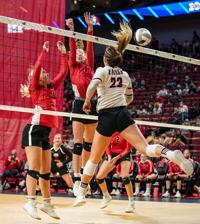 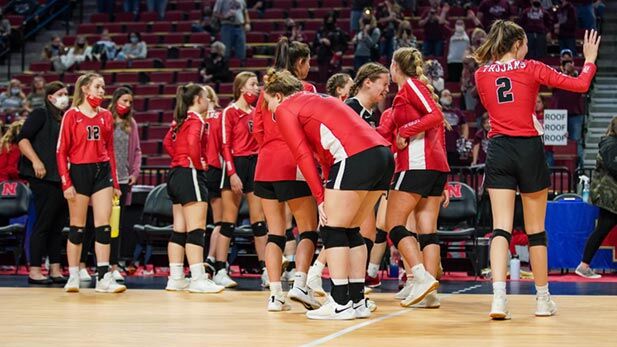 Megan Heimes from Hartington CC dives for the ball against BDS

LINCOLN — Bruning-Davenport/Shickley dropped the first set but rebounded for a 17-25, 25-17, 25-23, 25-18 victory over Hartington Cedar Catholic in the opening round of the Class D1 state tournament at Pinnacle Bank Arena on Thursday.

It was an interesting matchup between the two-time defending Class D2 state champions in BDS and a Cedar Catholic team that had played all but five matches this season against C1 and C2 competition.

"We knew that we had a really tough first-round draw," BDS coach Kari Jo Alfs said. "We've been working hard all week, more so mentally than physically, knowing we were coming in against a team that plays a lot of C1 and C2 schools, a very high-caliber team."

Cedar Catholic came out of the gate early. Brooklyn Kuehn's kill on a short set put the Trojans on top 4-3 and they never trailed the rest of the way. Back-to-back kills by Makenna Noecker closed the first set, 25-17.

"I was thinking, 'Man, we're ready to go,' " Cedar Catholic coach Denae Buss said. "But we knew they were smart. They've been here before, also. We knew something was going to change."

As Buss expected, the Eagles made adjustments and came out on fire in the second set. Mariah Sliva's ace serve put BDS on top 6-1.

"We got settled in and kind of took control," Alfs said. "The girls got a feel of the kind of ball they play. That made a huge difference. They run a very fast-tempo game."

Except for 1-0, Cedar Catholic did not lead in the second set as the Eagles evened the match with an identical 25-17 score.

The third set was the afternoon's most competitive. Neither side enjoyed more than a three-point advantage throughout.

Cedar Catholic took a 19-16 lead on a BDS service error, but the Eagles answered with a 6-0 run. Back-to-back kills by Jordan Bolte had the two-time defending D2 champs on top 22-19.

A Sliva kill gave BDS a set point at 24-21, but Cedar would not back down. A Cadyn Uttecht kill and Eagle attack error pulled the Trojans within 24-23, but Bolte sealed it for the maroon and black with a kill on the next point and a two-sets-to-one lead.

Cedar Catholic was its own worst enemy in the fourth set, committing a combined 12 service and attack errors.

But the red and white battled. Brynn Wortmann's kill pulled Cedar within one at 15-14 before the Eagles responded with a 4-1 run and were never really threatened again.

"That's why you play three out of five," Alfs said. "Dropping a first set, dropping a set here and there never really affects us. We're used to that. We're used to coming back."

Buss tipped her hat to the Eagles. "It's probably the best group of hitters we've seen in a while," she said. "They had weapons all over the floor, and they played really well."

Bruning-Davenport/Shickley will continue its quest for a third straight state championship on Friday morning at Pinnacle Bank Arena against traditional powerhouse Fremont Bergan.

Cedar Catholic closed its season with a record of 17-14.

Wortmann is among four Trojan seniors — Gracie Dickes, Brooklyn Kuehn and Megan Heimes are the others — who end their careers with four trips to the state tournament. "I know all of our seniors are proud with how far we got this year," she said. "We started off pretty rocky, and we're proud of how hard we worked."