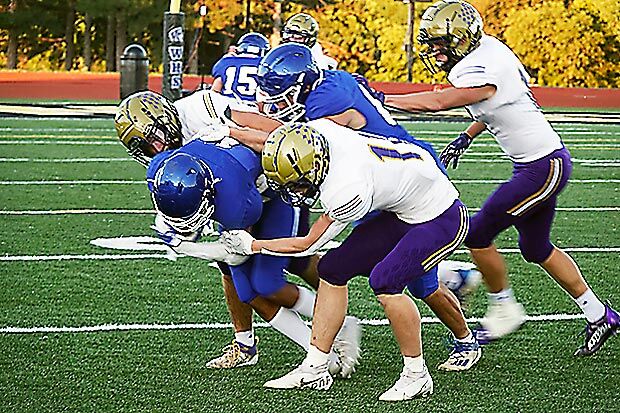 Landon Olson (behind) and Baron Buckendahl of Battle Creek combine to tackle Yair Alcantara of Wayne during Friday's game. 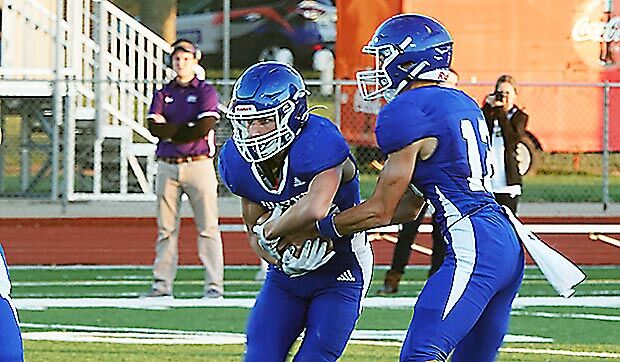 Brandon Bartos of Wayne takes the ball from Tanner Walling on Wayne's first drive of Friday's game against Battle Creek. 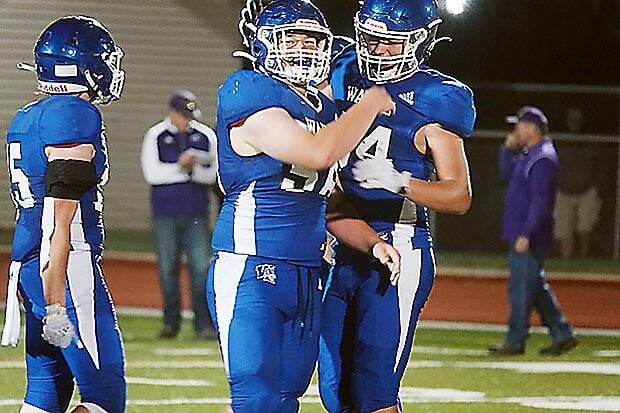 Brenden Swanson (left) and Daniel Judd of Wayne celebrate after the Blue Devils force a turnover on downs by the Battle Creek offense during the fourth quarter of Friday's game.

Landon Olson (behind) and Baron Buckendahl of Battle Creek combine to tackle Yair Alcantara of Wayne during Friday's game.

Brandon Bartos of Wayne takes the ball from Tanner Walling on Wayne's first drive of Friday's game against Battle Creek.

Brenden Swanson (left) and Daniel Judd of Wayne celebrate after the Blue Devils force a turnover on downs by the Battle Creek offense during the fourth quarter of Friday's game.

WAYNE — Just when it seemed like momentum had swung in favor of Battle Creek, host Wayne pushed the pendulum back.

After the Class C No. 3 Braves scored a touchdown and tying 2-point conversion to begin the second half, the host Blue Devils counterpunched with the lead-changing touchdown early in the fourth quarter that proved to be the difference in a 21-14 victory.

"I thought we responded well," Wayne coach Russ Plager said. "They scored their second touchdown, we went down and scored, and then that carried over into our defense. That was a big scoring drive."

Brandon Bartos scored his third touchdown of the night when he dodged a defender near the line of scrimmage, slid past another and scampered into the end zone with 9 minutes, 13 seconds remaining. It was his final points on a night in which he rushed for 117 yards and two touchdowns on 22 carries, and he also turned a short swing pass from quarterback Tanner Walling into a 30-yard receiving score.

"We knew this was going to be a hard game," Bartos said. "Battle Creek is always good. They're always physical. So, we came out, and we knew it was going to be a dogfight. After we got that (last) touchdown, it was a momentum getter."

From there, they turned it over to a defense that held Battle Creek to less than 100 rushing yards on the night. Braves quarterback Dylan Amick finished with more passing yards (167) than Walling (147), but the Blue Devils picked off two passes at crucial times and forced a pair of fourth-down stops in the fourth quarter to help seal the win.

"Our kids played really hard," Battle Creek coach Andrew Carlson said. "It's just things we have to clean up, and it starts with us as coaches. We have to make sure it's more of an emphasis than we already are, and try to get better."

Walling found a wide-open Yair Alcantara for a 36-yard gain that set up Bartos' first scoring run midway through the second quarter, and after an interception, Walling connected with Bartos on a short swing pass, and Bartos did the rest.

That lead could have been even bigger. The Blue Devils drove to inside the red zone on the first drive of the game, but fumbled on fourth-and-2. On its next drive, Wayne had second-and-1 inside the Battle Creek 30, but a penalty and lost yardage on a swing pass led to a punt.

Battle Creek eventually made them pay thanks to the passing game. Amick found Baron Buckendahl for an 11-yard gain on third-and-8, and on the next play, Kamren Lingenfelter got behind the defense for a 35-yard play down to the Wayne 11. With 36 seconds left in the half, Buckendahl's toe-tapping catch just beyond the goal line in front of the pylon was enough for a 9-yard touchdown.

In addition to that, Battle Creek also started the second half with the ball. The Braves took advantage, piecing together a 13-play, 69-yard drive that took the first 7:20 of the half and didn't end until the game was tied. Logan Roberts ran the ball on seven of those plays, including five straight starting with a fourth-and-2 conversion. Trent Uhlir slipped out of the backfield on a play-action pass and turned it into a 12-yard touchdown, and ran nearly the same play for a 2-point conversion to tie it at 14.

"We started fast, but then we didn't keep our feet on the gas pedal for a while," Plager said. "They're a good ball team, and they took advantage of that."

Battle Creek would have the ball three more times, but those drives resulted in a three-and-out, an interception on fourth down, and a sack on fourth down in the final minute.

"This was a game we talked about that would come down to turnovers and penalties," Carlson said, "and we lost in both of those categories."

O’NEILL — Ninth-seeded Elgin Public/Pope John didn’t get off to a good start in its Class D2 playoff game against O’Neill St. Mary’s on Thursday afternoon.

PLATTE CENTER — This Platte County community is hoping local kids can cool off on a splash pad in the near future.

The Norfolk Catholic volleyball team is coming off of a state championship appearance in 2020. Early in the season, the young Knights squad has seen contributions come from new faces from everywhere on the floor, including from a foreign exchange student.

With ax throwing, a golf simulator and more, the Boat House brings something new to downtown Norfolk.

KEARNEY — In what has become commonplace, if two years can be considered commonplace, Crofton's Jordyn Arens ran away from the field again at the 2021 Nebraska Class D Girls cross country race here at the Kearney Country Club on Friday afternoon.

NIOBRARA — The Elgin Public/Pope John Wolfpack staved off a late rally and dominated in the fifth set against the Elkhorn Valley Falcons to win the Niobrara Valley Conference tournament final 21-25, 25-19, 25-16, 14-25, 15-5 on Friday night.

While community members and students gathered for a ribbon-cutting ceremony Friday at Summerland School, it seemed only fitting that background music for the event was supplied by a combine spilling golden kernels of corn into a semi-trailer.

The Bulldogs of Humphrey/Lindsay Holy Family put an end to Lutheran High Northeast's undefeated season and knocked them out of the Class D1 playoffs in a 36-35 win on Thursday night at Memorial Field.

"You should probably be wearing a mask so you don't give anybody 'cat scratch fever.'"

Anne Vrbicky
was this week's winner.