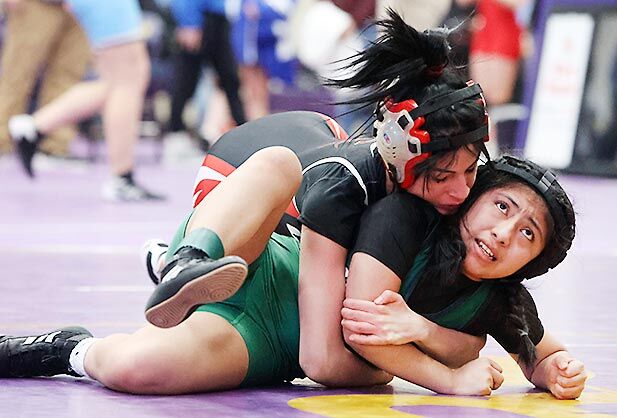 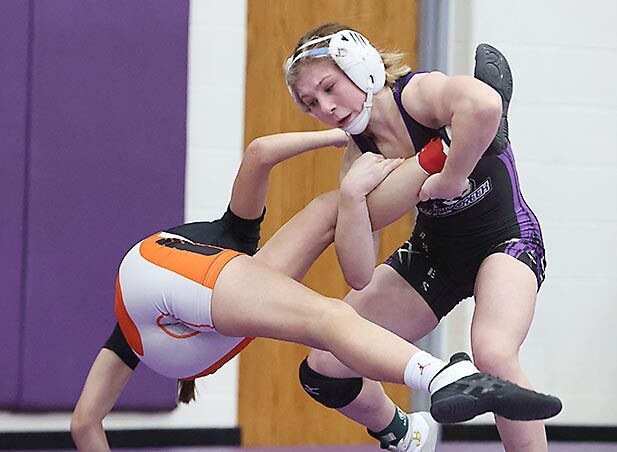 Afftynn Stusse of Battle Creek finishes a single-leg takedown against Stanton’s Arya Ericksen. Stusse is ranked second at 103 pounds among girls in Nebraska and regularly wrestles on the Braves’ boys squad as well.

Afftynn Stusse of Battle Creek finishes a single-leg takedown against Stanton’s Arya Ericksen. Stusse is ranked second at 103 pounds among girls in Nebraska and regularly wrestles on the Braves’ boys squad as well.

Blessen, a Malcolm native, was the first girl to qualify for the Nebraska boys state wrestling tournament in 2001. She wrestled Brett Hunter of Rushville in the first-ever two-gender matchup in state tournament history at the Bob Devaney Sports Center in Lincoln.

Three years after that, Taylor was the first girl to reach the medal stand at state, a feat she achieved twice while at Omaha North. She finished fifth at 103 pounds as a freshman in 2008, then followed it up with the first appearance in the finals by a girl, taking runner-up at the same weight class the next year.

For more than two decades, a handful of girls who wanted to participate in wrestling have gone through a lot to compete on a wrestling mat with the boys. Now, they have their own avenue in which to compete and, thanks to the NSAA approving girls wrestling as an emerging sport in the spring of 2020, are building a league of their own.

Northeast Nebraska has long been a trend-setter for the sport, and it's quickly establishing itself in the arena of girls wrestling as well, according to Ron Higdon, NSAA assistant director and wrestling director.

"The northeast part of the state is a hotbed and is really leading the pack from a numbers perspective when you look at schools like West Point-Beemer and Winnebago and Schuyler," he said.

And the growth from last year to this has been especially impressive when you consider the impact the coronavirus had on high school sports in the state.

"It's enough of a challenge to recruit kids to a sport when you don't have something like COVID, but we still went from 140 girls last year to 280 this year who have established a weight so that they can compete," he said.

Girls wrestling as its own sport was approved by the NSAA Board of Control last spring, offering a three-year window for the sport to grow. Despite all the challenges that have been put out there, Higdon said the sport is doing quite well and could become a full-fledged varsity sport sometime in the near future, joining a quickly expanding base of states that now offer girls wrestling as a varsity sport.

"If the interest continues to grow the way it has, we'll be able to have enough teams that we can establish a qualifying method and have a state tournament, and that process could start next year," Higdon said. "Three years ago, there were only six states with girls wrestling and now there are 29 and a bunch more that are in the conversation, so it's the fastest-growing sport per capita in all of high school sports."

Here in Northeast Nebraska, West Point-Beemer's program has probably had the longest experience with girls in the wrestling room and now has its own girls wrestling team, a process that took five years from the first time coach Ray Maxwell made a call to girls who might be interested in participating.

"We started with six girls that first year and had 22 last year," Maxwell said, noting that this year's numbers are down slightly with 14 Lady Cadets participating.

Numbers notwithstanding, the quality of competition in the Cadets' wrestling room — and in other girls wrestling programs across the state — has definitely come up.

"There is a lot more balance all across the state," Maxwell said. "Girls are figuring out the sport a lot quicker, and the quality of wrestling has increased. Even the new girls are figuring it out quicker and we as coaches are coaching it a lot more and the girls have kind of established a league of their own."

Battle Creek coach Cody Wintz has four girls in his wrestling room, and the biggest challenge for him as a coach is getting the girls enough time in the practice room to learn the sport and its variety of moves and situations.

"They need a lot of reps because most of them haven't done it before," he said. "They come to every practice we have and do everything the boys do, but they just need a lot more practice time at this point."

Creighton is one of the newer girls programs in the area. Coach Zac Kliment said the growth has come as a result of having girls compete in the community's youth program and coming from families with a wrestling background.

"We'd seen it growing around the state and had some girls in our youth program, so we floated the idea around and had four girls who wanted to give it a try and I'm proud of their effort," Kliment said. "We had one girl who had brothers wrestle, but the rest are pretty green and have been learning the fundamentals and improving from there."

The opportunity to compete in the sport was one that Battle Creek sophomore Afftynn Stusse needed to be convinced to try out, but she has turned out to be a natural at the sport even with no prior experience.

"When I was little, I'd go to practices that my dad (Ryan Stusse, a four-time state qualifier at Pierce in the late 1990s) coached and I got pinned by a bigger guy and said I'm done," she said. "I was going to go out for basketball but didn't really feel it and my dad and coach Wintz suggested I should wrestle, so I thought why not."

It's turned out to be a great move for the 103-pounder, who is ranked second among girls in the state and regularly competes as part of the boys varsity team.

"I was a little leery about doing that my first year, but it's been a real eye-opening experience and has helped me with my nerves and building confidence," she said. "Having more mat time like that has been a big help."

West Point-Beemer junior Brisa Figueroa has been involved in the sport for four years, following her older sister onto the team. Figuring it would help her stay in shape, it's turned into a sport she loves to compete in, and she has wrestled as part of the state's USA Wrestling team that competed in national tournaments in Iowa and Florida.

"At first it was a little intimidating because I didn't know what was going on, but I've learned a lot of new things and really enjoy it," she said. "I think every girl should go out for it, because it's a sport that teaches a lot of life lessons, and I've made so many friends from competing in it as well."

How long it will be before girls wrestling becomes an NSAA-sanctioned varsity sport is anybody's guess.

Maxwell was one of the proponents of making it an immediate varsity sport, as was the case with bowling last year.

"I think it should have been sanctioned right away," he said. "If you look at other states, every state that sanctioned it saw numbers explode. Kansas went from 185 to 500, Missouri went from 180 to 900 — we've still increased by 100 even with emerging status, so I hope they decide that was a good showing in a year where we had to deal with COVID."

Wintz said that having the sport start as an emerging sport would give everybody involved a chance to earn its spot among the sanctioned activities the NSAA offers.

"The NSAA isn't going to just add a sport with 100 competitors, so we're going to have to keep growing and earn our keep," he said. "There are a lot more girls in junior high wrestling now and there are more varsity teams starting up, so it's growing and it's coming and we'll have an opportunity to establish a standard set of rules for girls and be able to adjust to those changes."

Higdon said it's not a matter of if — but when — girls wrestling will be sanctioned.

"Wrestling is huge here in Big Ten country," he said. "I don't know if we can meet that status (for sanctioning) with less than 300 girls participating, but I think it's inevitable. I think it's a good thing for girls and for the sport, and it will happen in the next few years."