Barrett will devote herself to preserving the Constitution 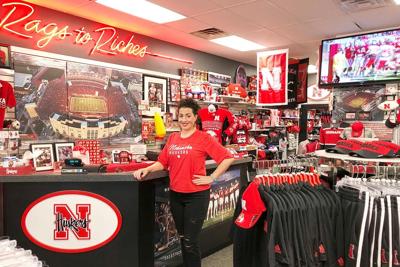 “Ecstatic” is the word Cammie Schlievert used to describe her feelings after hearing that the Huskers will be playing football yet this fall.

After canceling fall sports a month ago, Big Ten officials announced Wednesday that an eight-game football season would begin the weekend of Oct. 23, and the conference title game would be played Dec. 19.

“We’re very happy,” said Schlievert, who, along with her mother, Deb, owns and manages Rags to Riches, The Husker Place in Norfolk. The store, located on Market Place in Norfolk, sells Husker clothing and memorabilia.

After having to shorten the store’s hours during the height of the COVID-19 crisis, Schlievert said she was disappointed when the Big Ten announced its member schools wouldn’t be playing sports this fall.

Especially, Schlievert said, since the Huskers were supposed to play four home games in September. Home games translate into sales of Husker clothing. While the September games won’t happen, some part of the football season hopefully will be salvaged.

Still, she said, football this fall is more than economics. Football, she said “unites the state. It’s a way of life in Nebraska.”

Plus, considering the way the pandemic has disrupted lives, it’s nice to have something “normal” happening, she said, even if it means football being played in empty stadiums, as is the case with some professional teams.

Whether football was going to be played has been a “topic of conversation,” Henery said.

Bars and restaurants are often gathering places for Husker fans who like to watch them on the giant TVs surrounded by fellow Husker faithful.

Typically, Henery said, groups of people gather at his facilities to do just that, especially after the weather gets cold and they don’t want to travel to Lincoln and tailgate in the parking lot or sit in the stadium.

Having football “can’t hurt” business, he said, especially with crowds at stadiums limited to players’ families.

“It’s always good news when the Huskers play,” she said.

Norfolk’s newest community bank didn’t expect to open during a pandemic, but business at the modern two-story facility has been strong despite COVID-19 challenges.

A former Norfolk resident’s book about life on the home front during World War II is the 2021 One Book One Nebraska selection.

PIERCE — Katherine Steinkamp couldn’t make the phone call fast enough when she saw the costume shop in Pierce go up for sale.

O’NEILL — To say Nick and Rhea Rider took a leap of faith is a bit of an understatement.

HARTINGTON — Two teams literally divided by a street came together for a subdistrict final here Tuesday night at the Monsignor Werner Activity Center.

Life is just fine at the AirBnB

Our AirBnB gets a break for a couple weeks this month which means we get a break from cleaning it.