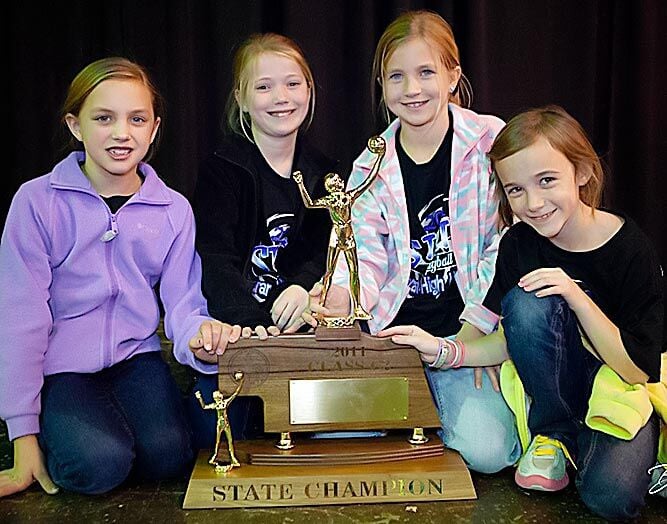 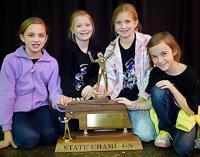 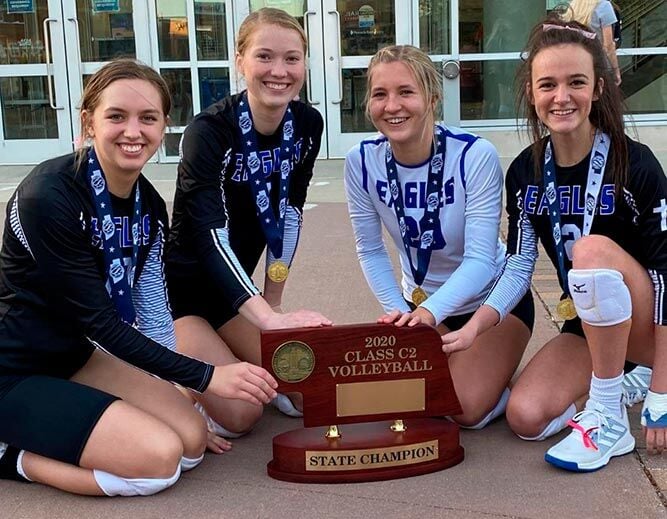 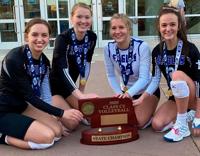 LINCOLN — Back in August, Kurt Bockelman and I were visiting about the upcoming volleyball season. Kurt's daughter Amber is a junior defensive specialist for Lutheran High Northeast.

He told me that he'd looked on the Nebraska School Activities Association website and seen that last year's Class C2 state champion, Grand Island Central Catholic, and runner-up, Hastings St. Cecilia, had moved up to Class C1 and that Norfolk Catholic had dropped from C1 to C2.

Although I don't pretend to be an expert on volleyball programs in Northeast Nebraska, let alone the rest of the state, after looking at the list of the 55 schools and co-ops that had been assigned to Class C2 for 2020, only two really jumped off the page. Both Kurt and I agreed, a Lutheran High vs. Norfolk Catholic state championship match was a real possibility.

With all of its top players back from the 2019 team that finished third in Class C2, Lutheran High looked to be the favorite. And with a mix of seniors who had been starting or playing a lot for three years and a talented group of freshmen and sophomores, Norfolk Catholic appeared to have the ingredients for major success as well.

As you know by now, the two Norfolk programs shined in the statewide spotlight on Saturday with Lutheran High coming from two sets down to defeat Norfolk Catholic 19-25, 25-27, 25-19, 25-18, 15-4 to win the C2 state title. Both teams performed admirably.

How rare is it for two teams from the same community — other than Omaha or Lincoln — to play one another for a state championship? I could find only three examples, all involving Wahoo and Bishop Neumann. The two schools played for the girls state basketball championship in 2010 and for boys state titles in 2014 and 2017.

Schools in Columbus, Grand Island Hastings, Hartington, Humphrey and David City have, over the years, had teams in the same classes, but to my knowledge, Wahoo was the only town able to claim the distinction of having two of its teams play each other for a state title. Until Saturday.

After the match at Pinnacle Bank Arena on Saturday, I was with a group of media members waiting to interview Norfolk Catholic coach Michaela Bellar. Mike Patterson of the Omaha World-Herald asked me if the people from the two schools get along.

Patterson told me, "I was just wondering, because at Wahoo, a lot of those people don't care for each other at all."

Fortunately, that's not the case in Norfolk, a fact driven home during an NSAA-staged press conference after the match with winning coach Kathy Gebhardt and players Chloe Spence, Becca Gebhardt and Halle Berner.

Kathy Gebhardt told the assembled scribes and broadcasters, "Our girls are friends with a lot of their girls. We actually co-op for soccer so they actually play together, some of them. It's always tough to compete with them. We love to compete with them, and then, we don't.

"They're always great competition, and they always battle us well. They're just a super team and how awesome that we're all from Norfolk and here (in the state championship) together."

Becca Gebhardt said of herself, Spence and Berner, "We three were actually on the same club team with Mary Fennessy (of Norfolk Catholic). So, we know them pretty well. Honestly, we hang out with them sometimes on Friday nights. So, we're actually very close and we know every one of their names and so, it's kind of weird to play them, but it's just another game when you get on that court."

A CHAMPIONSHIP OF THEIR OWN

Becca Gebhardt, Chloe Spence, Halle Berner and Maddie Becker were there to wipe up the sweat off the floor as well as make sure the team had plenty of towels and water.

"We were always going to their practices and games and were watching them get everything done, using their gifts and talents to the best of their abilities," Berner said. "We just wanted to be like them, and now we've had our time, too. It's like a dream come true."

Bernie Auten snapped a shot of the quartet of 8-year-olds posing with the state championship trophy in 2011 and re-staged it with the same four girls and the 2020 hardware outside Pinnacle Bank Arena on Saturday.

State championship trophies have had the same basic look for nearly 50 years. Schools across the state proudly display the mementos for excellence front-and-center in their trophy cases.

They include the wooden outline of the state of Nebraska with the NSAA logo and two statuettes of players representing the various sports.

Earlier versions came with a 2-inch medal sporting the NSAA logo in North Central Nebraska. More recent editions have the NSAA logo doubled in size and stamped in the Nebraska Panhandle.

The new look eliminates the statuettes all together, and the NSAA logo is again a medal but the same size as the stamped version and in the same location.

You can take a look at the difference in the photos of the four girls and give the new version a thumbs up or thumbs down.

Each of the four days of the state volleyball tournament began with a solo rendition of the national anthem by high school students from across the state, and two of the four singers for this year's tourney hailed from Northeast Nebraska.

Avery Cheatum of Orchard opened matches on Thursday while Jayden Fuchs of Winside honored America before the first serves of Friday's matches.

Cheatum and Fuchs, as well as the two other students, were selected among more than 100 auditions.

Media row at the state volleyball tournament is becoming increasingly like the state basketball tournament, especially with the number of radio stations providing play-by-play broadcasts of the matches.

A color commentator from a station covering the Norfolk Catholic-Superior match told me she was surprised a Norfolk station wasn't covering the match.

Volleyball is a difficult sport to call play-by-play for because it's so fast-moving, but John Baylor has been masterfully describing University of Nebraska matches for 26 seasons, and sportscasters for more than a dozen stations from all over the state — including West Point and O'Neill — provided real-time accounts of the state tournament matches to fans back home and all over the world.

With both Lutheran High Northeast and Norfolk Catholic performing so well this year, perhaps it's time for one or both of the Norfolk radio groups to consider covering the sport with play-by-play broadcasts in the future.

Three of Class C2's final four competed in the C2-6 subdistrict at Lutheran High Northeast. The Eagles won the late-October tournament with a four-set victory over Norfolk Catholic. The night before, in the semifinals, the Knights swept the state's eventual fourth-place team, Clarkson/Leigh.

As sophomores, they came up one match short of qualifying for the state tournament. As juniors, they rebounded from a state semifinal loss to finish third and, as seniors, they left Pinnacle Bank Arena with the championship trophy.

"We knew this was the last time we'd be playing together, so, we knew that we wanted to end on a win, and that helped push us through to the end," Gebhardt said. "We've been together since third grade. We've been looking up to our sisters and so, it feels great."

The cupboard won't be bare for Lutheran High next year. The Eagles will be able to build around talented juniors Mia Furst, Lauren Buhrman and Amber Bockelman, as well as freshman Kendra Peterson.

On the other side of the net, when Michaela Bellar accepted the head coaching position at her alma mater in the fall of 2018, she was only five years removed from her days as a star player for Norfolk Catholic.

But the school's volleyball program had hit hard times. The Knights won just seven matches in 2017 and hadn't had a winning season since 2014. Among the group to show up for the coach's first practice were six sophomores.

"They mean a lot to me," Bellar said. "They were kind of my fresh meat when I came in and Anna (Neuhalfen), Mary (Fennessy) Carly (Marshall), Taylor (Kautz), Hope (Brummer) and Riley (Schlomer) kind of just stuck with me, and they've done a great job of doing what I've asked them to do."

Bellar's first team finished 13-16 but was among the best in the area by the end of the season. The 2019 Knights qualified for the state tournament, losing in the first round and, this year, the 2020 seniors led the way to a state runner-up finish.

"Those seniors played a lot of big roles, but the future's bright for us," Bellar said. The 2021 version of the Knights will feature current sophomores Channatee Robles and Addison Corr, freshmen Avery Yosten and Allison Brungardt and juniors Elly and Jozy Piper.

"Hopefully, this experience of being down here gets them hungry for more for next year," Bellar said.