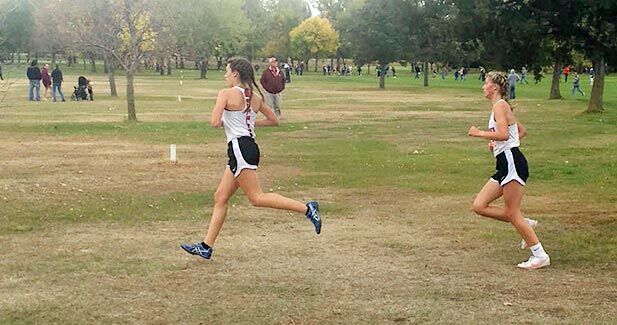 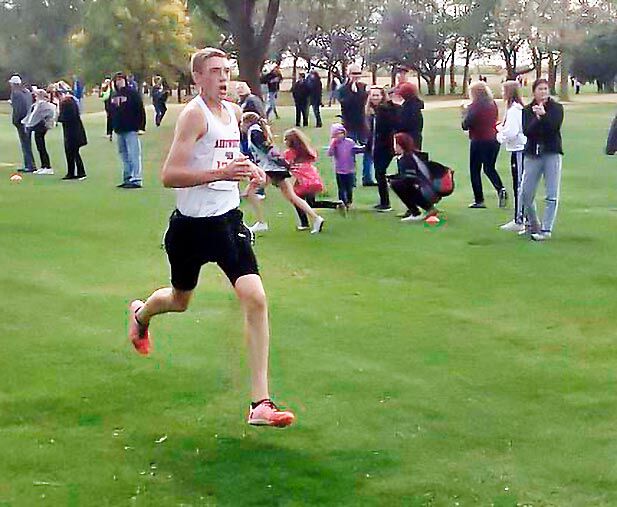 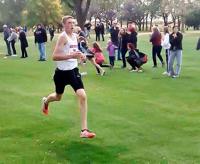 AINSWORTH — The Ainsworth girls and the Tilden Elkhorn Valley boys won the D-3 district cross country championships here at the Ainsworth Public Golf Course on Thursday as the teams prepare for next week's Nebraska State Cross Country Championships at the Kearney Country Club in Kearney.

"It was great to host the district again,"Ainsworth coach Jared Hansmeyer "It gives our runners a chance to show off the hard work they have done over the past year."

The Falcons surprised some people with their district title in the boys race, including their coach, Janet Rood.

"I was hoping we'd get in the top three to qualify the whole team," Rood said. "I figured we could get in the top five for sure, but for our guys to come here and win this thing was great — everyone ran very, very well here today."

Although the team race was a bit of a surprise, the individual winner didn't surprise anyone.

Ty Schlueter of Ainsworth ran away from Raden Orton of North Central to win his second consecutive district title in a time of 16 minutes, 45.8 seconds on his home course.

"It really is great to run here at home," Schlueter said. "It just gives you an extra step to go out there and compete."

Schlueter was the runner-up in Kearney last season as a junior and placed seventh as a sophomore.

"He's been our leader the past couple of years," Hansmeyer said. "He shows his teammates how hard work pays off in the end."

The Bulldog leader put in more than 500 miles over the summer in preparation for his senior campaign.

“I helped on the  ranch all summer," Schlueter said. "I would get up at 6:45 in the morning and put in 7 to 10 miles — then I would work cattle, head to the hay fields, whatever we were doing at the time."

His teammate, Trey Appelt, who finished 11th, attributed his success to Schlueter's example and Ainsworth's tradition.

"We expect to be good around here," Appelt said. "But we also know what it takes to be good — it takes work and not just in the fall."

"We have had a lot of great runners come through here in the boys and the girls programs," Hansmeyer said. "Success just feeds itself, but our kids understand you have to earn the success. No one is going to hand it to you."

Atkinson West Holt took the third team spot for Kearney to edge out Osmond 31 to 34.

"We came really close to getting our team down there," said Osmond coach Joe Ortmeier. "We got a couple of individuals so we get to keep practicing for another week."

Orton of North Central and teammate Mason Hagan were second and third, respectively, Gavin Geneski of Osmond was fourth and Waylon Warneke of team champion Elkhorn Valley rounded out the top five.

In the girls race, Ainsworth outlasted North Central 16-21, paced by the district medalist and runner-up.

"It's just amazing to get to run this meet here at home," Kerrigan said. "We really wanted to go out there and do our best today."

Although only a freshman, Kennedy gave credit to Kerrigan, the Bulldog program and her Hokas — the brand of shoes she wears while running.

"She (Kerrigan) is so helpful in practice and telling all of us about the meets we are running in," Kennedy said. "We are expected to put in the work and we do it — and I love my Hokas."

West Holt's Madison Davis was third individually, Daisy Frick of North Central was fourth and Jymmie Jensen of Burwell made the top five.

Neligh-Oakdale — paced by Raina Le, who placed 12th — grabbed the final team ticket to Kearney and finished with three runners in the top 15.

The 2021 Nebraska State Cross Country Meet is set for Friday, Oct. 22, at the Kearney Country Club.

The meet starts with the Class D girls at noon while the Class D boys are scheduled to hit the course at 1 p.m.