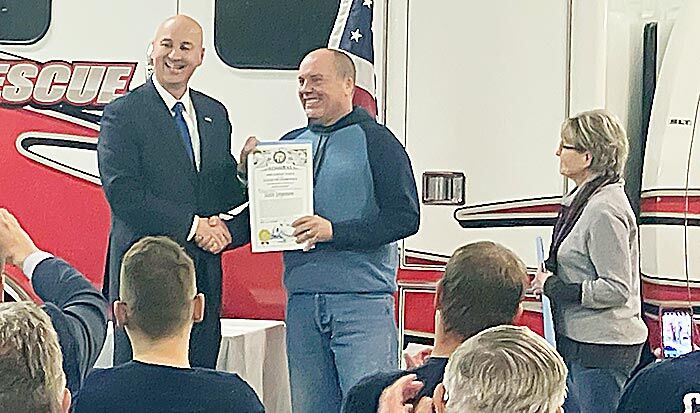 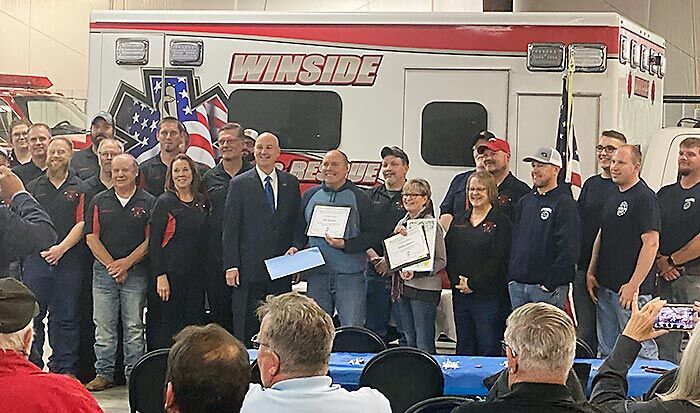 GOV. RICKETTS also recognized the Winside Volunteer Fire Department and its mutual aid partners for their work in putting out a house fire on July 3.

GOV. RICKETTS also recognized the Winside Volunteer Fire Department and its mutual aid partners for their work in putting out a house fire on July 3.

WINSIDE — A pair of Winside residents whose actions likely saved the lives of three people during a July 3 house fire were honored Tuesday night at the Winside Volunteer Fire Department for their bravery.

Steve and Michele Jorgensen, who are responsible for helping three people escape a burning house, were honored as Nebraska Navy admirals by Gov. Pete Ricketts in front of a packed crowd of volunteer firefighters from numerous agencies. The governor also presented the two with U.S. Department of Homeland Security challenge coins for the lifesaving measures they took.

“I want to honor Steve and Michele for their heroism,” Ricketts said. “Because without their actions, (the outcome) would have been a lot worse.”

At about 3 a.m. on July 3, the Winside Volunteer Fire Department was dispatched to 409 Vroman St. in Winside after receiving reports of a house fire. Upon arrival, firefighters found the entire east (front) side of the home engulfed in flames, said Don Skokan, Winside’s fire chief.

Nobody was in the house when emergency personnel arrived, Skokan said. Mutual aid from Hoskins and Wayne also had arrived on scene, where crews worked to extinguish the fire for almost 3½ hours.

Personnel had left the scene at about 6:20 a.m., Skokan said, but they were dispatched again about an hour later to address an array of hot spots. After leaving the scene a second time, dispatch again paged fire crews at about 8:30 a.m. The fire had reignited and was engulfing the front of the house.

At that point, Skokan said, a plethora of mutual aid partners were called in from various volunteer fire departments in Northeast Nebraska. Eight departments responded to the scene and worked the fire until about 12:50 p.m.

“Firefighters were tired. You can’t say enough about the help we got from our mutual aid partners and everybody who was involved,” Skokan said.

BEFORE FIRE personnel had arrived, the Jorgensens, who live less than a block south of the fire scene, awoke and noticed flames nearby.

Steve Jorgensen initially thought somebody had started a large bonfire, but soon after he realized the seriousness of the situation and called 911. Clad in a T-shirt, shorts and flip flops, Steve ran toward the burning house alongside Michele.

The couple didn’t know if anyone was inside the home at the time, but they neared the blaze anyway. The front side of the home was engulfed in flames, so there wasn’t an immediately available entry into the home.

Steve then ran between two separate houses so that he could access the south side of the burning home. The area immediately surrounding the house was so hot at that point, Skokan said, that the siding on the house next to it had started to melt.

But despite the presence of heavy smoke and intense heat, Steve found an entry into the backside of the house and repeatedly knocked on the door, but he got no answer. The back door was unlocked at the time, so Steve entered the home and started yelling to gain the attention of anyone who might have been inside.

After encountering a dog, Steve located a woman and a child walking through the house and told them they needed to get out. By then, the fire had begun working its way from the front porch into the living room. The woman indicated that there was another child in a bedroom toward the front of the home.

Steve’s bravery showed no limits. He ran past the fire, picked up the child in the bedroom and carried her outside.

The owners of the house weren’t home at the time, but their daughter, then 24, was house sitting and supervising two children, then ages 5 and 16 months, and a dog.

“We talked about this afterward several times, and we truly believe that had it not been for (the Jorgensens’) actions, it would have been a terrible outcome,” Skokan said.

After detailing the events of July 3, Skokan introduced Ricketts, who commended the Jorgensens for their fearlessness. The governor said the pair’s actions epitomize the “togetherness and great spirit” of Nebraskans.

“Their heroism demonstrates the great spirit of Nebraska. You saw this in the 2019 floods, and you saw this throughout the course of the pandemic — how Nebraskans take care of each other,” Ricketts said. “Here is an example of Nebraskans who were not only looking out for their neighbors, but chose to take heroic measures.”

“It wasn’t just us. This was an entire community working together,” she said.

Ricketts also acknowledged each of the volunteer firefighters in attendance Tuesday night. The governor said it’s important to recognize the heroism of those who volunteer to take part in life-preserving work.

“These are citizens who volunteer to protect their fellow associates. They have regular day jobs, and they do this in the spur of the moment — whether it’s a car crash, medical emergency or fire,” the governor said. “They come to the aid of their fellow citizens, and that’s the definition of heroism.”

U.S. Rep. Jeff Fortenberry is asking that his federal trial, for allegedly lying to federal agents, be moved from California to Nebraska.

Ahead of Olympics, abrupt lockdowns loom over Beijing life

BEIJING (AP) — Beijing residents are coping with abrupt local lockdowns and sweeping COVID-19 testing requirements as the Chinese capital seeks to prevent a coronavirus outbreak ahead of the Winter Olympics that opens in less than two weeks.

US orders 8,500 troops on heightened alert amid Russia worry

BATTLE CREEK — For the second time this month, a company shared plans with the public about a proposed carbon pipeline that would cross Madison County.

BRUSSELS (AP) — Tensions soared Monday between Russia and the West over concerns that Moscow is planning to invade Ukraine, with NATO outlining potential troop and ship deployments, Britain saying it would withdraw some diplomats from Kyiv, and Ireland denouncing upcoming Russian war games o…

The Bill and Melinda Gates Foundation announced Wednesday it will add four members to its board of trustees, a first for the Seattle-based philanthropic giant whose decision making has been guided by very few hands since its incorporation in 2000.

In one small prairie town, two warring visions of America

BENSON, Minn. (AP) — The newspaper hit the front porches of the wind-scarred prairie town on a Thursday afternoon: Coronavirus numbers were spiking in the farming communities of western Minnesota.

With 192 lasers and temperatures more than three times hotter than the center of the sun, scientists hit — at least for a fraction of a second — a key milestone on the long road toward nearly pollution-free fusion energy.

Russia sees little optimism in US response on Ukraine crisis

MOSCOW (AP) — The U.S. rejection of Russia’s main demands to resolve the crisis over Ukraine…

In one small prairie town, two warring visions of America

BENSON, Minn. (AP) — The newspaper hit the front porches of the wind-scarred prairie town on…

BEIJING (AP) — For the thousands of athletes, journalists and others descending on Beijing f…

CAPE CANAVERAL, Fla. (AP) — He told his family and a few friends. He dropped hints to a coup…