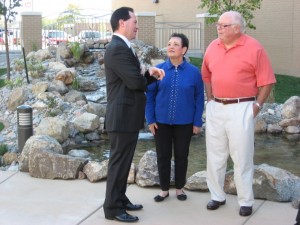 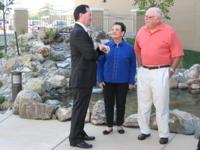 Jim Sinek (from left), president and chief executive officer of Faith Regional Health Services in Norfolk, speaks with Helen and Jim Bradford Jr. during a gathering at the Bradford Family Spiritual Garden on Thursday. 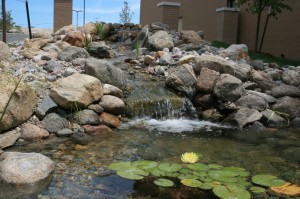 A waterfall, stream and pond were added to the Bradford Family Spiritual Garden at Faith Regional Health Services in Norfolk.

Jim Sinek (from left), president and chief executive officer of Faith Regional Health Services in Norfolk, speaks with Helen and Jim Bradford Jr. during a gathering at the Bradford Family Spiritual Garden on Thursday.

A waterfall, stream and pond were added to the Bradford Family Spiritual Garden at Faith Regional Health Services in Norfolk.

Healing through peace and tranquillity.

Faith Regional Health Services incorporated those elements by commissioning two gardens — the Bradford Spiritual Garden and the Virg and Betty Froehlich Family Garden — in 2010. The gardens are available to patients, visitors and employees for relaxation, reflection and meditation.

The Froehlich garden is located outside the hospital’s intensive care unit family waiting room and features a waterfall and stream.

The Bradford garden, located outside the first floor lobby of the bed tower, featured a labyrinth.

But now it offers even more.

Jim Bradford Jr. said he and his mother, JoAnn, felt like something was missing from the spiritual garden. They wanted to incorporate a water feature to add another element of peace and tranquillity. A fountain was suggested, but that didn’t seem like a good fit.

Bradford kept exploring possibilities until he visited Indra Unique Pond Designs of Clarkson. The company is owned by Dale and Laurie Indra.

“They’ve got the godzilla of ponds on their farm. It’s just gorgeous,” Bradford said during a gathering at the garden on Thursday. “I said, ‘I just have to have one of those.’ ”

Work began in May of this year, with the Indras putting in hours of work to add a waterfall, stream, pond and rocks.

“It’s very therapeutic,” Laurie Indra said. “There is spiritual healing with the water.”

The pond contains 16 koi fish, which also is calming.

“Watching the fish is a natural stress reliever,” she said. “When we put a pond in, we put it in like it’s going in our backyard.”

In addition, a fence was added to the spiritual garden, which allows access only from the inside of the building. The fence gate is locked from the outside to increase security at the hospital.

“The garden is named in honor of my parents,” Bradford added. “My mother is a deeply spiritual person. The garden and the new enhancements seemed like a perfect fit.”

The enhancements to the spiritual garden were completed in September.

Sinek said without the partnership with the Bradford family, the opportunity to create the spiritual garden wouldn’t exist.

Bradford said he and his family were glad to be a part of it.

“If everybody would give a little something toward whatever trips their trigger, it would a better town for all of us,” Bradford said. “It’s a nice thing for our community. That’s what this is all about — our town, our area.”

The Santa experience this year is a mix of laps, distancing

NEW YORK (AP) — Santa is back this year, but he pleads caution as he continues to tiptoe through the pandemic.

Deadline Tuesday for nominating persons of the year

The deadline is looming for submitting nominations of deserving individuals to be considered for the 2021 Norfolk Area Persons of the Year.

Survivor found in coal mine accident in Russia's Siberia

MOSCOW (AP) — Rescue crews have found a survivor in a Siberian coal mine where dozens of miners are presumed dead after a devastating methane explosion, a senior regional official said on Friday.

WASHINGTON (AP) — The number of Americans applying for unemployment benefits plummeted last week to the lowest level in more than half a century, another sign that the U.S. job market is rebounding rapidly from last year's coronavirus recession.

For more than 20 years, a line of German shepherds named Gunther has been presented in news stories as the wealthy beneficiaries of a German countess.

A Norfolk woman was killed in a Thanksgiving Day accident on Highway 81 late Thursday night.

NEW YORK (AP) — Retailers are expected to usher in the unofficial start to the holiday shopping season Friday with bigger crowds than last year in a closer step toward normalcy. But the fallout from the pandemic continues to weigh on businesses and shoppers' minds.

Survivor found in coal mine accident in Russia's Siberia

What is this new COVID variant in South Africa?

LONDON (AP) — WHAT IS THIS NEW COVID-19 VARIANT IN SOUTH AFRICA?

BRUSSELS (AP) — A slew of nations moved to stop air travel from southern Africa on Friday, a…

"Another tribute wall for one of our friends. Giving thanks that once again it was a white turkey!"