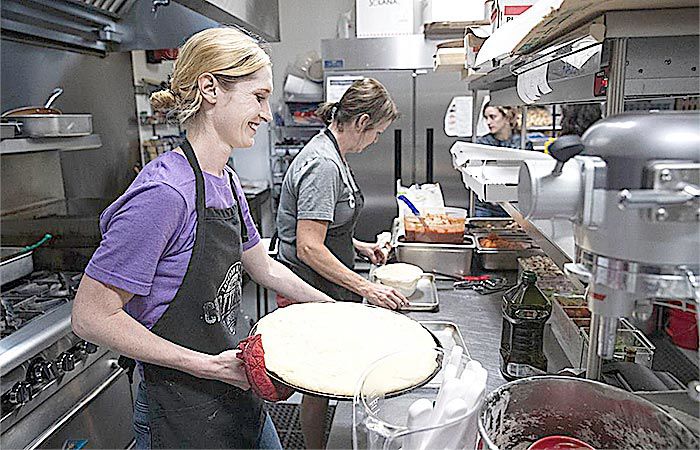 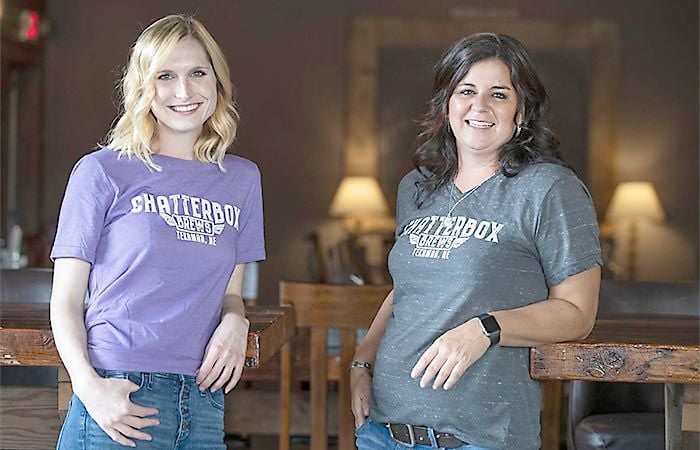 TEKAMAH, Neb. — After living and working in New York City, Britney Hansen and Cindy Chatt each moved back to their Burt County hometown with the same goal in mind: open their own business.

Trouble was, they barely knew each other.

But the small-town grapevine being what it is, Hansen and Chatt soon met and discovered they had a similar dream. A partnership was born.

Now, a year later, their Chatterbox Brews restaurant and bar has become an award-winning gathering spot in Tekamah, a farm town about 35 miles north of Omaha. It also hosts a new farmers market in town and is a site for school fundraisers, reunions and receptions.

It’s brought new energy to a main street that has seen its share of empty storefronts, the two entrepreneurs said.

“We wanted to do something different that would help our hometown,” said Chatt, who worked in marketing research in New York City. “If we were in Omaha, we’d just be another bar. Here, we can make a difference.”

Hansen, who had event management experience and worked in advertising in New York, said the goal was to create a place that combined big-town style with small-town charm.

The expansive eatery is filled with wood repurposed from an aging corn crib that was torn down on the Chatt family farm. The wood became tables and the Chatterbox’s indoor and outdoor bars. The wood was also used as paneling. Beams were exposed, and numerous windows allow plenty of natural light.

The place has several photographs of a World War II bomber called the Chatterbox, which gave the bar its name. The plane was piloted by Cindy Chatt’s late grandfather, Maj. Bob Chatt.

Out back is a patio/playground that has an artificial turf area for playing cornhole, Spikeball and bocce ball, as well as flowers and outdoor seating for dining and gatherings. The area, the owners said, used to be a tangle of weeds and graffiti.

The head of the Nebraska Main Street program said that the repurposed wood and the transformation from eyesore to showplace is what led judges from her organization to recognize the Chatterbox. It was honored for the best adaptive reuse of a historic building and was named one of five businesses of the year from among the roughly 20 communities involved in the Main Street project.

“Our overall goal in Nebraska is to help these communities reoccupy vacant buildings and put them back in use to generate jobs and business, as well as build community pride,” said Elizabeth Chase, executive director of the Nebraska Main Street Network. Tekamah, she added, just joined the Main Street program a year ago.

“This place is awesome,” said Tekamah resident Lisa Anderson as she sat at the bar last week. “The atmosphere ... the people who come in here. It’s all great.”

Chatt said that her father always told her to keep an eye on the one-story brick building at the junction of U.S. 75 and Nebraska 32, on Tekamah’s main street. It’s a great location, he told her. The building, which dates back to 1877, most recently was used for storage, but in the past it had been a boat repair shop, an Oldsmobile dealership, and a place where some of the first plows in the area were sold.

Chatt, 39, had already drafted a business plan by the time she met Hansen, 31.

It took one conversation. Things just kind of clicked, said Hansen, who runs the kitchen while Chatt runs the bar.

One big-city Chatterbox feature: unisex restrooms, which are referred to as “thinking rooms.”

The owners said that has taken some adjustment for local customers. In the meantime, though, it’s provided some entertainment for patrons sitting at the bar, who watch people walk down the hallway toward the restrooms to see if they figure it out.

“One kid shouted out, ‘There’s no bathrooms here, only thinking rooms,’ ” Hansen said.

Agenda for upcoming board of education meeting

The public is encouraged to attend an upcoming meeting of Norfolk Public Schools during which administrators will consider option enrollment and construction bids.

WASHINGTON (AP) — From a secure room in the Capitol on Jan. 6, as rioters pummeled police and vandalized the building, Vice President Mike Pence tried to assert control. In an urgent phone call to the acting defense secretary, he issued a startling demand.

After Amazon: Labor tries to regroup in wake of Alabama loss

WASHINGTON (AP) — Despite the strongest public support and the most sympathetic president in years, the American labor movement just suffered a stinging defeat -- again.

Senate filibuster’s racist past fuels arguments for its end

WASHINGTON (AP) — Once obscure, the Senate filibuster is coming under fresh scrutiny not only because of the enormous power it gives a single senator to halt President Joe Biden’s agenda, but as a tool historically used for racism.

LONDON (AP) — Military teams across the U.K. and on ships at sea fired 41-gun salutes Saturday to mark the death of Prince Philip, honoring the former naval officer and husband of Queen Elizabeth II who they considered one of their own.

LONDON (AP) — As many as 60 countries, including some of the world’s poorest, might be stalled at the first shots of their coronavirus vaccinations because nearly all deliveries through the global program intended to help them are blocked until as late as June.

Nurse, capturing the feeling of a nation, gets stuck in mud

BOSTON (AP) — Camille Coelho just wanted to take a stroll on the beach and look for some sea glass. Instead, the Massachusetts nurse ended up feeling the way so many have felt during the pandemic: she was stuck in the mud.

There are more opportunities to get the COVID-19 vaccine.

WASHINGTON (AP) — From a secure room in the Capitol on Jan. 6, as rioters pummeled police an…

After Amazon: Labor tries to regroup in wake of Alabama loss

Senate filibuster’s racist past fuels arguments for its end

WASHINGTON (AP) — Once obscure, the Senate filibuster is coming under fresh scrutiny not onl…

LONDON (AP) — Military teams across the U.K. and on ships at sea fired 41-gun salutes Saturd…

Nurse, capturing the feeling of a nation, gets stuck in mud