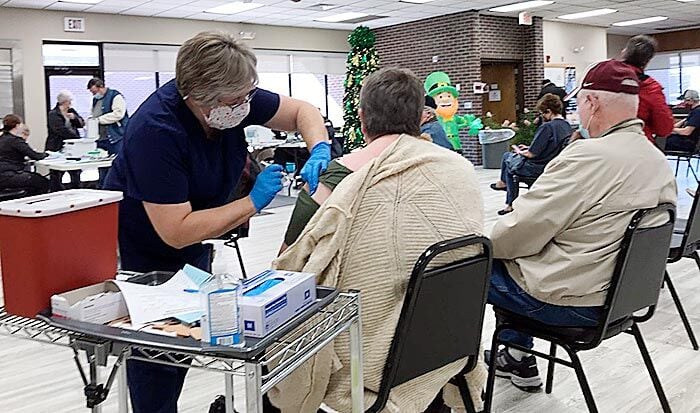 THE NORFOLK SENIOR CENTER was a busy place Wednesday morning as COVID-19 vaccinations were offered. 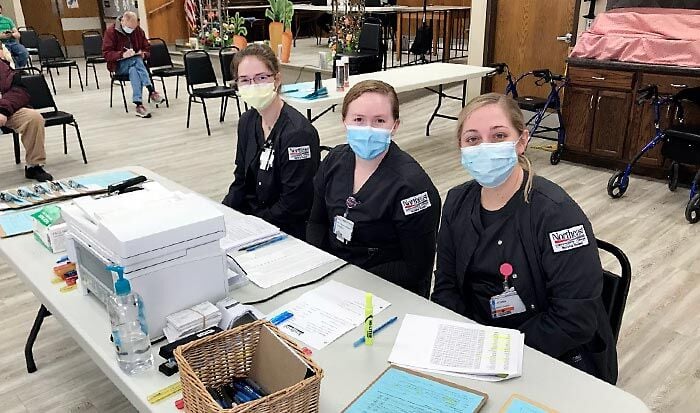 NURSING STUDENTS assisted with the vaccinations on Wednesday.

THE NORFOLK SENIOR CENTER was a busy place Wednesday morning as COVID-19 vaccinations were offered.

NURSING STUDENTS assisted with the vaccinations on Wednesday.

Nebraska has received its first shipments of Johnson & Johnson’s coronavirus vaccine after the FDA granted the company emergency use authorization last week.

The approval of the one-time shot has given Nebraska a third tool in fighting the pandemic. The state has been allotted 15,000 Johnson & Johnson vaccine doses this week, Gov. Pete Ricketts said in a Wednesday press conference.

The governor said there would be a “few-week gap” between Johnson & Johnson shipments, but more doses are expected to arrive toward the end of the month.

Meanwhile, Moderna and Pfizer will continue to ship weekly doses to Nebraska.

Angie Ling, incident commander for the Nebraska Department of Health and Human Services, said the state was allocated 23,400 Pfizer doses and 19,000 Moderna doses this week.

Because of delays in vaccine shipments last month, Nebraska has received three weeks’ worth of doses in the past 10 days, Ling said. More than 78,000 doses have been administered statewide in that time frame.

As of Wednesday, Nebraska had been allocated a total of 594,745 doses since December, with 447,849 (75.3%) of those having been administered, according to the DHHS. The 447,000 doses administered has moved Nebraska from 45th in the U.S. to 18th in total shots administered, Ricketts said.

Nebraska soon will be able to transition into Phase 2 of vaccine distribution, the governor said, and the state will continue with a similar distribution approach with regard to underlying health conditions.

“Age is the number one contributor and has the biggest correlation to risk of hospitalization and death,” Ricketts said. “As we get into Phase 2, we are going to continue to prioritize by age.”

Ninety percent of the Phase 2 inoculation focus will be directed toward 50- to 64-year-olds, Ricketts said, and the remaining 10% of Phase 2 vaccines will be set aside for individuals with comorbidities.

Local health directors and doctors are being tasked with concocting a system during Phase 2 to get shots into arms of those with comorbidities.

The governor also encouraged Nebraskans to register for a vaccination regardless of which distribution phase they fall under. Because local health department signups didn't always include questions about health risks, residents should register with the state to provide that information, he said.

NEW YORK (AP) — Although weddings and other big celebrations are going back on the calendar in the U.S., business owners who make those events happen expect a slow recovery from the impact of COVID-19.

Outdoor enthusiasts to get cash, free passes to move to West Virgina

A red flag warning was issued last month for most of Nebraska as high winds with gusts up to 60 miles per hour and higher than average temperatures were predicted throughout the state.

HUMPHREY — After heavy rains in March, Humphrey city maintenance workers drove out to the landfill and were greeted by a scene of tree branches thrown over the locked gate on the inside of the landfill.

The Norfolk Lions Club’s 61st annual pancake feed offered both a restaurant-style experience, as well as a new drive-thru option.

A Kansas man was arrested on suspicion of possessing meth after police found him asleep at the wheel in the parking lot of a local business.

YANKTON, S.D. (AP) — With anticipated continued drought, flooding likely won’t be an issue this year in the upper Missouri River basin, according to the U.S. Army Corps of Engineers and other federal officials.

WAYNE — Wayne State College has a number of band and vocal concerts scheduled for the rest of April.

BROOKLYN CENTER, Minn. (AP) — A Black man died after being shot by police in a Minneapolis s…

Outdoor enthusiasts to get cash, free passes to move to West Virgina