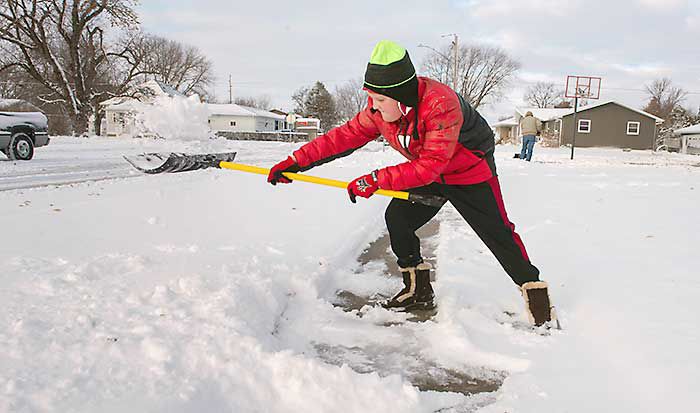 Jack McHugh, 9, of Edmond, Oklahoma shovels snow at his grandparents home on Prospect Ave. in Norfolk. McHugh sees little to no snow in Oklahoma. 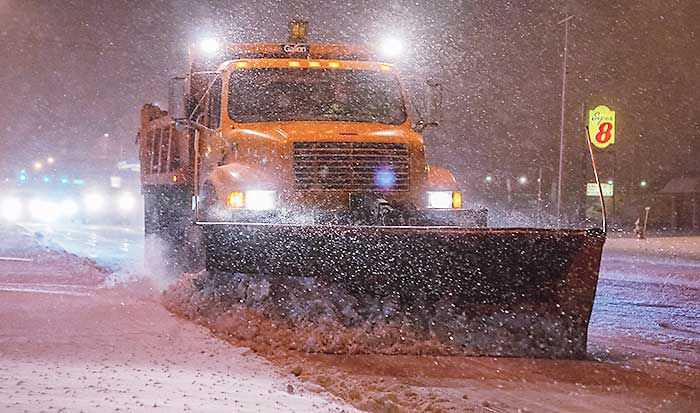 A SNOW PLOW works to clear snow on Omaha Avenue.

Jack McHugh, 9, of Edmond, Oklahoma shovels snow at his grandparents home on Prospect Ave. in Norfolk. McHugh sees little to no snow in Oklahoma.

A SNOW PLOW works to clear snow on Omaha Avenue.

The World-Herald News Service contributed to this story.

Northeast Nebraskans woke up to a winter wonderland a day before Thanksgiving.

The winter storm that was set to move through the area on Tuesday eventually delivered on the snow and wind it had been expected to bring.

In Norfolk, 0.43 inches of precipitation resulted in 6 inches of new snow while winds shifted from the north to the northwest and gusted as high as 44 mph overnight, according to the National Weather Service.

Six inches of snow seemed to be the norm across the area as weather reporters in Newman Grove, Neligh and 14 miles southeast of Norfolk all reported that amount had fallen during the storm. Officially, the National Weather Service recorded 6 1/2 inches at the Norfolk Regional Airport.

Creighton resident Norm Doerr said the 6 inches received in his neck of the woods came with a lot of wind, but the weight of the snow seemed to keep the drifting in check.

“The snow seemed to be really heavy, so it didn’t blow that much,” he said.

In Woodland Park, Jim Bahm reporter 7.5 inches. In Pierce, Gary Zimmer 0.32 inches of precipitation that resulted in 5.7 inches of snow.

More snow and a wintry mix of precipitation is expected throughout Thanksgiving and the following weekend, but new snow accumulation likely will be light as highs in the area reach into the upper 30s and lower 40s.

The highly anticipated snowstorm — which already had been predicted throughout Sunday and Monday — finally arrived Tuesday afternoon in Norfolk, leaving a wet heavy mess of snow and some slick streets.

In anticipation of the forecast that had called for up to a foot of snow — depending on the forecaster — many schools and businesses canceled classes or let out work early Tuesday ahead of the Thanksgiving break, extending Thanksgiving vacation for Norfolk and some area students, including colleges.

The result was all things considered, it was a relatively quiet storm with fewer than usual accidents. Flurries began to fall in the Norfolk area about noon Tuesday, but melted initially. It wasn’t until about 3 p.m. that the snow began to accumulate on Norfolk streets.

Jason Hansen, street maintenance supervisor, said city street crews were out in Norfolk at 6 p.m. with salters, and plows going out by 7 p.m. They initially concentrated on snow emergency routes, working until 2 a.m. Wednesday.

At 2 a.m., new crews came in and they continued to work through the night and morning, attacking the downtown, residential areas and other streets, Hansen said.

Because it was a wet, heavy snow, there were some issues with slick streets and parking lots.

“It was almost like a March snow, heavy and dense,” Hansen said. “And underground it is wet, so it freezes and we were dealing with some slick issues. It feels like a spring snow.”

The City of Norfolk had declared a snow emergency that went into effect on Tuesday. Norfolk police could be seen in some areas ahead of the plows, asking people Tuesday evening to move their parked cars from the odd side of the street.

Hansen said for the most part, crews did get cooperation from the public with parking, which enables crews to work faster and safer.

“We appreciate the patience of the public,” Hansen said. “We try and do our best and due diligence to make it safe for the (public to travel on streets safely).”

Norfolk Mayor Josh Moenning said he consulted with Andy Colvin, city administrator, about the time to get crews out and stay ahead of the storm.

Moenning said snow removal reforms the city made in the last year a half have helped. With staggered operations such as those Tuesday, plows were already working at 7 p.m. Then at 2 a.m., they were relieved by another crew that continued to work throughout Tuesday morning.

The staggered crews help to avoid a situation where the snow gets packed down by vehicles before plows can get out, he said.

“It was one of those early storms where it didn’t turn out as heavy as we thought it might,” Moenning said. “I think it has been helpful in having crews out earlier and having crews work around the clock.”

THE POWERFUL winter storms have roiled the outset of the nation’s busiest travel holiday, but a respite — of sorts — is coming before another system strikes at the end of the week.

About 30% of flights at Denver International Airport were canceled Monday night into Tuesday as about a foot of snow fell in the region.

In the northwestern U.S., winds of 70 to 85 mph accompanied Tuesday’s landfall of a bomb cyclone that downed trees and ushered in heavy snow.

In Nebraska, the first major winter storm of the season sharply curtailed travel on Interstate 80. As of 10:30 p.m. Tuesday, Interstate 80 was closed from Kearney to York in both directions.

Most of the state’s roads were partially to fully covered with snow, and only far southeast Nebraska’s roads were clear.

Freezing rain, heavy snow, strong winds and reduced visibility were among the conditions drivers faced, according to the National Weather Service.

Crews from the Nebraska Department of Transportation were out in force clearing roads across the state. However, as night fell and winds picked up, some had to pull off the road due to poor visibility.

Grand Island and Hastings set records for snowfall Tuesday. Cities in the eastern part of the state fared much better.

Grand Island received 8.2 inches of snow, breaking the previous mark for the date of 4.9 inches, which was set in 1978. Hastings recorded 7.1 inches of snow, eclipsing the 4 inches that fell in 1944.

Cliff Cole, a meteorologist with the National Weather Service office in North Platte, said Wednesday that the central Nebraska cities were recipients of "a second wave of snow" that blew out of Denver. North Platte reported 7 inches of snow, just shy of the record of 7.2 set in 1919.

"The first wave of snow went through Cheyenne (Wyoming) and into the (Nebraska) Panhandle," Cole said. "We have unofficial reports of 12 inches of snow in Kimball."

Eastern Nebraska got off easy, according to meteorologist Hallie Bova of the Nebraska Weather Service office in Valley. Eppley Airfield in Omaha reported less a half inch of snow, mostly sleet, with Valley recording 1.9 inches.

"Farther north, Norfolk unofficially had 6 inches while there were reports of 9 inches in Verdigre and 10 inches in Newman Grove," Bova said. "There was a sharp gradient (downward) as the storm moved east."

In Omaha, thunder and lightning punctuated the storm Tuesday evening, producing “thundersnow.” Overnight winds were expected to gust between 40 and 50 mph as a low pressure system passed by.

Wednesday is expected to be dry in eastern Nebraska, with a high temperature of 32 in Omaha, Bova said. A "wintry mix" is forecast for the Omaha area on Thanksgiving Day, with small amounts of snow accumulation.

"Of course, anything on a high travel day can cause problems," Bova said.

Cole said meteorologists are keeping a sharp eye on a larger storm forming in the western U.S. That storm could punish the Nebraska Panhandle with winds gusting "close to 65 mph," he said.

"It will bring precipitation Thursday and Friday," he said. "The snow will probably go through South Dakota and northern Nebraska."

Wednesday could bring some sunshine in the afternoon, and winds are forecast to die down, but snowfall could return Thursday and rain on Friday.

Strong winds and a rain-snow mix are forecast for this weekend as the remnants of the West Coast bomb cyclone move through the region, said Danielle Knittle, a meteorologist with AccuWeather Inc.

The powerful storm isn’t expected to generate flooding, as occurred in March when another bomb cyclone unleashed Nebraska’s costliest disaster on record, she said. However, it will affect weather across the country.

BEIJING (AP) — China's leader on Saturday called the accelerating spread of a new virus a grave situation, as cities from the outbreak's epicenter in central China to Hong Kong scrambled to contain an illness that has infected more than 1,200 people and killed 41.

DES MOINES, Iowa (AP) — Freed momentarily from the Senate's impeachment trial, several presidential candidates high-tailed it to Iowa on Saturday for a last-minute blitz of campaigning before the state's caucuses kick off the battle for the Democratic nomination.

A man's body was found inside a home at 512 Blaine St. in Norfolk after a fire at the residence Friday.

Students from across Nebraska met with Gov. Pete Ricketts earlier this week to celebrate their success in the December “Find Your Genius” challenge and discuss the future of the state’s workforce.

HUMPHREY — Four bids were received to build the proposed restricted-crossing U-turn (RCUT) at the Highway 81/91 intersection.

WASHINGTON (AP) — Democratic House prosecutors made an expansive case at Donald Trump’s impeachment trial that he abused power like no other president in history, swept up by a “completely bogus” Ukraine theory pushed by attorney Rudy Giuliani.