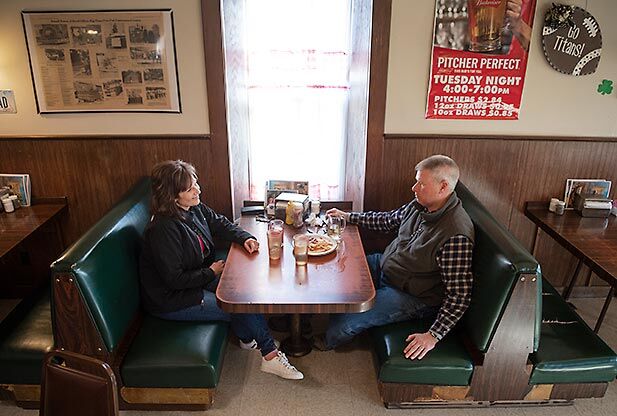 Lori and Kevin Barber of Fairbury enjoy a dinner Friday, March 20, 2020, at the Pioneers Inn restaurant in Gilead. 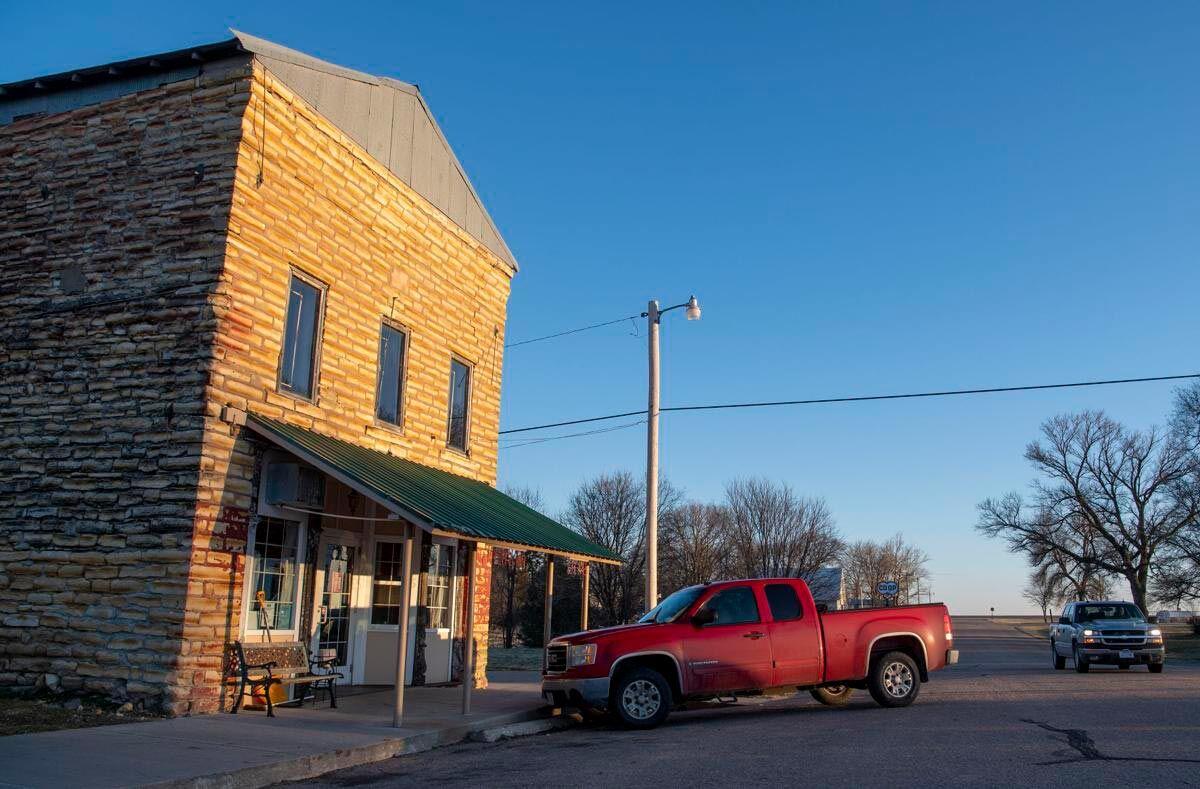 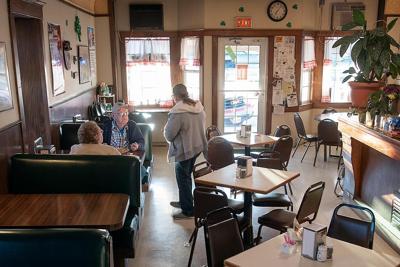 The owner of the Pioneers Inn was trying to make sense of what the earliest coronavirus-related restrictions would mean to Gilead’s only restaurant.

Occupancy limits had all but closed her dining room, she was cutting the hours of her dozen employees, and she’d been forced to cancel her Sunday buffets; her broasted chicken used to draw more than 100 customers, doubling the town’s population.

By the third week of March, the restaurant she’d owned for 35 years was making just half the money it had made before. At the time — and this was before she started finding envelopes of cash in her car — Keilwitz didn’t know if business would get worse before it got better, or if it would ever get better.

She had company around the state. That week, the Journal Star spoke with bar, restaurant and store owners from some of Nebraska’s smallest communities; in most cases, they owned the only places in their towns to buy a meal, a drink or a loaf of bread.

They were anxious. They were trying to adjust. Most were compliant, though at least one was defiant. But they all felt the pressure of trying to stay open to serve their communities.

Last week, the Journal Star caught up with most of them to see how the rest of their year had unfolded.

Palisade’s Sodtown Sundries used to offer it all, as the town’s only market, restaurant and bar.

But early in the pandemic, its co-owners closed their dine- and drink-in options, focusing solely on providing groceries to the community on the Hitchcock and Hayes county line, about 250 miles southwest of Lincoln.

And that’s what the town needed. Business has been brisk, said co-owner Missy Blackman. Even after shifting the restaurant and bar staff to the store, she had to hire two additional employees to keep up.

“We’ve been busy. Owning a grocery store during a pandemic is something I was never prepared for.”

It’s not like her customers are stocking up on canned food, cleaning supplies and toilet paper, she said. But fewer of them are traveling the half-hour to McCook for supplies.

“They started shopping local, and they must be happy with what we’re doing. That’s awesome for our little town.”

Sodtown Sundries adapted. It offers carryout and pickup options, and it will deliver to those who have COVID-19 or aren’t comfortable coming into the store, including a loyal base of senior customers.

“They usually order once a week. If we don’t hear from them, we call or check on them somehow to make sure they’re doing OK.”

Blackman and her business partner survived their own cases of COVID-19 in October. She’s better now, she said, but it’s not something she’d want to experience again.

So they made the decision to keep their town’s only restaurant and bar closed, because they want to keep their grocery shoppers healthy.

“I don’t want to have someone sitting in my bar and having a few drinks, and then find out they spread it to half the community. We’ll wait until it’s safe. The money isn’t worth the risk.”

After a slow start, business eventually picked back up at Red’s in Mullen, in the heart of the Sandhills.

In March, owner Helen Neumeyer was still seeing familiar faces coming in for breakfast, lunch and dinner, but she wasn’t feeding as many strangers traveling Nebraska 2.

That seemed to change with the seasons. “It’s been a pretty good year. In the summertime, we were fairly busy. A lot of people were coming around and going down the river.”

Mullen is a launch point for Loup River float trips, and it became a destination for people trying to break their cases of coronavirus cabin fever, Neumeyer said.

“The feeling I got is they were wanting to get out, wanting to do something, and being outdoors seemed like a pretty good idea.”

In March, she was frustrated by the lack of clear direction from the state, she said, and their TV news comes from Colorado. That never really changed throughout the year, she said.

“We don’t know what the governor says. So we hope for the best and we do our normal cleaning and people are pretty good about not coming in if they’re sick.”

The Longhorn Saloon Bar and Grill in Harrison struggled this spring, when it was nearly shut down by virus restrictions.

Owner Becky Law kept the doors open by herself, though not many people were coming through them for carryout. She likely would have closed without the Paycheck Protection Program, she said.

“I didn’t have work for anybody,” she said. “I was the only one who was here.”

And even when she could put a limited number of people at tables, business didn’t improve. At least not at first. She struggled for another month.

“They didn’t know for sure I was open. I could only have so many people in here, and they couldn’t sit at the bar.”

But business is better than it was a year ago, she said. In large part because the town’s other restaurant closed; now, if those living in the state’s far-northwest corner want someone else to cook for them, they have no choice but the Longhorn.

And in part because restrictions have eased. Locals can sit at the bar again, and she can fill more tables.

But not all of her customers follow the few rules that remain.

In Gilead, about 90 miles southwest of Lincoln in Thayer County, the Pioneers Inn has survived with ample amounts of Lysol and loyalty.

Keilwitz cleans like crazy, and she never had to close her restaurant because of the coronavirus, she said.

She had to make hard choices, though, like laying off five part-time employees, though she hopes to hire them back eventually.

But she learned she wasn’t alone in her efforts to save her business. “We had some people determined to keep me open, no matter what.”

A group of regular coffee-drinkers that no longer felt comfortable drinking coffee together would still pool their money, and she’d find about $40 in her unlocked van every week.

She hasn’t rebounded fully yet. Her buffet remains closed, and though Hamburger Thursdays are still popular, most customers order them for takeout.

But the donations and the Paycheck Protection Program helped keep the Pioneers Inn open. She can seat 70 people in her dining room now, instead of the original limit of 10, and her restaurant’s future is clearer now than it was in March.

“It would be a ghost town without it,” she said. “I’m going to keep it going, you betcha.”

SAN JUAN, Puerto Rico (AP) — The Caribbean is hunting for visitors and vaccines to jump-start the stalled economy in one of the world’s most tourism-dependent regions.

A Norfolk woman was arrested Monday for her suspected involvement in a burglary last month.

Nebraska has filed a 97-page lawsuit against the Mead ethanol plant operated by AltEn after it refused for years to clean up tons of waste that pose a hazard to the local environment.

Carbon monoxide would be stored underground in North Dakota

BISMARCK, N.D. (AP) — An Iowa company is leading a $2 billion effort to capture carbon monoxide from Midwestern ethanol plants and pipe it to North Dakota where it would be buried deep underground.

Siren testing to begin next month in Norfolk

The testing of the City of Norfolk's outdoor warning siren system will begin Tuesday, April 6, at 9 a.m. The Region 11 emergency management team will test on the first and third Tuesdays of April, May, June, July, August and September.

COLUMBUS, Ohio (AP) — With the floodgates set to open on another round of unemployment aid, states are being hammered with a new wave of fraud as they scramble to update security systems and block scammers who already have siphoned billions of dollars from pandemic-related jobless programs.

SAN JUAN, Puerto Rico (AP) — The Caribbean is hunting for visitors and vaccines to jump-star…

COLUMBUS, Ohio (AP) — With the floodgates set to open on another round of unemployment aid, …

WASHINGTON (AP) — Democrats’ hopes of including a minimum wage increase in their $1.9 trilli…

Victims of anti-Asian attacks reflect a year into pandemic

Nearly a year after they were almost stabbed to death inside a Midland, Texas, Sam’s Club, B…

Carbon monoxide would be stored underground in North Dakota